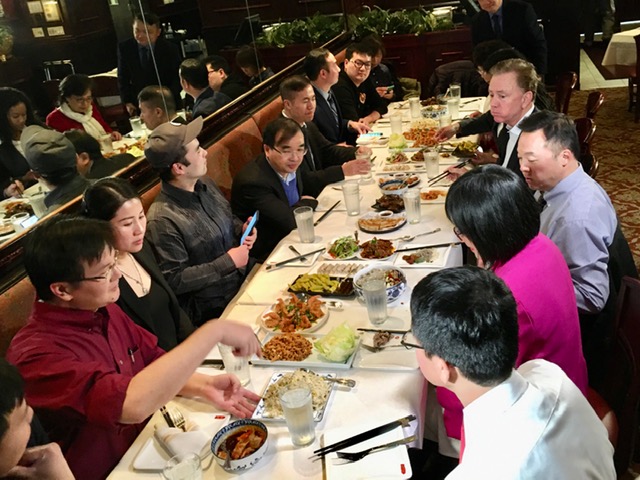 Gov. Ned Lamont and A.G. William Tong, upper right, dining out at Shu in West Hartford. It was a meal with a message. Photo credit: Mark Pazniokas, CTMirror.org

Gov. Ned Lamont and Attorney General William Tong dined out Tuesday at Shu, a Szechuan restaurant in West Hartford that Tong calls one of his favorites. It’s an assessment shared by hundreds of Yelp reviewers who give it an average rating of four stars out of five.

Tong recommended the dumplings. Wielding chopsticks, Lamont tried a bit of everything. They sat at a long table with Chinese restaurant owners, a convivial scene.

Behind the smiles are a concern. Business is down at some of their restaurants, and they fear it is a consequence of an irrational connection some Americans are making between the coronavirus and anything and anyone Chinese.

“I can tell you there are businesses here that are off right now – 10, 20, 30 percent,” Tong said. “And 30 percent, that’s life and death. That’s survival. And these folks are working incredibly hard to make it through this very difficult period.”

Shu is owned by a married couple, Chef Xinyu Huang and Sally Zhu. Huang is from Chengdu, the capital of Sichaun, a region Americanized as Szechuan. They own several restaurants, including Shu in Fairfield and Song in West Hartford Center.

Tong knows the life. He is the son of Chinese immigrants. They met working at a Chinese restaurant in Bloomfield, his father a cook and his mother a waitress. They eventually owned their own place in Wethersfield, where he and his three sisters worked on their way to other lives.

(Incidentally, a much-reported poll indicating that Americans were shunning Corona beer has been debunked as misleading. Constellation Brands, the owner of Corona, says sales are fine, even if the internet rumors are annoying.)

But the coronavirus is real and has arrived in New England. It was carried by visitors returning to Rhode Island from a school trip to Italy, not China. But the virus, COVID-19, originated in Wuhan, China, and Chinese-American restauranteurs are paying a price.

Containing the virus means isolating travelers from affected areas, and the Centers for Disease Control did not warn Rhode Island to check the health of the chaperones and kids returning from Italy.

According to WPRI-TV, an Italian-American congressman, David Cicilline of Rhode Island, wrote the CDC, asking why.

“Currently, states are only notified and provided with lists of travelers returning from China, where COVID-19 originated,” Cicilline wrote. “COVID-19 has now spread to 58 countries and it will likely continue to appear in more countries in the weeks and months ahead.”

There are no reported cases in Connecticut, but public health officials say COVID-19 is sure to arrive, as would any strain of the flu. Lamont and Tong said rational precautions are hand washing and staying home if you fall ill.

In the meantime, consider eating out, they said.

Lamont and Tong talked generally at first about what’s behind the slow business at Chinese restaurants, speaking of a general fear about being out in public. They eventually got around to talking about xenophobia, discrimination and ignorance.

“Just because the virus originated in Wuhan, China has nothing to do with what’s going on here in the United States,” Lamont said. “It’s also in Iran. It also originated in Italy and some other places right now. So, it’s really important to separate those two. This virus doesn’t discriminate, and neither should we.”

Shari Cantor, the mayor of West Hartford, joined them at the restaurant, a small place in a strip mall off New Britain Avenue, a few blocks over the city line from Hartford. They talked some more to reporters, amused diners looking on.

“Sorry to interrupt your dinner,” Lamont said, turning to one table.

Then the governor and attorney general sat down to eat with restaurant owners and a leader of an Asian-American business association. A variety of small dishes sat ready. Sally Zhu thanked them for coming.