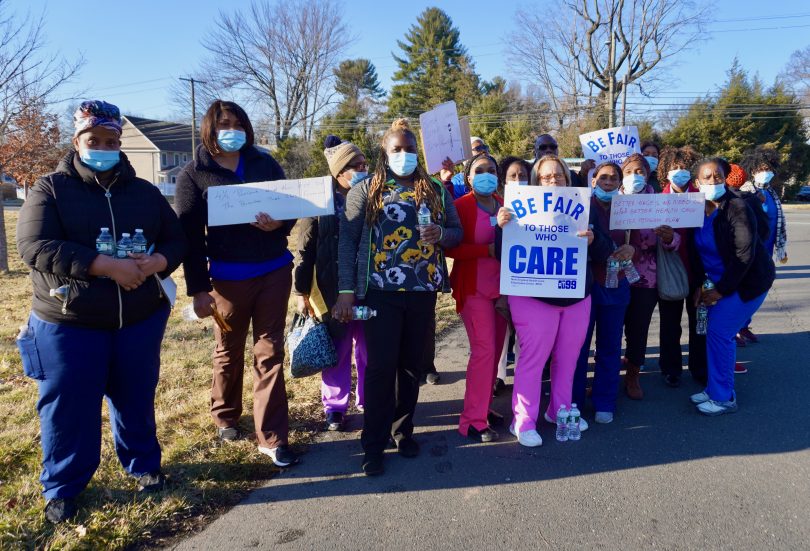 About 60 members of SEIU 1199 New England, employees of Saint Mary Home, held a rally outside the Albany Avenue entrance Wednesday afternoon to draw attention to their wage and benefit requests.

Jesse Martin, vice president of SEIU 1199, said that while the union has been able to enhance benefits for many caregivers and other health care workers across Connecticut, and in 2021 successfully settled contracts with more than 50 nursing homes in the state that have agreed to pay their certified nursing assistants at least $20 per hour and their dietary, housekeeping, and laundry workers at least $18.50 per hour, Saint Mary Home – which is operated by Trinity Health Senior Communities – has proposed a wage of just $15.96, less than a dollar above minimum wage.

While other nursing homes across the state have agreed to grant the now federally-recognized Juneteenth holiday to their employees, that benefit is not being provided to the roughly 160 Saint Mary Home workers, more than 80% of whom are Black or brown.

“They have struggled tremendously during this pandemic,” Martin said. “But in our current negotiations with Saint Mary Home they have refused to meet those standards.”

“Wage is the biggest issue, and staffing,” said Dorette Morris, who has been a CNA at Saint Mary Home for 20 years. CNAs working overnight are responsible for 25-30 residents each, she said, and during the day two split the duties of caring for the same number of patients, but it’s not enough.

“Once they hear what they will make they don’t stay. They can make more elsewhere,” she said of the attempt to hire new workers. 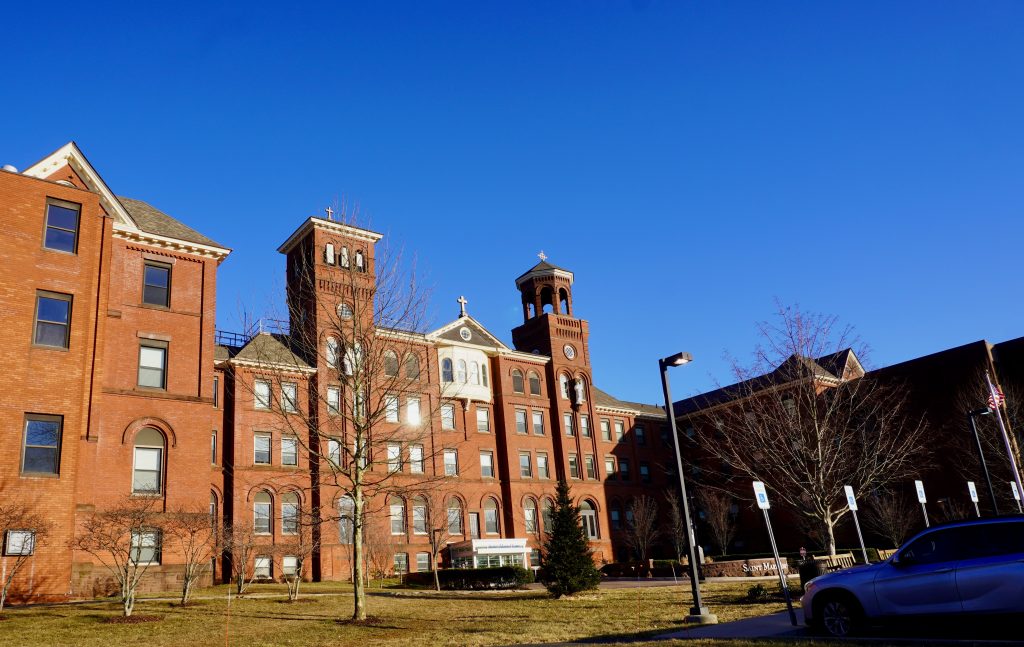 Mitzie Williams, a dietary aide at Saint Mary Home, said morale is low and the situation in the kitchen at Saint Mary Home is “very stressful and sad,” with workers feeling that management doesn’t care. She said when new employees are hired, they are thrown right into the jobs without allowing for a training period.

Duane Gordon worked as a dietary aid as well, and said he switched to housekeeping even though it meant a cut in pay and hours because it was less stressful. “It’s unfair because we are the ones taking care of our residents, and we are paid the lowest in Connecticut.”

Dawna Bernier, who represents SEIU 1199, said once the current contracts have been finalized with 65 nursing homes in the state, Saint Mary Home wages will be among the lowest if negotiations don’t progress.

With staffing shortages on top of that, they’re doing “double the work for less pay,” Bernier said.

The facility has accepted COVID-relief funds intended to be passed along to workers at the nursing homes, she said, but thus far the money has not been paid to Saint Mary Home workers.

While more than two-thirds of the care for Saint Mary Home residents is funded through Medicaid, Martin said, and negotiated increases in reimbursement should be able to be used for increased wages and benefits for the front line workers, Saint Mary Home in its most recent Medicaid cost report indicated the facility paid $2.2 million to its parent company, Mercy Community Health, in part for “direct costs associated with the parent company, including wages of the CEO, CFO, Administrative Assistant, and the VP of HR and other directly non-allocated expenses … such as insurance for the officers and financial consulting.”

“Saint Mary Home values our colleagues’ commitment to providing compassionate, healing care to those we serve.  We are currently operating under, and are bound by, a contract negotiated between SEIU District 1199 and Saint Mary Home. This contract is active and does not expire until March 15, 2023,” said Christine Looby, a spokesperson from The Mercy Community, which operates Saint Mary Home and The McAuley in West Hartford.

The rally was held in between shift changes, and no work stoppage was involved.