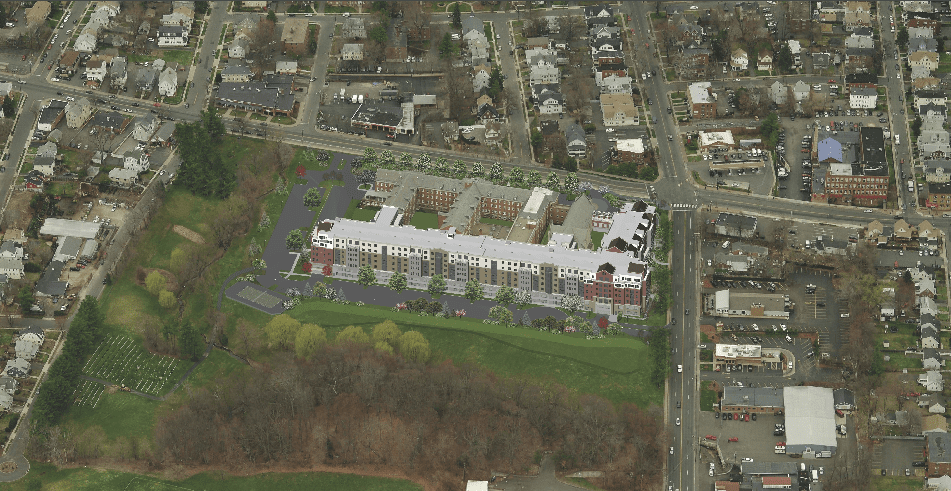 Detailed plans for the project were presented to the West Hartford Town Council at a public hearing Thursday night, but there won’t be a vote until January.

Extensive planning and outreach has already gone into the proposal for Arcadia Crossing, a 310-unit apartment complex planned for the 22-acre property currently owned by the Sisters of St. Joseph at the corner of Park Road and Prospect Avenue, and on Thursday night the public was invited to hear the details and provide public comment to the Town Council.

Susan Hays, the attorney representing developer Center Development Corporation (CDC), said that proposed development is the culmination of three years worth of work that began when the Sisters of St. Joseph decided to sell the property in 2012. “We think we have a plan that exemplifies the best in urban/suburban design for multi-family use. It shows great sensitivity to the neighborhood, real estate, and environmental resources,” she said.

The Sisters of St. Joseph chose CDC from among the offers they received, and are very much in favor of the proposal. “The culmination of this project is very, very important to the Sisters,” Hays said.

Chuck Coursey, who provided community outreach on behalf of the developer, said extensive discussions were held with neighboring businesses and residents in West Hartford as well as in Hartford since the property sits right on the town line.

The critical objectives – providing a new home for the Sisters, preserving the historic building, preserving open space, and benefitting neighborhood the neighborhood –  have all been met in the Arcadia Crossing proposal, Coursey said.

The target market is mobile young professionals ages 28-45, as well as local empty nesters looking to downsize and remain in West Hartford, Coursey said. Rents will be “market rate” and will range from $1,400 for a studio, to $1,900 for a one-bedroom, to $2,600 for a two-bedroom apartment.

Units will have granite countertops with islands in the one- and two-bedroom apartments, stainless steel appliances, and hardwood floors in the living rooms. Every unit will have a washer and dryer. Units in the renovated portion of the building as well as in newly-built sections will be similar, Architect Sean Donadio said.

Amenities such as a swimming pool, tennis courts, fitness center, and courtyards will be provided. The existing chapel, which will be deconsecrated, will be used as common area for all residents with workstations, living rooms, a concierge desk, and a kitchen to be used for events.

The “west wing” portion of the property – 36 bedroom units as well as a kitchen, other common areas, and a courtyard – will be condominiumized and ownership will remain with the Sisters of St. Joseph who will continue to live there as long as they like. The Sisters will also retain ownership of an existing cemetery on the property. Renovation is already underway on the west wing.

Some concerns raised during the outreach process, Coursey said, included the fact that the entire complex will be market rate rather than having a portion set aside as affordable housing, but Coursey said that according to John Scobie of CDC, that would not be feasible for this project. Elements of the project – rehabbing and reusing the existing building and placing a portion of parking underground to preserve open space – make it very expensive. “These constraints add significantly to the overall cost of the project,” which is approximately $300,000 per unit.

The intent to include an affordable housing component would have had to have been included at the beginning stages, before the outreach was done, and in time for the developer to seek special grants and other available funding in order to make the project affordable, Coursey said.

David Fink, a West Hartford resident who is also policy director for Partnership for Strong Communities in Hartford, was one of several who urged the Town Council to include affordable housing in the Arcadia Crossing project. “Not doing so would be a missed opportunity,” Fink said.

“Other towns are doing so because it’s the right thing and also because its good for the town to have diversity,” Fink said. People who qualify for affordable housing – those who earn between 60 and 80 percent of the median income – are good people, Fink said.

“I think would be ironic [if none of the units in Arcadia Crossing were made affordable] because the Sisters of St. Joseph have been able to administer to people in our community … and if they did not have homes they could afford they would not have been able to do this work,” Fink said.

“Currently our town’s percentage of affordable housing units is very low, about 7 percent,” resident Elizabeth Buczynski said. She said that if the town is interesting in having older folks stay and younger folks come back, then the town should require all new residential development to have an affordable component of at least 10 percent.

“It’s time to take the next step, open the door, and welcome the valuable contributors who earn less money,” resident Kate Robinson said.

Sister Susan Cunningham, who is president of the Sisters of St. Joseph of Chambery in United States, spoke out in favor of the project on behalf of the approximately 15-20 other sisters who were among the attendees at the public hearing.

The CDC proposal, she said met all of their goals, including allowing the Sisters to remain a presence in West Hartford and retain their space in the west wing area and the fenced-in cemetery. The Sisters appreciated that CDC would renovate rather than demolish, she said, and sought to purchase the property because of the green space, which they will enhance through landscaping.

“By building these apartments, CDC will be good neighbor and bring a much-needed boost to all businesses in the area,” Cunningham said.

Tracy Flater, speaking as president of the Park Road Association and as executive director of Playhouse on Park, offered full support of the Arcadia Crossing project. “The prospect of 500 new residents is incredibly exciting,” Flater said, and businesses just across the line in Hartford’s Parkville are also excited. She said she is grateful to the Sisters for choosing CDC. “We think they made a great choice, very commendable.”

The Town Council was originally scheduled to vote on the proposal, which involves creation of a Special Development District, but the public hearing has been continued until Jan. 12, 2016, at 6:15 p.m., due to the need for response to some questions raised by the Town Planning and Zoning Commission earlier in the week. The Town Council is now also scheduled to vote on the proposal at its meeting on Jan. 12.