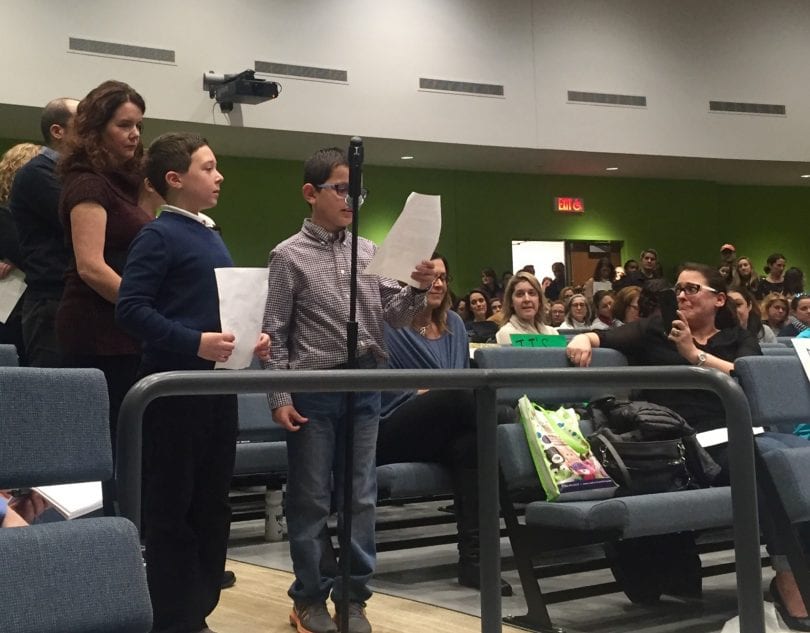 More than 50 spoke at the West Hartford Board of Education/Town Council budget forum including many students who spoke in favor of QUEST. Photo credit: Ronni Newton

Prior to the start of the public forum, West Hartford Board of Education Vice Chair Dr. Cheryl Greenberg announced several programs that board members have made a commitment to preserve.

More than 50 West Hartford residents spoke at a public forum Thursday night in the Charter Oak International Academy auditorium, asking their elected representatives on the Board of Education and Town Council to maintain certain services and programs and not increase class sizes.

The large venue, and the crowd of several hundred – many of whom were teachers and some of whom were students – was a testament to concern about the budgets proposed by both Superintendent of Schools Tom Moore and Town Manager Ron Van Winkle. The town manager’s budget incorporates the school budget, and if passed as proposed would increase taxes by a total of 10.3 percent – an approximately 7 percent for residential taxpayers and more than three times that increase for businesses.

Along with their proposed budgets, both Moore and Van Winkle listed reduction options – cost savings that were outlined, though not recommended, for the elected officials to consider. Residents had strong feelings about preserving many of them.

The Board of Education has already held several workshops, carefully analyzing a portion of the budget, and Vice Chair Dr. Cheryl Greenberg received a huge round of applause when she outlined for the audience the items board members have agreed thus far would not be eliminated.

“We have all agreed will not cut early intervention reading specialists. We will also keep the librarians. We have agreed to keep world languages in the elementary schools … we will not be raising elementary school class sizes, and finally, as a working mother I would like to proudly say that we will keep full time kindergarten,” Greenberg said. 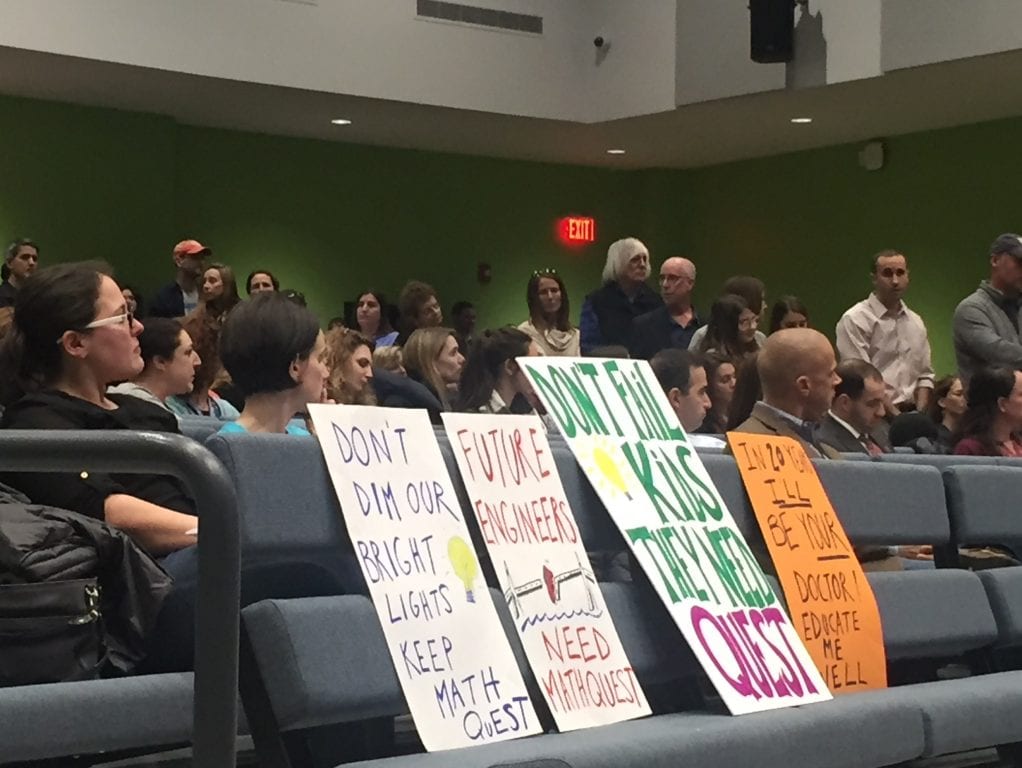 Board of Education Vice Chair Dr. Cheryl Greenberg announced Thursday that QUEST was off the table as a proposed cut, but many parents and students still spoke in support of it, and brought signs. Photo credit: Ronni Newton

“We’ve also all agreed that we do not want to cut any of the high school reading teachers, nor are we willing to cut elementary or middle school QUEST,” said Greenberg. She added that just because a program wasn’t mentioned doesn’t mean it’s on the chopping block. Some programs are still under discussion and others haven’t even been discussed yet.

The Town Council has not identified specific plans for any of the reduction options outlined by the town manager. Mayor Shari Cantor said that while the Town Council has overall budget responsibility, the school budget is a line item and they would not specifically address education-related programs.

A number of the speakers at the forum were students, many of whom still advocated for the maintenance of QUEST, even though the board already committed to saving it. The students said that QUEST helps them think creatively, and math QUEST – where students work approximately two grade levels ahead – helps them reach an advanced level of achievement that is very beneficial for future career aspirations.

“Reducing magnet staff is only going to reduce the integrity of our program,” said Rebecca O’Neil, speaking in support of maintaining the STEM program at Smith. Other speakers also noted the benefits of the STEM program.

Resident Erin Striff argued against closing the Bishops Corner library branch – as well as eliminating parking validation at the Noah Webster Library – both of which would impact seniors and parents with young children. “If Bishops Corner library were closed it would hurt the very populations that need it the most,” Striff said. “Our libraries are centers for community … a neighborhood library is less a destination and more a part of family life.”

Libraries are not outdated, Striff said. “When we ask a library staff member, and this goes for school librarians, too, we have a trained professional there to help us sort out fact from their alternatives.”

Chuck Coursey, vice-chair of the West Hartford Public Library Foundation, also spoke in favor of maintaining the three library branches, as well as maintaining the validated parking for the Noah Webster Library. “Taking away validated parking for those folk is almost assessing a fee on those patrons.” West Hartford Center and Blue Back is a great mixed neighborhood, if you take away validation you discourage people from coming to the public library and you take away some of that vitality and diversity, Coursey said.

Peter Towey, parent of a middle school student and two elementary school students in the district, said he supports the town manager’s and superintendent’s budget. “As everyone in this room we struggle with taxes but I understand the value that we get for those taxes. I support those proposed budgets because I feel they protect the programs that we as a community so value and have come to rely on,” he said. “I don’t feel there’s a lot of fat in the budget,” he said, and cuts – to the schools and to public services – would have a devastating effect.

Jessica Goldstein, representing Great by 8, also encouraged the Board of Education to adopt the superintendent’s budget without making any reductions.

Jared Leghorn, a resident (who plans to be a future West Hartford Public Schools parent), Bristow health physical education teacher, and Conard High School head boys basketball coach, was one of numerous speakers who spoke in support of keeping two unified arts classes per day in the middle schools. A reduction to one class per day could save in excess of $1 million according to the the superintendent’s analysis. Leghorn said that cutting time from unified arts “would significantly impact every student, every day, every year during their middle school career.”

Cutting unified arts would “eliminate opportunities to minimize disparities between groups of students,” since unified arts allow for students of all abilities to be in classes together with their grade, Leghorn said. “Unified arts are not an optional part of a student’s day but an essential part … reducing these vital classes to once a day is an injustice to our students and the future of our district.”

One of the programs that appears on the list of reductions for the Board of Education to consider is ASK (Alternative Search for Knowledge), an alternative English/social studies program that operates at Hall High School. It’s a “Tier 2” intervention for students who are underachieving and may be at risk of dropping out, that costs $52,000 and is co-taught by Jim Solomon and Jerry Cogan, who co-founded the program about 40 years ago.

Solomon and Cogan, who are both semi-retired, remain very dedicated to the types of students they’ve been serving and the need isn’t going away, Solomon said. The savings that would be achieved by eliminating a program “that has consistently helped an often voiceless core of students,” doesn’t include the additional cost estimate for other interventions that might be needed in the program’s place, Solomon said.

Many former ASK students have written to the board about the impact of the program on their future successes after high school, Solomon said. Resident Liz Kerrigan, who has three sons who attend school in West Hartford, said that her husband, sister, and many others she knows are successful products of the life-changing ASK program. “I’m very happy that we’re taking care of enrichment, but you have to consider at risk kids as well,” Kerrigan said. “I really hope you keep it and not be pennywise and dollar foolish.”

West Hartford Education Association President Ted Goerner, who is also the parent of a current student and a WHPS graduate, said the governor’s budget proposal is “dead on arrival” and urged the board and council not to “act out of a sense of panic or a sense of desperation.”

If cuts are to be made, Goerner said, “do it with a scalpel and not with a cleaver.” West Hartford won’t continue to attract the best and the town can’t afford to cut teacher’s salaries, he said.

Some speakers asked to protect class size. Conard English teacher Emily Genser, who is also a resident, said that larger class sizes might be possible for AP classes but not for the neediest, at risk kids. “We’ve thought about AP long enough, it’s time to think about these classes, and how to make those numbers smaller,” she said.

Related to class size is also the option of eliminating the team structure in seventh and eighth grade. “Do you like chaos? No teams in middle school is chaos. Larger class sizes is chaos. Chaos is not conducive to learning,” said resident Chris Vargas as the audience cheered. Vargas said that education is not just math, science, reading, and writing, and cutting art, music, and physical education would not develop the whole student. “This budget brings chaos and that is not good.”

One optional reduction is the Suzuki music program, which serves approximately 160 Pre-K through third grade students at Smith and Charter Oak at a cost of $65,000. Liz Fay, who teaches the program, as well as many students, spoke in favor of maintaining the program for its powerful impact and the opportunity to offer students violin lessons who would otherwise never have them.

While most of the speakers advocated for preserving programs or levels of service, resident Shawn Daly, the parent of an 11-year-old daughter, prefaced his words by saying they were going to be unpopular. “What I haven’t heard is anyone speaking for the taxpayer of this great town,” Daly said. He said we can’t raise taxes and need to “live within our means.” More than 80 percent of the budget is salary, pension, and medical benefits, and Daly told the legislators that residents need to “hold your feet to the fire and renegotiate things and make the tough decisions instead of scaring people with tactics about cutting programs that really are minute parts of the budget.”

The state’s proposed budget, presented by Gov. Dannel P. Malloy in February, is the major driver of the town’s proposed budget increase. Between the $8.01 million of teacher pension costs that the town would have to absorb, and cuts in Educational Cost Sharing and other grants, West Hartford’s negative impact is approximately $14.5 million. According to the budget presentation by West Hartford CFO Peter Privitera on March 8, without the change in state funding, the average increase for homeowners for FY2018 would have been only 1.3 percent. 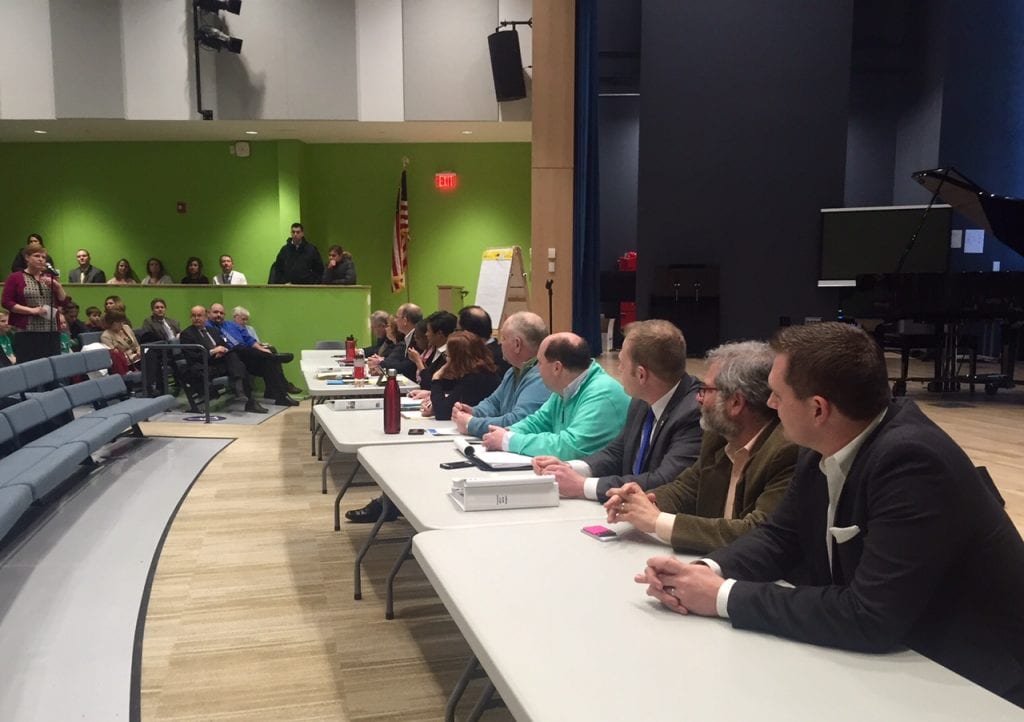