West Hartford climbed into the red alert zone last week, and the town’s case rate per 100,000 of population reported Thursday is now 23.6. 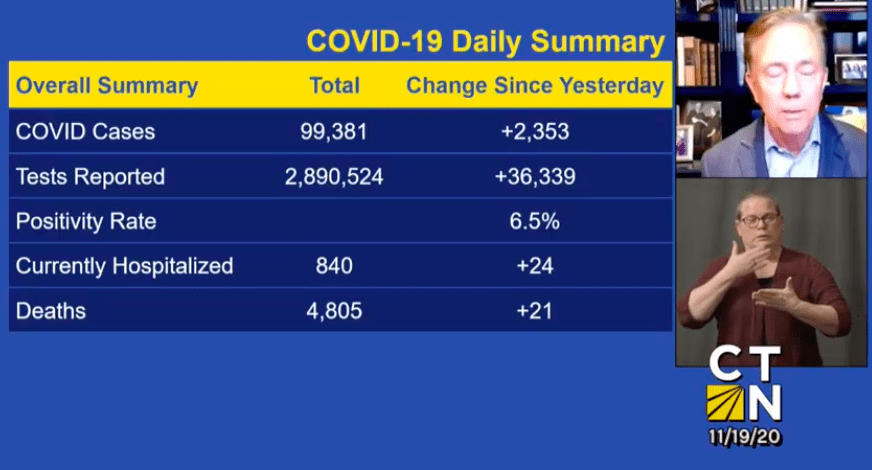 Nearly all of Connecticut was doused in red on the state’s coronavirus infection rate map shown during a Thursday news briefing in which a quarantined Gov. Ned Lamont announced surging virus statistics he called “disturbing.”

The virus seems to have completed the resurgence it began in a handful of towns in eastern Connecticut. Now, 145 of 169 towns and 96% of the population are in areas with “red alert” levels of infection. In the last day, the state reported a positivity rate of 6.5% of those tested, adding another 2,353 cases. Twenty-four new COVID patients were hospitalized, bringing the statewide total to 840. Meanwhile, 21 coronavirus patients have died since Wednesday.

West Hartford’s positivity rate for the same period was 4.7% according to Thursday’s report, up from 2.9% in last week’s report.

“I hate to dwell on this but a lot of people think, ‘Boy, this time around it’s safer, we’ve got the therapies, it’s a younger demographic.’ No. Twenty-one fatalities in the last day alone. Pay attention to that,” Lamont said from his home in Greenwich where he’s been quarantined since last week when a member of his senior staff tested positive. 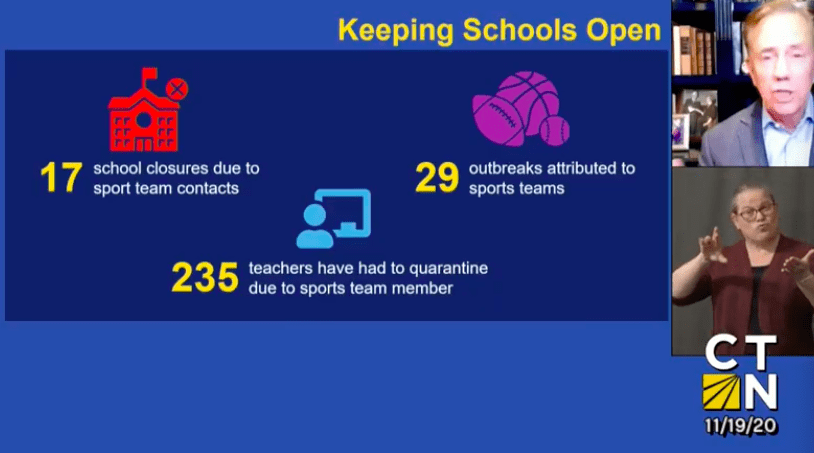 Citing cases linked to sports activities, the governor postponed all winter sports outside of professional and college leagues. The announcement mirrors one by the Connecticut Interscholastic Athletic Conference earlier this week delaying all high school sports until Jan. 19. The delay goes into effect Monday. Lamont recognized the news would be a disappointment for many families.

“We’ve just seen too many infections in and around those winter sports,” he said. “Not necessarily on the ice but everything up to the ice. The travel there, locker room, and such. There we have to err on the side of public health and this is the best way we can keep your schools open a little bit longer.” 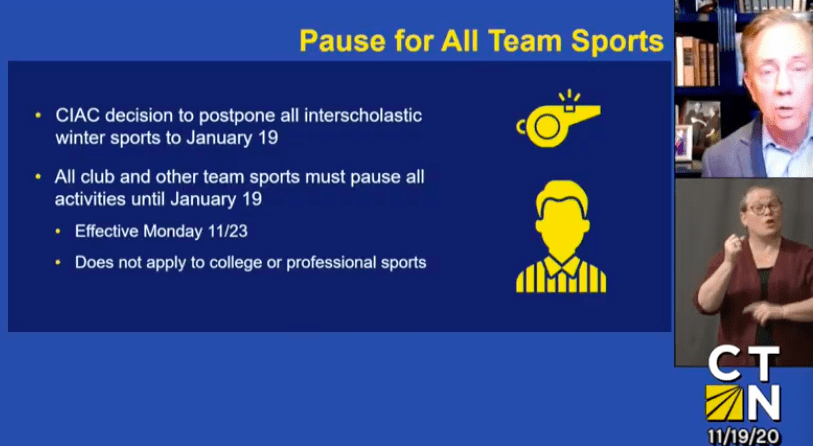 Lines for COVID testing and concerns about vaccines

With health care professionals conducting tens of thousands of COVID-19 tests a day, residents around the state have encountered long lines at some testing locations. Some have reported waiting for hours to receive a test.

Geballe said many locations were hiring more staff to expand their capacities. In the meantime, the state has assigned 50 National Guard members to supplement testing staff where there are shortages, he said.

Even where getting tested takes a long time, Geballe urged residents to be respectful of the staff.

“It’s cold out there now. They’ve been doing this for a long time. They’re getting tired. They’re taking abuse from some people who are waiting in line. So I’d encourage everyone to express their thanks to those who are out there every day trying to help protect us,” he said.

Asked about plans to distribute COVID-19 vaccines when they become available, Lamont said the state was working with hospitals and pharmacies to ensure that the doses, which must be kept at very low temperatures, are kept cold and administered correctly.

Geballe said the vaccine will be free to anyone who wants it, regardless of their health insurance status. 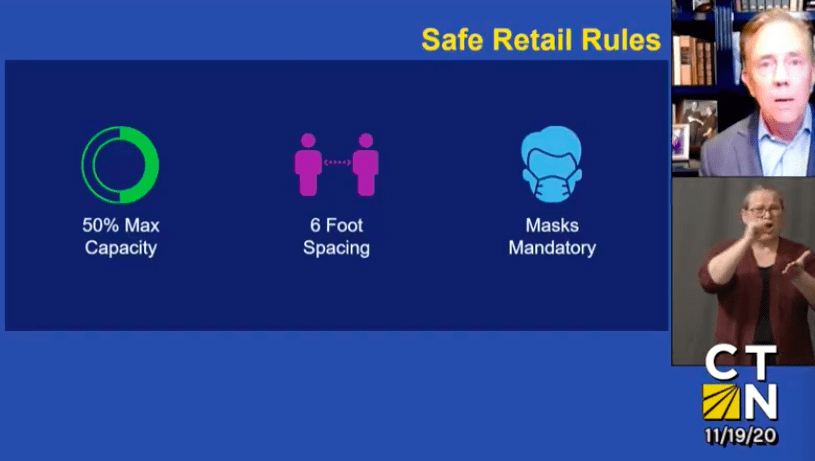 With the Thanksgiving holiday next week, Lamont urged residents and retailers to observe the state’s public health guidelines. As the stores kick off the busiest shopping season of the year, the governor asked them to police themselves and enforce the 50% capacity limits required by the state. If stores begin to get crowded, managers should require customers to wait outside until they clear out, he said.

“We’re doing everything we can to keep retail open, especially during these most important seasons and of course that starts with the masks,” he said.

The governor asked residents to keep their Thanksgiving Day celebrations to immediate family members and observe the 10-person gathering limit he enacted. He said the state’s ability to keep schools and stores open largely depend on whether people follow safety protocols.

“Ninety percent of that is related to self-enforcing. I can tell you ‘Have a small Thanksgiving.’ I can tell you ‘Keep to your closest family.’ It’s not that easy for me to enforce that so I really have to count on your good judgement,” he said. 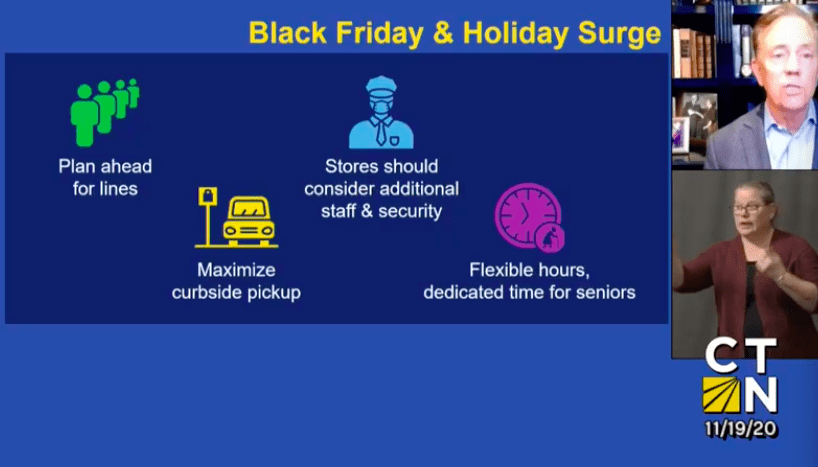