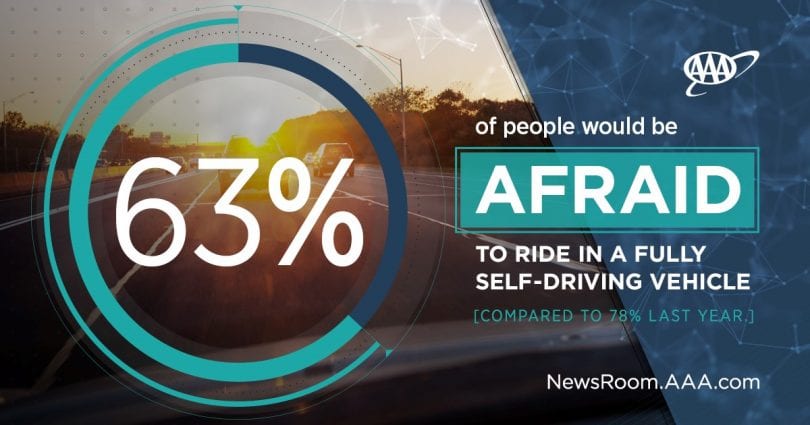 American drivers are beginning to embrace self-driving vehicles, according to a new study from AAA.

To ensure that American drivers continue to be informed, prepared and comfortable with this shift in mobility, AAA urges automakers to prioritize consumer education.

“The AAA survey is of particularly interest here in Connecticut where lawmakers recently approved pilot testing of autonomous vehicles on some roadways and are currently establishing an AV Task Force,” says Amy Parmenter, spokesperson for AAA in Greater Hartford. “It is important that consumer comfort and concerns be considered as we move forward”.

“Compared to just a year ago, AAA found that 20 million more U.S. drivers would trust a self-driving vehicle to take them for a ride,” AAA Automotive Engineering and Industry Relations Director Greg Brannon said.

In AAA’s survey, only 13 percent of U.S. drivers report that they would feel safer sharing the road with a self-driving vehicle while nearly half (46 percent) would actually feel less safe. Others say they are indifferent (37 percent) or unsure (4 percent).

Although fears of self-driving vehicles appear to be easing, U.S. drivers report high confidence in their own driving abilities, despite the fact that more than 90 percent of crashes involve human error.

To help educate consumers on the effectiveness of emerging vehicle technologies, AAA is committed to the ongoing, unbiased testing of automated vehicle technologies. Previous testing of automatic emergency braking, adaptive cruise control, self-parking technology and lane keeping systems has shown both great promise and great variation. Future AAA testing will look at how well systems work together to achieve higher levels of automation.