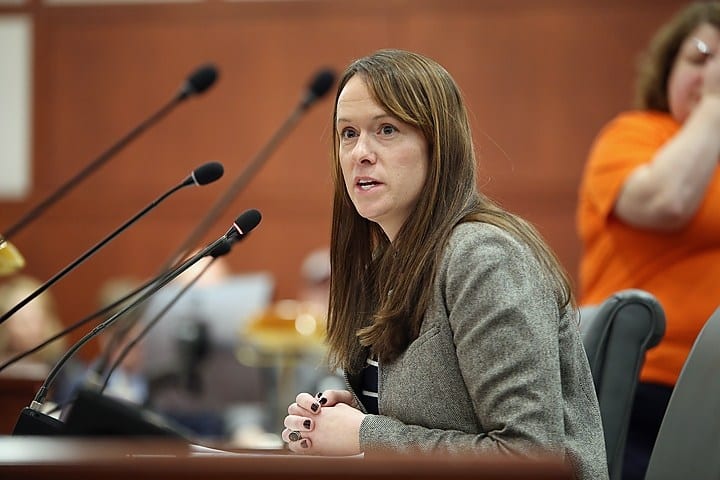 State Rep. Jillian Gilchrest of West Hartford worked for three years to get a bill passed to aid victims of trafficking.

Advocates working to end human trafficking are hailing the passage of two laws to help victims as a sign that lawmakers are aware of the problem and its far-reaching consequences. One law addresses criminal convictions of victims while they were under the control of traffickers; the other strives to make parents and coaches aware of potential child sexual abuse.

“It feels really good,” said Rep. Jillian Gilchrest, D-West Hartford, chair of the state’s Trafficking in Persons Council who worked for three years to get a bill passed to aid victims of trafficking. “There was a greater awareness by my colleagues of human trafficking.”

The bills were signed into law by Gov. Ned Lamont in June.

The difference is that police will be able to charge those who are using housing, drugs, or any other means of control, Gilchrest said. “Previously It had to be a monetary exchange to charge someone,” Gilchrest said.

Other portions of the law make it easier for victims of trafficking to get their convictions related to crimes they committed while being trafficked vacated. “The vacatur piece is very important because what we see is people who were trafficked and were arrested for things they did while under the control of their trafficker,” said Lucy Nolan, director of policy and public relations for the Connecticut Alliance to End Sexual Violence. “Often the victims are the ones going to prison while their trafficker remains free.”

Sexual violence can leave victims traumatized for years, impacting their relationships and ability to regain their lives, Nolan said. The burden of a criminal conviction only adds to the pain, she said. “It’s so difficult for people who have been sexually abused to find their way back,” Nolan said. “And it’s much more difficult if they are seen as criminals and have been abused.”

Under the new law, those who have been convicted of misdemeanors and Class C, D, and E felonies can seek to have their convictions erased through a court process that allows them to put forth evidence that the crime was committed while they were under the control of a trafficker.

The law also allows minors who are charged with human trafficking to use as a defense that their participation in the crime was a result of being victims of a trafficker themselves.

But more work needs to be done, said Sheila Hayre, a visiting associate professor with the Civil Justice Clinic at Quinnipiac Law School. Hayre is concerned that many women will not want to be retraumatized by having to tell their story again in court to get their convictions erased.

“We’re doing this at the end of the process,” Hayre said. “We should be addressing this at the front end. Not many women will want to relive that again. What we’re really going to see is the tip of the iceberg.”

It was Quinnipiac Law School students like Cindy Lill who helped move the bill forward after witnessing the experiences of women who had sought help from the clinic to vacate convictions related to trafficking, Hayre said.

The bill passed the House and the Senate in the week after Lill graduated. “There was no remedy for victims,” said Lill who was the executive chair of the Human Trafficking Prevention Project at the law school. “That’s when we started working on the bill. It’s amazing that it passed. I can’t wait for our clients to put this to use when it becomes effective in October.”

The final portion of the bill requires the Trafficking in Persons Council to study how abusers use “grooming” online to lure victims. “Grooming” has several facets, Nolan said, and it’s one of the tactics that ends in trafficking for sex work.

First an abuser will work to gain the trust of a youth and his parents or guardians, she said. They then will work to isolate the youth and start making overtures that led to sexual conduct. In the process, the victim is made to believe that they are responsible for the illicit behavior and that they or their family could get in trouble if they come forward.

A separate law passed this session, An Act Requiring the Provision of Information Concerning Child Sexual Abuse, requires all youth camps and sports programs to provide parents and children with information on appropriate behavior by coaches and counselors and how to recognize grooming.

The law also requires schools and camps to provide coaches with best practices on appropriately interacting with young athletes and to make the guidelines available on their websites.

“We have to bring this out into the open,” said Rep. Liz Linehan, D-Cheshire, who worked on the bill. “Until we start teaching people what grooming is, what is proper and what is not proper, it’s going to continue.”