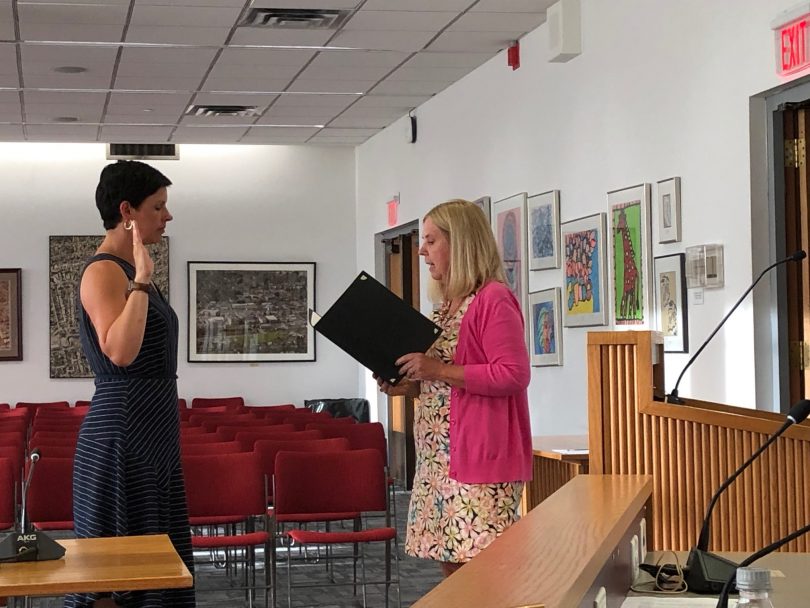 Amanda Aronson (left) is sworn in Tuesday night as a member of the West Hartford Board of Education by Town Clerk Essie Labrot. Courtesy photo

West Hartford resident Amanda Aronson was appointed to the Board of Education Tuesday night. 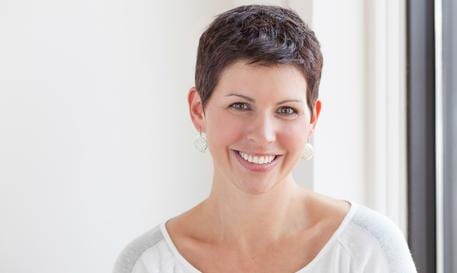 The West Hartford Board of Education, which ordinarily would be on summer hiatus, met Tuesday night for the purpose of filling a vacancy, and appointed Democrat Amanda Aronson as its newest member.

Aronson, 42, will fill the seat vacated by Democrat Cheryl Greenberg, who announced her resignation at the Board’s June 4 meeting. Greenberg, a professor at Trinity College, will be going on sabbatical.

“I’m honored to be appointed to the West Hartford Board of Education,” said Aronson. “It is a privilege to serve our community in this vital role, and I am ready to hit the ground running.”

She also recently served on the leadership team at the the Bridge Family Center – which operates West Hartford’s Teen Center and Family Resource Center – and has been a classroom teacher, primarily at the middle school level, and worked in a leadership capacity on administrative teams within schools.

Aronson is a graduate of Elon University (major in international relations and minors in Spanish and human services) and has a M.Ed from Lesley University, specializing in middle school education, and a Professional-Level Teaching Certification – the highest level offered in Massachusetts. She is married to Scott Aronson, and the couple has two children. Nathanial will be a freshman at Hall this fall, and Maia will be a seventh-grader at King Philip.

It is anticipated that when the West Hartford Democratic Town Committee (DTC) meets to nominate candidates on July 18, Aronson’s name will be placed on the ballot to run in the November municipal election, to finish out the remaining two years of Greenberg’s term.

Town Clerk Essie Labrot, who administered the oath of office to Aronson Tuesday night, said that according to charter, an appointment can be made to fill a vacancy on the Board of Education through the next municipal election, which in this case is Nov. 5, 2019. Provided she is endorsed by the DTC, which is anticipated, Aronson’s name will be on a separate line from the other candidates, with the term expiring in 2021.

Democrat Carol Blanks, whose term expires this year, will not be seeking re-election but is expected to be nominated as a Democratic candidate for Town Council. Democrat Dave Pauluk’s term also expires, and he is not seeking re-election.

Republican Mark Zydanowicz’s term also expires this year, and he told We-Ha.com Wednesday that he will be seeking re-election.

The DTC’s executive committee has recommended a slate of candidates, which includes Aronson and newcomers Sean Passan and Ari Steinberg for the Board of Education. They are expected to be endorsed at the DTC convention on July 18.

The Republican Town Committee will hold a convention on July 22 to endorse candidates. Information about additional Republican candidates was not immediately available.

According to Labrot, parties are required to hold nominating conventions during the period July 16-23 for the purpose of endorsing candidates, and a certified list of candidates must be sent to her by 4 p.m. on July 24.