The West Hartford Board of Education met at Town Hall on Tuesday before adjourning for the summer, receiving several reports and bidding goodbye to some key figures.

By Zoe Pierce and Dexter McCann

Tuesday night’s Board of Education Meeting, the last of the 2018-19 academic year, featured the annual Safe School Climate and Discipline Report as well as a presentation on building cultural competence in West Hartford’s Public Schools. The meeting concluded with farewells, as Board of Education member Cheryl Greenberg announced her resignation, and Director of Finance Chip Ward, who will be retiring, delivered his final report.

Board members also bid goodbye to student representatives Gus Bacon from Conard and Megan Striff-Cave from Hall, who will be graduating next week.

The report began with a reading of suspension and expulsion statistics for the 2018-19 academic year. Throughout the West Hartford Public Schools, there were 188 suspensions for serious infractions, of which 63 percent resulted in an in-school suspension. There were three expulsions, down from 11 in the 2016-17 school year.

Morrow noted his concern with the disparity between the incident rates of majority students and students of color, but was encouraged by the trend he saw in 2018-19.

“While we are significantly better than state and national averages, our suspension rates for both black and Hispanic students are still considerably higher than they are for white students. This is a problem that we are working on and it’s a problem we’re committed to resolving, but I also share that we’re encouraged by the trend over the last year.”

In 2018-19, statistics showed a 21.4 percent drop in the incident rate for black students and an 18.8 percent drop for -ispanic students.

Morrow followed up those statistics by reporting on what is already being done to eliminate the disparity in the incident rate between races.

“We’re working to resolve this through our continued work on racial justice training, our continued work with CSI (Curriculum and Staff Improvement) and student led workshops with EDC (Equity and Diversity Council), with the ongoing cultural competency, with the training we’re continuing to do at the middle and high school level,” Morrow told the Board.

Hines provided some insight into how progress has been made in addressing the disparity at Conard.

“We let all of our children know that we are invested in them. Whether it’s a black child, brown child, white child, it doesn’t matter. … Yes, some of this love might be tough. But the underlying word is ‘love,’ period. We don’t hesitate to tell kids that.

“To be honest, our minority students have big time trust issues as far as teachers and people of authority, and so it’s up to us to break those things down, and I think you’re seeing the numbers decrease because our sensitivity, awareness, communication, and relationship-building are increasing, and it’s effectively helping all students,” Hines added.

Superintendent Tom Moore was effusive in his praise of the school administrators, recalling prior years where expulsion numbers had been in the 40s and 50s.

“I was at Conard in the 90s, where there were dozens plus of expulsions … Conard is way safer than it was then,” Moore noted.

Solomon, who alongside Moore has overseen a drastic reduction across the board in suspensions and expulsions in her position at Hall, told the Board that today’s kids “want to behave, they want to be there.” She also emphasized the importance of fostering a schoolwide community in the prevention of disciplinary incidents throughout West Hartford’s schools.

“When kids feel connected, they’re going to abide by the rules more easily and want to be a part of the environment instead of exclude themselves from it,” said Solomon.

Following the Board’s approval to allocate $2 million over a two year period toward improving school security throughout the district, the Safe School Climate and Discipline Report looked at some of the changes that have been made.

The district has seen success with programs and resources such as “Stop the Bleeding” tourniquet training, an anonymous alert app through which 62 incidents have been reported and safely addressed since implementation this school year, emergency radios with direct access to emergency services, and active shooter training by the West Hartford Police Department.

This will include updated locks on classroom that can be triggered from the inside for teachers, lockdown shades on windows where students could be visible from the exterior, and overall more secure classrooms. Some of these changes have already been made in elementary schools with secondary schools soon to follow.

Dency referred to the recent criminal charges brought against the former deputy who was stationed outside Stoneman Douglas High School at the time of the 2018 shooting and, according to police, failed to protect the students saying: “I can confidently say that would never happen in this district.”

Another major concern the district is facing, a concern which is not unique to West Hartford, is students using electronic cigarettes (E-Cigs) and vapes, or specifically Juuls, on school property and at home.

Regarding Drug, Tobacco, and Alcohol offenses, 46 out of 54 incidents throughout the district were E-Cig-related, a number which has climbed over the past couple years and the Board referred to as an “epidemic.”

“You see an increase because we’re much more vigilant,” Solomon said, addressing the uptick in reports of E-Cigs and vapes.

The Board also touched on the range of consequences that students face when they are in possession of an E-Cig or vape product, stating that the school can test for the substance in the vape to determine if it’s a nicotine and marijuana product.

The consequences vary between the two, a marijuana offense being more serious, but the students are typically required to attend a session on the dangers of smoking and healthy alternatives, administrators told the Board.

In response to a question from Greenberg, Dency confirmed that the high schools are also equipped with Narcan in the case of a drug overdose emergency.

Board member Lorna Thomas-Farquharson noted the difference in statistics between the middle schools, specifically the high incidence of fighting/altercation and other infractions at Sedgwick as compared to the other middle schools, and asked if the other schools are sharing their approaches. Morrow said that the discrepancy at Sedgwick is actually due to a very difficult second semester for the students, following a tragedy involving seventh-grade twins in December 2018, and additional counselors have remained on duty., “This has been an intensely difficult year for all of Sedgwick,” Morrow said, and Principal Andy Clapsaddle has “done an incredibly good job keeping things together.”

The complete Safe School Climate and Discipline Report can be found here.

Moore also thanked Chip Ward for his service to the community as he prepares to retire after 22 years from his position as school director of finance and planning at the end of the 2018-19 school year.

“Chip knows the secrets of Connecticut,” said Moore, referencing Ward’s work on the Connecticut income tax. Ward also oversaw the construction of two West Hartford schools as well as the renovation of several others.

Greenberg, who served on the board for four years and will resign on September 2 to take her sabbatical from Trinity College where she works, was presented with an engraved wooden chair on behalf of the Board of Education for her service. 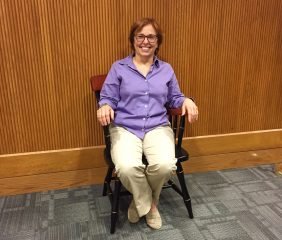 Cheryl Greenberg announced June 4 that she will be retiring from the West Hartford Board of Education. As is the custom for retiring Board members, she was given a commemorative chair. Photo credit: Ronni Newton

“I ran because I valued everything that the public schools gave to my children,” said Greenberg. “I have always believed that every single member [of this Board] is deeply committed to every student and school they served.

“I am grateful to live in a community like West Hartford,” said Greenberg, signing off.

The Board also voted on a policy update, unanimously confirming that not only is promotion and advertising not allowed in schools, but it is not allowed anywhere on school property. There has been some discussion about allowing advertising on the athletic fields, but it will remain prohibited in West Hartford. Programs for events will still be permitted to include advertising, since those are directed toward parents, not students who see them every day.

Some of the inequities noted in the Safe School Climate Report can be related to cultural competency, a topic discussed later in the meeting during a presentation by Roszena Haskins, the district’s director of continuing education and diversity enhancement.