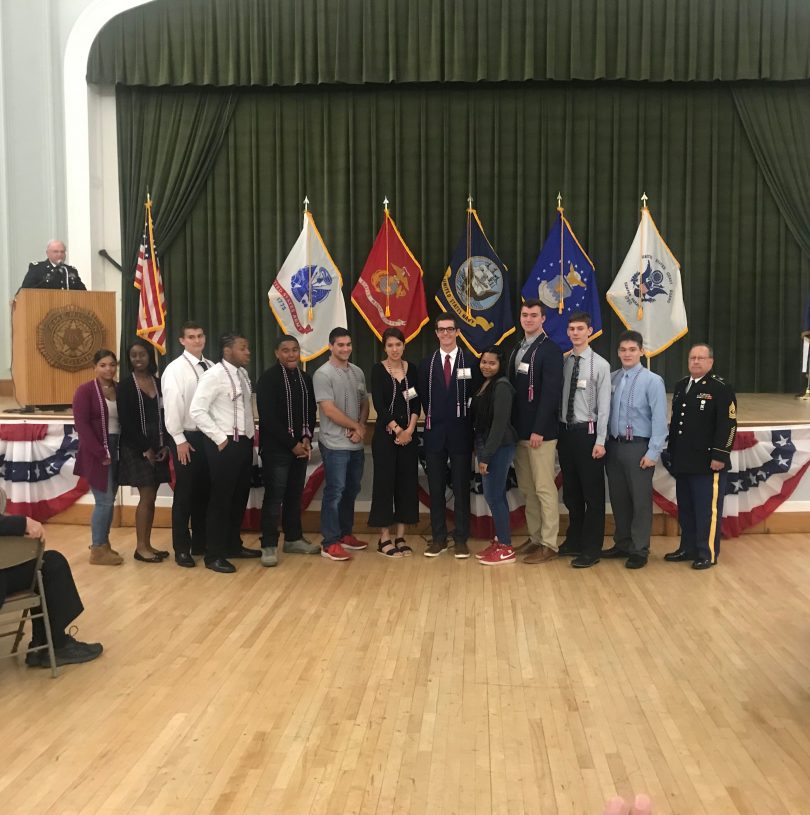 Eighteen West Hartford Students were honored at a recognition dinner held by the American Legion and West Hartford Public Schools. 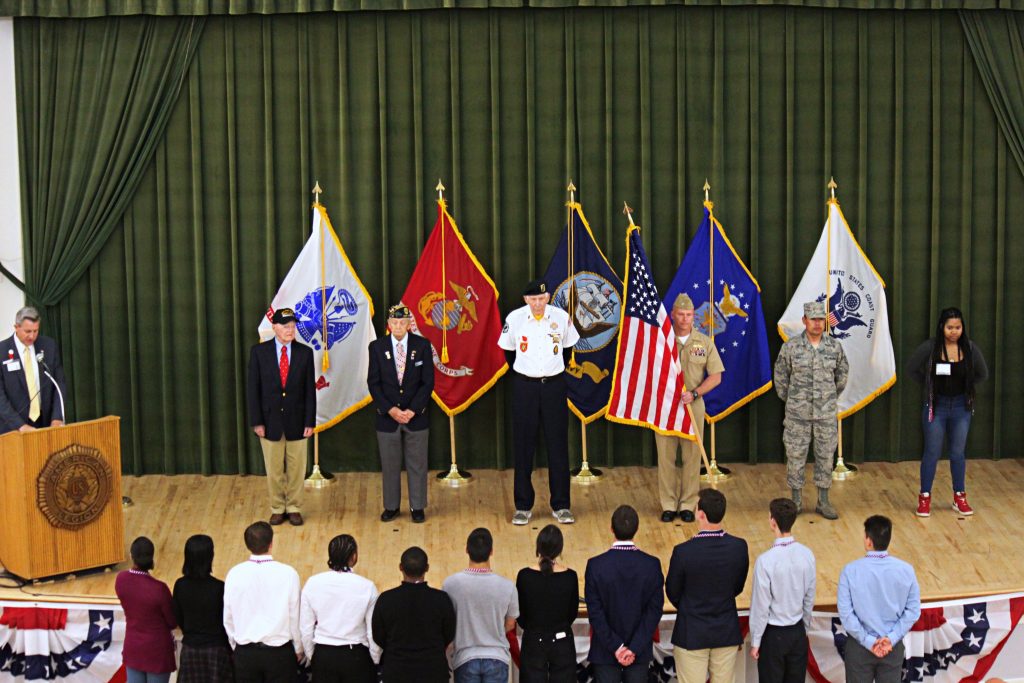 By Dexter McCann. Photos by Zoe Pierce and Ronni Newton

The ceremony was sponsored by American Legion Hayes-Velhage Post 96 in conjunction with the West Hartford Public Schools, and featured speakers of all military and academic backgrounds. Before they spoke, the Hall High School Choraliers sang a beautiful rendition of the National Anthem.

Following the anthem, emcee Dr. Rolf Knoll told the audience that the recognition ceremony “is a program that without a doubt we continue to see providing deserving recognition of the young men and women who have chosen to serve their country.” He also praised the ceremony as a way for the American Legion to honor their mission statement, which “is to support … youth mentorship, advocacy of patriotism and honor … and continued devotion to our fellow service members and veterans.” 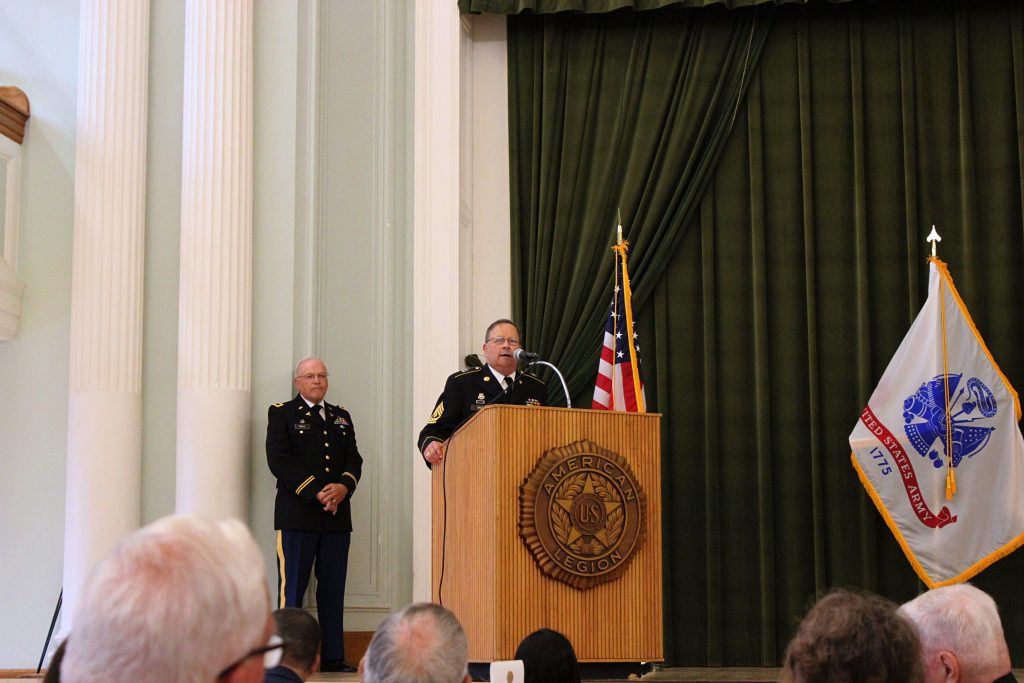 Jeff Cole, post commander of the American Legion Hayes-Velhage Post 96, delivered the opening remarks. His speech celebrated the future of the 18 soon-to-be military men and women, as well as that of the armed forces and the country.

“The reason for this event is because you students, the graduates this year, through military service are the future of our armed forces and the future leaders of country,” said Cole.

Tom Moore, superintendent of schools in West Hartford, also offered his thoughts. Moore spoke fondly of the event, and of the soon-to-be graduates in attendance.

“This is one of the things I’m most proud to be a part of. It’s the right thing to do to bring recognition for those who are choosing to serve and choosing service.”

Moore offered his profound thanks to all those in attendance, especially the service members-to-be.

Thomas Saadi, commissioner of Connecticut’s Department of Veteran Affairs, was the night’s keynote speaker. His speech was a reminder of the rich history of the military, as well as its importance in protecting the freedoms Americans take for granted.

“It’s a privilege for me to participate in this salute to our military inductees, as it is only because of those who have serve, those who continue to serve, and those who will service, that all of us, and all Americans, can live in this free and democratic nation,” remarked Saadi.

Saadi took a moment to honor all World War II veterans in attendance, but then returned to the subject of the honorees.

“I can tell you students here, from my own personal experience, that the United States military is among the most dynamic and diverse organizations in the world, with men and women from every walk of life. … And while diverse, they all have something in common. They are brothers and sisters in arms, volunteer to serve their country so that the entire nation may live in freedom.

“You are all here today because you understand the meaning of service to country, service to community,” Saadi added.

The obligation to serve linked all 18 of the nights honorees.

John Taylor, a Hall High School student who will attend the U.S. Coast Guard Academy next year, was captivated by the idea of service.

“I also really want to be part of something bigger. I’m really excited to see what I’m able to do, how I’m able to help people.”

When asked about his preference for the Coast Guard specifically, Taylor responded “it’s going to make me the best version of myself.”

Cristina Gaudio, a Conard High School student who will participate in the Air Force ROTC program at the University of Chicago, repeated the mantra of service to community, and added that she was drawn to the Air Force due to its frequent use of math. As for goals for the future, she added that she was focused solely on completing her ROTC program, and would proceed from there.

Maxwell Boyd, a Hall High student who will study in the Navy ROTC program at Virginia Tech, offered a personal explanation as to why he will be joining the service.

“I grew up next to a naval aviator, my godfather. The pride that he carried himself with, and the idea of a live of serving other people – what’s not to like about that?”

Boyd added that he “really believed in what this country stands for. Leaders aside, politics aside, what it stands for is really great.”

Following a generational passing of the colors, in which veterans spanning several generations passed down an American flag to the night’s honorees, Board of Education member Dave Pauluk offered concluding remarks, recalling humorous times from his own military experience.

The following students were honored at the event: 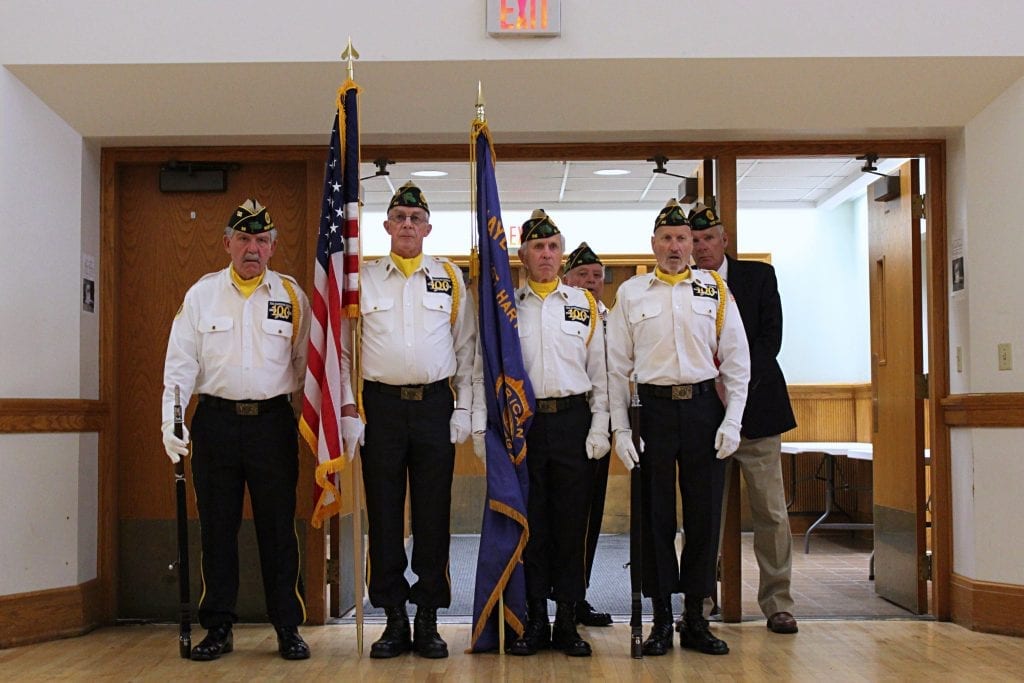 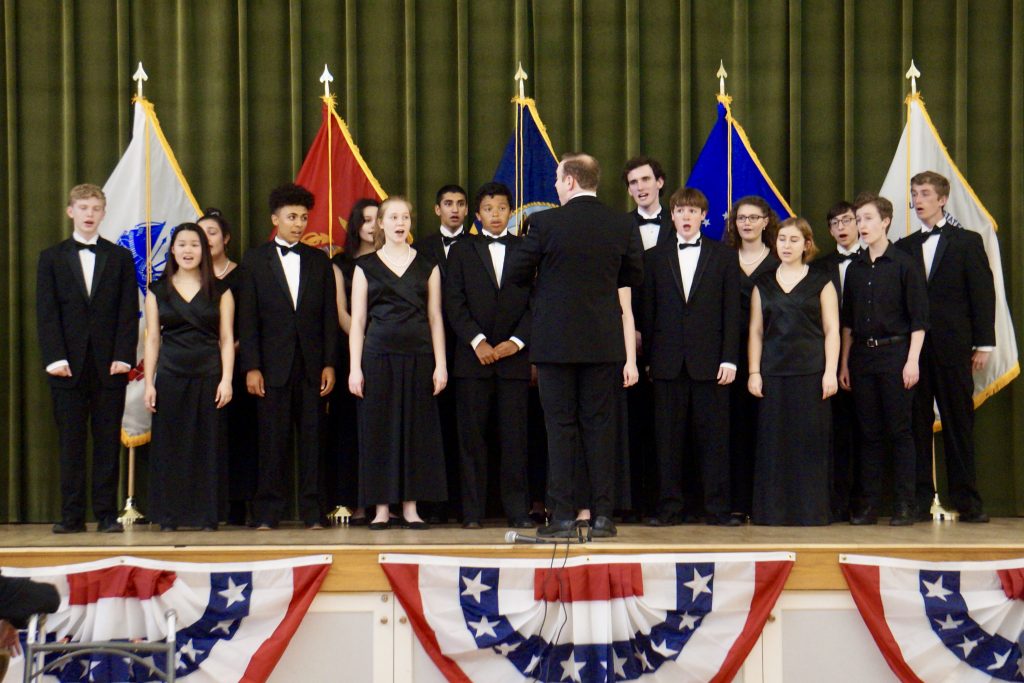 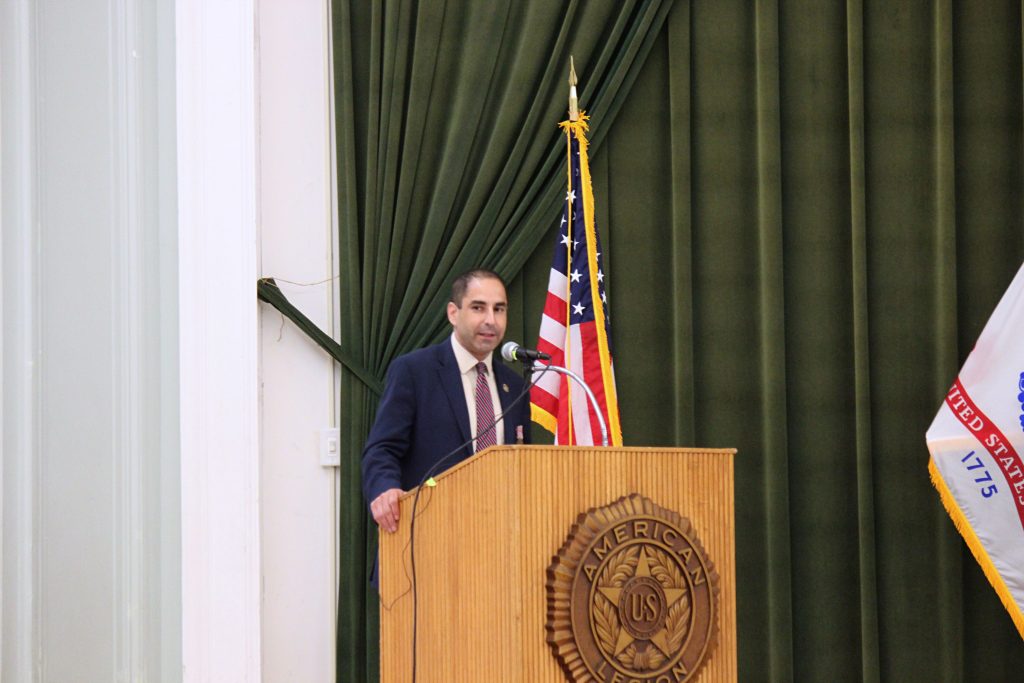 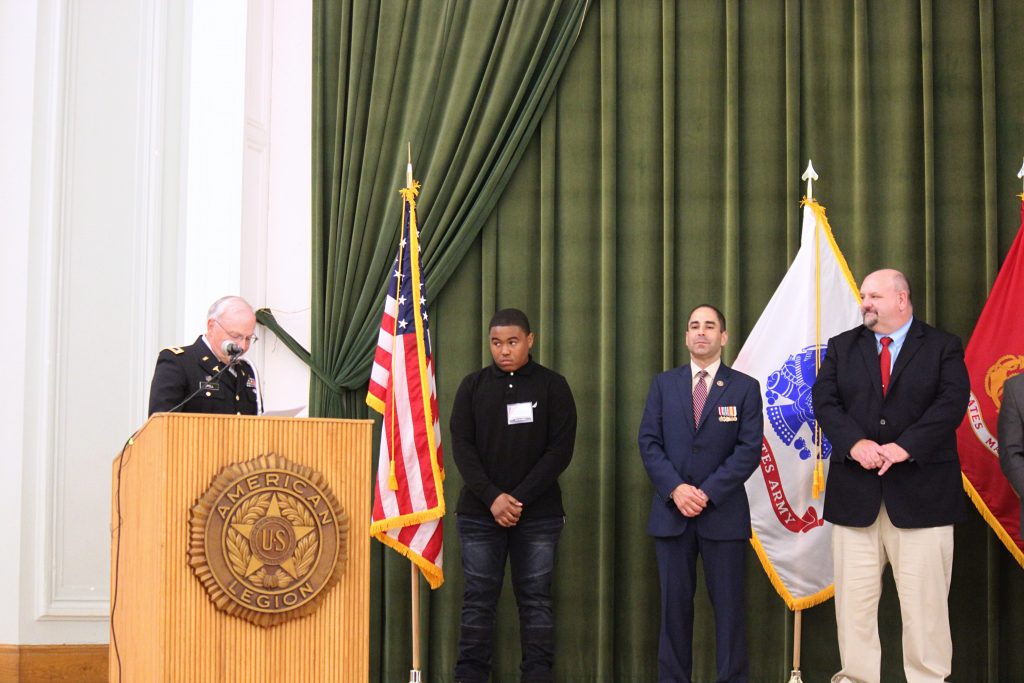 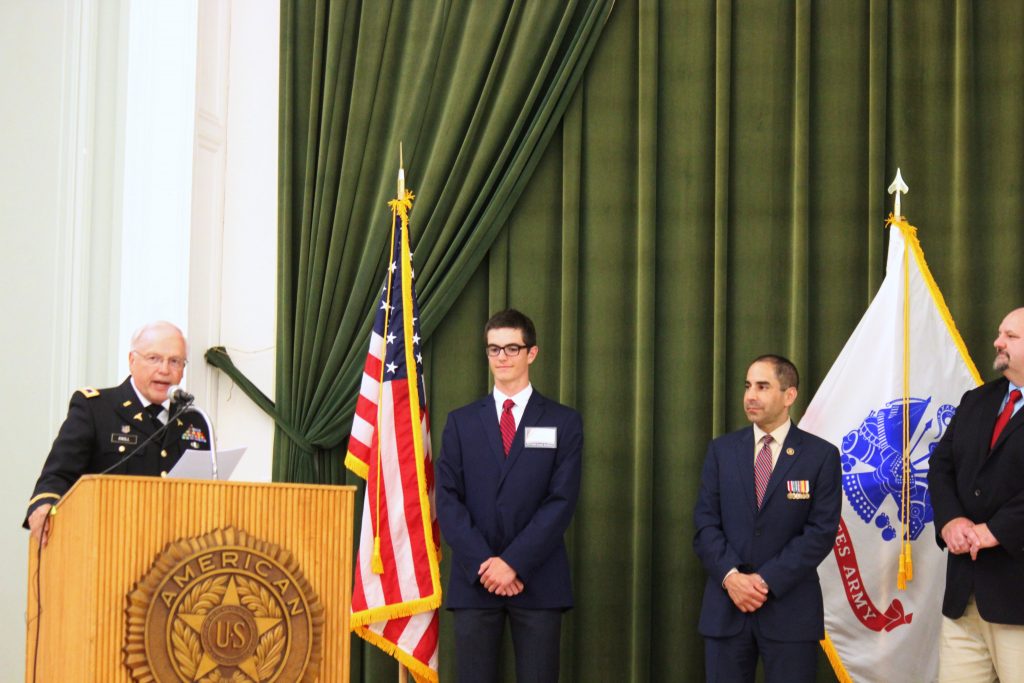 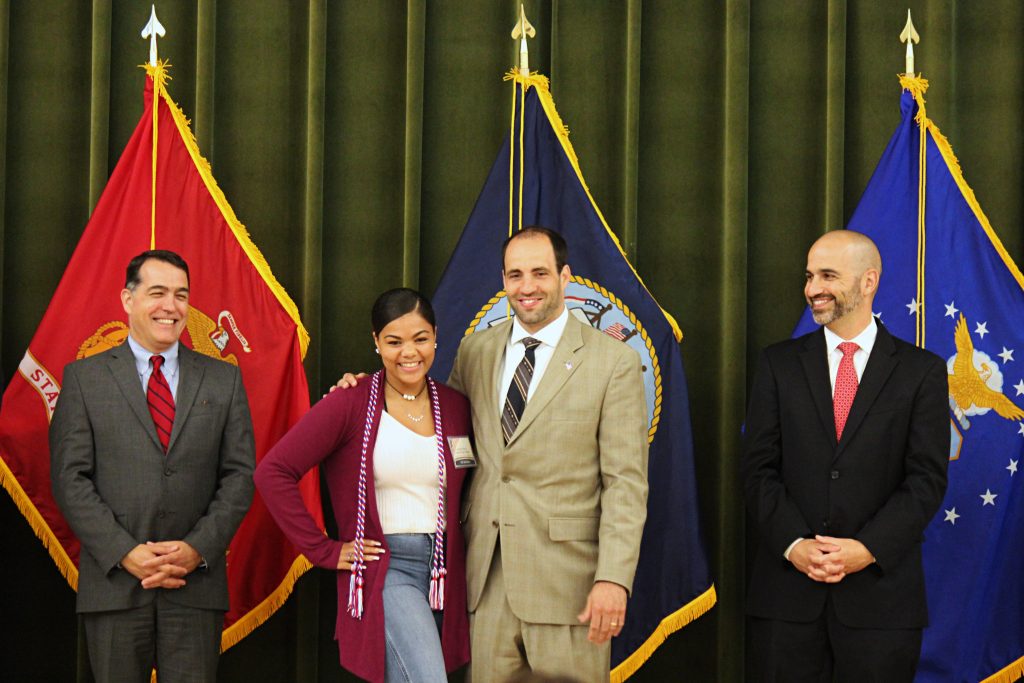