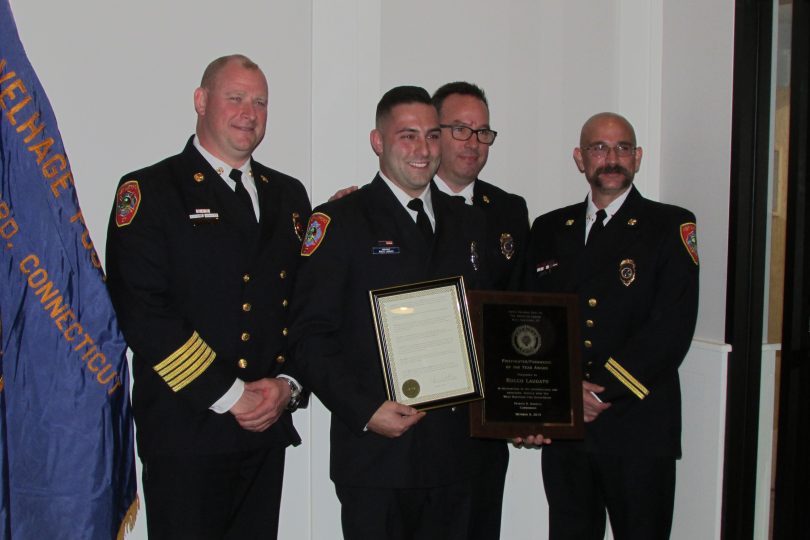 West Hartford Fire Department’s Rocco Laudato was named the Post 96 Firefighter of the Year for 2019. 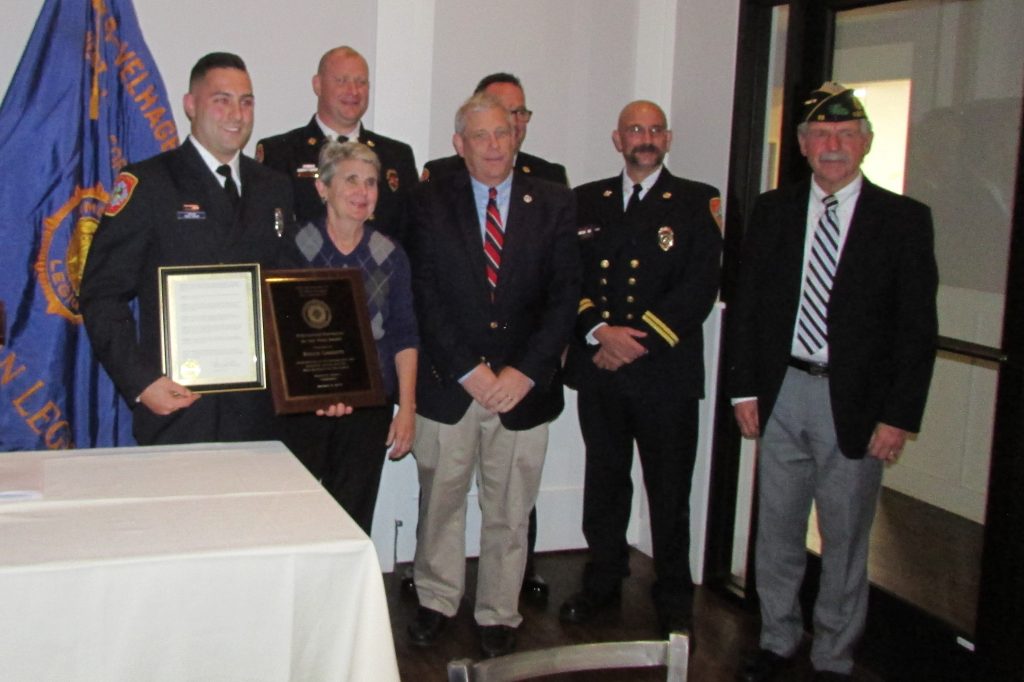 Firefighter/paramedic Rocco Laudato has been named the American Legion Hayes-Velhage Post 96 Firefighter of the Year for 2019, and on Nov. 7 was recognized at a celebration attended by family, friends, colleagues in the West Hartford Fire Department, and Post 96 members.

The group was welcomed by Post Commander Pat Harrell, who thanked the West Hartford Fire Department for the job they do every day to keep the town safe. He noted that firefighters are in harm’s way each time they respond to a call.

“It is especially gratifying for Post 96 to have the opportunity to recognize a member of our community’s first responders who has gone above and beyond the call of duty to demonstrate their dedication and commitment to their profession,” said Past Post Commander Moe Fradette, who served as emcee for the ceremony.

Battalion Chief William Kall provided Post 96 with many reasons why Laudato, who was also recognized earlier this year as the Exchange Club’s Firefighter of the Year, should be selected, and it was clear “his actions certainly deserve special recognition,” Fradette said.

Chief Greg Priest, who was named chief in November 2018 and was attending Post 96’s ceremony for the first time, expressed his appreciation for the Legion’s support and advocacy for West Hartford’s police and fire departments.

The process of selecting who from among the 90 members of the fire department should be recognized with awards is very challenging, Priest said. “Most fire personnel come to work ‘just to do their job’ and even under extraordinary circumstances do not believe that they ever go above and beyond. Further, when they do go above and beyond they don’t like to tell anyone about it.”

Identifying “acts of valor, life-saving, or above and beyond” contributions isn’t always easy amid a sea of excellent work, Priest noted, and the bar is very high for “award-worthy” behavior.

Firefighter/paramedic Laudato, who joined the West Hartford Fire Department in 2015 after working as a paramedic for AMR in Bridgeport, stood out this year, Priest said. “Adjectives and phrases used to describe Rocco by his officers were highly flattering and included wording such as ‘mature beyond his years, composed, and fantastic on both fire and medical calls,'” treating all incidents with calm, care, and passion no matter how stressful or serious the situation might be, Priest said.

In one particular example, which for privacy reasons Priest did not detail further, “there was a notable critical incident where all of Rocco’s knowledge, experiences, and medical skills were brought to bear on a gravely-injured patient. Working under incredibly stressful and medically challenging circumstances, Rocco was able to join a team of police officers already providing care, and then ultimately lead all of the medical efforts pre-hospital. As part of these efforts, Rocco performed a rare, if not incredibly unique and necessary intervention,” said Priest.

Addressing Laudato, Priest told him that his work stood out, and “wanted or not, you deserve this recognition,” and will now be regarded in the department’s history as “one of its finest.”

Laudato briefly addressed the crowd, and said it has always been his passion to be a firefighter and paramedic, and this job is the best of both worlds. He thanked his wife, Alyssa (whom he married in October), and other family and friends for making his career with the West Hartford Fire Department possible.

“On any given day, we may see people at their worst, and it is our job to adapt and overcome any challenges to the best of our ability and produce the best possible outcome,” Laudato said. During the incident referenced by Priest, he could not have accomplished what he did “without the assistance of all police, fire, and EMS on scene.”

On behalf of the Town Council, Laudato was also presented with a proclamation by then-Deputy Mayor Beth Kerrigan and then-Public Safety Committee Chair Leon Davidoff. 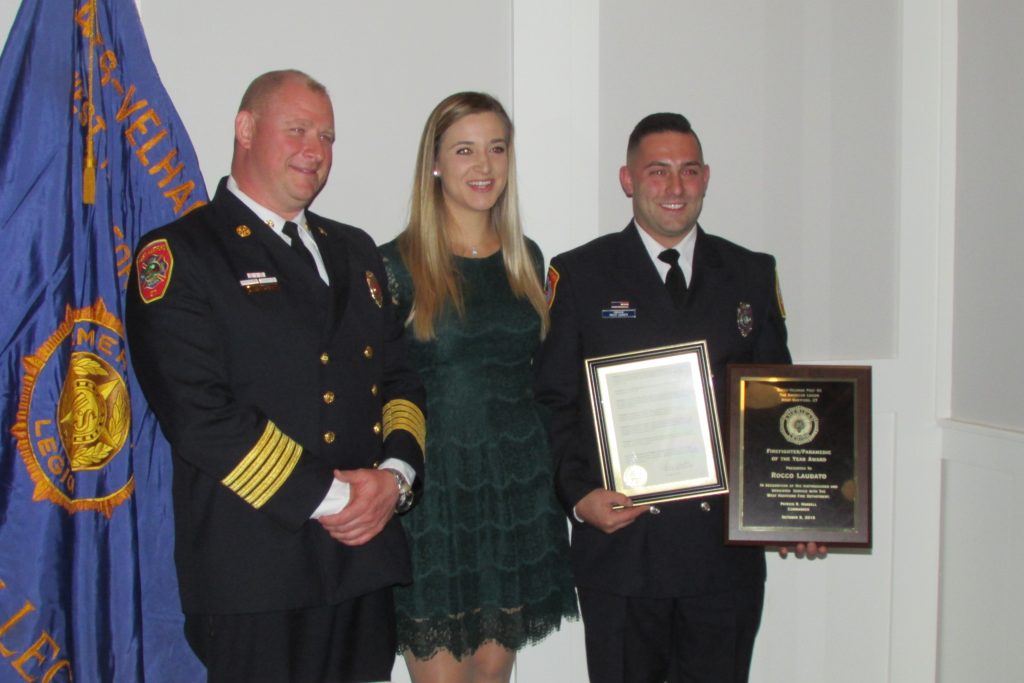 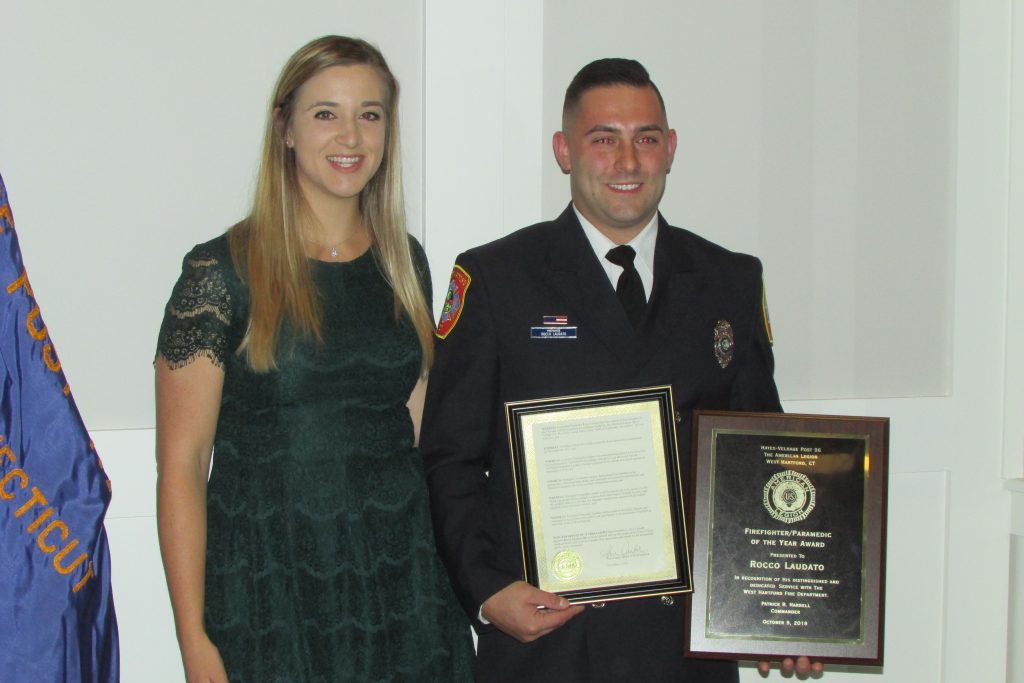 Firefighter/Paramedic of the Year Rocco Laudato with his wife, Alyssa. Courtesy photo 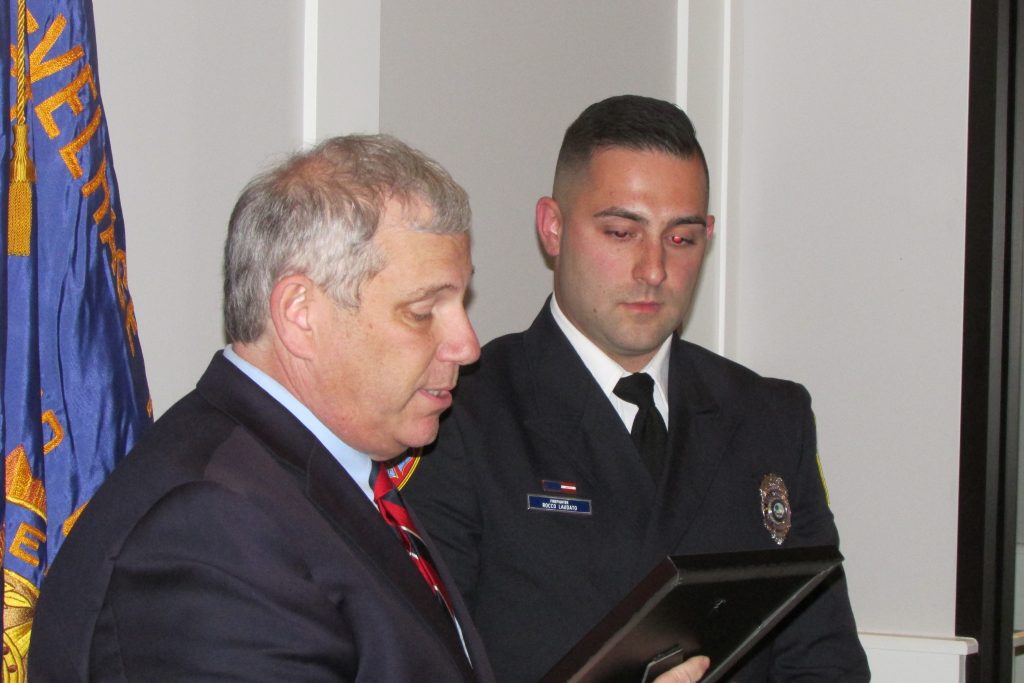 Leon Davidoff, as head of the Town Council’s Public Safety Committee, presents Firefighter of the Year Rocco Laudato with a plaque. Courtesy photo