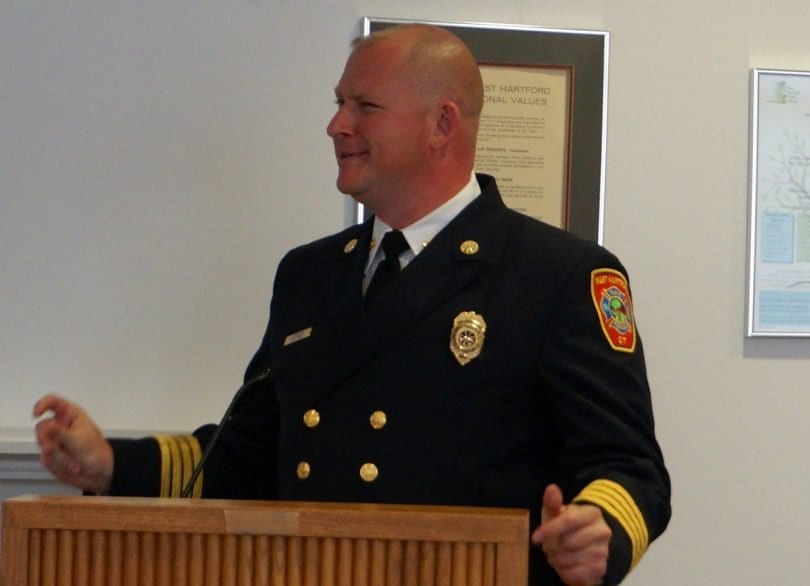 Greg Priest, who was hired as an assistant chief of the West Hartford Fire Department in July, will officially take over as chief on Nov. 10.

Town Manager Matt Hart announced Friday afternoon that Gregory H. Priest has been appointed as chief of the West Hartford Fire Department, and will assume his new role on Nov. 10, 2018.

Priest, 41, a resident of Salem, CT, was hired as assistant chief of the West Hartford Fire Department, responsible for operations, effective July 31, 2018.

“I’m deeply honored and humbled,” Priest told We-Ha.com in a phone interview Friday afternoon. “There were some very qualified candidates that came through.”

Priest is taking over for Chief Gary Allyn, who recently made an official announcement of his retirement after more than 30 years with the West Hartford Fire Department. Allyn’s last day on the job is Nov. 9, and Priest will take over the next day.

Priest said that the chief’s job was not on his radar. He said he was just doing his job, he said, but the town manager must have been watching closely and liked what he saw. “I came in wanting to do the assistant chief’s job, to do a good job. … I always felt that the organization selects the right individual at the right time and place,” he said.

“He’s really impressed me in his short tenure here and I asked him to consider it,” Town Manager Matt Hart said Friday afternoon. “He thought it through and has agreed to take on this new role,” said Hart.

“This isn’t about me,” Priest said. “It’s about recognition for the fire department. There are some great men and women providing fire service daily.”

Priest said that it will be his honor to lead them, and to provide vision and strategy for the department to be as successful as possible.

Hart said Priest immediately impressed him with his knowledge and experience as well as his character and integrity.

Important tasks that Priest will need to address right away include a study that is currently underway of the department, as well as the billing of ALS services, said Hart.

Priest’s career dates back to 1992, when he joined the Avon Fire Department as a cadet, and he also has experience in emergency service and law enforcement. He has an associates degree in paramedic services from Capital Community College, a bachelors degree in fire service administration, paramedic studies, and criminal justice from Charter Oak State College, and a management certificate for public service professionals from UConn.