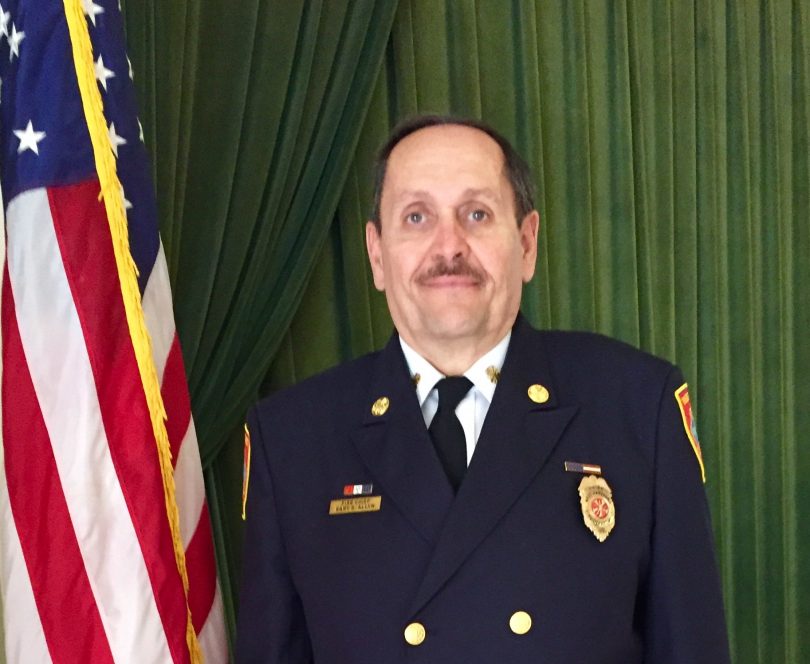 Gary Allyn will officially retire as chief of the West Hartford Fire Department on Nov. 9, 2018.

West Hartford Fire Chief Gary Allyn said that his first task, after retiring on Nov. 9, 2018, will be to clean up all the leaves that have fallen on his lawn, and then a few days later he will head to Florida for an extended Thanksgiving holiday with family.

Allyn was honored Tuesday at a luncheon at Town Hall, attended by family, friends, town officials, and firefighters from West Hartford as well as other communities throughout the state.

After nearly 31 years with the West Hartford Fire Department, the past six as chief, Allyn said that when he returns from Florida he will still have many professional duties but is also looking forward to spending more time at home.

Allyn was 31 when he began his career with the West Hartford Fire Department in April 1988. He moved quickly up the ranks, becoming an apparatus operator in 1991 and a captain in 1995. He became assistant chief in 1997, and chief in 2012 following the retirement of Bill Austin.

“It would have to be the paramedic program,” Allyn said Tuesday at his retirement luncheon when asked what he considered his greatest accomplishment. Allyn said that he was the first paramedic hired by the department, and at the time there was a committee looking at bringing the advanced life support (ALS) role into the department, but there were contentious issues between the town and the firefighter’s union that could never quite get resolved.

When Allyn became chief, he said that he had built strong relationships with both the town and the union, and also got a federal grant to offset the cost of the additional equipment and training needed. The Town Council unanimously approved bringing the paramedic role in-house to the West Hartford Fire Department in September 2015, and the program took effect on Aug. 1, 2016.

“We just exercised another grant, and bought our first ambulance,” Allyn said. The purchase was approved by the Town Council in September 2017, and the ambulance will be delivered next spring, he said.

As the department fills vacancies, more paramedics are being hired. There are six new hires currently attending the fire academy, and they will begin work in January 2019, Allyn said.

“We need to keep reinventing ourselves,” said Allyn. He said diversification is key, including a greater investment in emergency medical services, as well as in dealing with hazardous materials.

Assistant Chief Mike Sinsigalli is rolling out a community risk reduction program, Allyn said. “There’s a lot we can do for different age groups.”

Allyn said that the West Hartford Fire Department is one of the few departments in the state that has bullet proof vests available for every riding position. They aren’t worn on every call, Allyn said, but since firefighters are first responders to all medical calls, there could be dangerous situations and “they wear them when they need to,” he said.

Allyn likes to play golf, but after retirement he will still be keeping busy in a professional capacity with consulting he does for a Boston-area firm. He’s also an emergency response coordinator on the incident management team for the Department of Health and Human Services. He was recently asked, but unable to go to Guam to assist in the response for Super Typhoon Yutu, and anticipates he will respond to incidents during next year’s hurricane season.

“We’ve been very privileged to have Chief Allyn’s leadership and investment in the fire service the last 30-plus years,” said Assistant Chief Greg Priest.

Priest just joined the West Hartford Fire Department in July, but previously worked for UConn’s fire department and he and Allyn have known each other and worked together in various capacities for many years.

“Chief Allyn has dedicated his life to the fire service and to West Hartford,” Priest said at the retirement luncheon. “From a person with a front row seat, I can tell you that Chief Allyn truly cares about West Hartford Fire and bases his decisions and actions on what he believes is best for the department.”

Sinsigalli echoed those comments. “I’ve worked with Gary for 20 years, and have always known him to have the best interests of West Hartford and the fire department in his heart. It’s really because of his efforts and his pioneering spirit that we’ve moved into the paramedic service.”

In addition to the paramedic service, Sinsigalli said that Allyn’s other accomplishments include forming a regional hazardous materials response unit and the routine use of AEDs on the apparatus.

“He has been instrumental in moving our department forward and we wish him a healthy, well-deserved, and happy retirement,” said Priest.

Town Manager Matt Hart said that he has conducted final interviews with two candidates but has not yet finalized the hiring of a permanent replacement for Allyn. “We’re getting close,” he said Tuesday. He said an interim chief will be named soon and will serve until the new chief comes on board.

Executive Director of Human Resources Rick Ledwith said that 18 applications for the chief’s position had been received, from all over the country. A handful of those candidates were interviewed before the finalists were named.