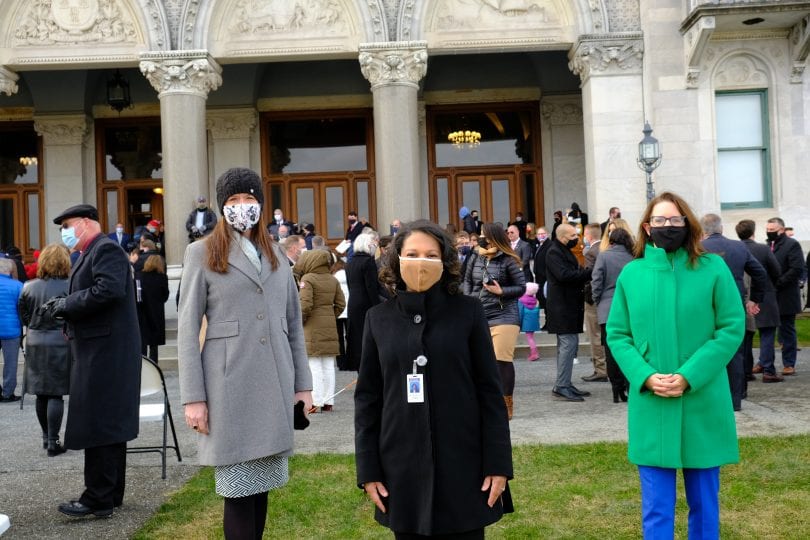 From left: West Hartford's state Reps. Jillian Gilchrest, Tammy Exum, and Kate Farrar at the swearing in and opening of the session on Jan. 6, 2020. Courtesy photo 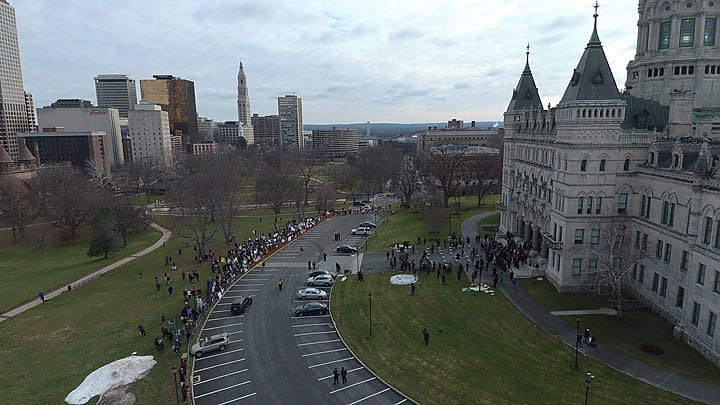 House members were sworn in outside, on the north side of the Capitol. Photo courtesy of CTNewJunkie.com

In an Opening Day staged through remote proceedings and chilly outdoor ceremonies, the Connecticut General Assembly kicked off its 2021 legislative session Wednesday with lawmakers kept at a distance due to the ongoing coronavirus pandemic.

Members of both legislative chambers were sworn in outside the state Capitol building in separate ceremonies. Speeches were kept brief throughout the breezy morning with temperatures in the upper 30s.

“I am honored to have this community’s support and to step into this new leadership role to serve the residents of the 20th House District and Connecticut,” Rep. Kate Farrar, who was elected for her first term in November, said in a statement. “There are many obstacles ahead, but I am ready to get to work for our community and move our state forward.” 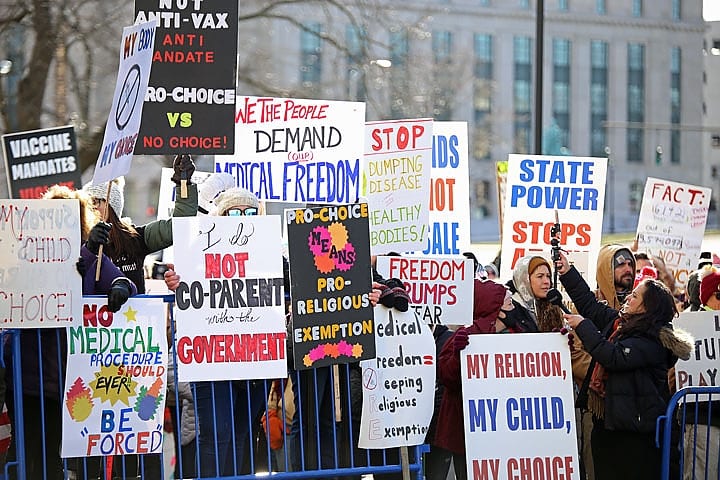 Protestors behind barriers at the state Capitol. Photo courtesy of CTNewsJunkie.com

Hundreds of protesters watched the proceedings from behind metal barriers erected by police. Capitol police charged one of them with breach of peace. They came to object to pandemic-driven public health orders enacted by Gov. Ned Lamont. They protested vaccine requirements in schools and the election loss of outgoing President Donald J. Trump. 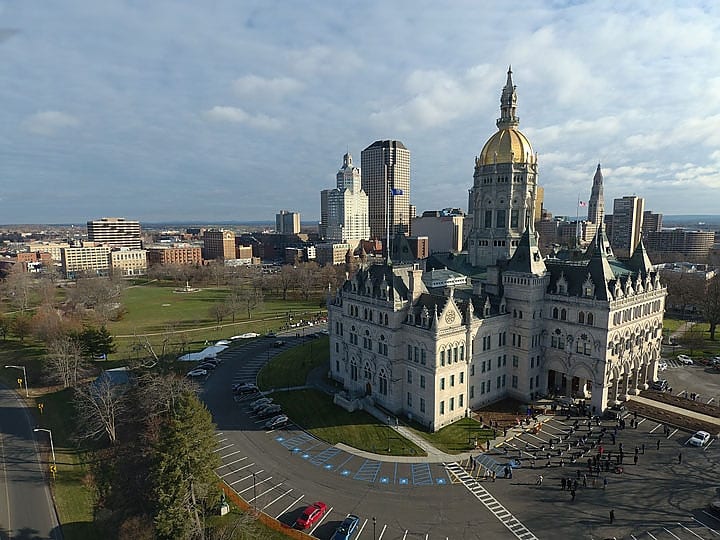 Members of the state Senate were sworn in Wednesday on the south side of the Capitol. Photo courtesy of CTNewsJunkie.com

Standing in the sun on the southern side of the building, the Senate re-elected President Pro Tem Martin Looney, D-New Haven, for a fourth term leading the upper chamber’s Democratic majority. The House formally elected Rep. Matt Ritter, D-Hartford, as the next Speaker of the House. He was sworn in on the North steps of the building by his father, former House Speaker Thomas Ritter. 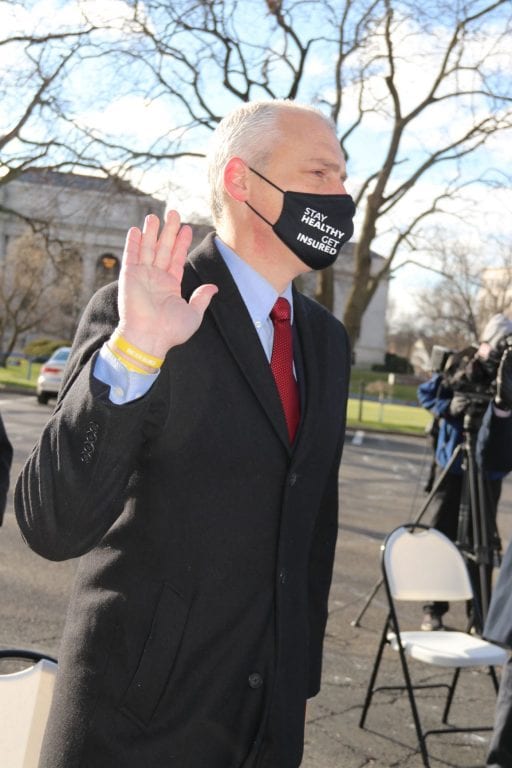 The spectre of COVID-19 hung over every element of the day’s events. After taking the oath, most House members returned to their nearby legislative offices. Ritter addressed a mostly-empty House chamber while members watched on Zoom. 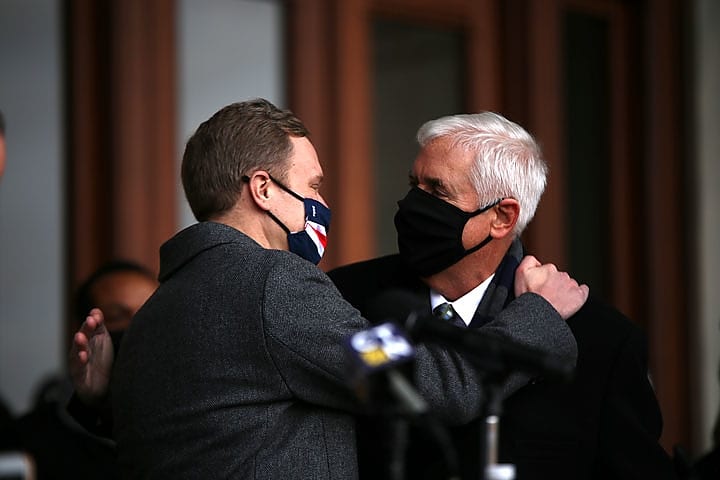 “COVID-19 has taken away so many things from so many people,” Ritter said.

“If you’re fortunate, all you’ve missed is soccer games and basketball games or dance recitals or graduations. If you’re not so fortunate you’ve missed funerals. But I do know this: brighter days are coming in this country and the state of Connecticut,” he said.

In place of the governor’s traditional State of the State address to the General Assembly, lawmakers watched a video of a speech from Lamont which was recorded on Monday. The governor was in his state Capitol office during the broadcast. Addressing legislative leaders in the video, he noted the change.

“Two years ago, as your new governor, you welcomed me into the ‘room where it happens.’ This year, that room has become a ‘virtual room,’” he said.

During the address, the governor acknowledged the more than 6,000 Connecticut residents who have died in the past year as a result of the virus. But he largely sought to strike an optimistic note, praising Connecticut’s residents for their efforts throughout the pandemic. He thanked teachers, nurses, doctors, and members of the National Guard.

“The Connecticut I know is a state which hasn’t and won’t let itself be defined by this crisis,” Lamont said.

During the speech, the governor touched on some legislative priorities for the coming year. He mentioned plans to legalize recreational marijuana and online sports betting. He talked about the importance of modernizing the state’s transportation system and access to quality health care. He said the state was well-positioned to meet its coming budget shortfalls “without draconian cuts or broad tax increases.”

Following the broadcast, Republicans criticized the slick production of Lamont’s video. They also said they would have liked to hear more ideas from the governor to ensure quality education for Connecticut students throughout the rest of the pandemic.

Whichever ideas the legislature chooses to pursue in the next few months, much of that work will be conducted online through virtual committee meetings and remote public hearings. 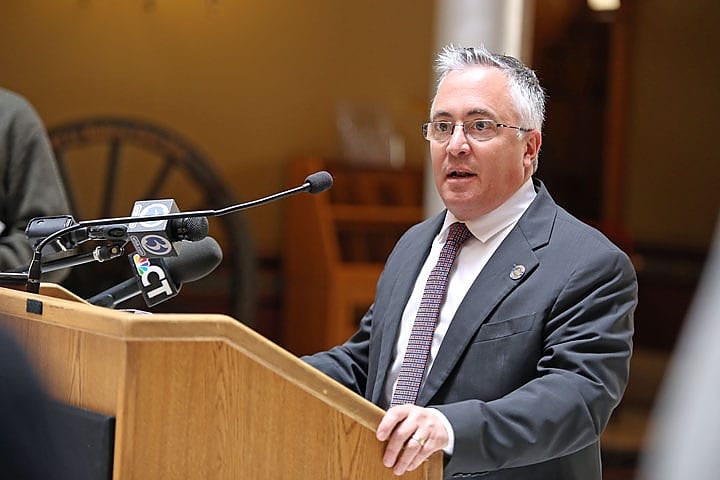 Addressing a largely empty chamber Wednesday morning, Candelora remarked on the protesters gathered outside during the swearing-in ceremonies. He said their shouting was disruptive. It was difficult to hear the proceedings. In one sense, it deprived Ritter of his “day in the sun.” But Candelora said there was another way of looking at the demonstrations.

“That may be the only opportunity that the public will see us in a collective group where they can let their voices be heard. While at times I find it could be frustrating, it could be disrespectful, it brings me back to the point that none of this is about us. The swearing in is a mere formality. What this is always about is the people,” he said.