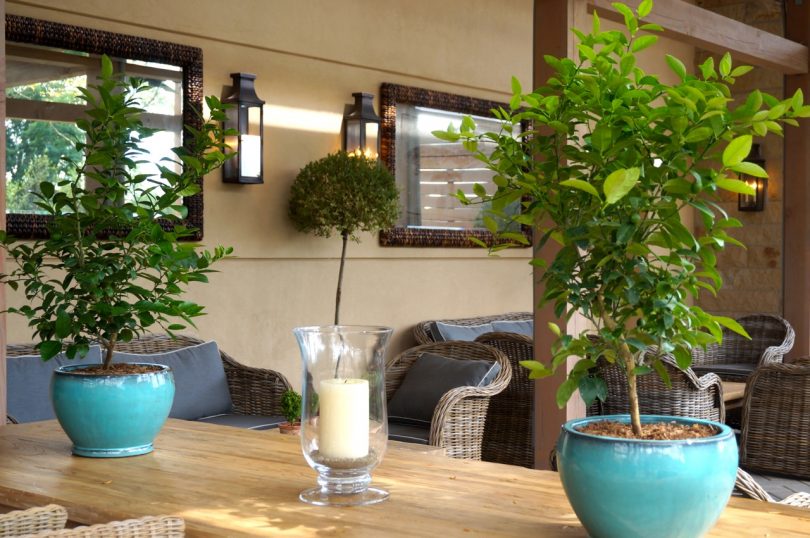 One of the dining areas at Artisan Restaurant in West Hartford is under the pergola adjacent to the garden. Photo credit: Ronni Newton 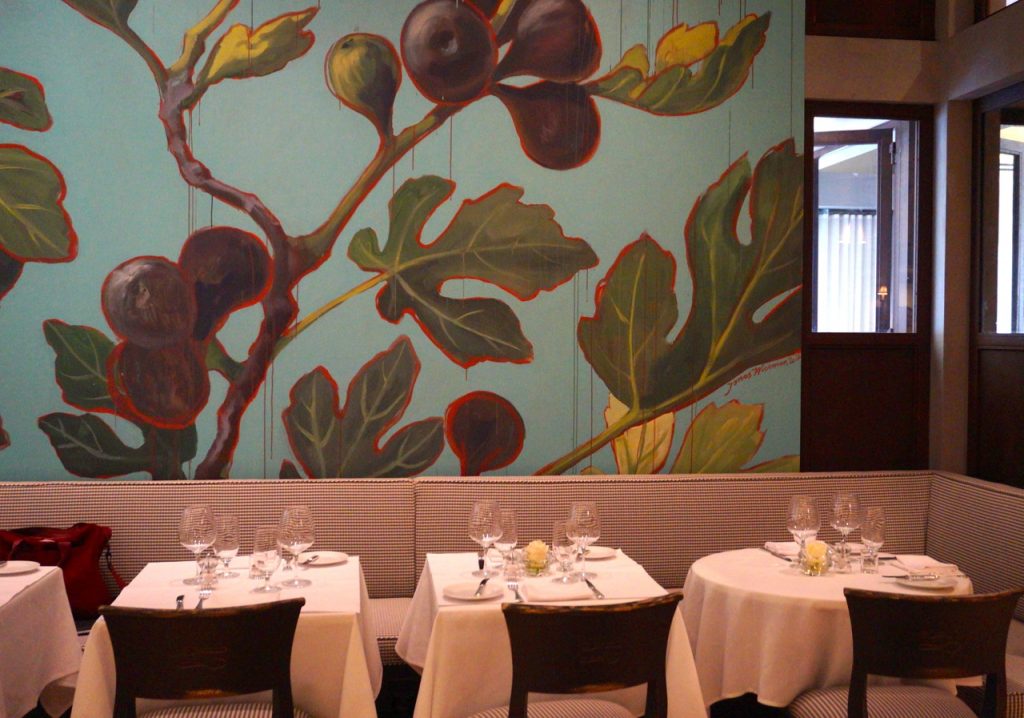 Appetizers and wine with friends at a farmhouse table nestled in a garden of fresh herbs and vegetables … a light dinner al fresco under a shaded pergola lit by mason jar pendants … a beer and a burger in an intimate brick-floored tavern with the backdrop of a cozy fire on one side and a vibrant mural on the other … a full-course meal served in a casually-elegant Scandinavian-style room adorned with a mural of fig trees … a private event in a stunning room illuminated by copper chandeliers that hang from a gold-leaf barrel ceiling. All of these experiences can be had right in West Hartford, in a new restaurant named for the artistic nature of the food as well as the elements that create the unique establishment.

Artisan is a feast for the eyes and the palate, a restaurant that offers a variety of beautiful dining atmospheres and a menu that features fresh-for-the-season New England-inspired and locally-sourced dishes.

There’s something for everyone’s taste in seating as well as food in the distinct outdoor and indoor spaces and a menu that rather than being divided into courses is separated by: “The Garden, The Mill, The Sea, and The Land.” Each of those sections offers “taste and share” options as well as larger entrees. 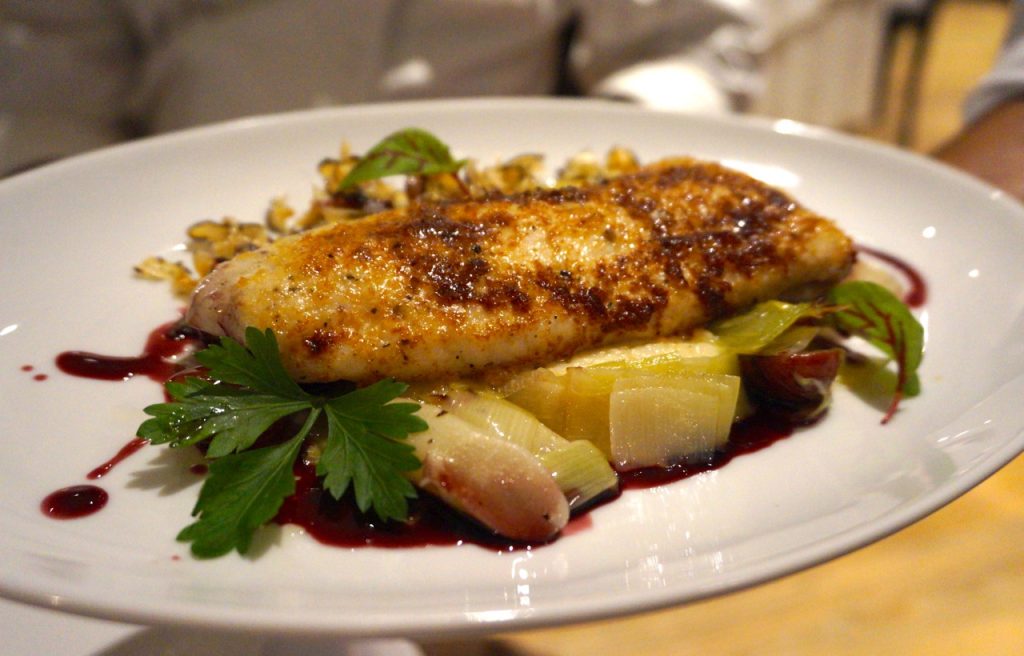 Artisan, located on the ground floor of the Delamar West Hartford Hotel, is the award-winning restaurant’s third location. Others are in the Delamar Southport (CT) and Newfane, VT. All are under the direction of Executive Chef and Partner Frederic Kieffer – who is also the executive chef of L’Escale at the Delamar Greenwich.

Why Artisan? Kieffer said it started with the shell of a restaurant that became Artisan in Southport. “We wanted it to be casual and approachable,” he said, even though the restaurant is located in a luxurious boutique hotel.

The menu focus at Artisan is “New England-inspired cuisine,” said Kieffer, and will vary based on the seasonality of ingredients. Although the menu’s backbone is similar to the other Artisan locations, he said that one of West Hartford’s advantages is being closer to the farmers which allows for the development of deeper relationships.

“The chowder is special to us,” Kieffer said. Ingredients in the “Artisan Seafood Chowder” include oysters, clams, shrimp, and fennel crackers.

The Cioppino, a dish that originated in San Francisco, is prepared with lobster sauce rather than tomato broth as a base.

Unlike many restaurants which offer vegetarian or vegan dishes as a special accommodation or an afterthought, Artisan’s “Garden” section of the menu receives just as much if not more focus than the rest. For those who are gluten-free, dishes can be found throughout all sections of the menu. 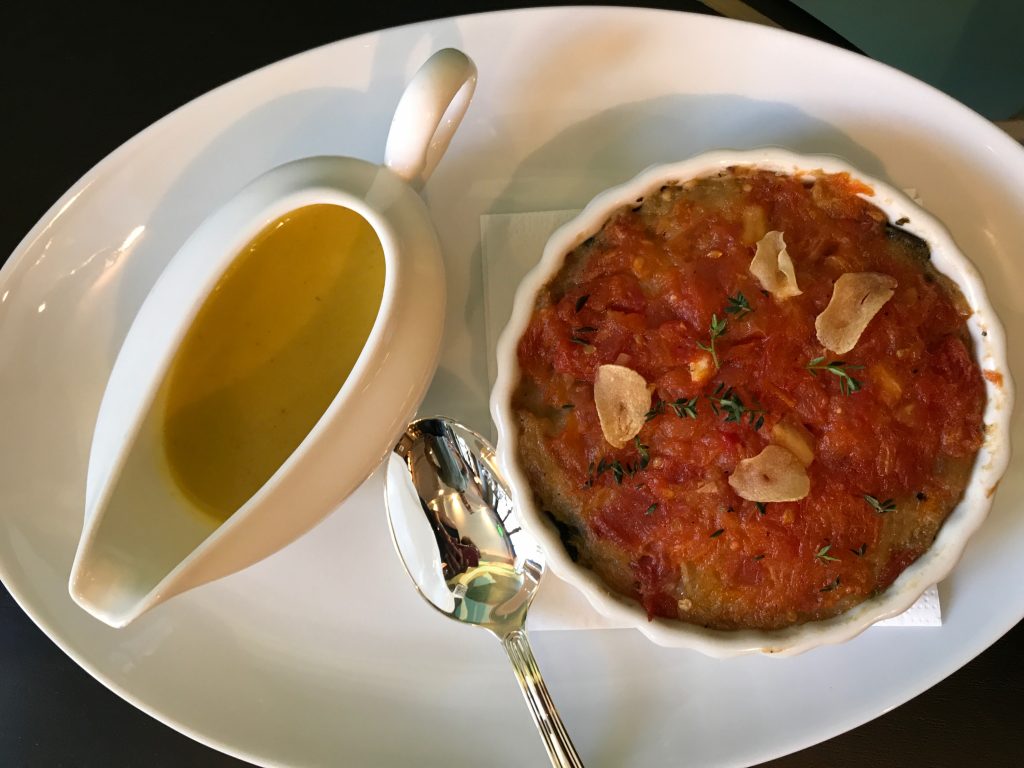 The highlight of “The Garden” section is undoubtedly the “Baked Vegan Tian.” The ingredients will change with the seasons, Kieffer said, and currently includes spinach, eggplants, beans, and tomatoes, topped with a Romanesco sauce made from yellow peppers and almonds. “Tian means layers,” Kieffer said. “A lot of steps go into that dish. It’s not an afterthought.”

Many of the dishes on the menu have a story.

The shrimp in the “Royal shrimp and grits” is Stonington red shrimp. Kieffer said it’s one-of-a-kind, and there’s only one boat in the world – the Neptune –  that harvests the catch of 400-2,000 pounds per year.

“[The red shrimp] was found as a fluke because of scallop over-fishing,” Kieffer said, when the boats had to go farther and farther out to find their catch. The red shrimp has to be frozen on the boat because it’s harvested so far from shore. The dish’s grits are Anson Mills Carolina middlins – corn grits not rice grits.

“It can’t be just the expected,” Kieffer said of his menu.

The dessert menu wasn’t available for viewing yet, but Kieffer said it’s highlighted by a uniquely Artisan cheesecake. “Our cheesecake is very fluffy … served in a pot,” Kieffer said. It’s also seasonal, and currently topped with a late-harvest tomato marmalade. Other seasonal toppings will include pumpkin in the fall and dark chocolate in the winter.

Chocolate ganache and almond tarte can also be found on the dessert menu.

Chef de Cuisine Tom Kaldy, who has a background in French cuisine and spent many years in some of Las Vegas’ most highly-rated restaurants, comes to Artisan from Cavey’s in Manchester. He’s been working hand-in-hand with Kieffer for the past four or five months, and spent several months working at Artisan’s Southport location.

The chowder is a must-try, Kaldy said, but he has some other favorites. “I’m very excited about the charred leek ravigote with fried egg and Nordine’s bacon,” he added. That dish is from “The Garden” section of the menu.

Kaldy also said he’s very pleased with the “ancient grains and duck egg” which can be found in “The Mill” section.

The certified organic products are some of the best ingredients that can be found, some of which are gleaned directly from the garden right outside the door. “We have respect for the product … We’re not doing that to be trendy but it’s the way it should be,” said Kaldy. 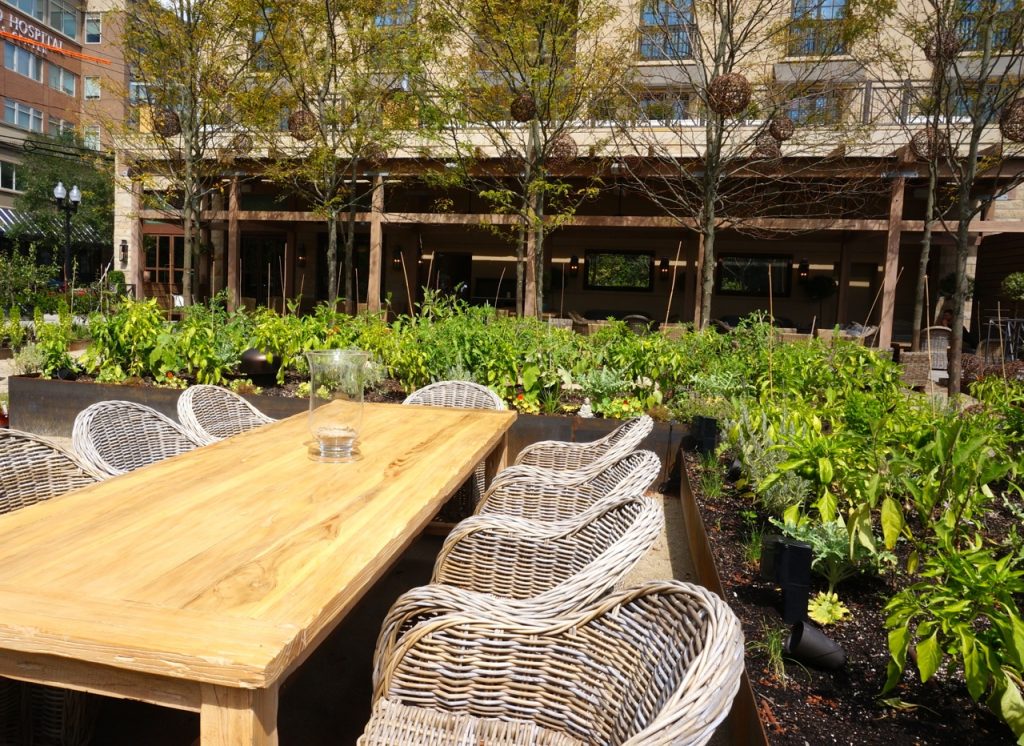 “There are little touches, things you don’t see often in Connecticut,” Kaldy said. “I plan on this being the best restaurant in West Hartford.”

In addition to the food, guests have a spectrum of options in which to dine.

The restaurant’s garden is an oasis in West Hartford’s Blue Back Square, ringed by espalier – pear trees with branches grafted so that each yields six different types of fruit, and trained to grow in a straight line like roses on a trellis.

Inside the garden white and purple eggplant, a rainbow of peppers, and a variety of herbs are ready to be harvested for each day’s dishes. The garden, which is managed by gardener Renée Giroux, is an integral part of the restaurant’s mission of serving local and seasonal dishes. Giroux, formerly of Gilberti’s in Easton, now has her own farm in Warren, CT. 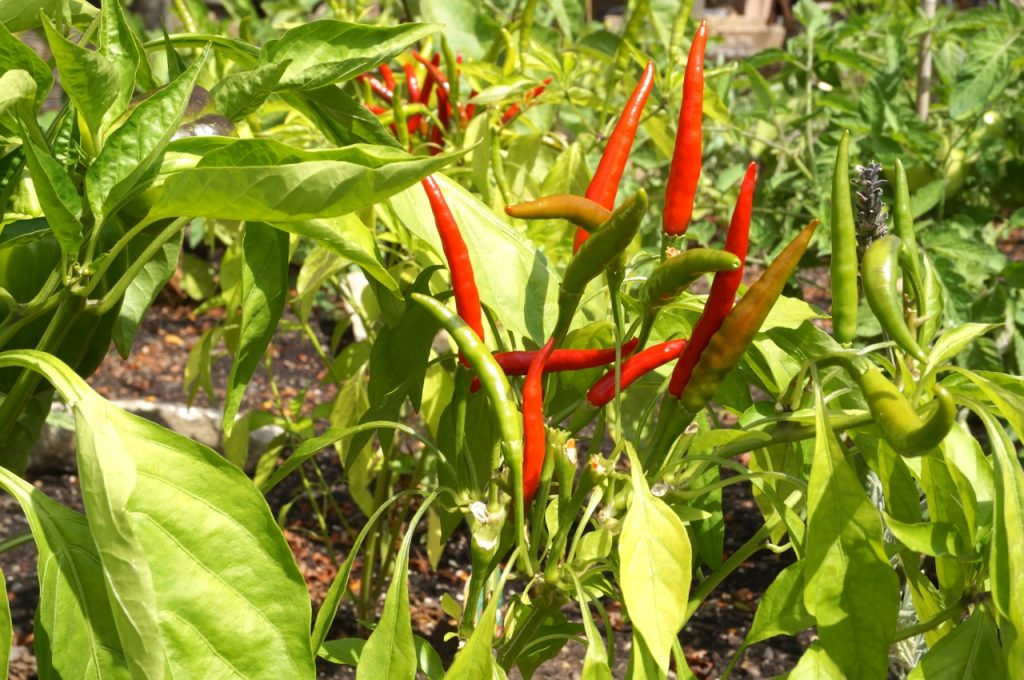 Weather permitting, diners can stroll on a path through the garden before settling into one of Artisan’s outdoor spaces – the pergola or the garden area, which in the evening is lit with willow branch lanterns –  to enjoy food and drink. There are a total of 70 seats outdoors.

The first space is the 30-seat Tavern, which has a floor created from 9,000 arranged in a beautiful herringbone pattern that surrounds a pewter bar crafted by L’étainier Tourangeau of Montbazon, France.

Diners can order off the regular menu as well as from a Tavern menu that includes burgers (on homemade English muffins), sliders, and fish and chips. Just as much attention is paid to those dishes, Kieffer said, with homemade pickles, ketchup, ice cream, and sorbet.

One wall of the Tavern boasts a colorful mural of large flowering tobacco fields – an image that pays homage to one of the region’s original industries and was custom-painted by Stockholm artist Jonas Wickman. 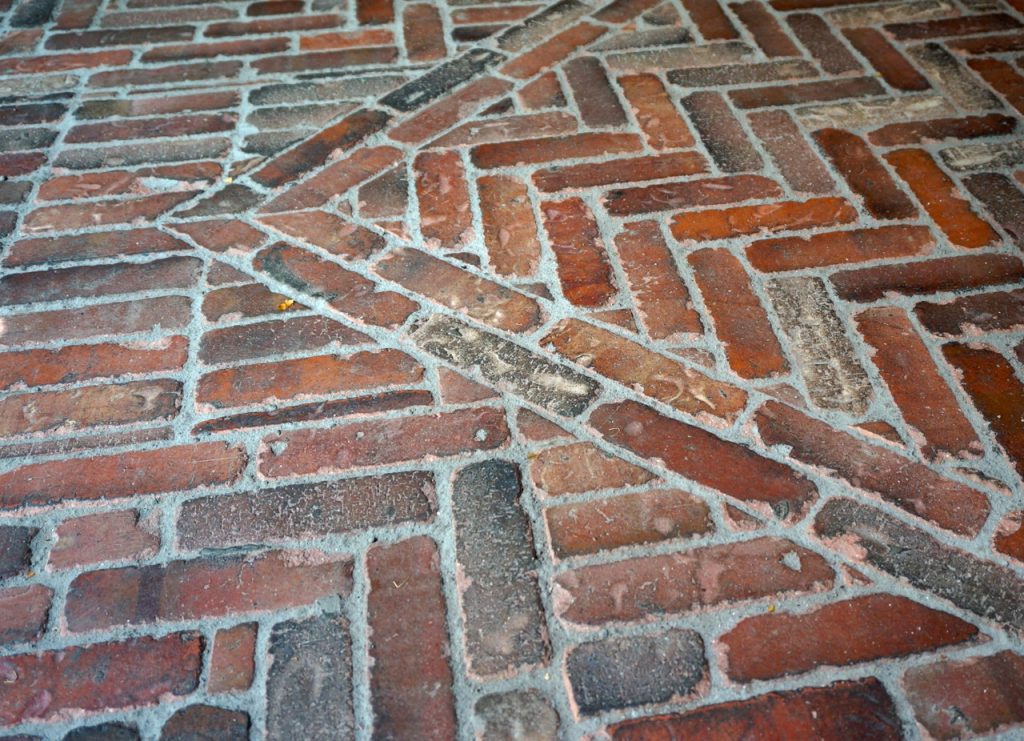 In another corner, guests can relax while sipping their drinks on classic Gripsholm-style sofas and chairs in front of the specially-made Swedish farmhouse tile fireplace designed by Gabriel Keramik of Timmernabben, Sweden.

The 50-seat dining room is more elegant, but Kieffer said it’s designed to be extremely approachable and welcoming, like a dining room in a home. Along one wall is another oversized mural by Wickham, this one depicting fresh figs, reminiscent of the garden that is just steps away.

Another wall of the dining room has been reproduced to look like the red-tinted walls of Windsor’s tobacco barns, complete with uneven boards to allow for air flow. 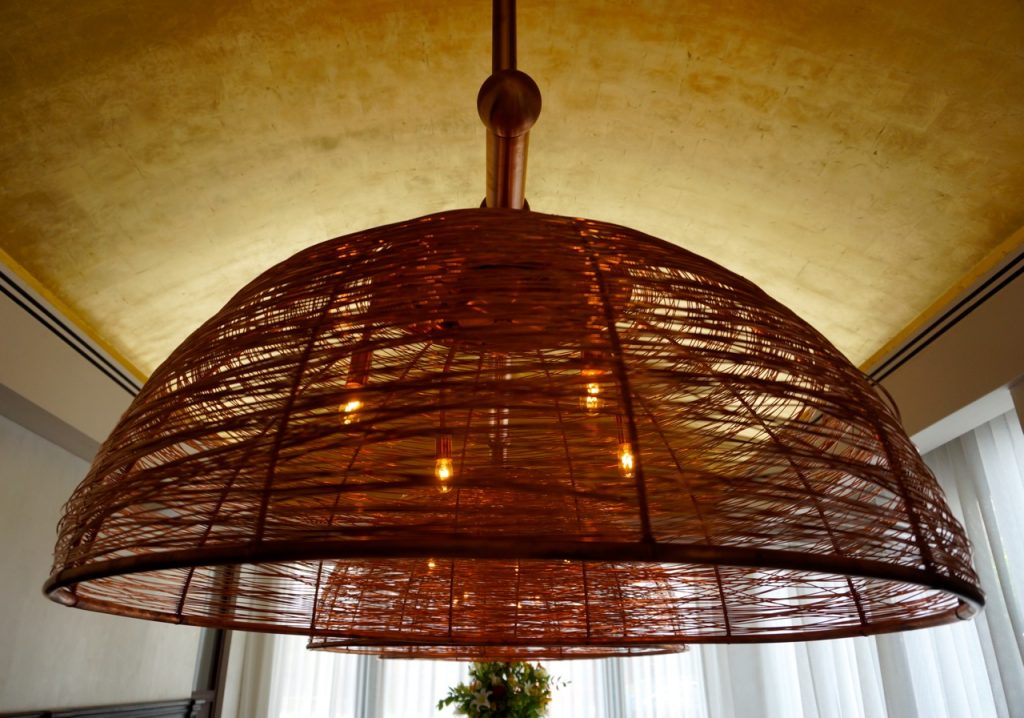 The most elegant feature of Artisan in the breathtaking 16-seat private dining room, accented by handmade copper-wire chandeliers suspended from a gold-leaf barrel ceiling.

As executive chef of Artisan, Kieffer is also responsible for Delamar’s banquet operations, which will begin in December. He said he plans to hire a banquet chef who will follow the same criteria – a chef with an a la carte restaurant background who will focus on the quality rather than just quantity of the food.

The attention to detail for the banquet operations even extends to the serving pieces, and Kieffer said a special line of chafing dishes has already been procured.

Artisan will also be open to the public for breakfast. A continental breakfast is included with a hotel stay, but guests can upgrade to a cafe breakfast, Kieffer said.

In addition to Kieffer, Artisan’s other collaborators include restaurateur Rick Wahlstedt (owner of L’Escale in Greenwich, as well as Le Bilboquet, Japonais, and Le Colonial) and Greenwich Hospitality Group Founder and Partner Charles Mallory.

Wahlstedt, in a news release announcing the restaurant’s opening, said that Artisan “is a natural extension of the growing food-culture and fine living in West Hartford. This opening is the culmination of all the attention and consideration local purveyors, patrons and, yes – food artisans – have been giving to elevate the culinary experiences in this region.”

Mallory said the opening of Artisan West Hartford is the culmination of the team’s vision. “We have been fortunate to be able to put together a very strong local team, who will execute their talent in a truly beautiful space, and with an outdoor dining and garden area that is unparalleled,” he said in the announcement. “The goal of delivering world-class food and service to a la carte and banquet customers is challenging, but I am very confident of our teams ability. The seamless synergies between the hotel and the restaurant will make staying in the hotel, eating at Artisan, or hosting an event large or small a pleasure.”

Artisan opens to the public for dinner at 5 p.m. on Sept. 7, and will be open seven days a week. Dinner will be served from 5-10 p.m. on Sunday through Wednesday, and from 5-11 p.m. on Thursday through Saturday. The bar will remain open late.

Reservations can be made by calling 860-937-2525. More information will also be available on the Artisan website, www.ArtisanWestHartford.com. 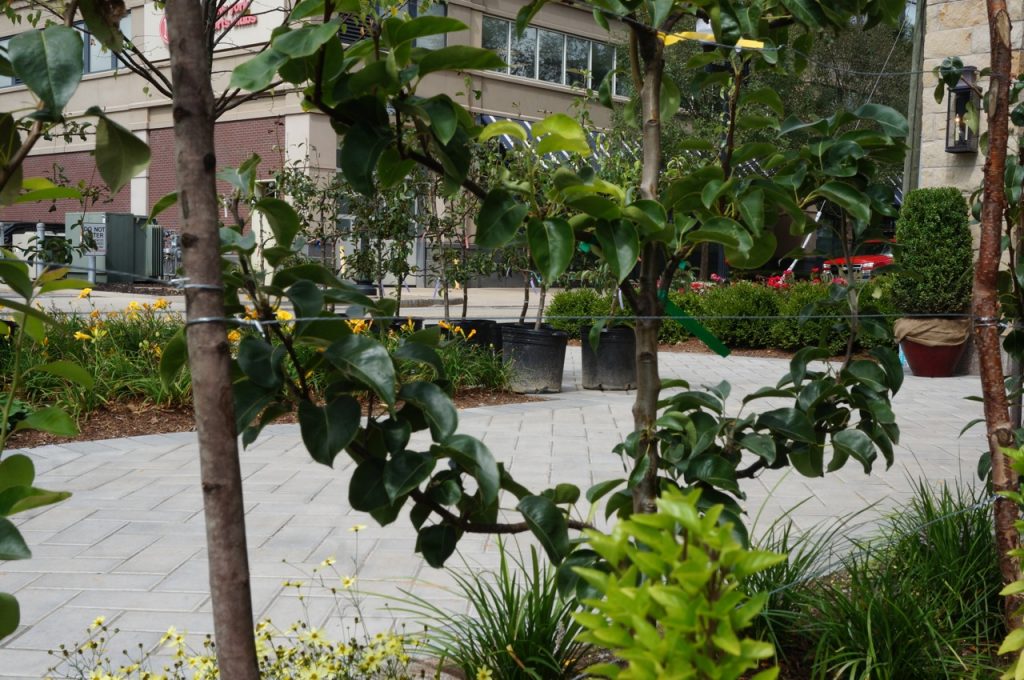 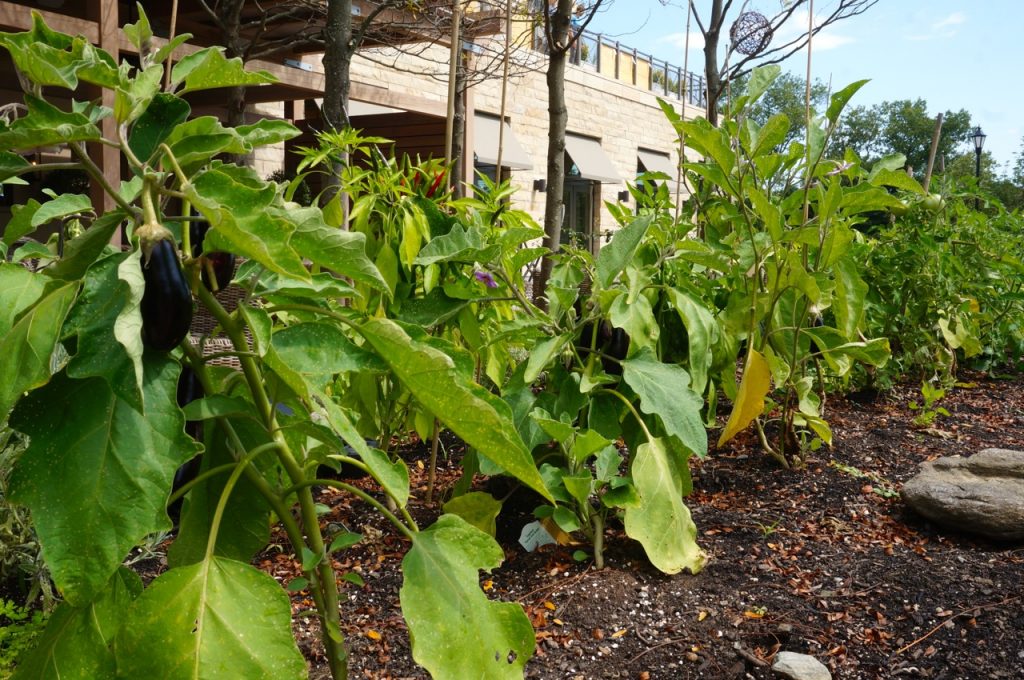 Eggplant, peppers, and herbs are ready for harvest in the garden at Artisan Restaurant in West Hartford. Photo credit: Ronni Newton 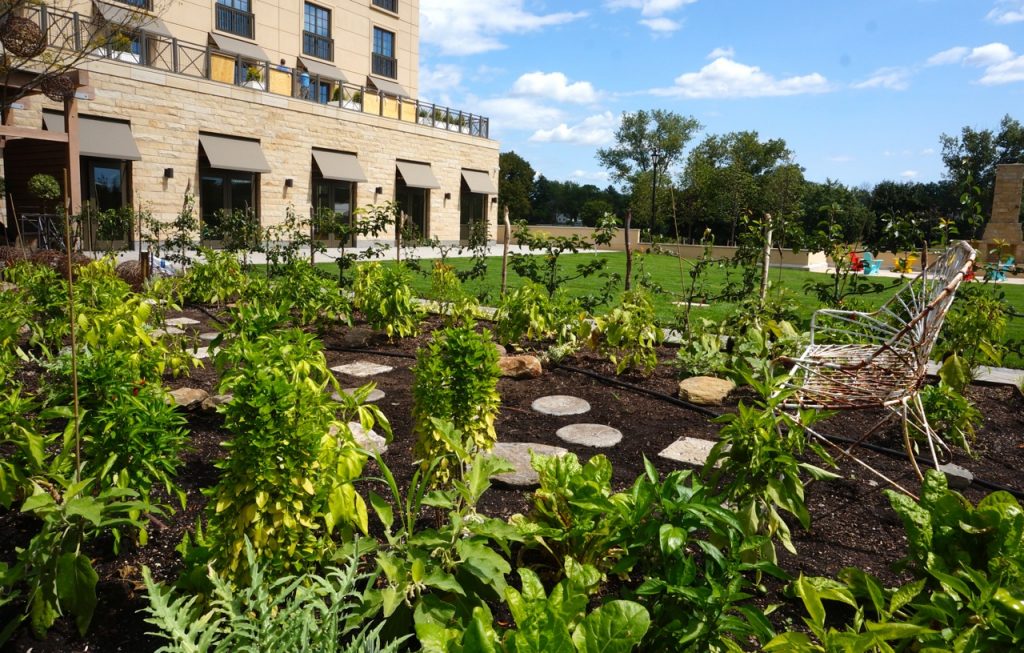 A path winds through the garden at Artisan Restaurant in West Hartford. Photo credit: Ronni Newton 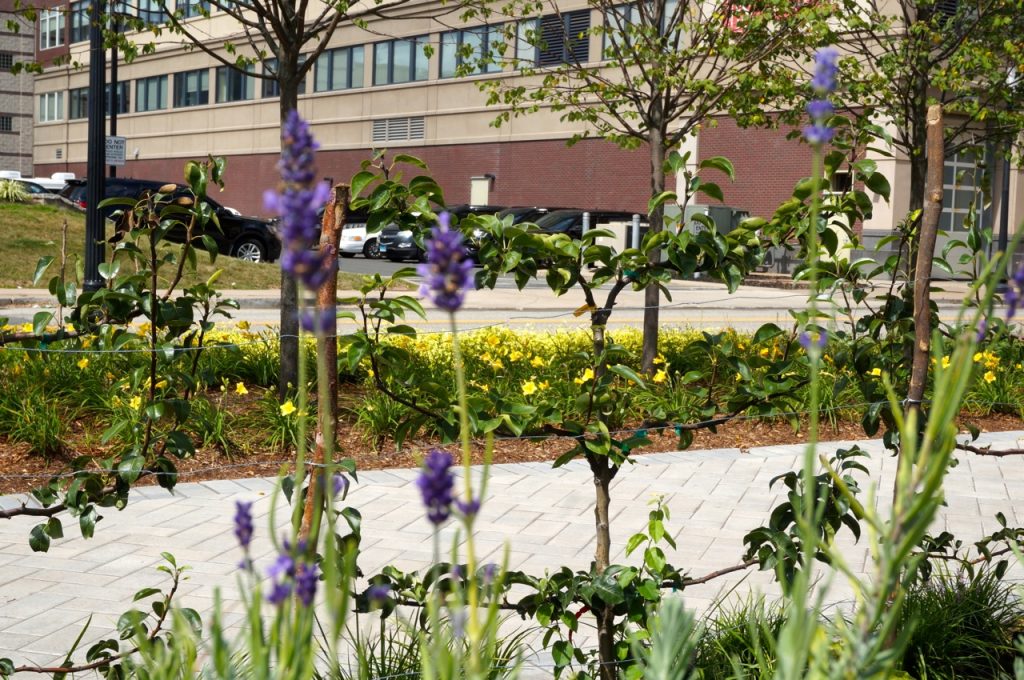 Guests can sit amid lavender in the garden at Artisan Restaurant in West Hartford. Photo credit: Ronni Newton 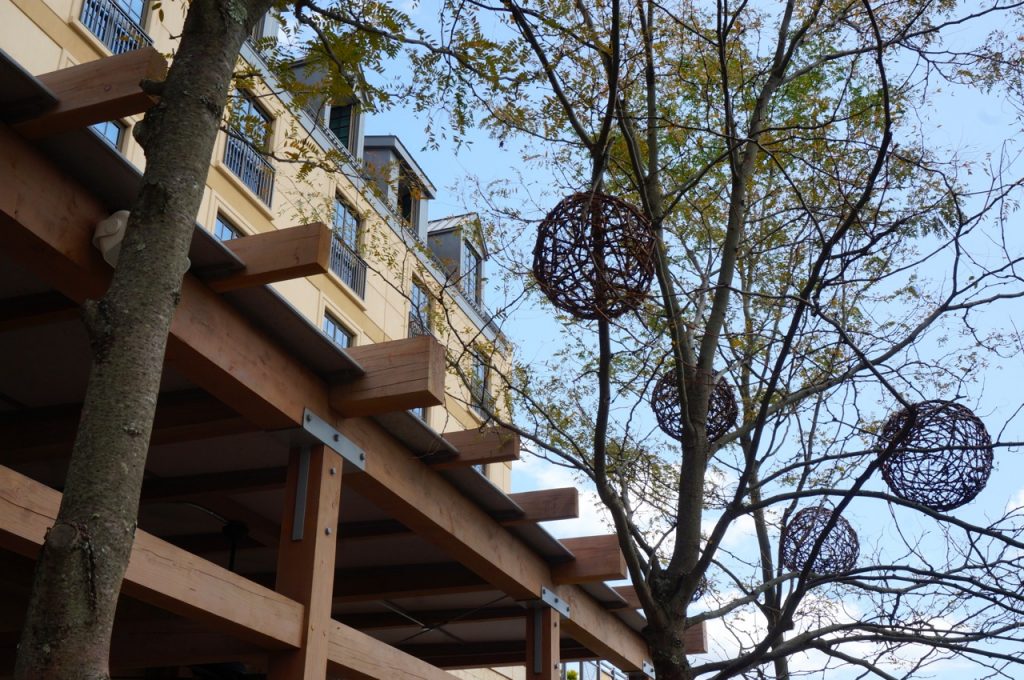 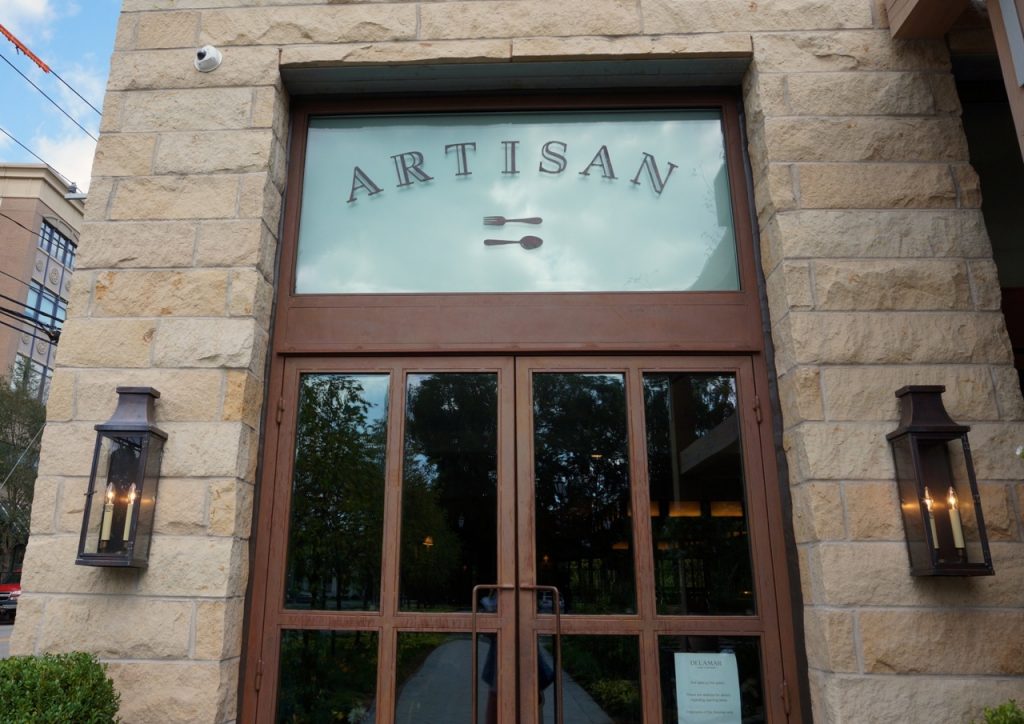 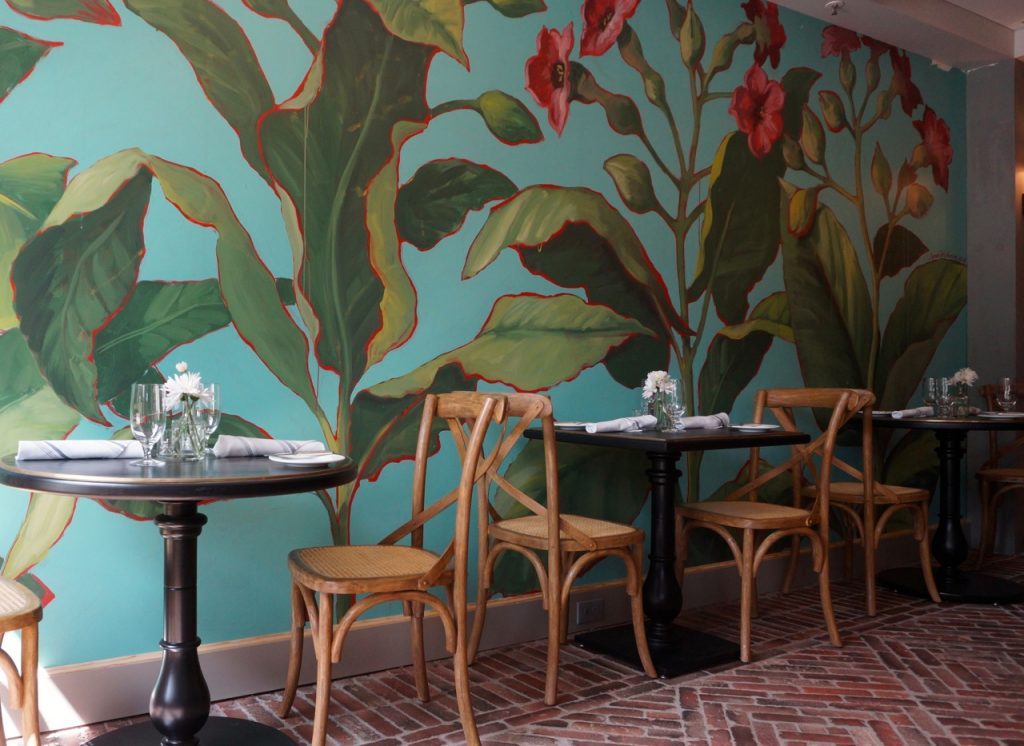 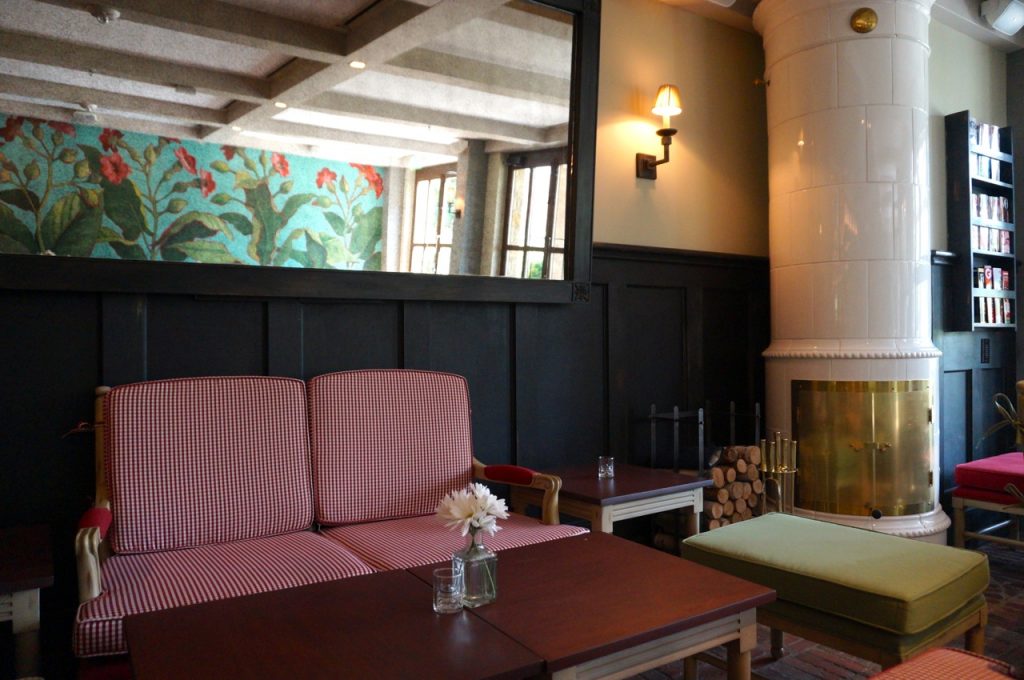 One corner of the Tavern room at Artisan Restaurant in West Hartford includes a custom-built fireplace with technology from Sweden to radiate heat throughout the room. Photo credit: Ronni Newton 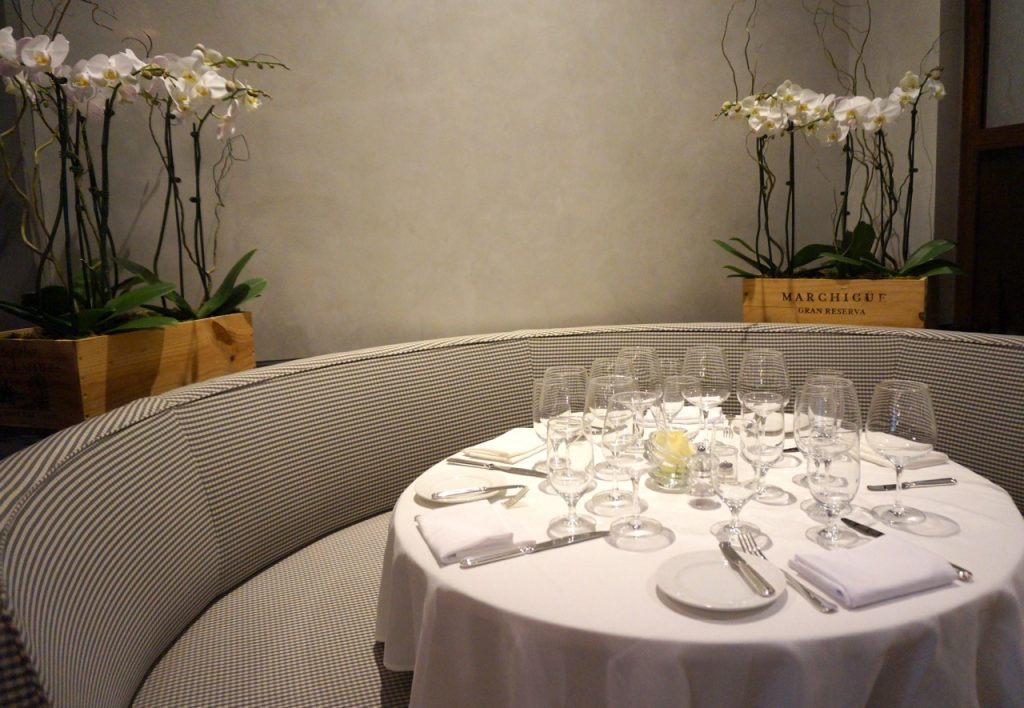 An intricate plastering technique that dates back to Roman times was used to create the marmorino plaster that adorns the walls at Artisan Restaurant in West Hartford. Photo credit: Ronni Newton 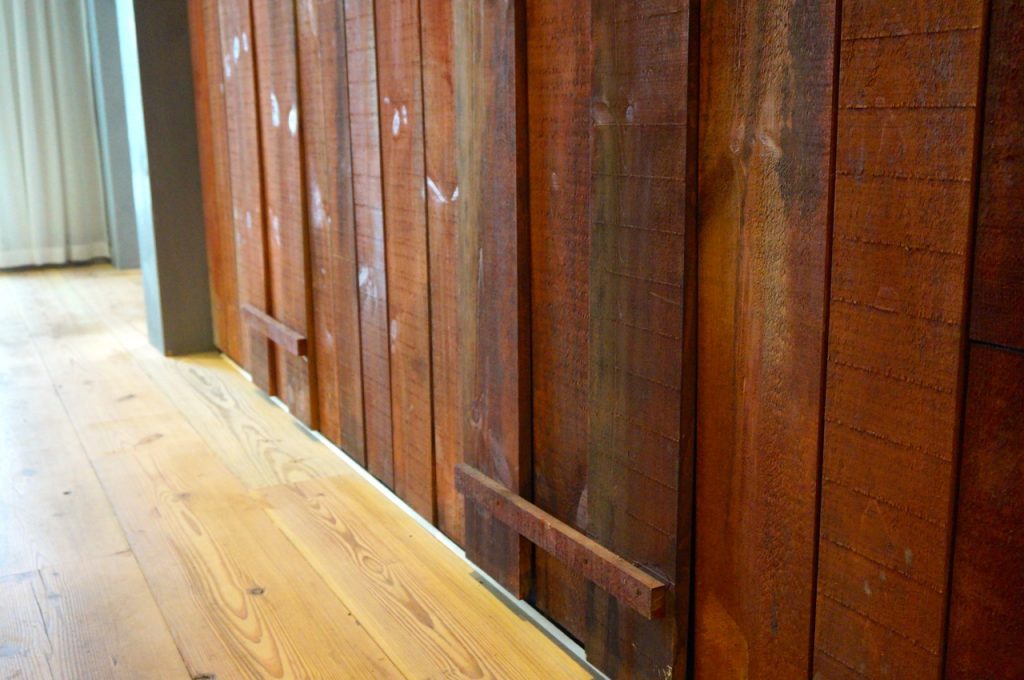 One wall of Artisan Restaurant in West Hartford is a reproduction of a Windsor tobacco barn. Photo credit: Ronni Newton 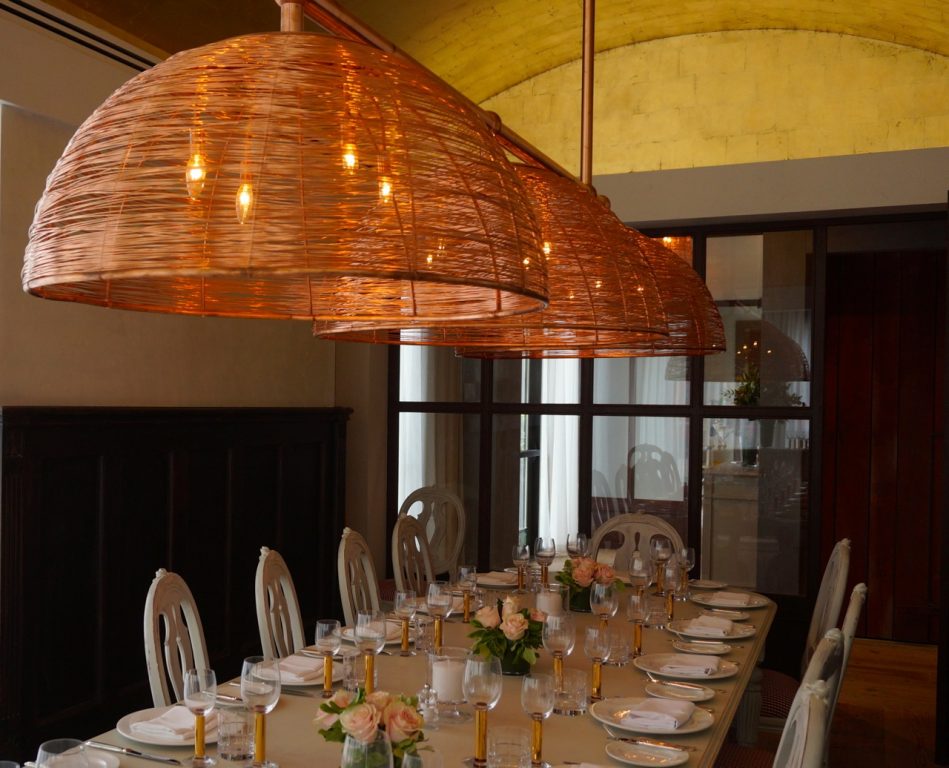 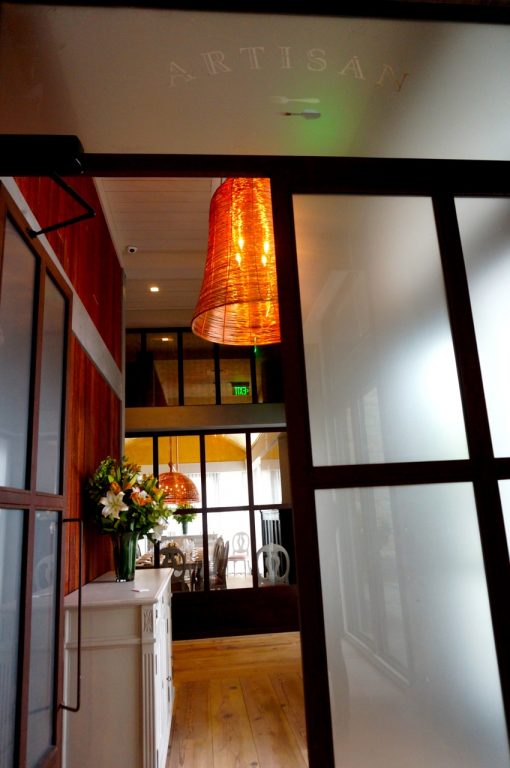 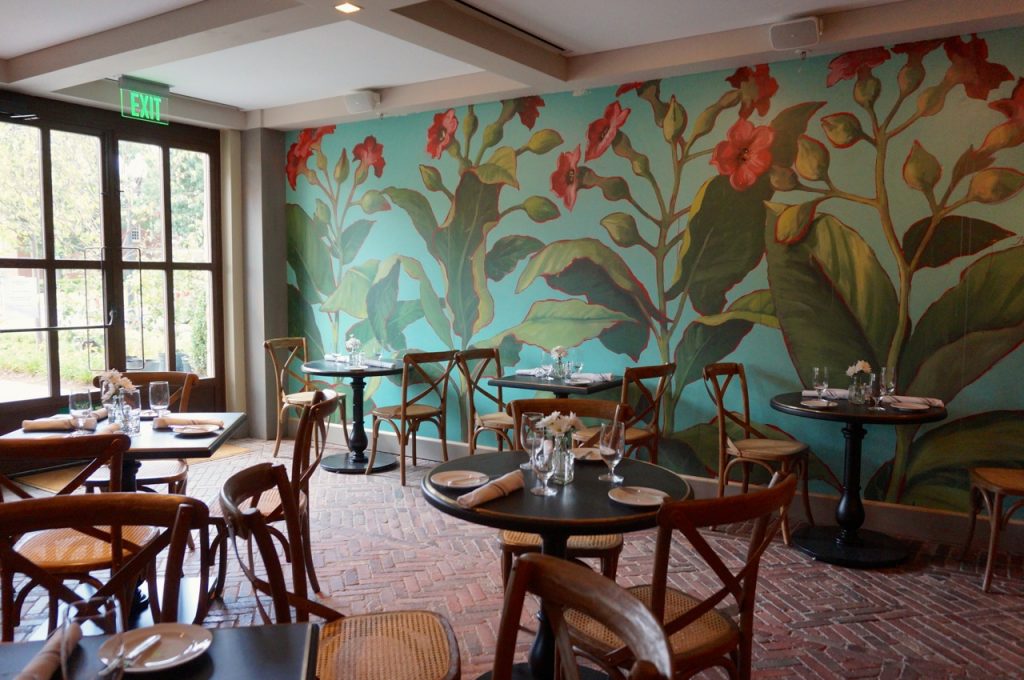 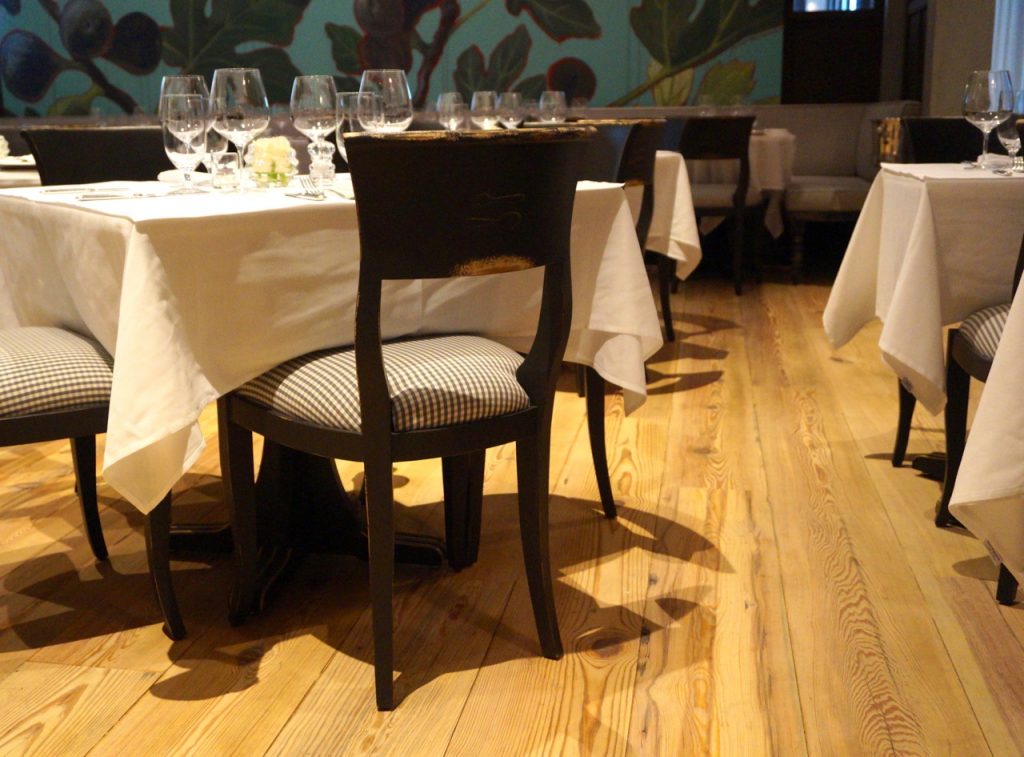 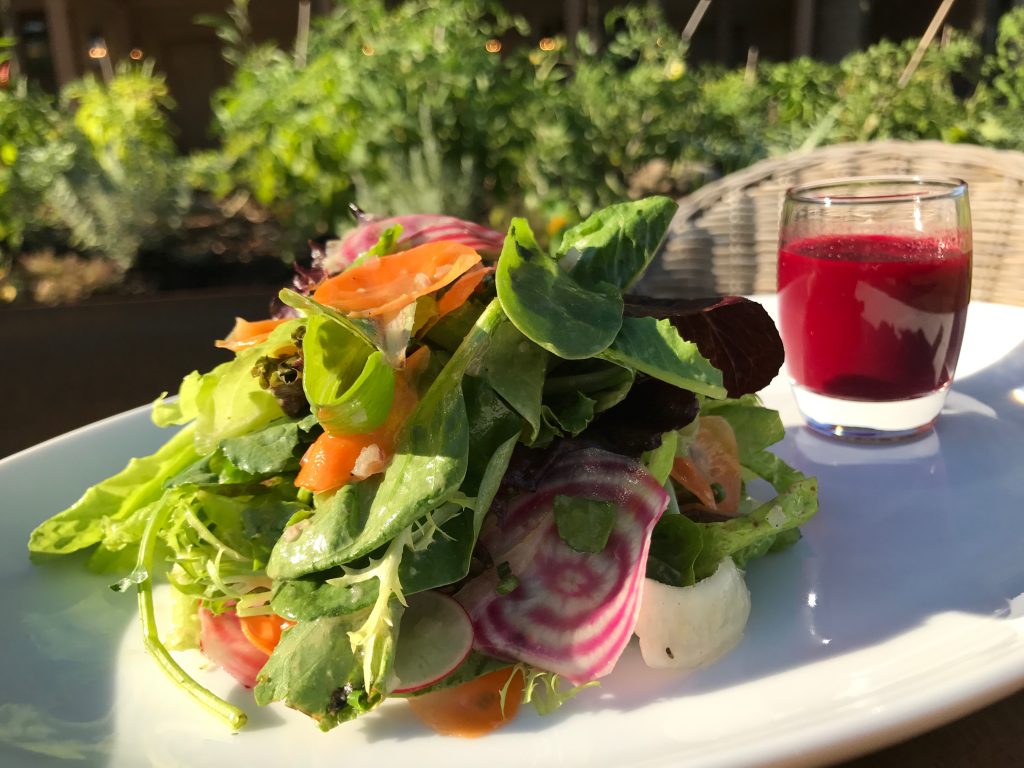 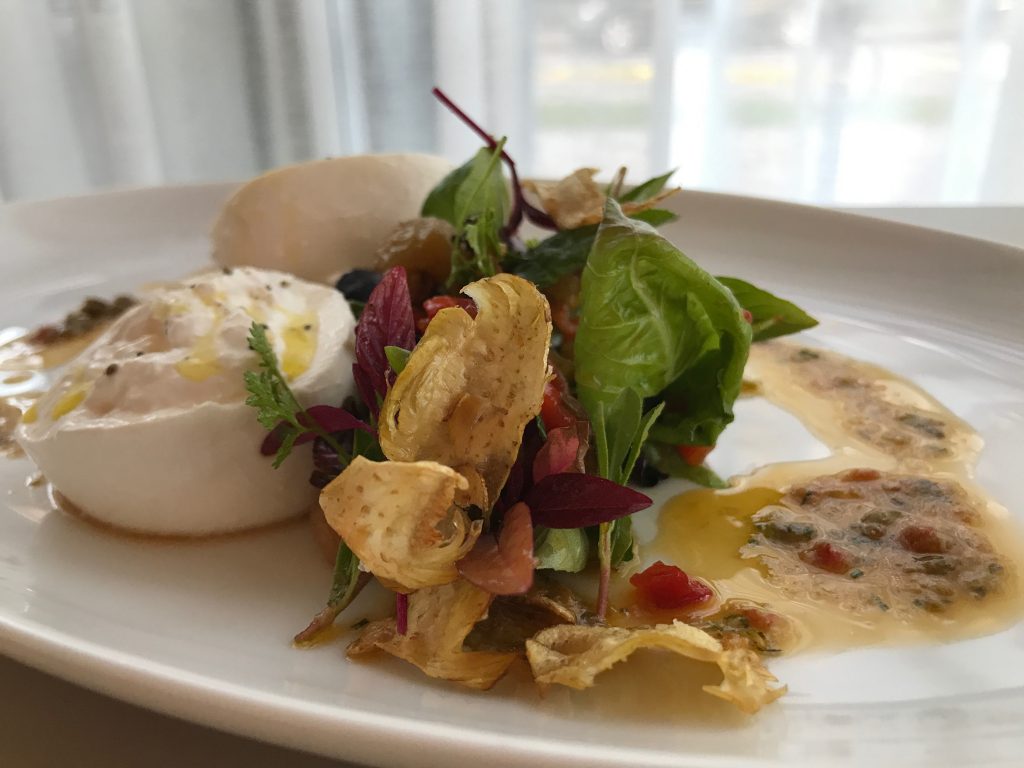 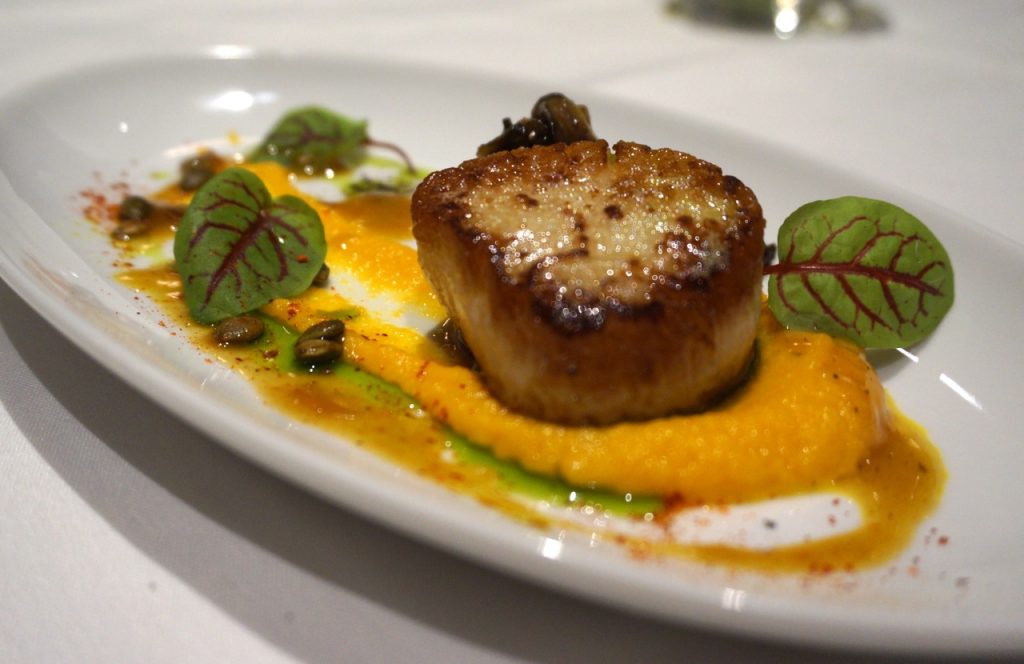 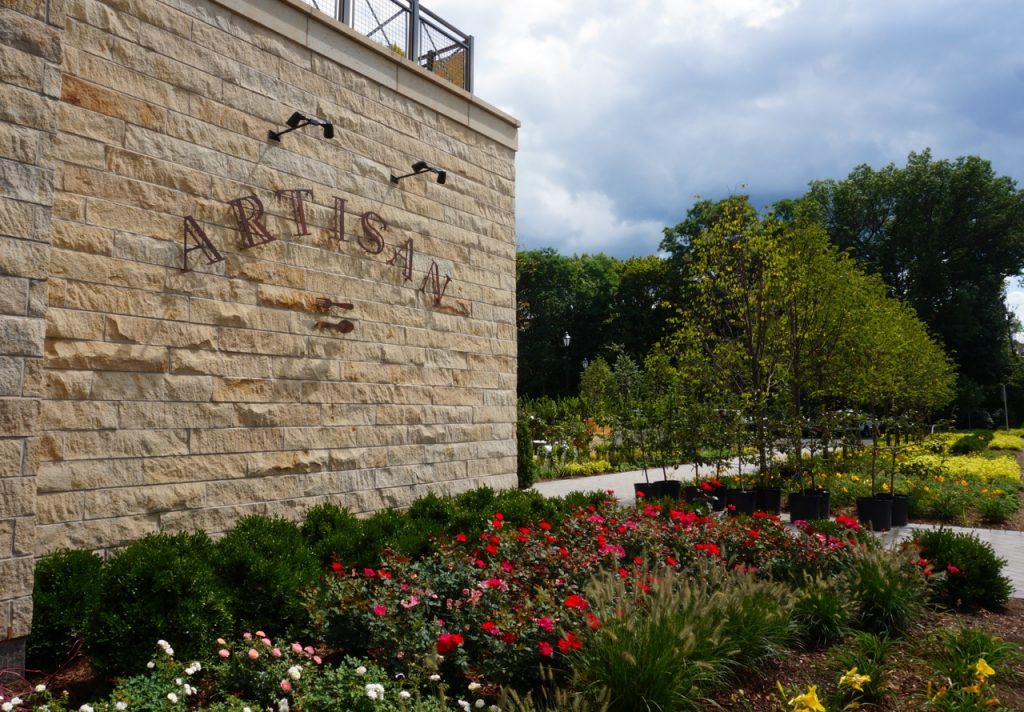