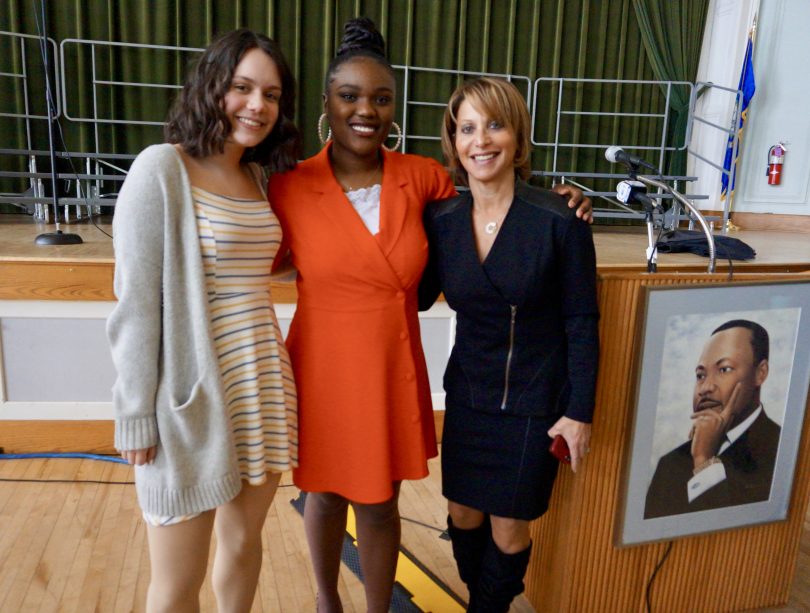 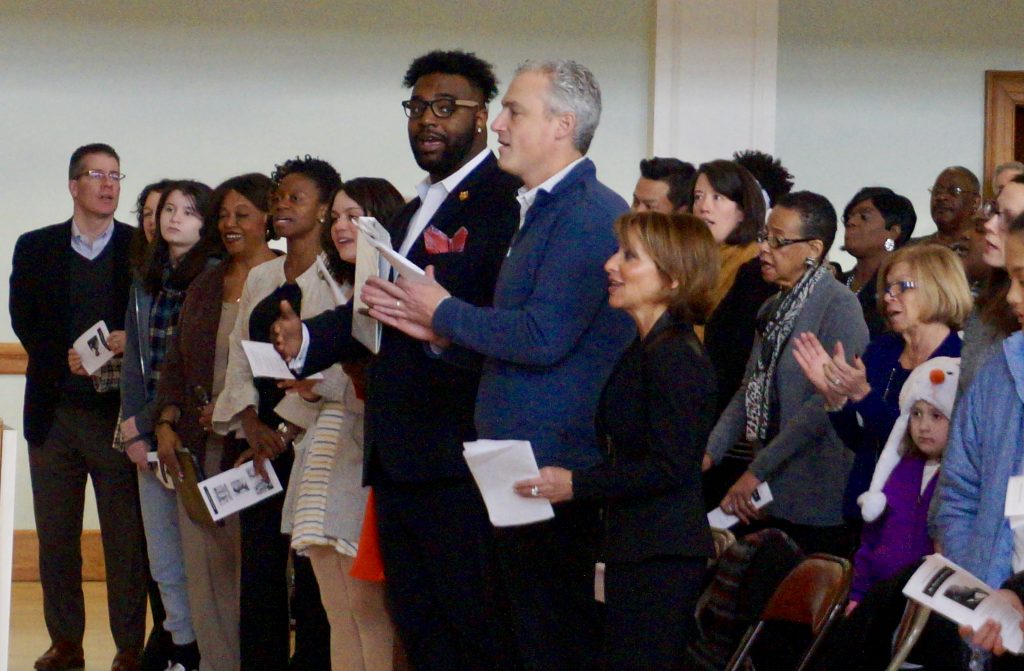 Words of wisdom written and spoken by Dr. Martin Luther King Jr. resonated through the West Hartford Town Hall auditorium on Monday morning, as one speaker after another – students from Conard and Hall high schools, Mayor Shari Cantor, State Treasurer Shawn Wooden, U.S. Sen. Richard Blumenthal, and keynote speaker Patricia Wilson Pheanious – shared why King’s inspiring messages from more than a half-century ago are as important and relevant as ever today.

“We come together today … to enrich our souls and be inspired to be better, more welcoming, and to make our community a more beloved community, ” said West Hartford Mayor Shari Cantor as she welcomed all who came out to attend the town’s 23rd annual celebration of the esteemed civil rights leader on a bitterly cold morning.

“Thank you for not just hearing but for actively listening to our inspirational speakers,” Cantor said. “As Dr. King said, our lives begins to end the day we become silent about things that matter.” She urged the community to commit to volunteering and helping each other. 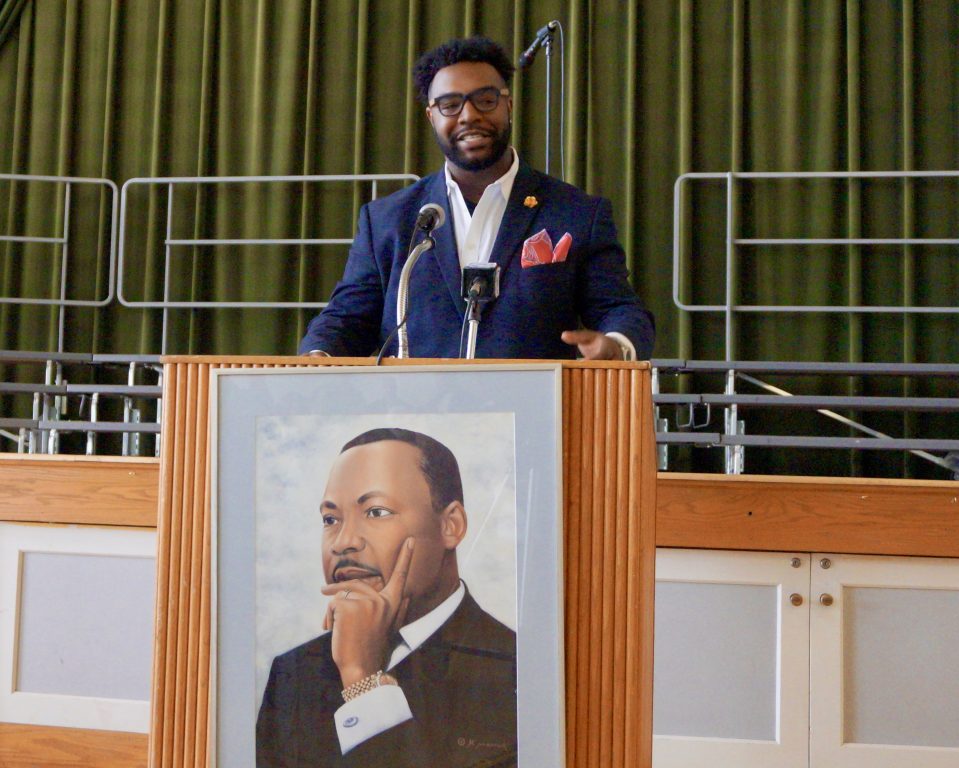 This year’s ceremony was emceed by Henley Solomon Jr., who gave one of the student perspective speeches in 2014. A former Open Choice student who graduated from Conard High School, Solomon is now a senior at Sacred Heart University majoring in English and theater arts.

Solomon touted the benefit of having received a public school education in a town like West Hartford. “This town is a true testament of how diversity means unity and diversity does not mean the lack of unity … We are truly, as John Winthrop would say, a city on a hill,” he said.

Rabbi Jim Rosen of Beth El Temple gave the invocation, before the selected student speakers stepped up to the podium to provide their perspectives on Dr. King.

Bobo said that as a self-proclaimed “history geek,” she was so excited to be chosen to give her perspectives, and although she uncharacteristically struggled to get started on her speech, as she worked and researched, one word kept coming up – leader.

“King wasn’t just a leader, he redefined it,” Bobo said. 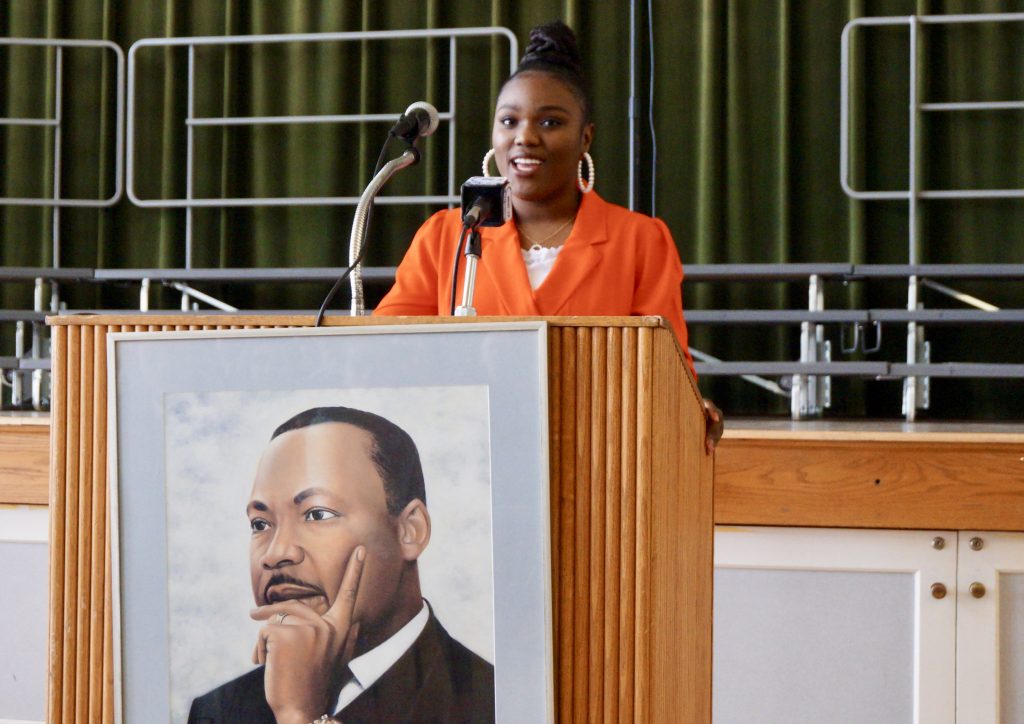 The three characteristics of leadership which King exhibited were focus, perseverance, and building a strong team, she said.

“Someone once told me when life gets blurry adjust your focus,” Bobo said. “[King] saw a problem and decided to create a solution rather than adding to the problem. … King didn’t perceive his circumstance as a dead end but rather a new challenge to conquer. … King had a vision, he was going to make a difference.”

King acted with purpose, Bobo said. “A true leader develops when times are tough,” she said.

King was up against racism, she said, and “knew he was going to have to make great sacrifices because nothing worth having comes easy.” The sign of a true leader is “you have to be patient and steadfast until you receive results,” said Bobo.

The third element of leadership King exhibited was “building a right team.” King kept the “best of the best” around him at all times, and supported him and his vision, separating himself from negativity, said Bobo.

King sacrificed his life so that we could live ours, Bobo said. “We have come a long way, and we have a long way to go. … If you see something wrong do something.”

Bobo closed with a message from King to take action: “If you can’t fly then run, if you can’t run then walk, and if you can’t walk then crawl, but whatever you do you have to keep moving forward.” 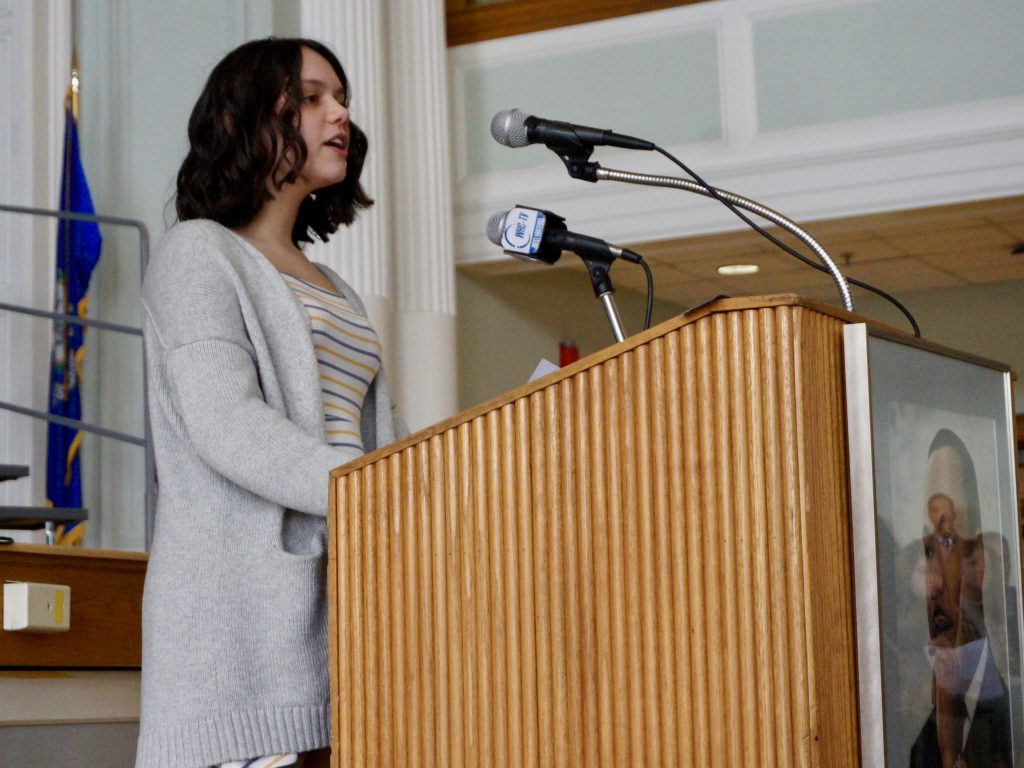 Hall student Mica Lovell said that one reason she was nervous about accepting the honor of speaking at the town’s Martin Luther King Day celebration is because she is white.

“But I had a realization, when I thought about the recent conflict within the NFL, and the controversial movement of players kneeling during the National Anthem to protest police brutality,” said Lovell. “I thought about how I was waiting for the white players to begin kneeling alongside their teammates, but those players were few and far between. People who are marginalized, discriminated against, or treated unfairly for any reason shouldn’t have to defend their rights and stand up to inequality by themselves. Because it’s 2019, now is the time that everyone can join the ‘Black Lives Matter’ movement, and anyone can go to the ‘Women’s March,’ and everyone is welcome at ‘March for our Lives,’ and all people are welcome to join the #MeToo movement. People are standing up for their values and beliefs, not because every controversy in society directly affects them, not because all of these issues hurt them specifically, but because they know certain treatment of particular marginalized groups is simply not just.”

Lovell said that change does not come from silence, “change comes from strong voices, with powerful words, and action. Change is the only thing that keeps us moving forward.”

Lovell noted that today’s activists who engage in peaceful marches and demonstrations are very much like King.

“Americans speak out even when it feels like no one wants to hear our voices. Martin Luther King Jr. said, ‘I came to the conclusion that there is an existential moment in your life when you must decide to speak for yourself; nobody else can speak for you,'” said Lovell.

There has been so much progress, Lovell said, and while today most Americans view the segregation and racism that that was prevalent in the 1950s and 1960s, and which King fought against, as a disgrace, there is still inequality.

“I hope that later in life we can look back and be appalled that white supremacy is still present in 2019, there are sti​ll hate crimes and antisemitism, that Latina and Hispanic women make 53 cents to every white man’s dollar, and that someone who is black is seven times more likely to be incarcerated than someone who is white,” Lovell said. “I think it should be seen as an urgen​t issue that people are discriminated against for race, religion, gender, disabilities, sexual orientation, socioeconomic class, and for infinitely more reasons.”

“Martin Luther King Jr. once said that, ‘Our lives begin to end the day we become silent about things that matter.’ So I hope that everyone can learn something from Dr. King and never let your voice be silenced again,” said Lovell.

State Treasurer Shawn Wooden said that now more than ever we need to reiterate King’s call to action – and his messages of love, courage, and hope.

U.S. Sen. Richard Blumenthal, who was not originally scheduled to be part of the program, was given a chance to speak to the audience. While it’s a day off for many, he noted, “For anybody interested in social justice, today is a day ‘on,’ not to mourn, not to regret, not to give up, but to celebrate.”

Alluding to the current impasse in the federal government, Blumenthal added a bit of political commentary. “We don’t need to build walls,” he said. “Martin Luther King was about building bridges, he was about bringing us together.”

While King won the Nobel Prize for peace, Blumenthal noted, “He was a fighter for justice.” 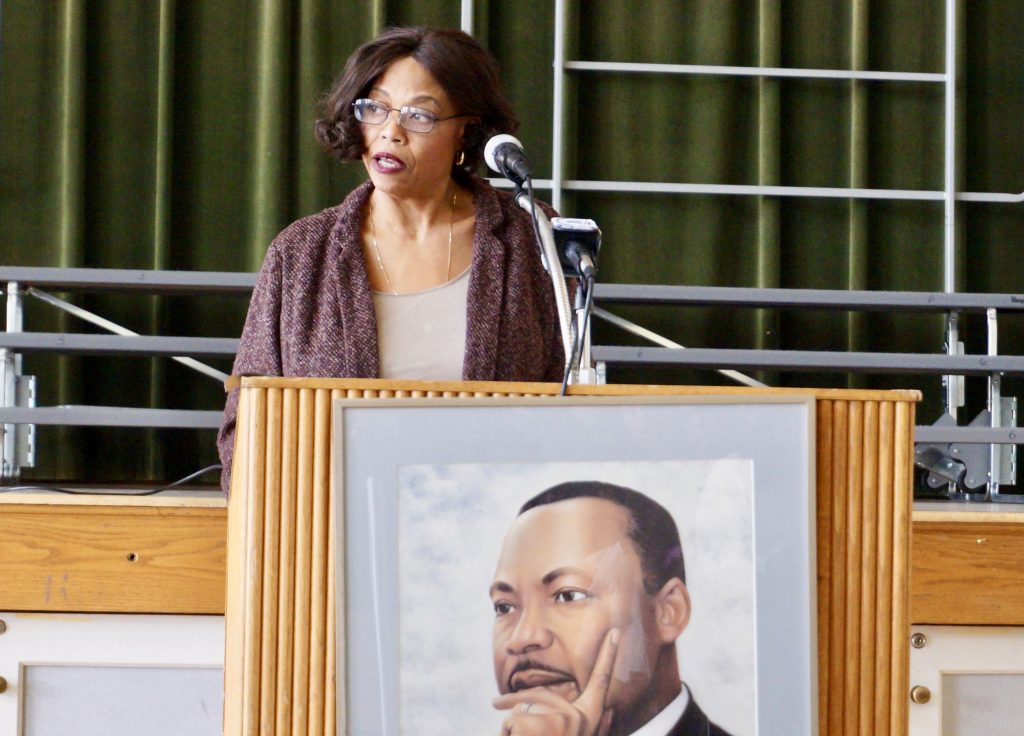 Wilson Pheanious, who is from Ashford, described a timeline of her childhood set against the backdrop of the civil rights movement. The year she was born, 1952, was the first year that no one was lynched, she said. She spoke of Rosa Parks, and the civil rights marches of the 1960s, the passage of the Voting Rights Act, and the “black power” movement.

She was 18 in 1968, when Martin Luther King shared his joy of seeing the mountaintop, and then was assassinated – leading to more riots.

“It’s been 51 years since Dr. King died, and in those few years I’ve reaped the benefit from the pebbled road he traveled and stumbled so that folks like me could glide.”

Wilson Pheanious said that she cried with joy when Barack Obama was elected president, thinking that King’s dream had been realized.

Unfortunately it wasn’t, she said, and said that today we are living in a more hateful time. “We face again battles that I thought we had won long ago. … Since our beloved country has been driven to make itself great again, hate crimes have gone up by 17 percent.”

New words, and labels, have been given acceptability, Wilson Pheanious said, and once again she weeps for black and Latino men and their children.

But while Dr. King is gone, Wilson Pheanious said, his legacy, words, and deeds live on.

She ended her speech with some words of wisdom – words taken directly from King’s memorable writings and speeches.

Her final message from King: “Make a career of humanity; it will enrich your spirit as nothing else possibly can, it will give you that rare sense of nobility that can only spread from love …”

In celebrating Dr. King, Wilson Pheanious said, “We pray for a future that will live up to his dream, and support us and fellow man.”

Student musicians also entertained the audience, with a prelude by the Hall Jazz Combo, and an interlude by the KP Singers from King Philip Middle School performing James Taylor’s “Shed a Little Light.”

The Hall High School Choraliers closed out the program with “Beautiful City” from “Godspell” and “Abide by Me,” before leading the entire audience in a rousing group sing of “We Shall Overcome.”

Many members of the audience lingered after the program, viewing artwork and essays by elementary students from throughout West Hartford Public Schools that filled the hallways of Town Hall, and enjoying snacks and beverages provided by the Elmwood Senior Center. 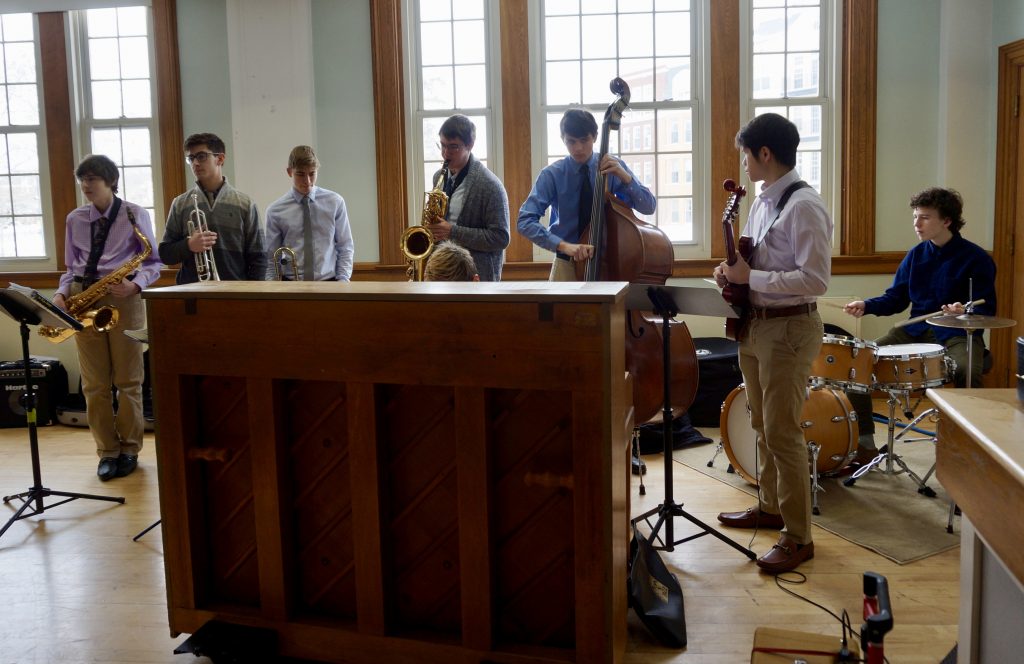 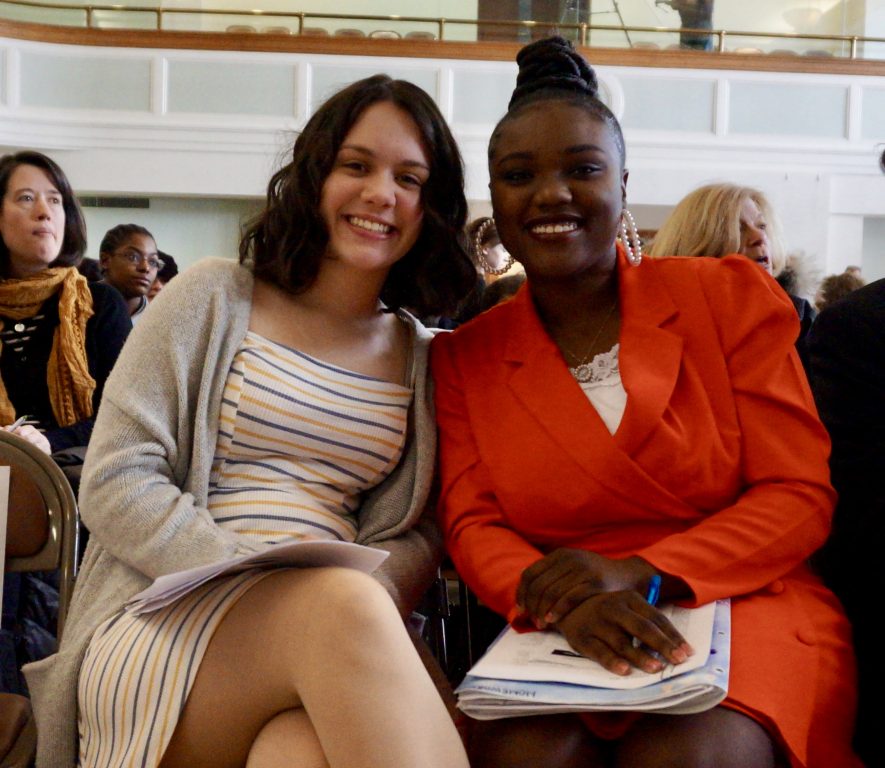 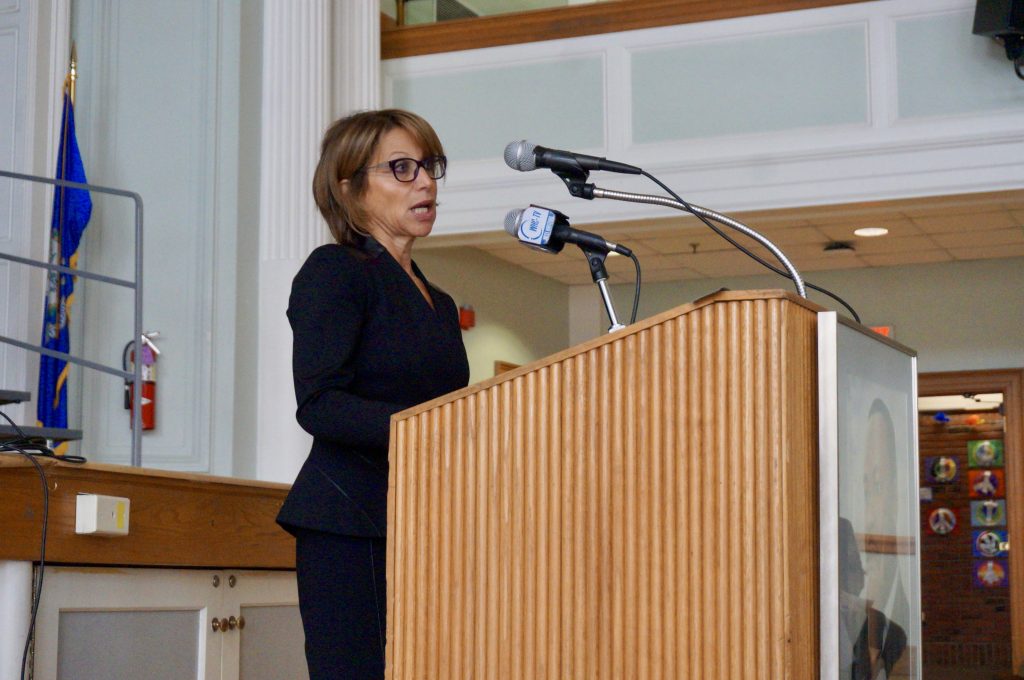 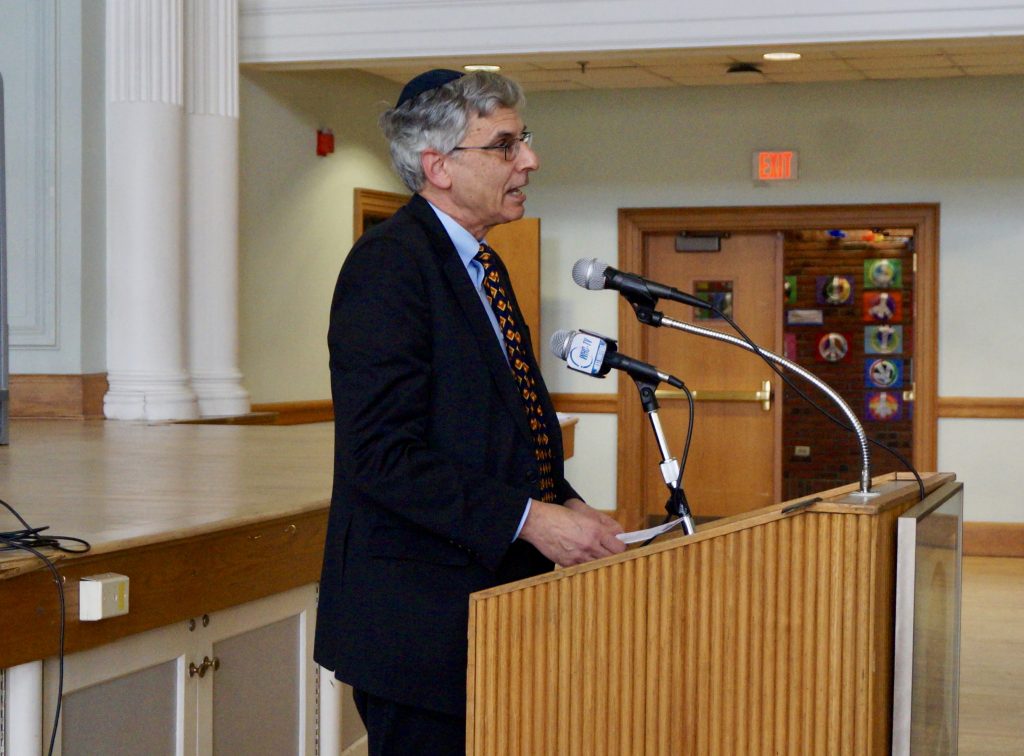 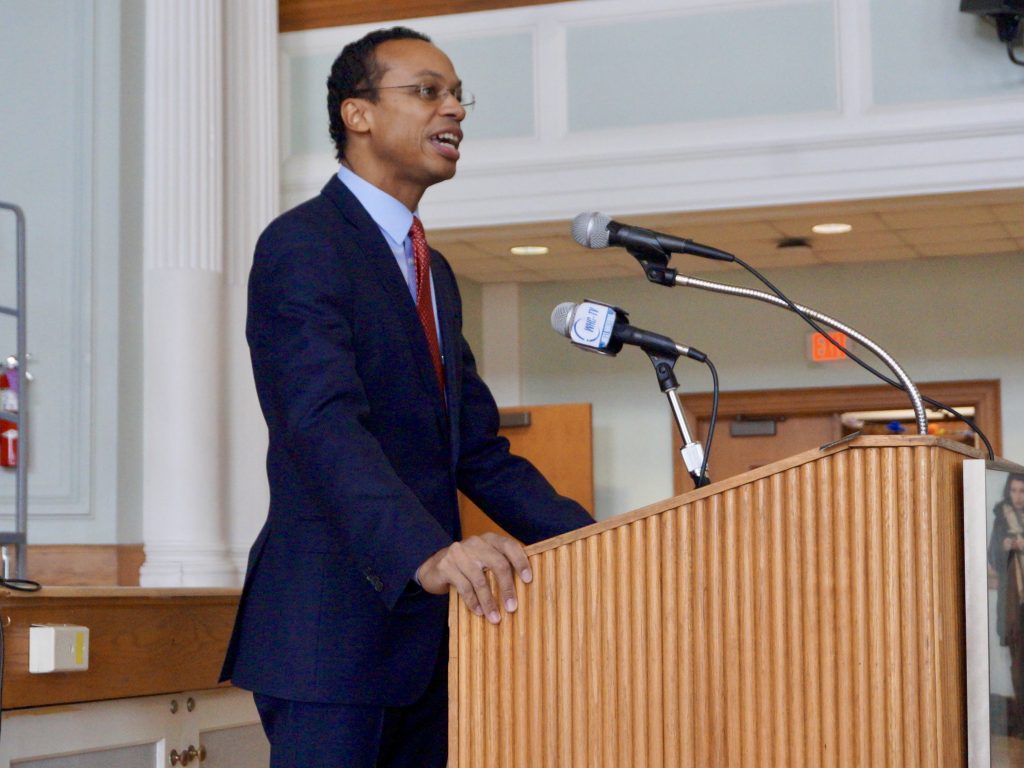 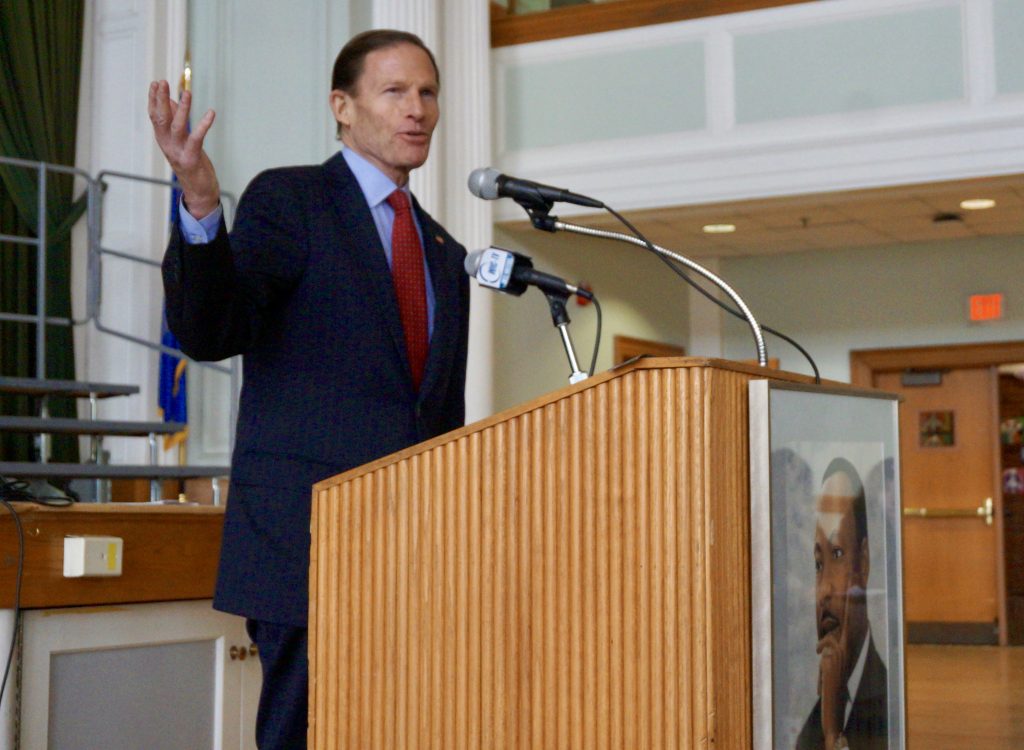 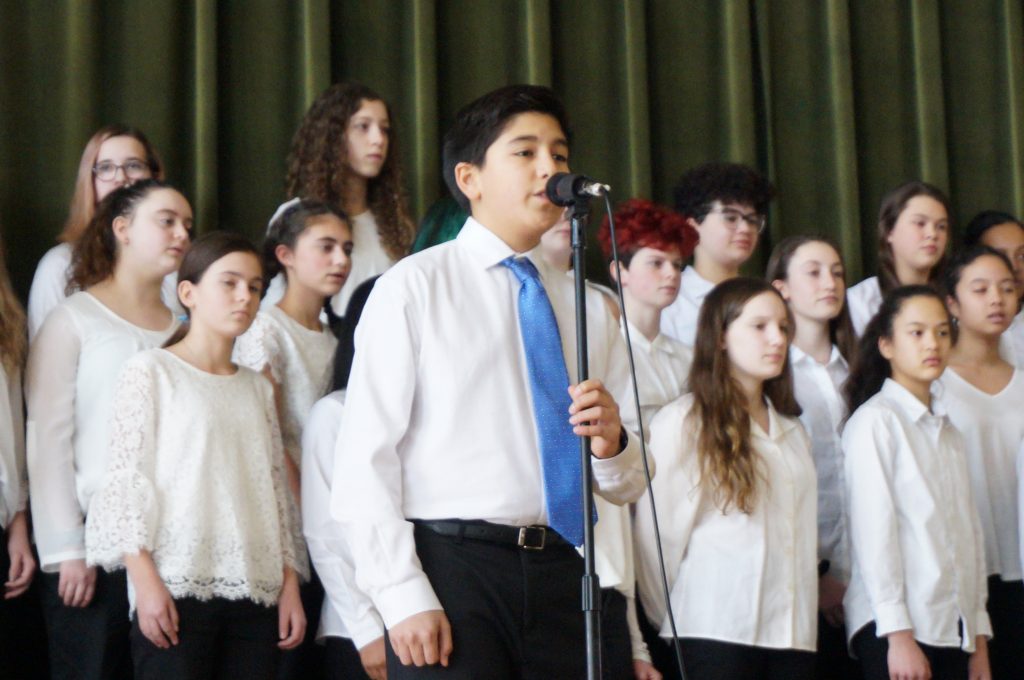 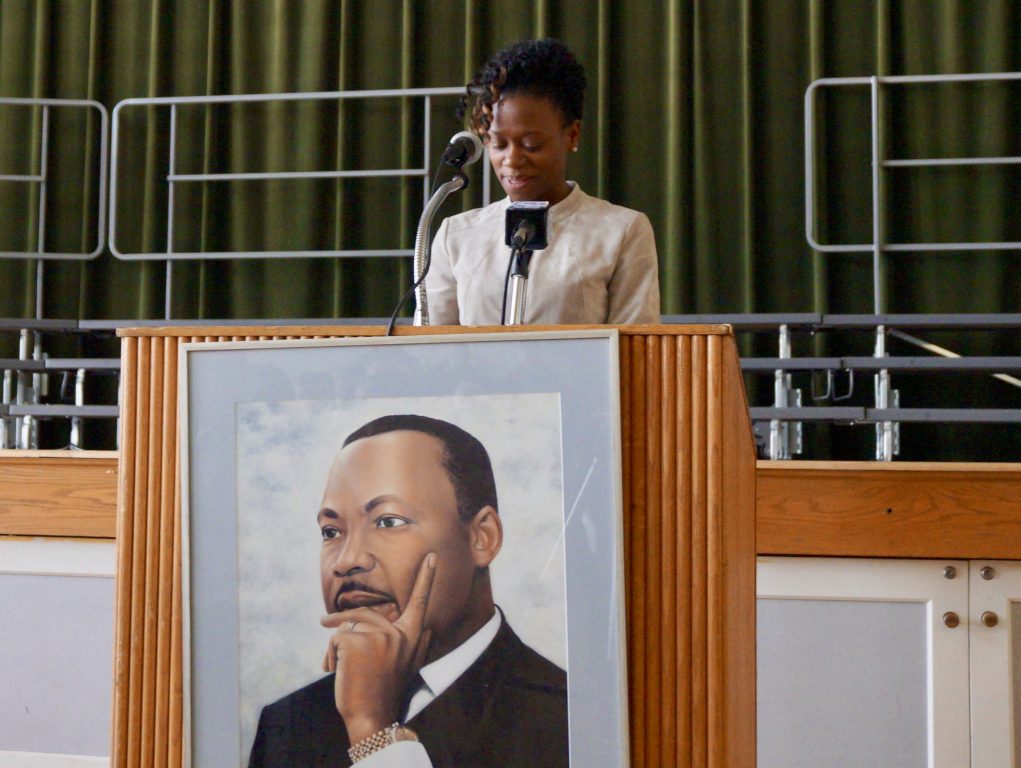 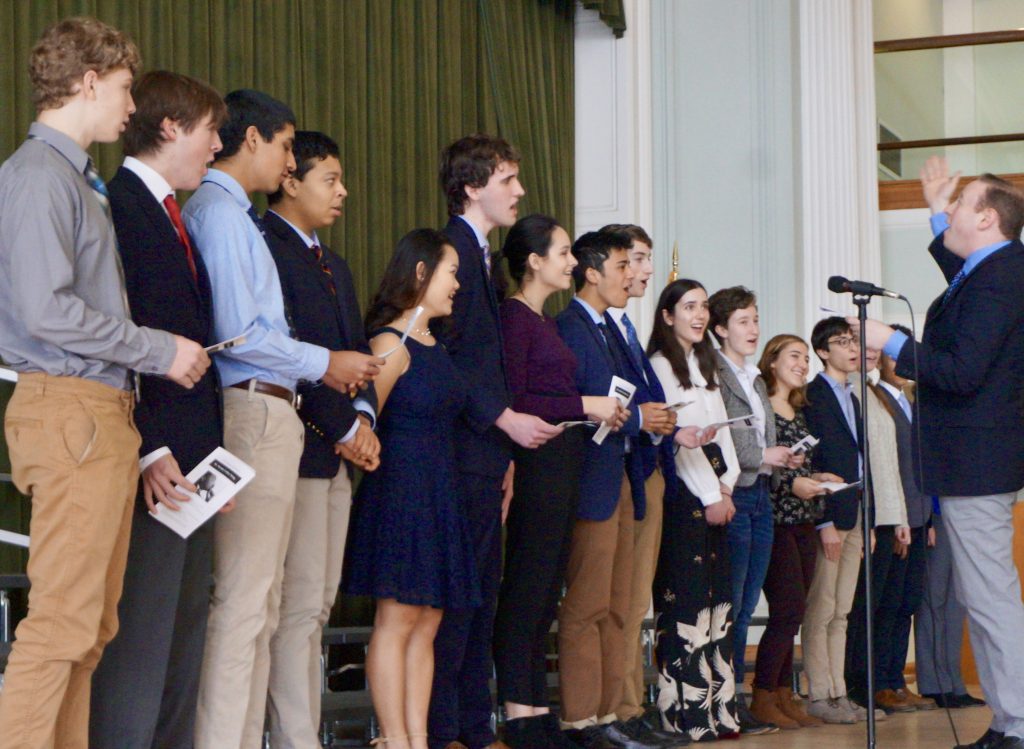 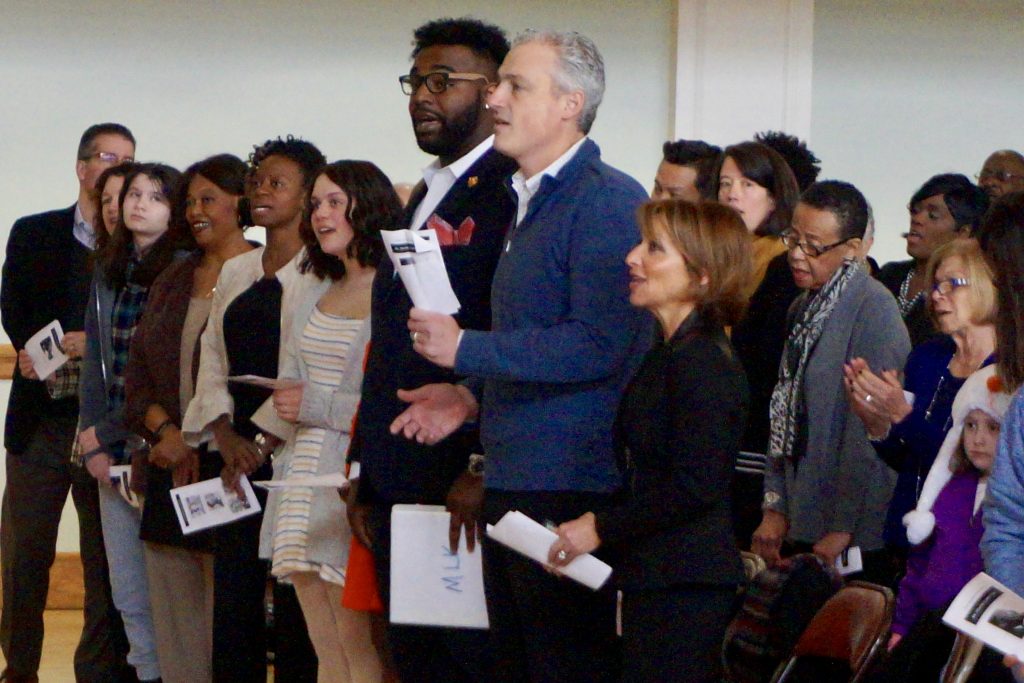 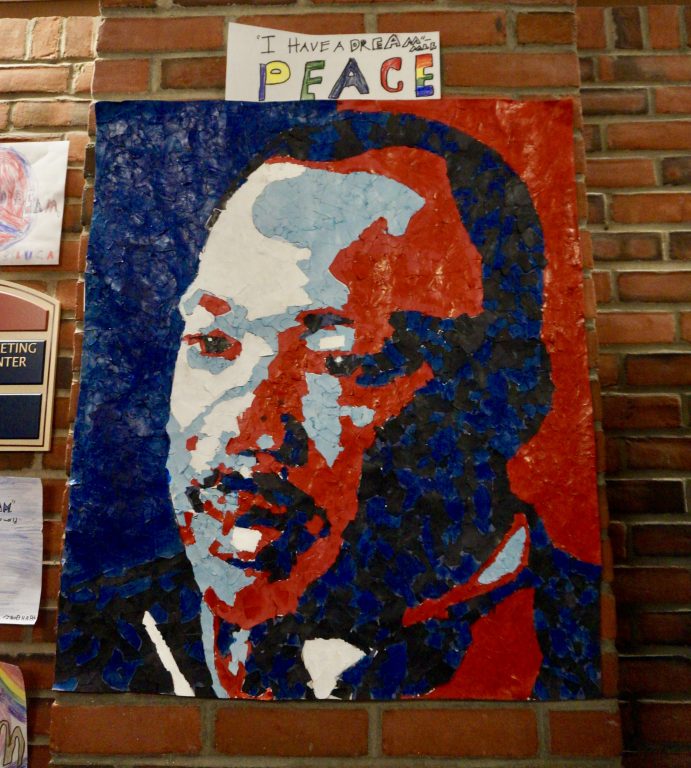 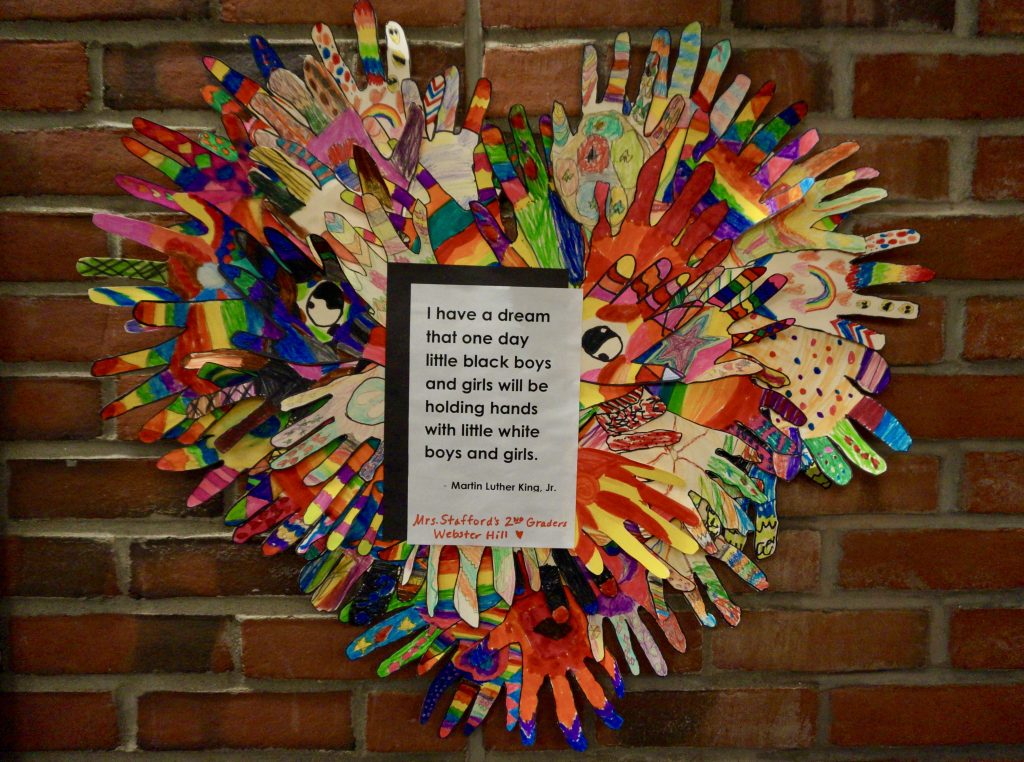 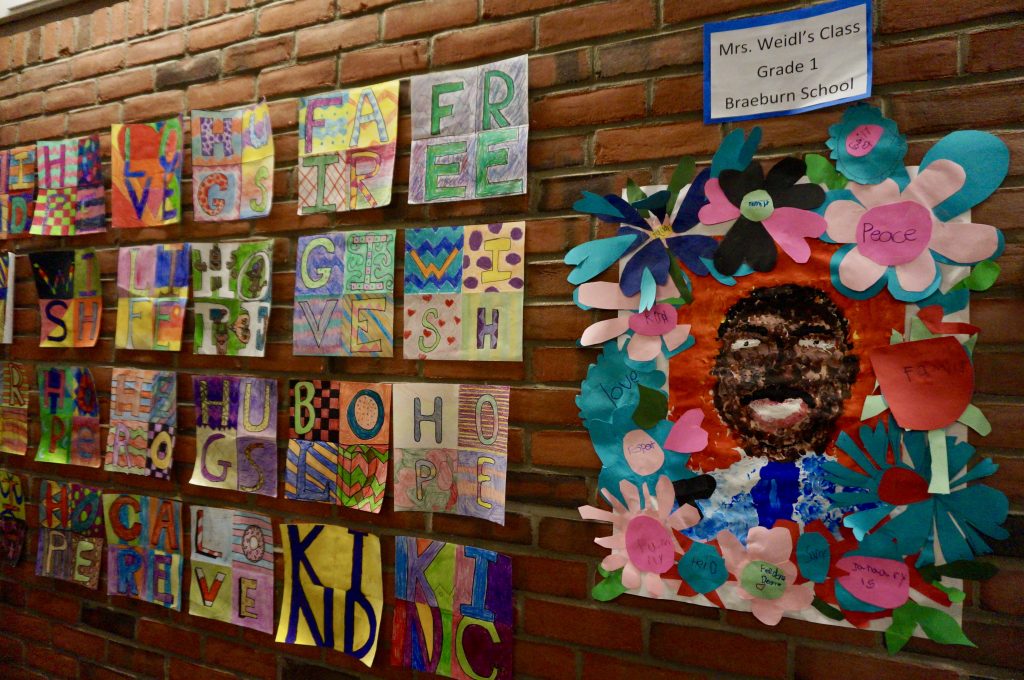 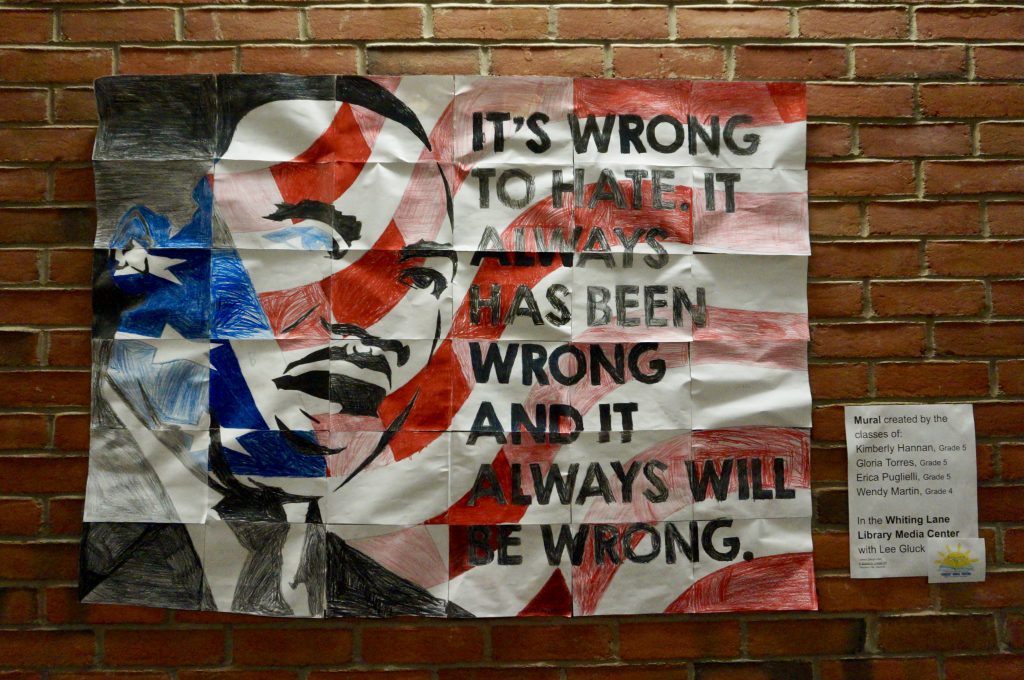