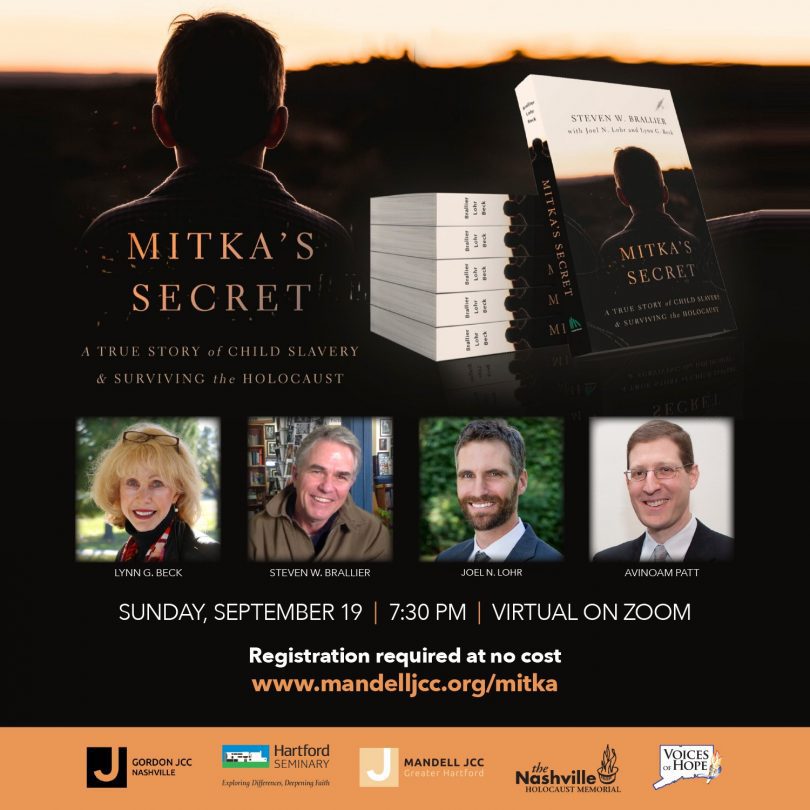 A hybrid author event will be held in West Hartford and Nashville, TN, to discuss the stunning real life story of Mitka Kalinski, who was enslaved as a child during WWII.

The Mandell JCC, the Gordon Jewish Community Center of Nashville, TN, the Nashville Holocaust Memorial and Voices of Hope are excited to come together for a special hybrid author event on Sunday, Sept. 19, 2021, at 7:30 p.m., sharing the remarkable life story of Mitka Kalinski who survived seven years of enslavement – while still a child – to a Nazi officer during and after World War II.

Award-winning author Joel Lohr, president and professor of Bible and Interreligious Dialogue at Hartford Seminary, will be in West Hartford and authors Steven Brallier and Lynn Beck will be in Nashville.

Mitka’s Secret tells the story of Mitka Kalinski, who escaped from an execution site during the Holocaust as a young boy. He was later found by Nazi soldiers, and served as a subject for medical experimentation. Having been orphaned before the war, Mitka did not know his origins or even his name. Torture, slavery, and a false name stripped him of his identity entirely. Mitka was eventually freed, and able to establish his life in the United States.

The story of Mitka, which is less a story of survival and more one of redemption and transformation – from hidden suffering to abundant joy, left author Joel Lohr in awe of Mitka’s emotional strength. “What a story. What a man. What a long, harrowing, and unique journey. I had never heard anything like it before. An orphaned, Jewish child made to be a slave to a Nazi officer. A man who tried to bury his past, only to have it all come out 30 years later, his wife of 28 years in shock. And, a man who came to embrace his Jewish heritage as well as learn how to love deeply, and forgive.”

“We are honored to be partnering with the Hartford Seminary, the Nashville JCC, the Nashville Holocaust Memorial and Voices of Hope to share this incredible story of survival,” says David Jacobs, Executive Director of the Mandell JCC. “Joel, Steve, and Lynn have written a power chronicle of the horrors and the victories of Mitka’s life. It is truly a testament to the resiliency of the human spirit.”

There will be a book signing following the event. Tickets (in person or virtual) are $25 with a book, and $10 without. For more information and to purchase tickets: www.mandelljcc.org/tix.

For an advance copy of the book, please contact Kathy Fishman at [email protected].