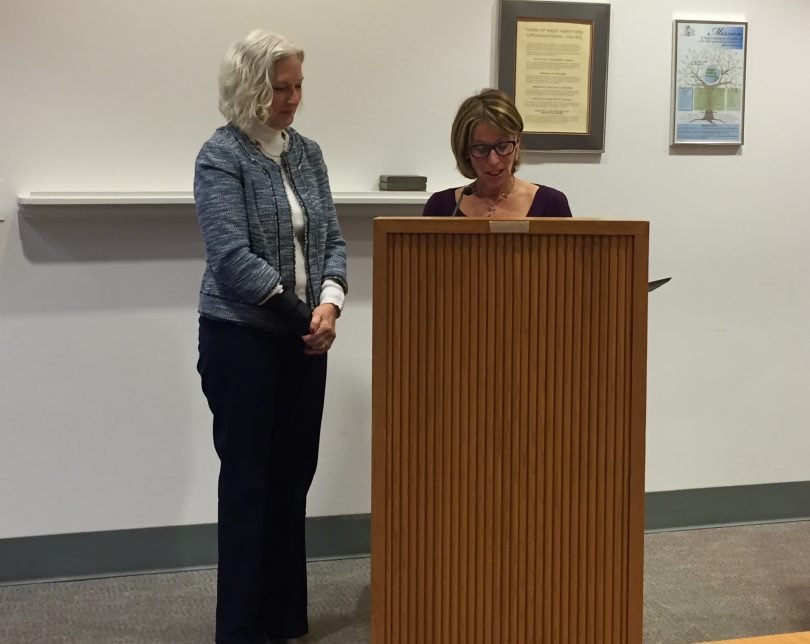 Barbara Lerner (left) listens as Mayor Shari Cantor reads a proclamation thanking her for her service as the executive director of the West Hartford Chamber of Commerce. Photo credit: Ronni Newton

At its last meeting of 2018, the West Hartford Town Council issued a proclamation honoring Barbara Lerner who has now retired as executive director of the Chamber of Commerce and plans to start her own consulting business.

Barbara Lerner, who retired at the end of December after nearly five years as executive director of the West Hartford Chamber of Commerce, was honored at the Town Council’s Dec. 11, 2018, meeting with a proclamation and some parting gifts presented by Mayor Shari Cantor. 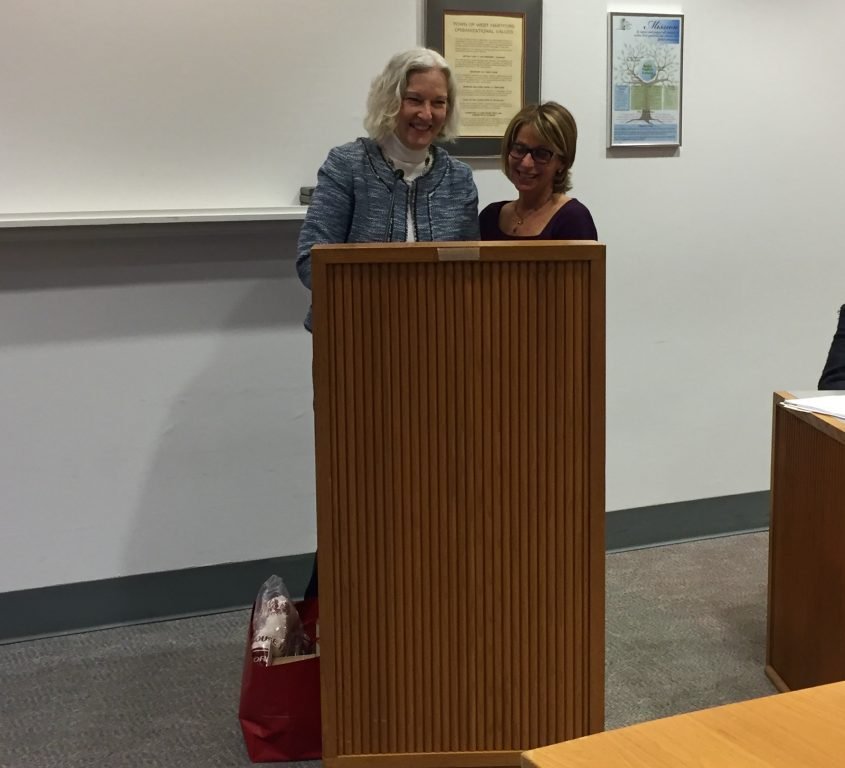 Barbara Lerner (left) with Mayor Shari Cantor at the Dec. 11, 2018, Town Council meeting where she was honored for her service as the executive director of the West Hartford Chamber of Commerce. Photo credit: Ronni Newton

Cantor said that not only was Lerner extremely effective in her role with the Chamber, which currently has 530 members, but she is also “a dear friend and has been an incredible partner in our community.”

Issued on behalf of the Town Council and residents, Cantor read aloud the proclamation to “recognize and celebrate Barbara Lerner on her well-deserved retirement and extend sincere gratitude to her on her commitment to the Town of West Hartford.”

Among the gifts presented were a Town of West Hartford/Noah Webster House blanket and “Life in West Hartford,” the book just published by Town Historian Tracey Wilson.

Lerner said she’s known most of the Council for a long time, is a long time resident of the town, and is also a former business owner and previously worked with one of the town’s largest taxpayers when she was general manager of Blue Back Square. “Many of my successes are because of my relationship with the town, and so my successes become the successes of West Hartford,” she said.

“I’m very grateful. This was unexpected,” said Lerner. “I really appreciate the thoughtfulness and that all of the things I have done have been appreciated and have hopefully made a small impact on the Town of West Hartford.”

Lerner said that she is not leaving town, and has no plans “to sit on the sidelines.”

“I’m leaving the Chamber in incredibly good hands,” said Lerner, referring to Chris Conway, who was named Lerner’s successor as executive director in November and started work with the Chamber at the beginning of December. Over the past several weeks, Conway had the opportunity to work hand-in-hand with Lerner.

Lerner already has a plan for her next venture. She told We-Ha.com that she has formed a new business, EventMark, and through that business will work as a consultant for special events and marketing, particularly with the nonprofit sector.

Lerner can be reached at [email protected].