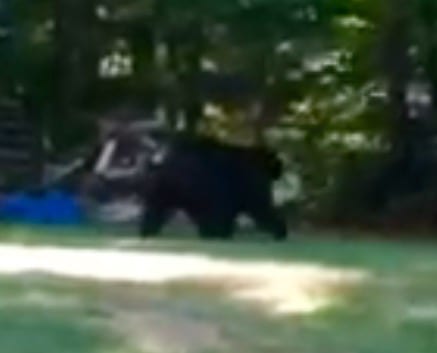 Screenshot from video of bear in Jeff Grody's yard at 110 High Wood Rd.

The West Hartford resident who found a bear inside his home last month believes the same bear has returned for another visit.

Jeff Grody, the High Wood Road homeowner who found a bear in his den on July 22, believes that the same bear is back with a renewed interest in both the outside – and inside – of his home.

On Friday, Aug. 5, Grody spotted what appeared to be the same large, untagged bear in his backyard at 110 High Wood Rd. at approximately 4:15 p.m.. This time he was able to capture some video through the window.

“The bear didn’t do anything other than attack the hummingbird feeder and walk away. It didn’t come toward the house. No tags. This is a big bear,” Grody said in an email Friday.

Or so he thought …

On Saturday, Grody and his wife made another discovery.

“Believe it or not, the bear tried to push his way through the screen again when he/she was here yesterday,” Grody said in an email on Saturday morning.

He said that his wife noticed that morning that the newly-repaired screen door was damaged at the bottom. “It’s clear that the bear pushed at the screen, encountered the glass slider and then backed away. This must have occurred shortly before I spotted the bear in the backyard,” Grody said.

The screen had been repaired after the bear’s July 22 visit, and Grody said that it had been in perfect condition before the latest encounter.

This particular bear may not have ventured far after its first visit to Grody. A resident of Mountain Road, near the intersection of High Wood Road, found a large, untagged bear swimming in her pool on July 27. Mary Petras believes it may be the same bear that has been visiting Grody’s house.

Grody has reported the latest incident to the Department of Energy and Environmental Protection, and he’s not sure what will happen next. After the bear entered his house in July, DEEP had set a trap but it was removed after a week when the bear wasn’t caught.

“I’m happy to let them keep the trap in my yard until they catch the bear. This one is clearly in the process of becoming a problem if it’s not a problem already,” Grody said.