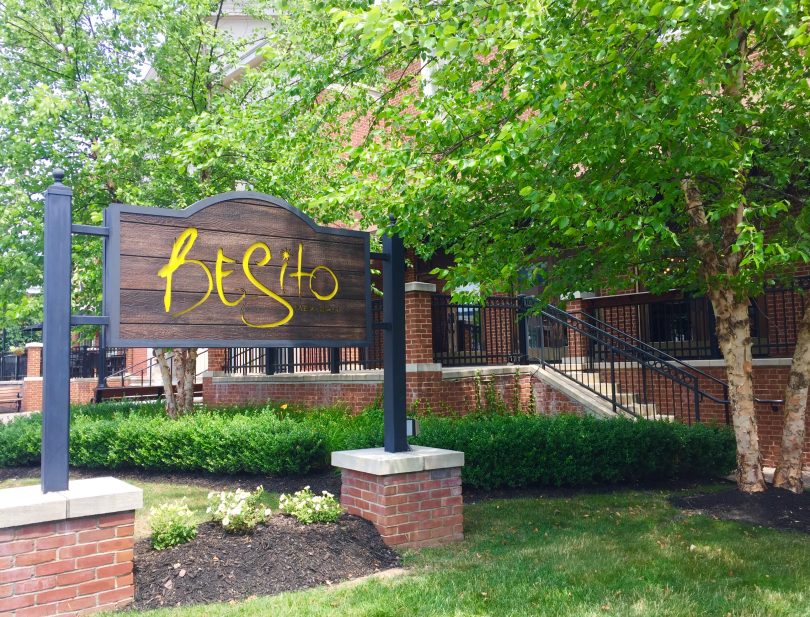 [Updated, 4:10 p.m.] One of the owners of Besito confirmed that the restaurant was closed as of Monday, July 10, 2017, and the landlord said it can’t comment due to ‘ongoing litigation.’

At lunchtime on a beautiful July day, when Besito’s patio would have ordinarily been full of diners enjoying tableside guacamole and other Mexican dishes, potential patrons instead found the door locked and a sign posted indicating that the restaurant had closed its doors.

Inside, the tables were empty, devoid of tablecloths, and some staff members were clearing out food and other perishable items from the refrigerator and pantry. 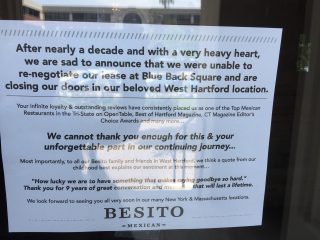 “We were unable to renegotiate with our landlord,” co-owner John Rieger said Monday. “We really determined on Friday that the negotiation would not be fruitful.”

When it became apparent on Friday that the negotiations were not going anywhere, the two spent the entire weekend discussing how to proceed. They determined it would be best not to keep the employees in limbo, and decided not to open on Monday morning. Some employees learned of the closing when they arrived for their lunchtime shifts.

Rieger said that Besito employs 40-45 people, and they have offered them employment at other restaurants, but none of their other locations are in Connecticut. There are two in Massachusetts, soon will be three in Long Island, and there are also locations in Pennsylvania and Tampa, FL.

Chefs and some senior management may be relocated, he said, and all employees will be taken care of to the best extent they can.

Even the posted sign made it evident that Besito loved the West Hartford community.

“It’s been a great relationship, and we hope to be back sometime in the future,” Rieger said. It really breaks our hearts. There were a lot of tears.”

Blue Back Square management issued the following statement Monday afternoon: “We are sorry to see that Besito is closing but unfortunately, we cannot discuss any details because it is subject to ongoing litigation.”

The message on the Besito West Hartford website reads:

“West Hartford, Connecticut, Thank you for nearly a decade of amazing memories … After nearly a decade and with a heavy heart, we are sad to announce that we were unable to re-negotiate our lease at Blue Back Square and are closing our doors in our beloved West Hartford location.

“Your infinite loyalty & outstanding reviews have consistently placed us as one of the Top Mexican Restaurants in the Tri-State on OpenTable, Best of Hartford Magazine, CT Magazine Editor’s Choice Awards and many, many more…

“Most importantly, to all our Besito family and friends in West Hartford, we think a quote from our childhood best explains our sentiment at this moment…

“How lucky we are to have something that makes saying goodbye so hard.”

“Thank you for 9 years of great conversation and memories that will last a lifetime.

“We look forward to seeing you all very soon in our many New York & Massachusetts locations.”