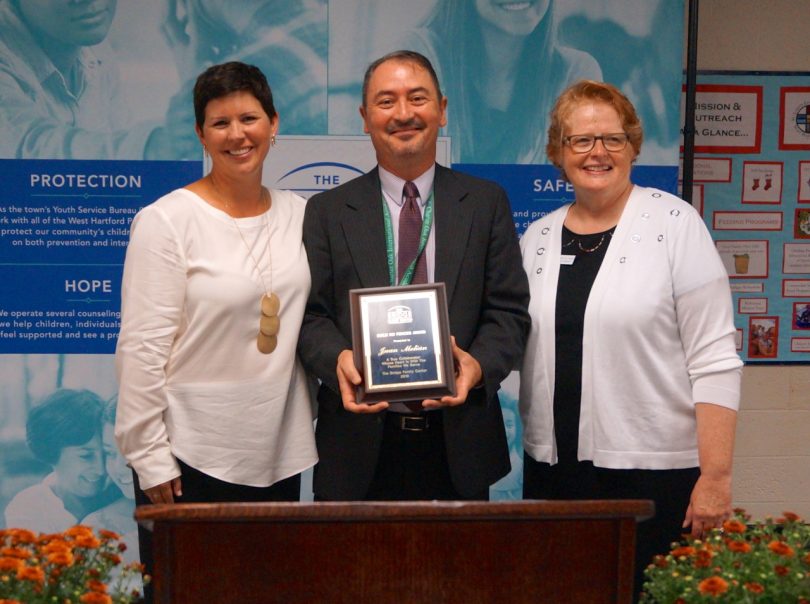 Charter Oak International Academy Principal Juan Melián was honored with the ‘Build No Fences’ Award at the 32nd Annual ‘Breakfast on the Bridge’ Wednesday morning in West Hartford. 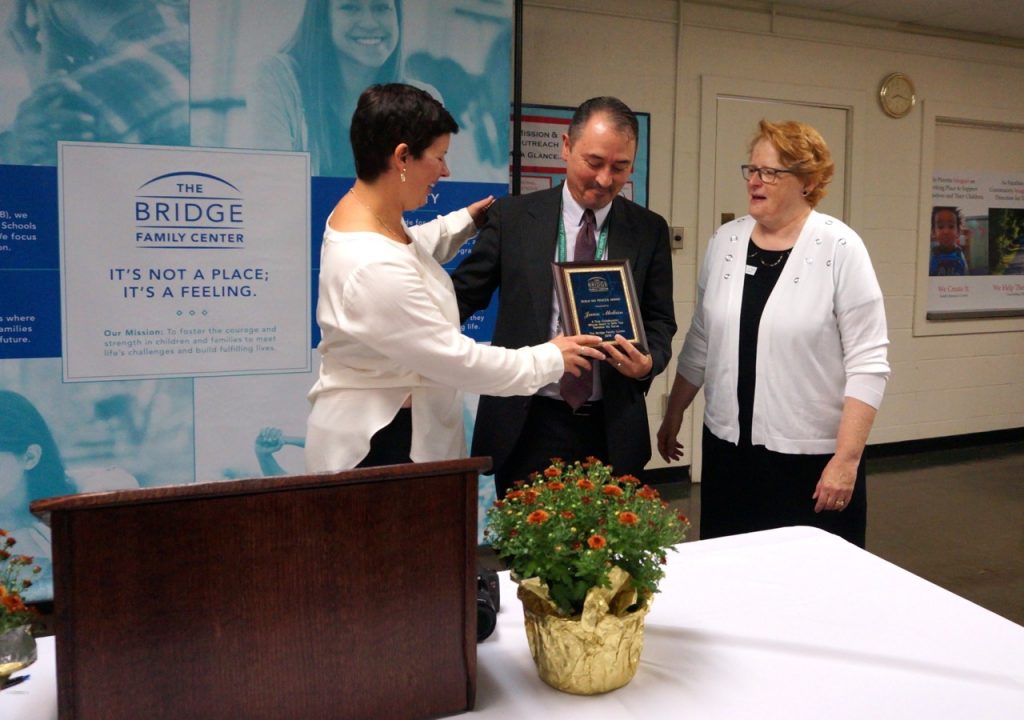 A man who emanates warmth, builds trusting and meaningful relationships, and sets an example for inclusiveness and collaboration was honored Wednesday morning with the “Build No Fences” Award at the 32nd annual Breakfast on the Bridge.

Juan Melián, the principal of Charter Oak International Academy said he was “overwhelmed and shocked” to receive the coveted award. “What a great honor.” 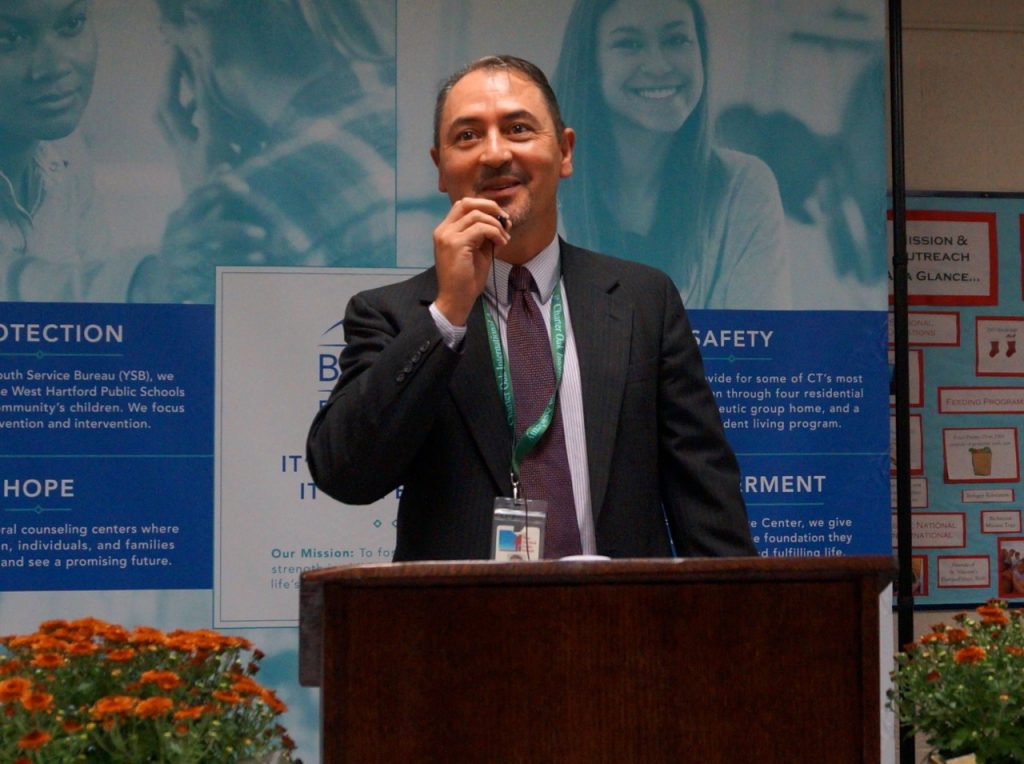 Juan Melián expresses his appreciation for being honored with the Build No Fences Award. Breakfast on the Bridge. Sept. 12, 2018. Photo credit: Ronni Newton

Noting that his friend and Superintendent of Schools Tom Moore had received the Build No Fences Award last year, Melián said, “There area a couple of honors in education: When you are selected by the kids to be the keynote speaker at graduation, that’s one that both Tom and I share … but let me tell you that this is the other one that I really feel honored to have.”

On behalf of Charter Oak International Academy and the Family Resource Center that is housed at the school, Melián said, “Let me say thank you to West Hartford Public Schools. This is the place that has allowed me to grow. … Working with our families has been such a privilege, such an honor.” Earning the award will make them “work even harder for our families,” Melián said.

A capacity crowd of administrators and principals from throughout West Hartford Public Schools, private school administrators, social service professionals, Mayor Shari Cantor, West Hartford Police Chief Vernon Riddick and Assistant Chiefs Dan Coppinger and Robert McCue, Bridge staff, and others gathered Tuesday morning at St. James’s Episcopal Church in West Hartford for The Bridge Family Center’s 32nd annual Breakfast on the Bridge – an event that celebrates commitment to children and families and has come to be considered the informal kick-off for the new academic year.

“I’m always amazed at the energy, the turnout in the room,” Bridge Board of Directors President Susan Hamilton told the crowd. While she said it could be because it’s the start of a new school year and a chance to reconnect, she believes that there would be the same commitment and enthusiasm among this group of people even on a cold day in November.

Hamilton, who has worked on behalf of children for 25 years, said, “I know when I hear that either a child or family is receiving services from the Bridge or is in a Bridge program or in West Hartford Public Schools … I always feel like they’re in good hands. … The reputation you have as a community and as a service provider is really unparalleled.”

“The Bridge Breakfast is focused on collaboration and the importance of working together to accomplish great things,” said Executive Director Margaret Hann, noting that this is the 31st annual breakfast she has attended, and she always feels so blessed welcoming everyone.

The Bridge, which will celebrate its 50th anniversary in 2019, started as a coffeehouse in the basement of First Church “as a response to finding constructive alternatives for kids who were hanging out in West Hartford Center smoking things that they probably should not have been smoking.”

The first shelter for boys and girls opened in 1978 at 1019 Farmington Ave. The road to open the shelter “was no easy task,” Hann said, but a group, that included parishioners from St. James’s Church, were bold and fearless and did not give up. Over the years the services have expanded greatly, and last year the Bridge served more than 9,000 children, youth, and families.

“Our past, present, and future was and will be forged on courage, cooperation, and fearlessness,” said Hann. The young people who are served depend on it.

After everyone in the room stood to introduce themselves, Bridge Director of Marketing & Communications Amanda Aronson had the privilege of announcing the Build No Fences Award – an honor presented annually to an individual with a collaborative spirit goes above and beyond in serving the children and families of West Hartford. The presentation is the highlight of the breakfast, and the name of the winner is a surprise to the winner and kept a closely-guarded secret from all but a handful of those in the room.

“Warmth. That is the word that best encompasses the essence of our award winner,” Aronson said. “This person emanates warmth, almost to the point that he seems to move through life with rays of sunshine glowing around him everywhere he goes. His warmth draws people close and makes them feel safe and comfortable. Trusting and meaningful relationships soon follow. As we all know in this room, strong relationships are necessary for any collaboration to take place.”

The crowd erupted into applause as Melián’s name was announced.

As is the tradition, comments and tributes about the award recipient made during the nomination process were also shared with the audience.

In her comments, Deborah Zipkin, director of the Family Resource Center, relayed a story she had overheard two 4-year-old preschoolers having last year. “Noah said to Jackson ‘Who is that boy in the suit?’ Jackson kind of puffed himself up and said ‘That’s Mr. Melian. He’s the boss of the school,'” she wrote.

“It’s easy to understand Noah’s question. Mr. Melián plays soccer outside on the playground with fourth graders. He often eats lunch with the kindergarteners. He’s not scary. He high-fives first graders in the mornings as they arrive at school. Parents get hugs and greetings in English and Spanish. He visits our early learning playgroups and knows toddlers by name. He supports the students in our English for Families class from the Syrian refugee moms to the moms from Japan, Columbia and Greece. At our monthly Principal’s Coffee Mr. Melian has made it safe for parents to can ask about anything that’s on their minds. And they do. Strollers, trikes and wagons line the hallway outside the FRC. Juan knows what a welcoming school is and how to make it happen,” Zipkin wrote.

Roszena Haskins, director of Continuing Education and Diversity Enhancement, said that Melián is a great choice to carry forward the Build No Fences torch.

When she met Melián in 2007, Haskins said it was clear how much he loved teaching, and always worried about students who were on the margins. “I recall how passionate Juan was about every child having a touchstone in school for which he/she/they felt connected and valued. So, Juan did things that would bewilder some of his colleagues or cause them to check his pulse. He volunteered for cafeteria duty. He gave up his lunch period to allow his classroom to be transformed into a drop-in space for students and colleagues when it would have been his right to close his doors and consume his lunch,” she wrote.

“Sr. Melián’s public spirit is infectious. Given Juan’s humility, I am confident that he will accept this wonderful honor with great humility and continue to exemplify the traits of a true collaborator,” she added.

On behalf of the Charter Oak International Academy administration, Diana Coyne and Kirsten Sanderson wrote that Melián is “one of the most authentically kind and empathetic people we have ever met. He cares deeply about the students, staff, and families in our community, and works tirelessly to model the International Baccalaureate (and Charter Oak’s) mission: ‘to make the world a better and more peaceful place.'”

Conard Principal Julio Duarte said he could not think of someone more deserving of the award than Melián. “Above all other characteristics of a leader is one that is hard to measure: how much someone truly cares.  I can tell you that Sr. Melián has more passion for what he does than can be put into words. Without a doubt, his work has truly made a difference in the lives of his students and parents. He is a champion of students who need someone to help them find their voice and advocate for themselves, as well as one who advocates for them on a consistent basis. Over the years, he has been both a tremendous mentor and friend.”

Hann echoed those comments, noting that Melián “is the perfect combination of warmth, knowledge, and compassion. He inspires all those around him to do their best, treat each other with kindness, and to pay attention. … I am so pleased that Juan is this year’s recipient of the Build No Fences Award.  Congratulations, Juan – you inspire me!” 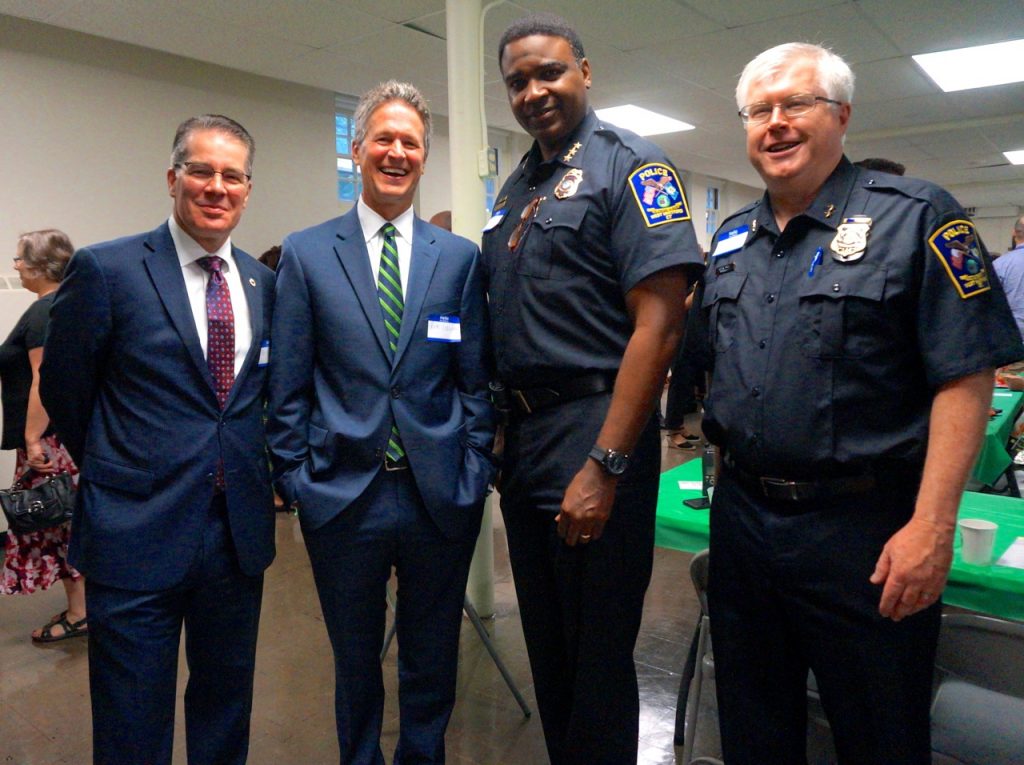 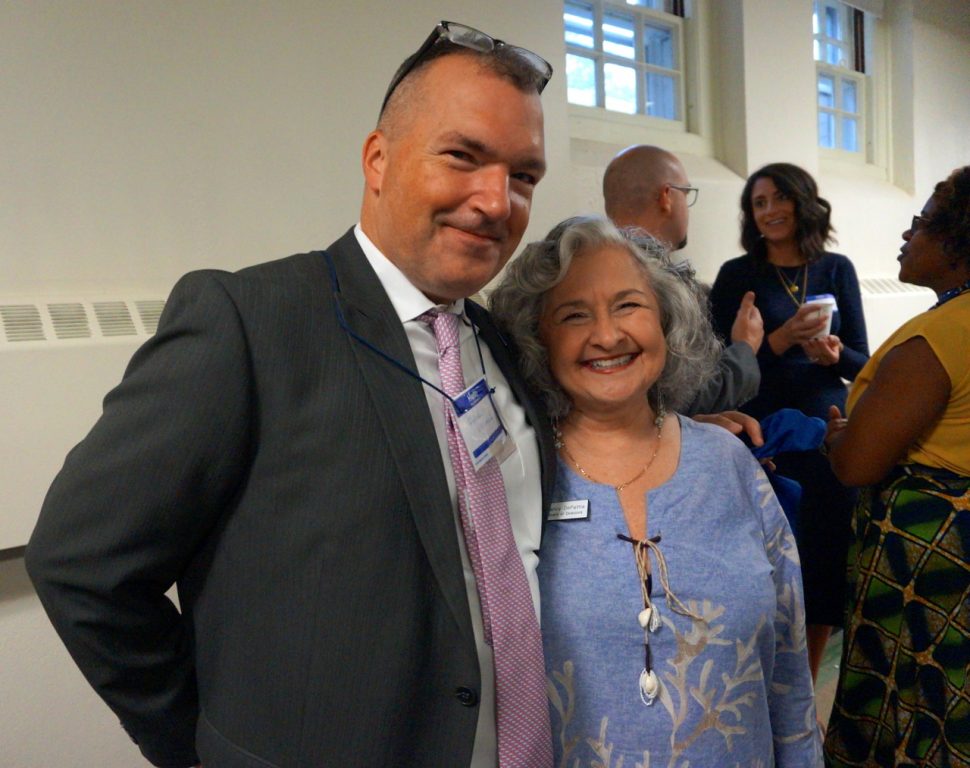 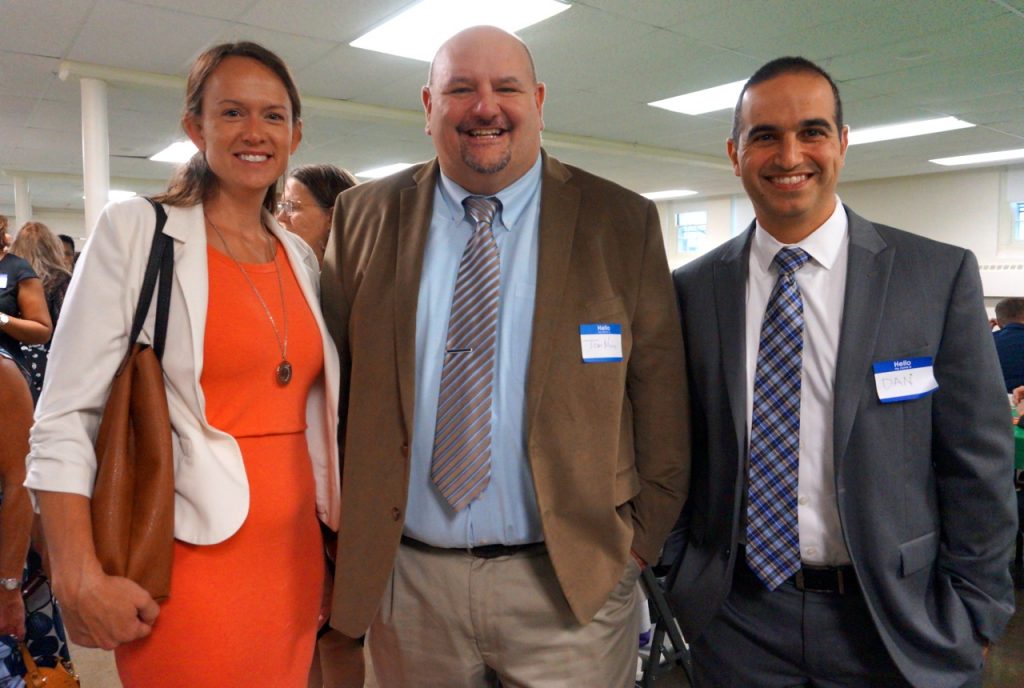 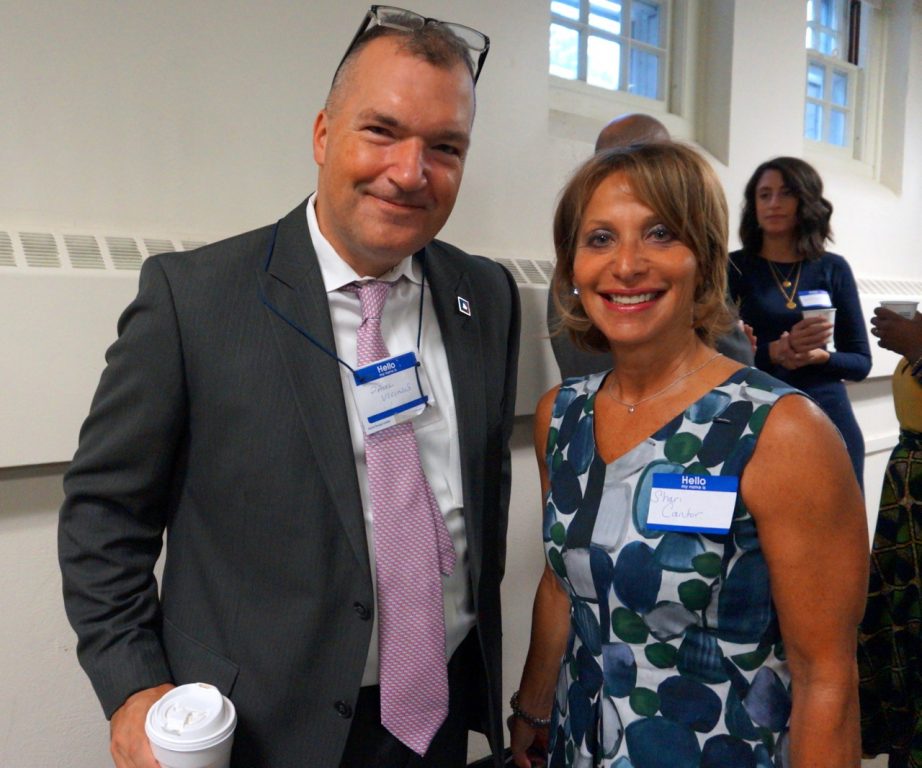 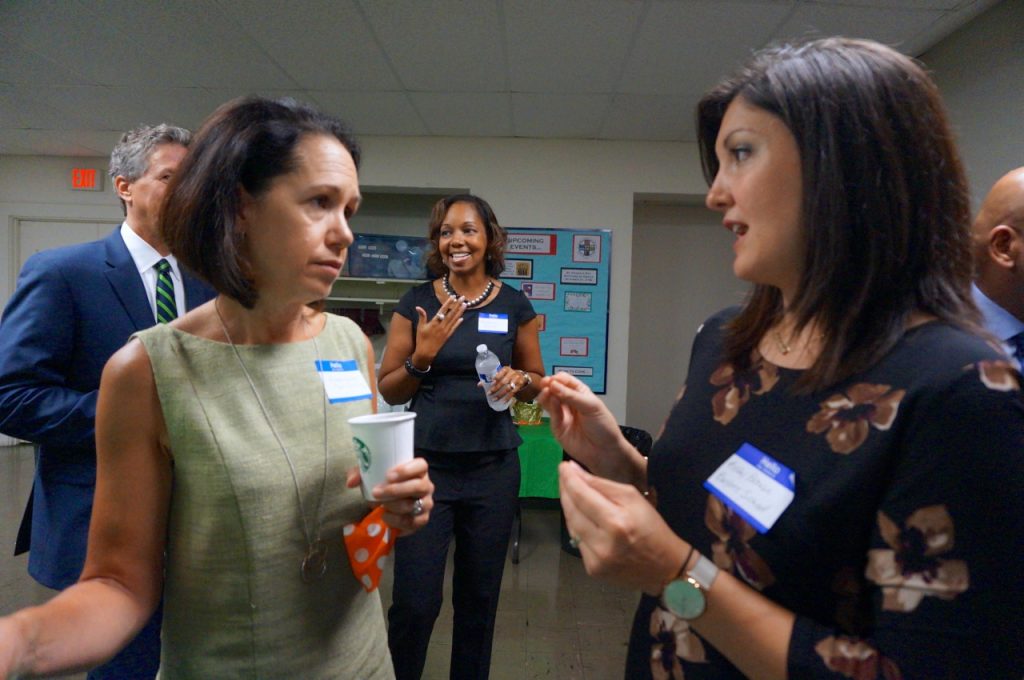 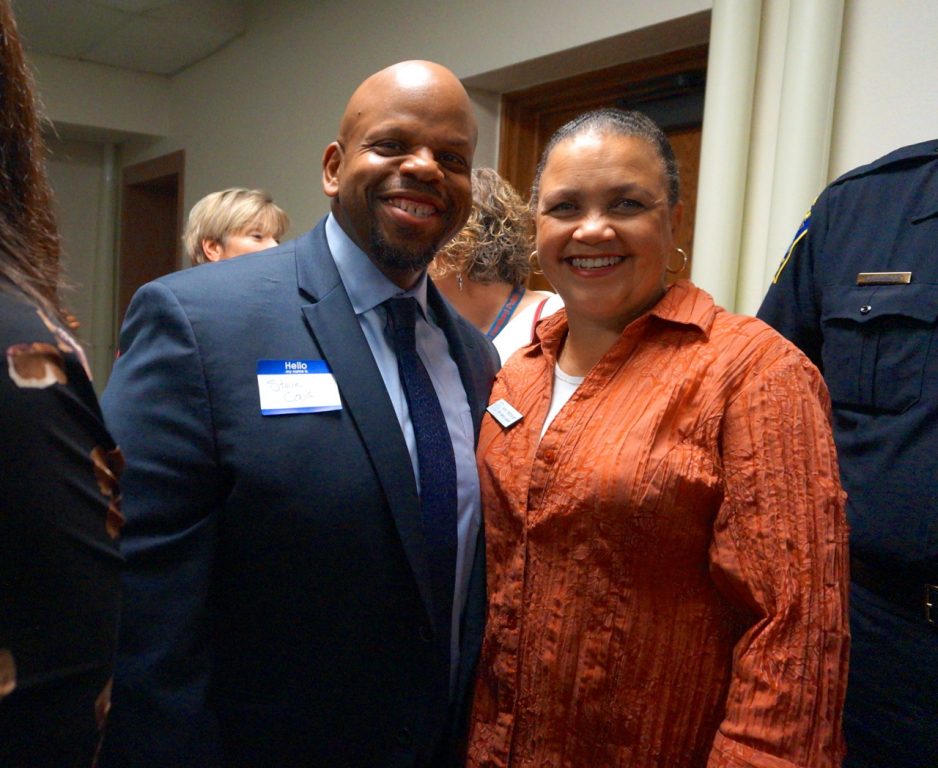 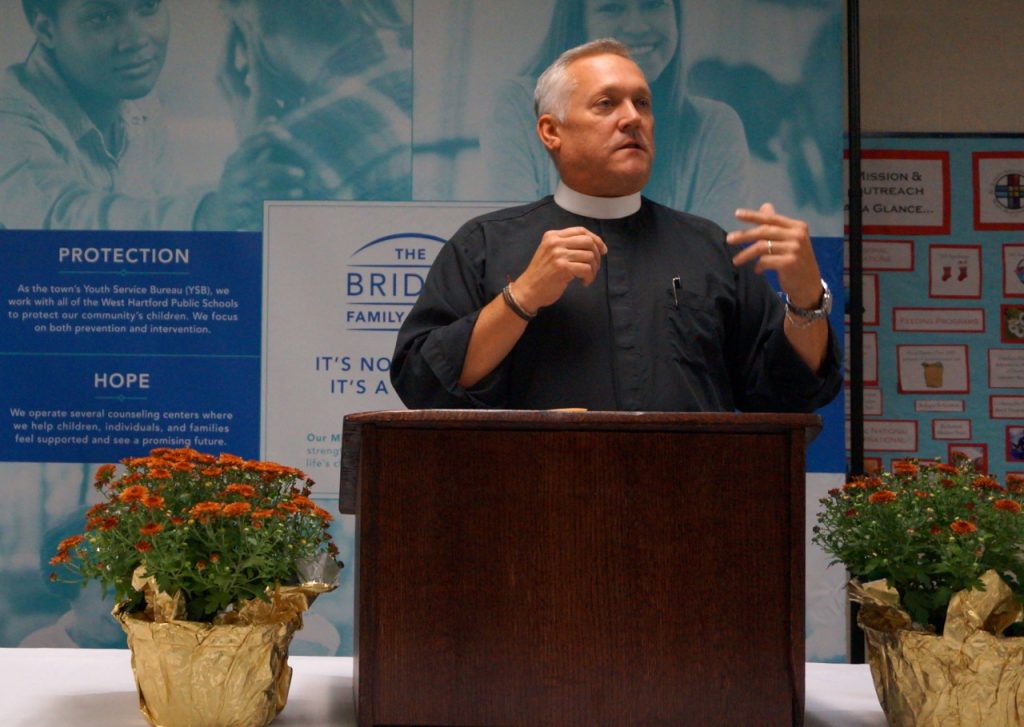 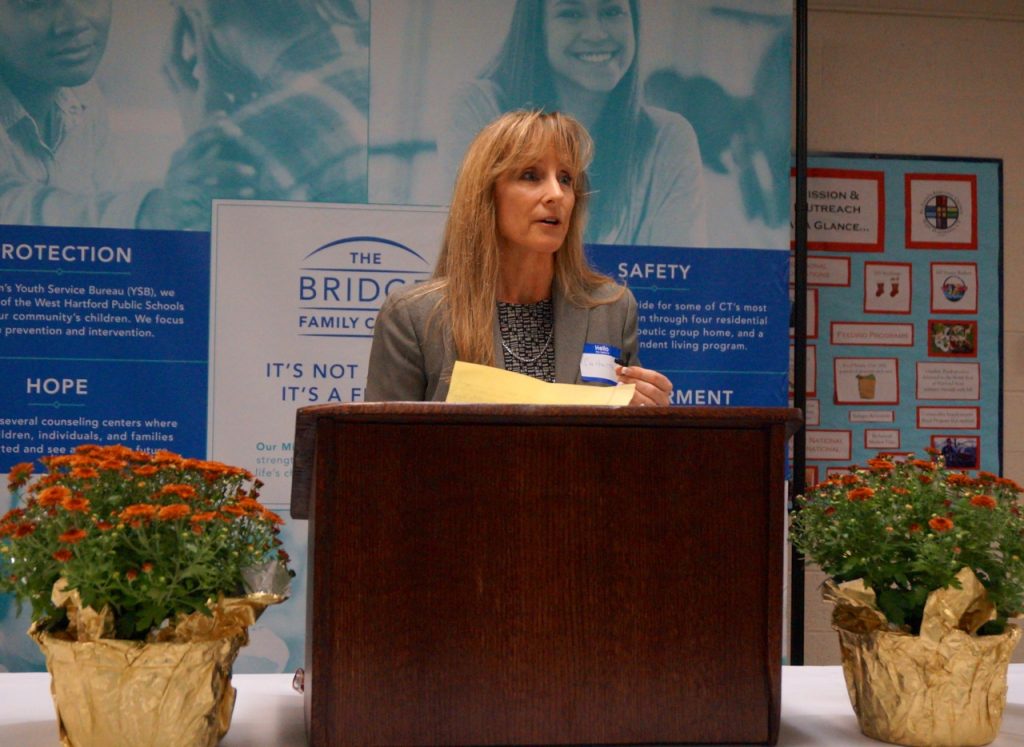 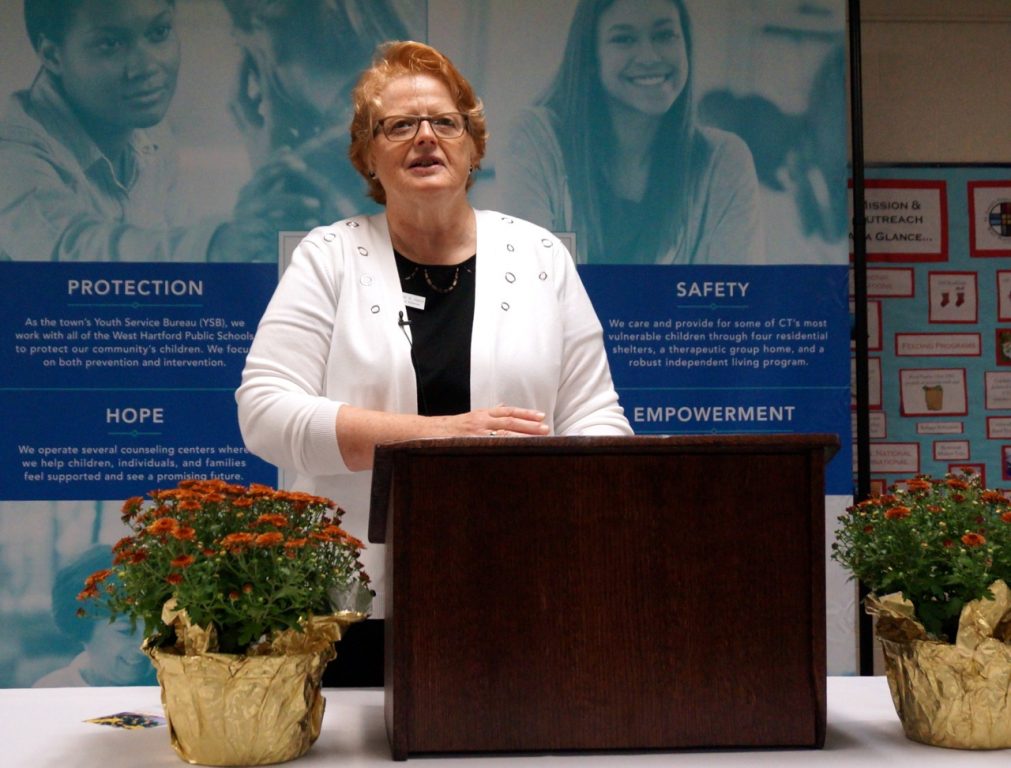 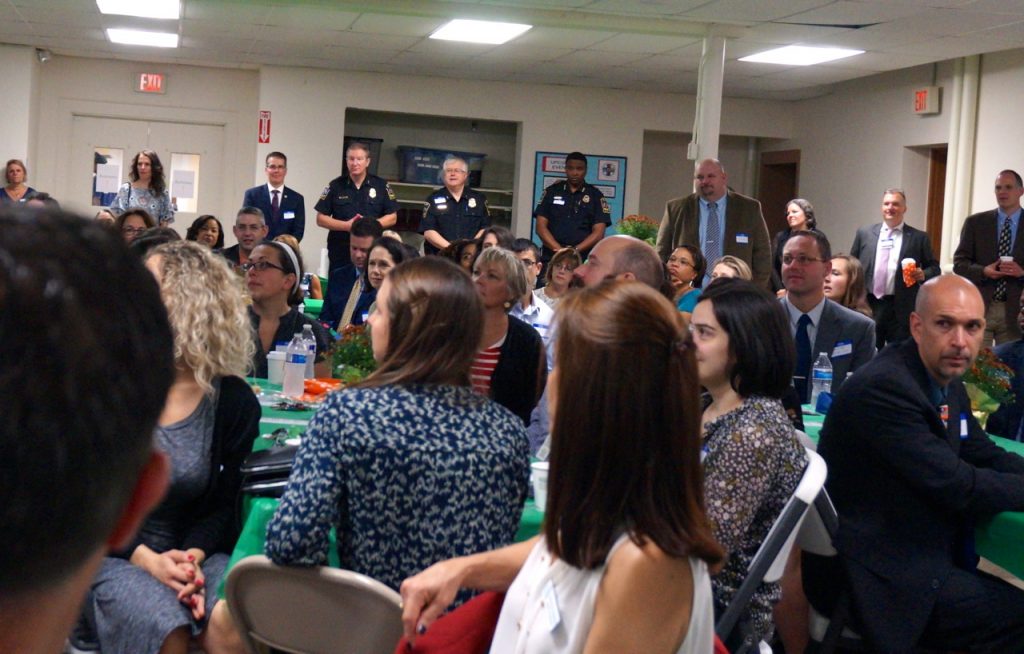 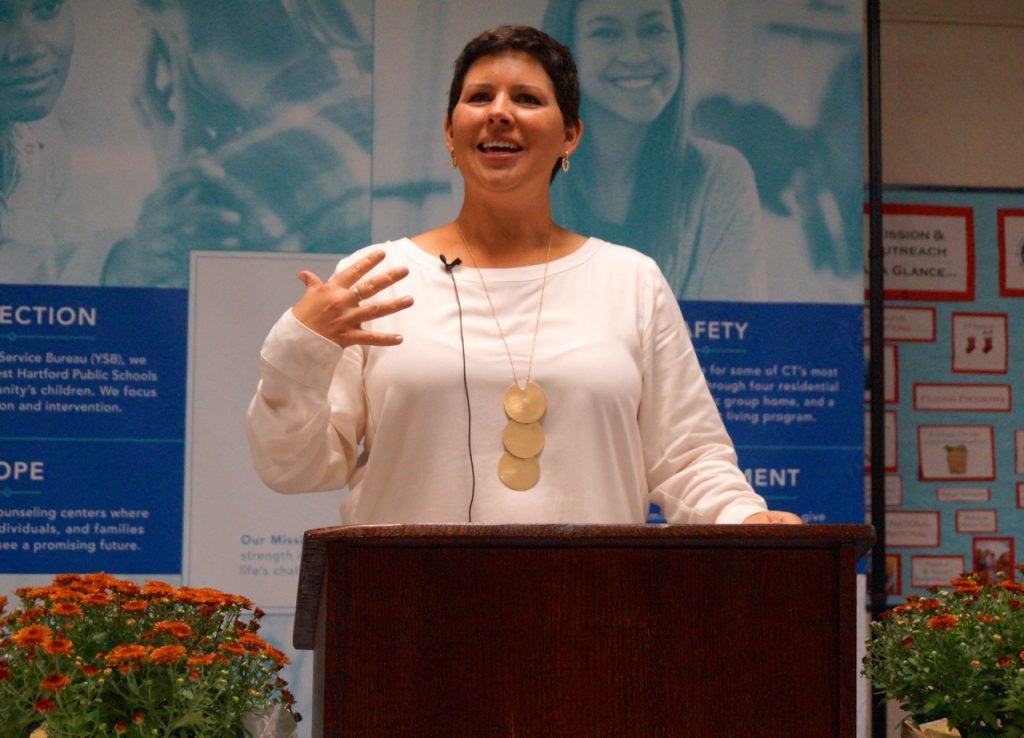 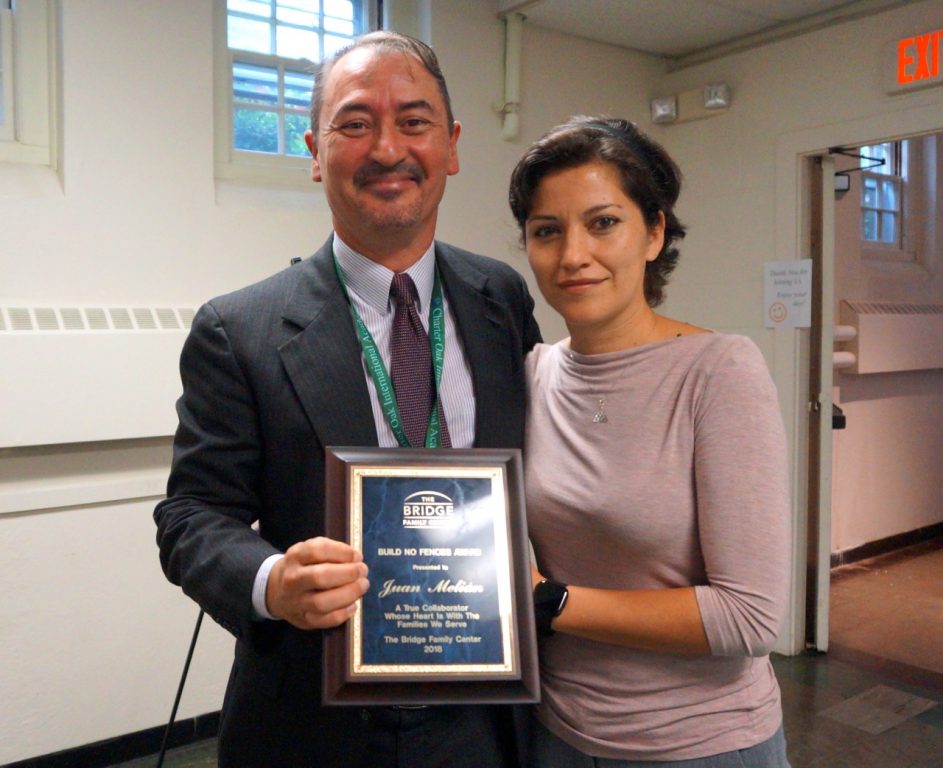