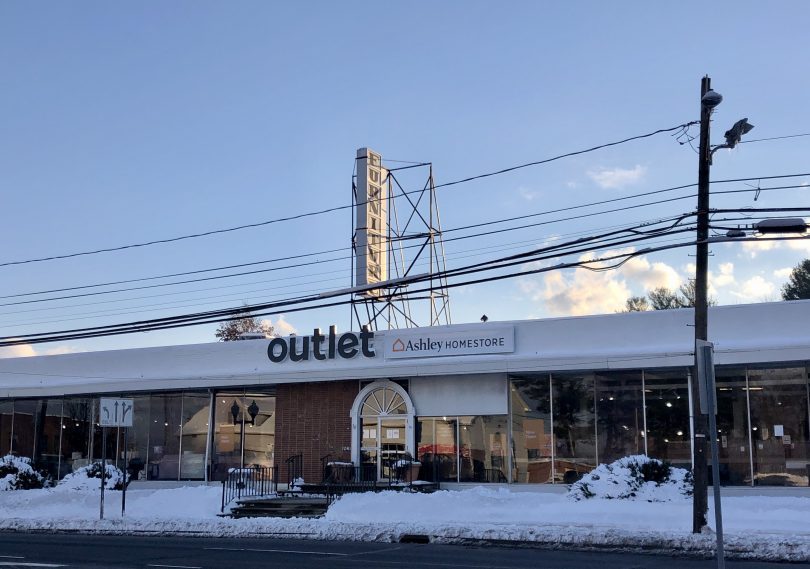 The state announced the awarding of grants under the Brownfield Remediation Program on Thursday, including more than $950,000 to clean up the site on New Britain Avenue currently occupied by Ashley Home Furniture Outlet. 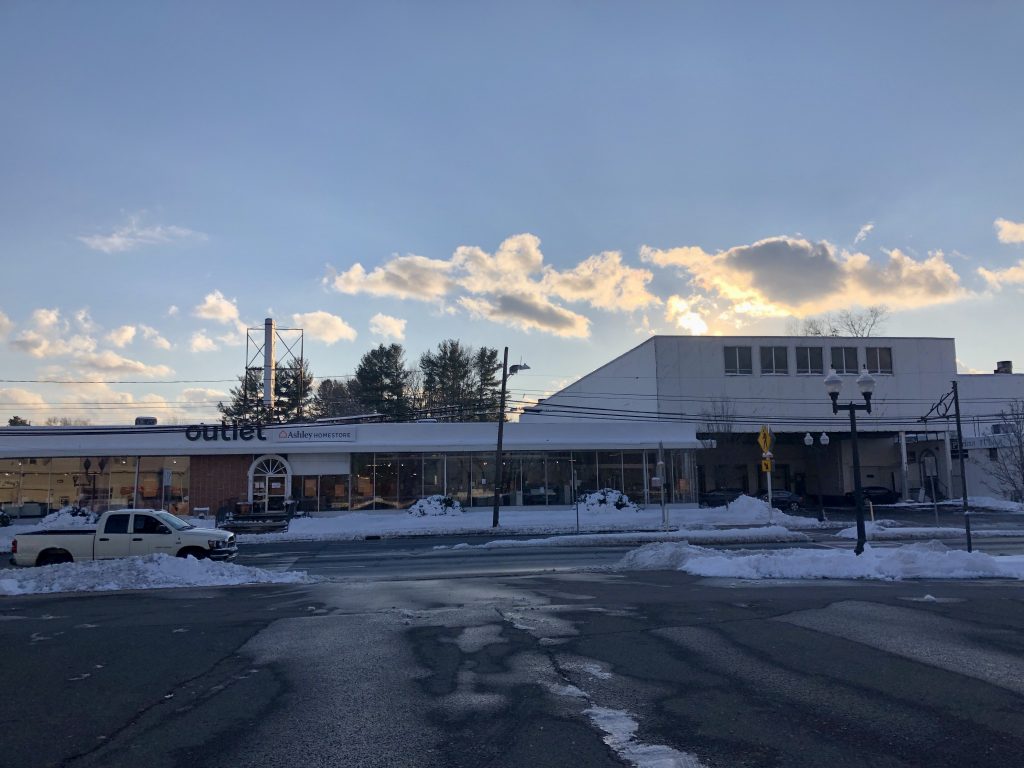 The existing buildings at 1501 and 1601 New Britain Avenue, which span a wide swath along the sidewalk, are slated for demolition with remediation funded through a brownfield grant awarded by the state. Photo credit: Ronni Newton

The Town of West Hartford applied for a $953,646 Municipal Brownfield Grant from the Connecticut Department of Economic and Community Development (DECD) Office of Brownfield Remediation and Development for the property at 1051-1061 New Britain Ave., currently occupied by Ashley HomeStore Outlet, and learned on Thursday that the funds have been awarded, paving the way for the redevelopment of a key piece of property.

Sami Abunasra, who purchased the parcels totaling 2.97 acres at 1051 and 1061 New Britain Ave. in 2020, plans to pursue construction of a $34 million mixed-use residential and commercial development where the Ashley HomeStore Outlet, that he also owns and operates, is currently located.

A few more pieces need to fall into place before the plans can be finalized, Abunasra told We-Ha.com on Friday, including the Town Council’s adoption of a new Transit-Oriented Development zone that will apply to the property, which is located roughly 400 feet from the Elmwood CTfastrak station. Following a public outreach process that has been underway since last spring, crafting of the TOD ordinance has been in progress and the Council expects to vote on it within the next few months.

“We’ve already had preliminary discussions with the town,” Abunasra said, but he said the exact design for the new development will need to conform to the ordinance.

Preliminary plans are for 131 apartment units, he said, a “good mix, maybe 50-50” of one- and two-bedroom units in what will be a four-story building. While the existing structures, built in the 1950s and 1960s, will be demolished, he intends to reopen Ashley HomeStore on the ground floor, with some other retailers included as well. A restaurant with a rooftop area is being considered, Abunasra said.

The project will definitely include affordable housing units. “We’re shooting for 15,” he said, but the final number will depend in part on the construction costs because the project needs to work from an economic standpoint.

Style-wise, “it’s going to be an urban-style development,” Abunasra said. “We will have amenities to attract young professionals,” he said, with design elements that one might find in Boston or New York buildings.

Although it will be a TOD project, Abunasra said there will be ample parking on site for the residential and commercial needs, so that the property will be self-sufficient.

Connecticut-based Phase Zero Design has been engaged as the architect for the project, he said.

Abunasra said he hopes to begin the demolition of the existing building and remediation this summer, which will take an estimated nine or 10 months, followed by a roughly 18-month construction period for the new building. Environmental contaminants on the site include asbestos and polychlorinated biphenyls (PCBs) in the building materials, as well as underground storage tanks.

“I hope by early 2024 everything is up and running,” Abunasra said.

“Multiple sources are extremely interested in the project,” he said regarding the financing.

“I think this is going to be a catalyst for everything,” Abunasra said, noting that the redevelopment of this parcel should spur other transit-oriented projects. Trout Brook Realty and the West Hartford Housing Authority have already constructed one successful TOD project – 616 New Park – and the under-construction 540 New Park project is also a key development being built nearby.

Abunasra also owns the parking area on the north side of New Britain Avenue currently used for Ashley HomeStore, but that is not part of this development plan.

The brownfield program allows municipalities, regional development authorities, or land banks – not businesses – to apply for grants that would assist with brownfield redevelopment projects that could then result in significant economic impact to the community. Economic Development Coordinator Kristen Gorski said this is the first time the town has submitted an application to the program, which is now in its 14th round.

The Town Council had to approve a resolution to allow the application to be made, and that took place on Oct. 12. She then submitted the application in October, and once received the grant monies are then passed along to the developer through a pass-through or sub-recipient agreement.

“We are appreciative of the state’s efforts to continuously support brownfield remediation in Connecticut, and proud to be awarded funds to support the cleanup of this key site,” Gorski said. “The environmental remediation of contaminants on this property will support the health of the community, and assist with the redevelopment of an otherwise challenging site adjacent to a vibrant neighborhood of residents and businesses.”

Gov. Ned Lamont announced Thursday that a total of approximately $17.9 million in state grants had been awarded to help with the costs of remediating 40 blighted parcels in 13 towns and cities across Connecticut for the purposes of putting them back into productive use.

“The grants are from the Connecticut Department of Economic and Community Development’s Brownfield Remediation Program. They are expected to leverage $427 million in private funding and will help in the investigation and clean-up of approximately 78 acres of land,” a news release from the governor’s office stated.

“Cleaning up blighted properties that have been vacant for decades and putting them into productive use will ultimately generate back many more times the amount of these grants through private investments,” the governor said in a statement. “If we remediate these properties now, we can turn an eyesore into an asset, revitalize neighborhoods, and transform otherwise unusable property into new space for businesses and residents.”

Other state and local officials also lauded the awarding of the grant and expressed their excitement about the project.

“This is a critical investment not only for our environment but also for economic development,” state Sen. Derek Slap said in a news release. “The transportation infrastructure and other housing projects sprouting up are helping to spur more density and economic activity – and this is another step in that direction. I believe this also helps in the effort to create a commuter rail stop in West Hartford. There’s more work to do but make no mistake this is very good news for the town and region.”

State Rep. Kate Farrar, whose 20th District includes the property, thanked the governor and DECD for their investment in the town.  “Our community is focused on transit-oriented development and expanded housing to strengthen economic development and create vibrant neighborhoods to live, work and play. This investment in the 20th District will be critical in achieving that long-term goal,” she said.

“I am grateful to the Governor, DECD and our state delegation for their support to invest in the remediation of this important parcel in our town’s transit corridor,” said Mayor Shari Cantor. “This property redevelopment will add to the area’s vibrancy, promote reinvestment, and benefit our community and the region.”

Town Manager Matt Hart also thanked Abunasra for his investment in the community, and said he’s excited to bring the plans to fruition. “This project will serve to enhance this important transit corridor and add to Elmwood and West Hartford’s vitality,” said Hart, adding his thanks to the governor and DECD.

Gorski said the contract for the grant will be executed by DECD, and extensive investigation and vetting was done prior to the awarding of the funds.

The project aligns with the town’s 2020-2030 Plan of Conservation and Development (POCD), and would meet the goals of expanding higher-density, mixed-use development in proximity to the CTfastrak station. 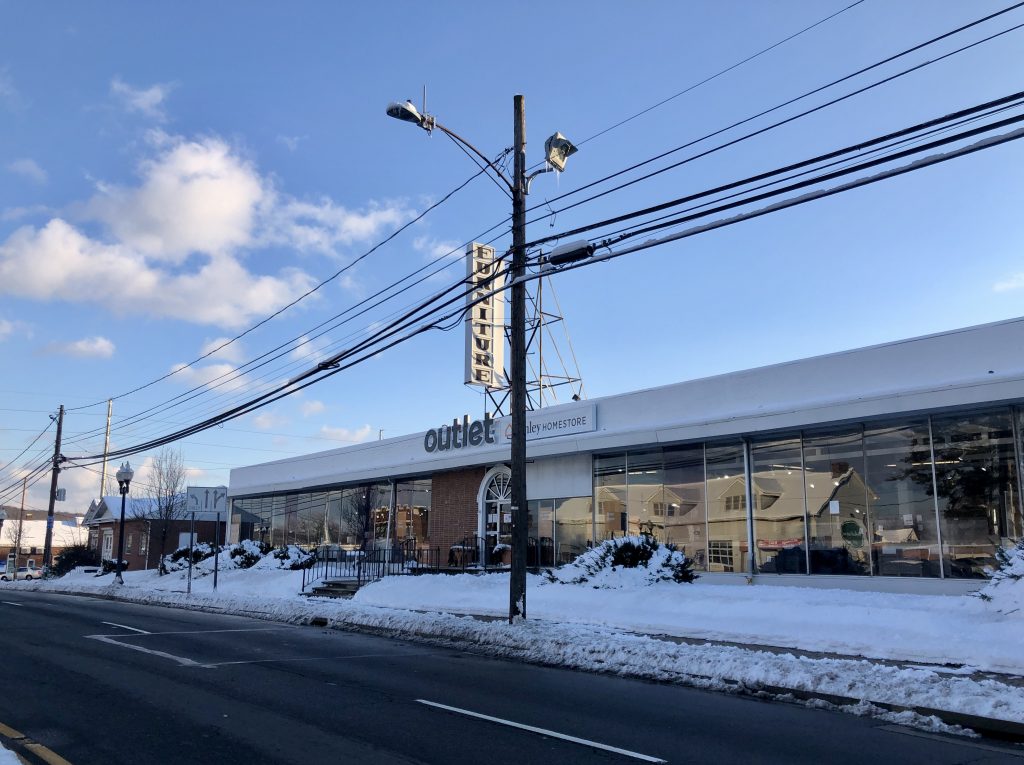