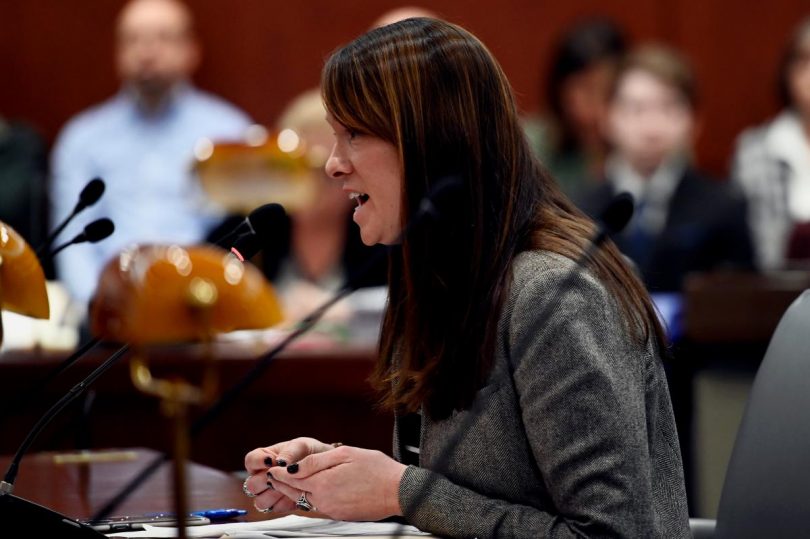 Rep. Jillian Gilchrest testifying during a public hearing in February, a few weeks before the legislative session was suspended due to the COVID-19 outbreak. Gilchrest, a freshman Democrat from West Hartford, unseated her challenger by going door-to-door, before social distancing was the norm. Photo credit: Joe Amon, Connecticut Public Radio (Courtesy of CTMirror.org)

Two candidates have announced they are seeking the Democratic nomination in West Hartford’s 20th House District, but the manner in which the nominating convention will be held, and how a candidate would be able to petition, remains to be decided.

It’s a vital place in American politics, the border between what is private and public. It is where local elections are won and lost, and candidates are desperate to know how long the COVID-19 pandemic makes the space off-limits.

We’re talking about your doorstep.

As a challenger to a 12-term incumbent in the state House of Representatives, Jillian Gilchrest introduced herself to West Hartford voters on their doorsteps in the early months of 2018, then qualified for a Democratic primary by collecting hundreds of signatures in May, again going door to door.

Gilchrest wonders if the path she followed to the Connecticut General Assembly is now closed, an inconvenience for incumbents – and a potentially insurmountable obstacle for challengers who have harder fights for visibility, funds and ballot access.

“Door to door was the way I won,” Gilchrest said.

The impact of the coronavirus on politics understandably has focused on two questions: Will it be safe to go to the polls? And can candidates compete for attention with a pandemic that has claimed a thousand lives and hundreds of thousands of jobs in Connecticut?

Candidates, especially newcomers, are confronting more immediate questions: In a time of social distancing, how can they introduce themselves to voters and get on the ballot?

On the other side of West Hartford, Kate Farrar is trying to be this year’s Gilchrest. She created a candidate committee in January and began door-knocking in hopes of forcing a primary on Aug. 11 against Rep. Joe Verrengia, a Democrat first elected in 2010.

Verrengia announced around the same time that he would not  seek re-election, but Farrar faces competition for the nomination from Sherry Haller, the executive director of a non-profit, the Justice Education Center.

Haller opened her campaign in late March with these words, “This is a very difficult time to make my announcement. I am hoping that I will be able to introduce myself in person to many more of the voters in our district as soon as it is safe to gather together again.”

Farrar stopped door-knocking and other voter outreach three weeks ago, shifting to activities related to pandemic relief. But she is wondering how the nominating convention will be conducted next month and what will follow.

“We need to hear sooner than later on that,” she said.

The recently elected Democratic chair of West Hartford is John M. Bailey II, named for the grandfather who was the national party chair in the 1960s and the state chair for nearly three decades, from 1946 until 1975. His grandfather’s career began when local nominations were tightly controlled by the party establishment.

Bailey expects to preside over a virtual convention.

After consulting with state party officials, he plans to invite the 23 delegates to the nominating convention in the 20th House District, where Farrar and Haller are competing to succeed Verrengia, to gather on Zoom, the online video conferencing tool that has become essential to social, commercial and political life in the age of social distancing.

“We’re kind of making it up as we go along,” Bailey said.

The easy part, then…

The convention is the easy part. More difficult will be what comes next, especially for the runner up.

For challengers in single-town legislative districts like the 20th, petitioning is the only way to qualify for a primary, as Gilchrest did in 2018. Petitioning also is a path for candidates in multi-town districts who fail to win 15% of the delegate vote at their nominating conventions.

The window for petitioning is narrow. It opens on May 26, the last day when nominating conventions can be held under this year’s elections calendar, and closes at 4 p.m. on June 9, the deadline for presenting signatures for verification at local town halls.

The secretary of the state’s office has no answer for candidates wondering what to do if social distancing rules are still in effect, complicating efforts to collect signatures. Will the governor use his emergency powers to change the rules? Will the percentage to qualify at a convention be temporarily lowered, as Secretary of the State Denise Merrill has recommended?  What about the number of signatures required for those who must petition?

“There is no easy solution,” Merrill said.

Beyond the immediate question of ballot access in a primary are the broader issues of what political tools will work in the midst of a pandemic that may wax and wane in unpredictable ways over the summer and into the fall.

“We’ve been thinking a lot about what campaigning is going to look like,” said state Sen. Will Haskell, D-Westport, who won an upset victory over a Republican incumbent as a recent college graduate in 2018.

He is grateful to be among the candidates who completed fundraising before the pandemic took hold in Connecticut. He already has raised sufficient funds in his district to qualify for public financing. Qualifying contributions can be as little as $5, but no one wants to send a solicitation to someone who recently lost a job, their employer deemed non-essential.

“I’m hearing now from folks who are unemployed,” Haskell said. “Fundraising in this environment would be incredibly difficult.”

Haskell didn’t have to fight for a Democratic nomination that wasn’t seen as especially valuable in 2018. But he still faced the baseline challenge for all newcomers: building name recognition against a well-known incumbent. He employed retail politics, a catch-all for all forms of face-to-face campaigning and still the standard for Connecticut legislative races.

“Our campaign was totally based on meeting people in living rooms and showing up at every possible community event,” Haskell said. “How can we have that same approach?”

Political operatives in both parties say the short is answer probably is: You can’t.

“The tactical elements you usually rely on to communicate – door knocking, town halls, coffee on your corner – those things are not going to be feasible for the foreseeable future,” said Liz Kurantowicz, a Republican consultant.

Digital advertising and social media are obvious alternatives, but the consultants note that the rules are shifting. Twitter is no longer accepting political advertising, and Facebook is tightening the parameters for how political ads can be placed and constructed.

“It was insane what you could do in 2017 and 2016,” said Mike Farina, a Democratic consultant. Facebook turned a blind eye to campaigns that took news articles and changed headlines and photos, then posted them as real.

John Kleinhans, a Republican consultant who specializes in digital strategy, said the web this cycle will respond to candidates whose personalities and passion are evident, not those whose ads are static.

He said Haskell, aside from showing a talent for old-fashioned retail politics, smartly used Instagram, as did one of his clients, Susan Hatfield, a prosecutor and former college athlete who won the GOP nomination for attorney general as a first-time candidate.

“She was prolific in creating content, whether shooting hoops or turning cart wheels,” he said.

With 46.5% of the vote, she outperformed the rest of the Republican under ticket.

The oldest and simplest techniques also are getting second looks while many voters are confined to their homes. Farrar, the executive director of the Connecticut Women’s Education and Legal Fund, said she is writing letters and making phone calls.

“It’s getting back to basics and connecting to people,” she said.

In 2018, Gilchrest’s supporters wrote post cards to friends and neighbors.

“The post cards still can be effective,” Gilchrest said.

But she used the postcards and social media as supplements to showing up on doorsteps.

“That’s where you can say, ‘This is who I am.’ That takes place at the door,” Gilchrest said.  “Online can only get you so far. You’re still a caricature.”

Gilchrest said she has trouble imagining a successful challenge to an incumbent under the current conditions.

So does Bob Stefanowski, the Republican nominee for governor in 2018 who qualified for and won a primary with an unconventional campaign. He skipped the GOP nominating convention and focused on door-to-door canvassing, matched with early television ads. To qualify for the primary, his campaign had to collect signatures from two percent of registered Republicans, which was 9,081 voters.

“We had a big army of people going door to door with a list of Republicans,” said Stefanowski, describing how he qualified for the primary and built a voter list of likely supporters. The interactions at the door could not be completed at a COVID-safe distance.

“I don’t know what the solution is. You certainly don’t want to make the health crisis worse by putting people at risk to get a number of signatures,” he said.

Farina said things might ease by the fall and allow door-knocking, but time already is short for challengers in a primary.

“The Republican and Democratic primaries, they are in early August,” Farina said. “A very competitive primary is up and running by April.”

The pandemic played a role in the decision of a client, John Perrier of Stafford, not to make a second try for state Senate in the 35th District. Perrier lost an open race with 49% of the vote two years ago, but he hesitated this year while his wife was recovering from an illness.

By the time he opted in, another Democrat, Lisa Thomas of Coventry, had sewed up the endorsement by organizing around delegate selection.

Incumbency almost always is an advantage in state legislative races, but more so in a crisis.

State Rep. Craig Fishbein, R-Wallingford, is among the incumbents using Facebook for soft campaigning during the COVID-19 crisis. They are taking advantage of incumbency by offering straightforward updates of the latest developments in Connecticut, especially the frequent executive orders signed by Gov. Ned Lamont.

Many are sending out weekly or daily informational bulletins with useful links to executive orders and explanations of newly available benefits.

“That is a passive way of reaching people. People are going to my web site in overwhelming numbers,  more than ever. It isn’t campaigning, but it’s showing your constituents you have value and you’re there for them. Hopefully that turns into a vote on election day,” Fishbein said. “That’s a benefit of being an incumbent, quite frankly. For the new guys, it’s going to be quite difficult.”

Fishbein, a conservative unafraid of controversy or sharp debates, said voters are looking information, not partisanship.

J.R. Romano, the state GOP chair, said tone is important; it is unseemly to be overtly political.

“It’s a really tough situation for challengers,” Romano said. “It’s a balancing act, for sure, for incumbents.”