Candidates in Connecticut’s open race for governor made closing arguments Sunday at rallies in a cathedral and a warehouse, in conversations at diners and a sports bar, and at one sparsely attended press conference set with Bushnell Park foliage and a sun-splashed State Capitol as a postcard picture backdrop. 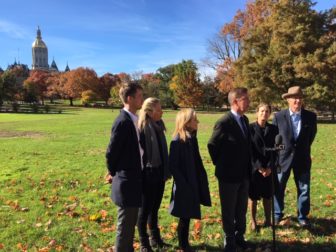 More than one million voters are expected to go to the polls Tuesday to choose a successor to Gov. Dannel P. Malloy, an unpopular Democrat ubiquitous in Republican Bob Stefanowski’s commercials, just as a polarizing Republican president, Donald J. Trump, is central to the campaign of Democrat Ned Lamont.

Malloy’s name was repeatedly invoked Sunday at a GOP rally at United Concrete Products in Wallingford. At an African-American church in Bloomfield, Lamont and other Democrats publicized what Stefanowski seldom mentions: He is endorsed by Trump, and he supports the president’s dim view of the Affordable Care Act.

“Ten years ago today, Barack Obama was elected president, and two days from now we get the first chance to send a message that we reject the president who is trying to destroy everything that President Obama tried to do,” Hartford Mayor Luke Bronin told Democrats at the First Cathedral, a 3,000-seat megachurch.

The campaigns are closing much as they began.

Stefanowski’s tight focus is his promise to grow the economy with supply-side economics, slashing state spending and phasing out the state income tax over eight years. Since opening his campaign last year, Stefanowski has resisted talking about anything other than taxes – and Malloy. 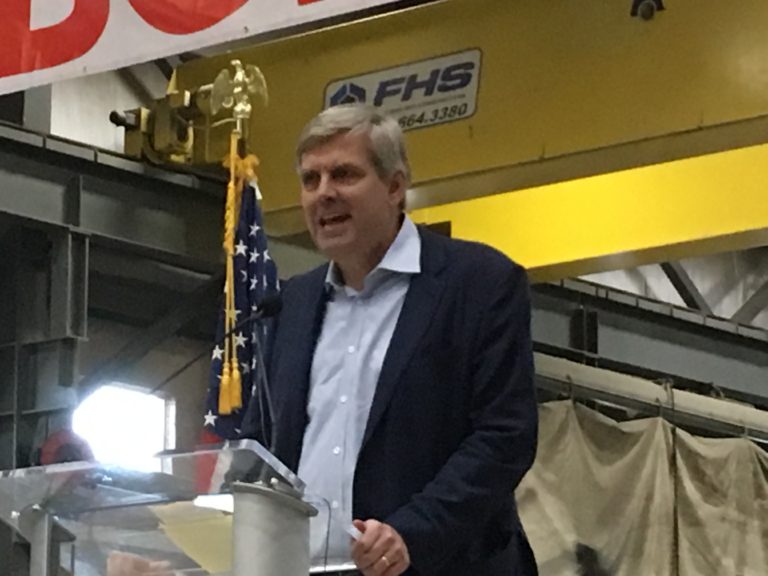 “You know why I say the same thing?” Stefanowski told the crowd at a GOP rally in the United Concrete warehouse. “Because that’s what people care about.”

Lamont is running what Democrats say is a “Connecticut values” campaign, calling Stefanowski’s fiscal ideas a reckless and naive approach to gut state services for tax cuts that would benefit the wealthy. He promises to work with business, labor and legislators of both parties to stabilize the state’s chronically unsettled finances.

A businessman who volunteered in the Bridgeport schools and more recently has taught at Central Connecticut State University, Lamont said he thinks of students when he hears Stefanowski say he can wring a billion dollars or more from the $20 billion budget without harm to anyone.

Also on the ballot are three other candidates, including Oz Griebel, a retired business leader and former Republican running as a petitioning candidate. He has scored as high as 10 percent in recent polls. Lamont has led the field in five of the six public polls conducted in the past month, but most of the polls show Griebel taking more votes from Lamont than Stefanowski. 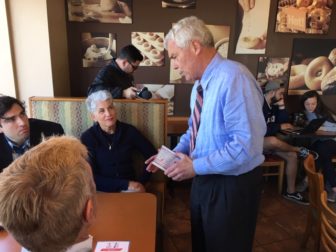 Griebel says Connecticut needs a break from partisan politics, but he has struggled to be taken seriously as a contender, not just a spoiler.

“If you really want change, if  you want to put Connecticut back, you’ve got to take a look and say, ‘Don’t fall into this trap of voting for the lesser of two evils,’” Griebel said. “It’s a hard argument, no question about that.”

Democrats, who tend to win or lose elections based on turnout in New Haven, Bridgeport, Hartford, Stamford, and a dozen key suburbs, lack the ground game assembled by Malloy four years ago, when Democrats worked for more than six months to contact and turn out Democrats who tend to vote in president elections, then skip the mid terms.

But elected officials in Bridgeport, Hartford, and New Haven say they see a get-out-the-vote effort gelling in recent weeks, led in part by legislative candidates.

On Sunday, Lamont arrived at the First Cathedral to find three former rivals for the gubernatorial nomination waiting, including Bridgeport Mayor Joseph P. Ganim, who made the long drive from Fairfield County with Mario Testa, the city’s party chairman. Ganim was his only opponent in the primary.

Lamont also is helped by the presence on the ballot of U.S. Sen. Chris Murphy, a Democrat seeking his second term, and Jahana Hayes, a charismatic former teacher of the year trying to become the first black woman elected to Congress from Connecticut. She is running in the 5th District. 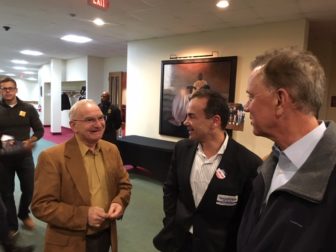 “We are united,” Lamont told the crowd in Bloomfield, speaking after Bronin. “And as Luke said, so much is at stake in a little over 24 hours, and I need us to stay united. I need us to stand up. I need you believe that it makes a difference. I need you to believe that we’re going to turn this state around. We’re going to fight for each and every one you. Do you believe it?”

Both major-party gubernatorial candidates campaigned with their families. Annie Lamont and two of their three children joined the nominee at a news conference in Bushnell Park.

In Wallingford, Stefanowski’s wife, Amy, and their three daughters were on stage, as was James Grasso, the son of the late Gov. Ella T. Grasso, who is trying to help Stefanowski appeal to conservative Democrats.

Grasso told the crowd that the liberal wing of the Democratic Party grew from “a little burr” in the side of his mother, a Democrat, into a major obstacle. He blamed the growing influence of the left for the state’s economic decline, culminating in the last eight years.

“I watched the state hemorrhage under Malloy, he said.

Not everyone agreed with the focus on Malloy and Trump.

“Neither Donald Trump, nor Dan Malloy are on the ballot,” said former U. S. Comptroller David Walker, who sought the GOP nomination but is now campaigning for Stefanowski. “This should not be about them as individuals.”