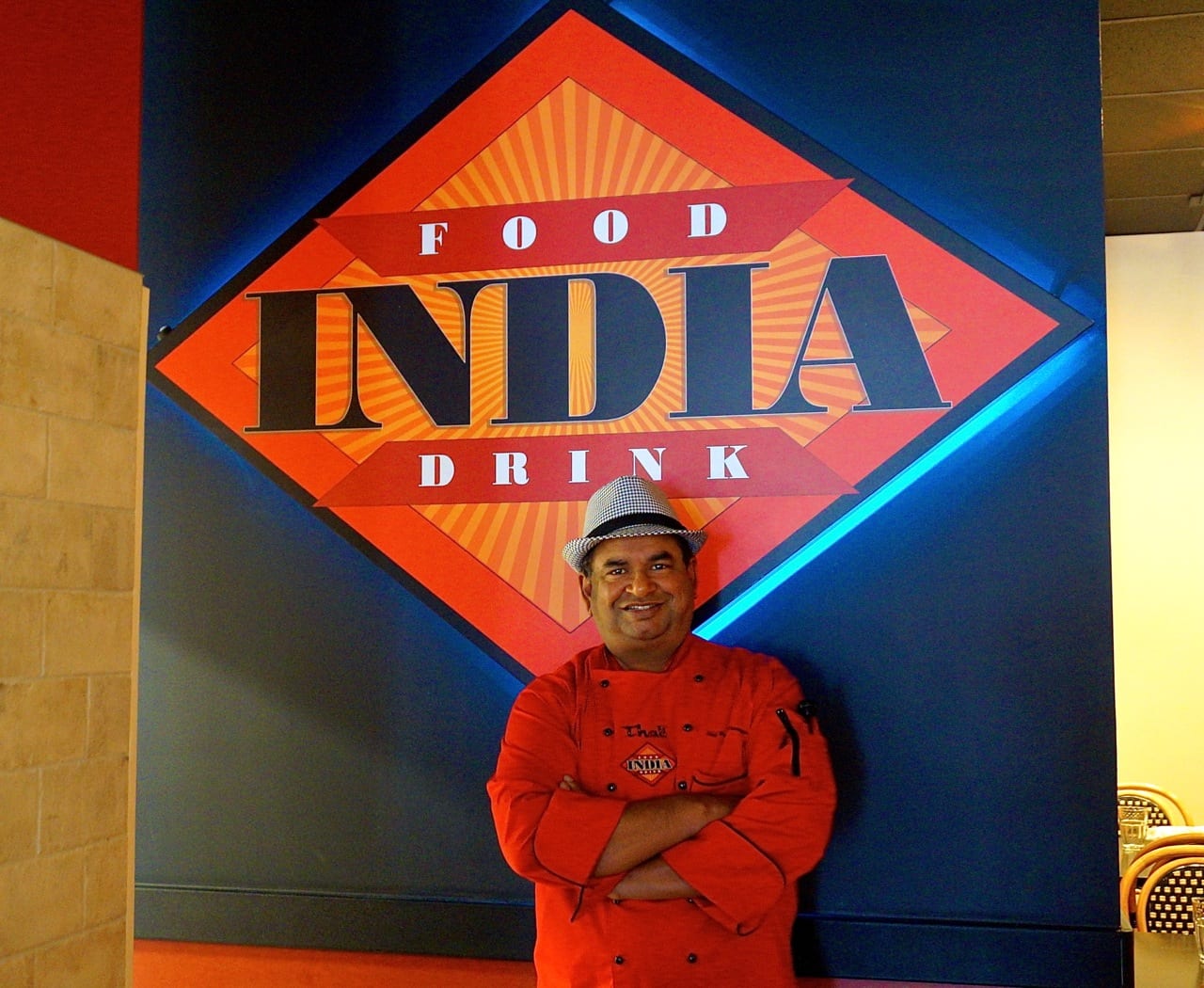 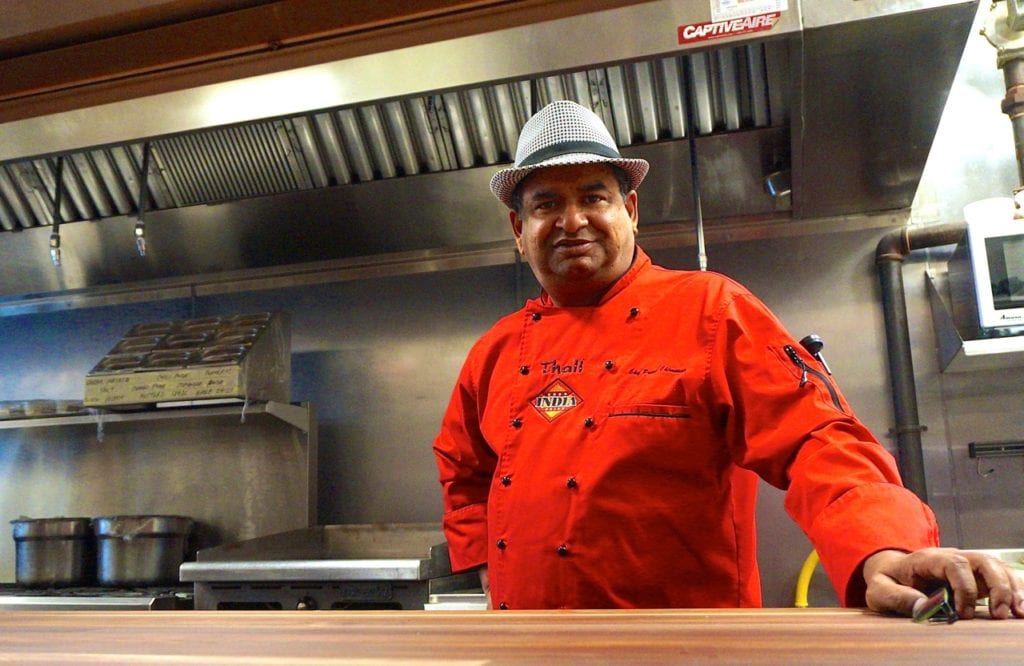 A gleaming open kitchen with a butcher block counter and the enticing aroma of spices immediately welcome guests to INDIA Restaurant & Bar, which brings a fresh and modern approach to Indian cuisine in West Hartford.

Acclaimed chef Prasad Chirnomoula of Five Star Restaurant Group is already the owner of Thali (New Haven and Ridgefield), Thali Too (New Haven), Oaxaca (New Haven), and INDIA New Canaan, but he can hardly contain his excitement about the newest restaurant at 54 Memorial Rd. in Blue Back Square.

He’s eagerly anticipating the synergy he will have with other great restaurants like Cook & the Bear which will be right next door, and the opening of the Delamar Hotel right down the street. “This will be a hot corner,” Chirnomula said. 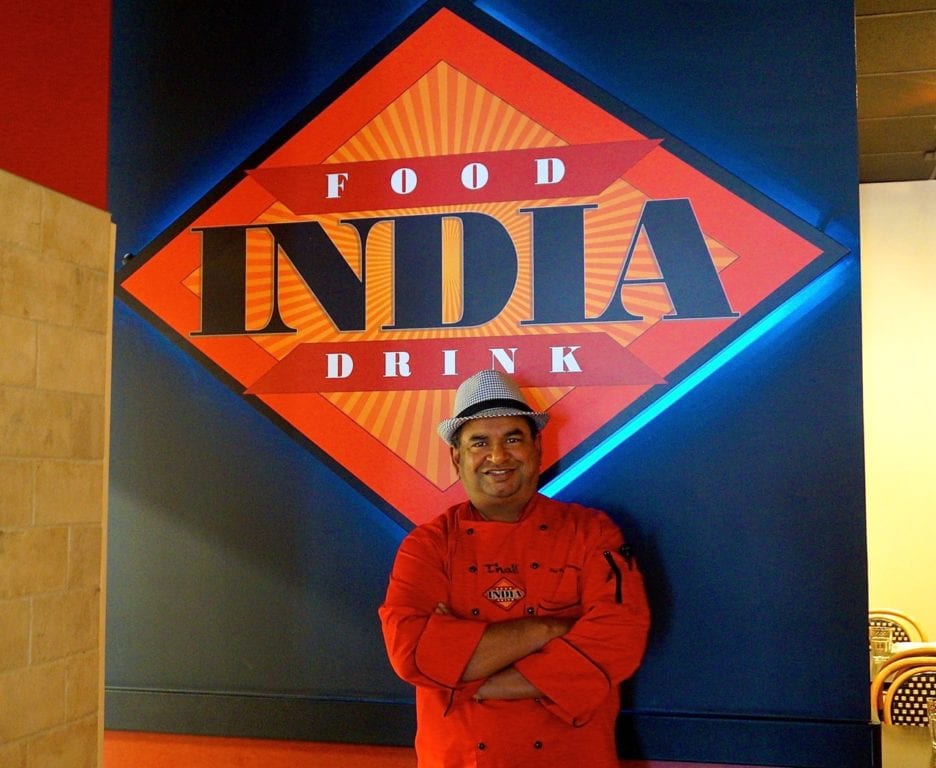 “This town is fascinating to me. People want food here and it has a vibe like New York City or Boston. It’s a good foodie town,” Chirnomula said Wednesday as he made last minute preparations for a private preview party in advance of the Friday night official opening of INDIA Restaurant & Bar.

Chirnomula wishes he had opened INDIA in West Hartford 10 years ago – back when Thali received a three-star rating from the New York Times and he fielded many calls about coming to Hartford County and the soon-to-open Blue Back Square. He’s excited about now making his mark on Central Connecticut.

INDIA is not like other Indian restaurants, Chirnomula said. Although he will serve some of the classic favorites from Northern India, the menu emphasizes the distinct and unique flavors of all four regions of the country. The food is creative and beautifully plated. Everything is fresh and made from scratch, with locally-sourced ingredients when available, and no artificial colorings or preservatives.

“The menu is fun,” Chirnomula said. The left side of the menu – featuring an assortment of small plates – is where the most unique flavor combinations can be found. 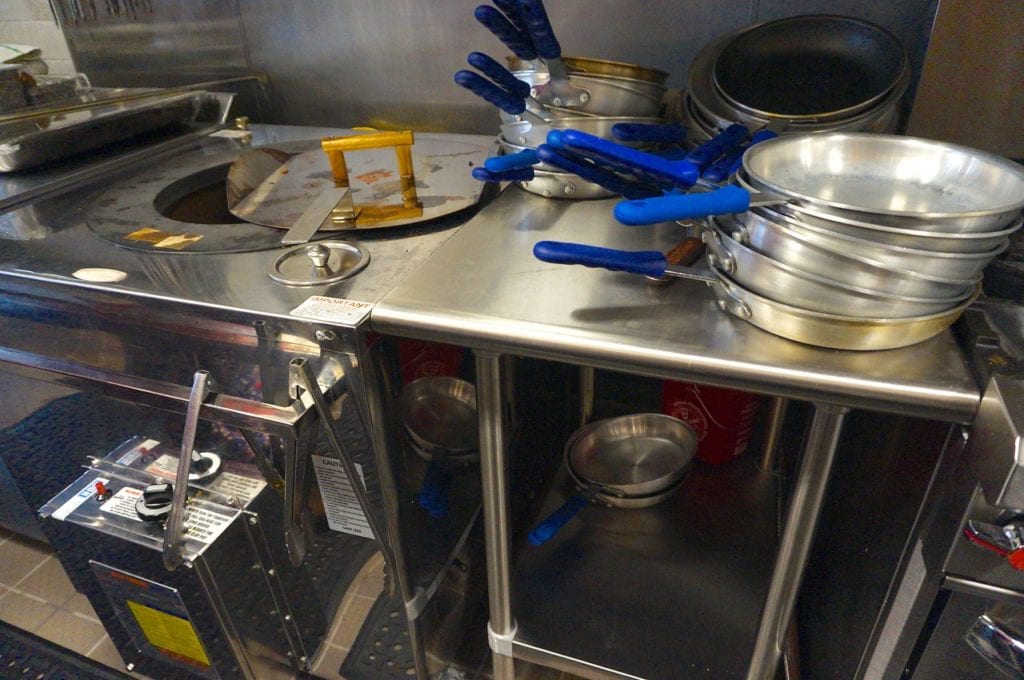 The central feature in the kitchen is the Tandoor oven, Chirnomula said. It’s clay-lined and reaches temperatures of 700 degrees, and is where much of the food is cooked. He marinates chicken, lamb, and prawns and demonstrates how he skewers the pieces and rests the skewers in the bottom of the oven. “The hot clay does the cooking,” he said, and a whole chicken cooks in just 10-12 minutes.

“It’s grilled, and it’s pretty healthy,” he said. Foods are marinated in yogurt and other natural ingredients. The spices do the tenderizing. Any fat drips off into the oven.

“No meal is complete without a good Indian naan bread,” Chirnomula said. INDIA offers numerous varieties of naan – white and wheat, plain and filled. The dough is all made fresh, hand flattened, shaped on a “bread pillow” and then held against the Tandoor’s clay wall. “It goes from oven to table in just seconds and is served piping hot,” he said.

“There’s so much flavor. Indian food is so bold. There’s no need for salt and pepper,” said Chirnomula as he highlighted a few must-try items on the menu. 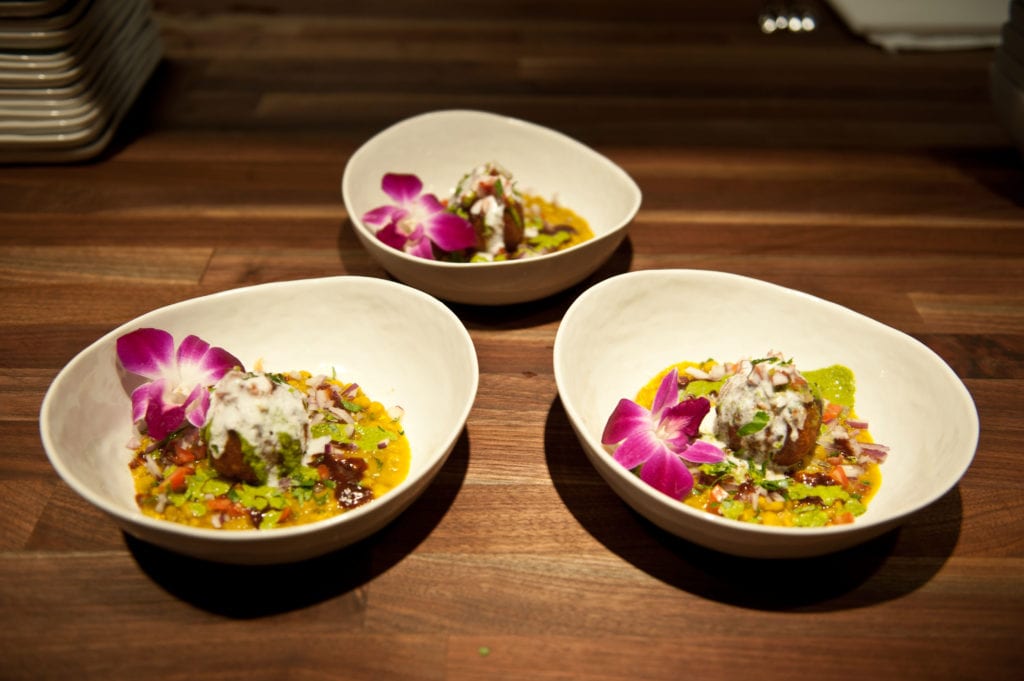 The left side of the menu is divided into vegetarian, seafood, and lamb/chicken. The crispy baby kale (served with tomatoes, tamarind, mint, and green chili chutney) is “nice and light, with excellent flavors,” he said.

Ragda Patties are “sweet, sour, and spicy. There are three levels of flavors,” Chirnomula said of the potato spheres filled with pea smash and served with a selection of chutney.

Another must-try is the Paani Poori, a traditional Indian street food. “It’s an interactive appetizer,” Chirnomula said. Diners takes the mini-puff of semolina, tap a hole in it, add a mixture of chickpeas and chutney, top with a bit of citrusy water, and pop it into their mouth. “One gulp,” he said. The food is commonly sold throughout India from stalls, like hot dog carts, he said.

Kulcha is “like a pizza pie without the cheese,” he said. It’s filled with scallions, green chilis, and chicken, and cooked agains the Tandoor’s clay wall. 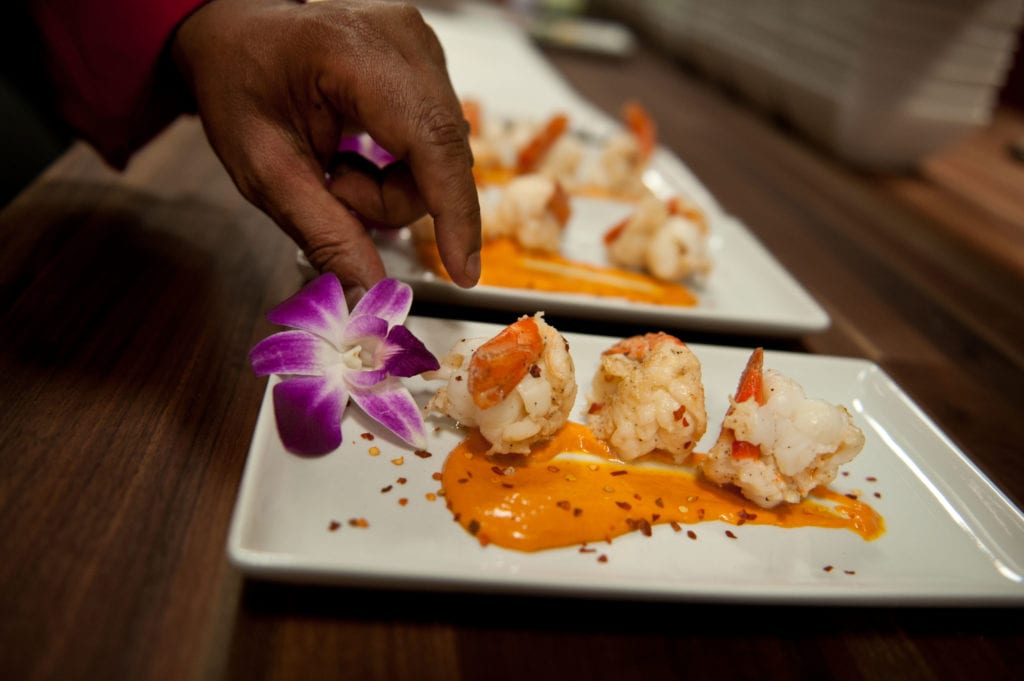 “The Tandoori grilled chicken wings, if you’re a wing fan you need to have that,” Chirnomula said. He said his own mouth was watering just talking about them.

Even the classics have a twist, and are served with his own sauce recipes. The exception is the Andhra Masala – a southern Indian dish which uses his mother’s recipe.

“We take pride in our biryani,” said Chirnomula of the Indian staple that is served vegetarian or with goat, lamp, chicken, or shrimp.

The options for vegetarians are plentiful, as are the gluten-free offerings. There’s even a children’s menu with some American favorites as well as a grilled chicken kabab.

There will eventually be nightly specials, but since the restaurant is brand new, everything is a special right now, he said. Complete menus are provided in PDF form below.

A few signature cocktails highlight the beverage menu, including the “Faithfully Ginger,” crafted with fresh turmeric and ginger, which won Faith Middleton’s “Food Schmooze Martini Competition” in 2012 and 2014. There’s Indian beer, and a “short but well-chosen” wine list. A non-alcoholic favorite is the mango lassi, made from churned yogurt with pureed mango and sugar.

Leave room for dessert, which Chirnomula said is “beautiful.” There’s Pistachio Kulfi (an Indian ice cream that’s as refreshing as a popsicle on a hot summer day), and Dhenna Rabdi made from fresh Indian cheese, steam-cooked and soaked in pistachio and almond milk.

The cuisine is creative, and Chirnomula takes pride in the plating, the colors, the service, and the ambiance. “The food is important, but at the end of the night it’s an ‘accident on the plate.’ I want to be warm and welcoming,” he said of the overall experience. 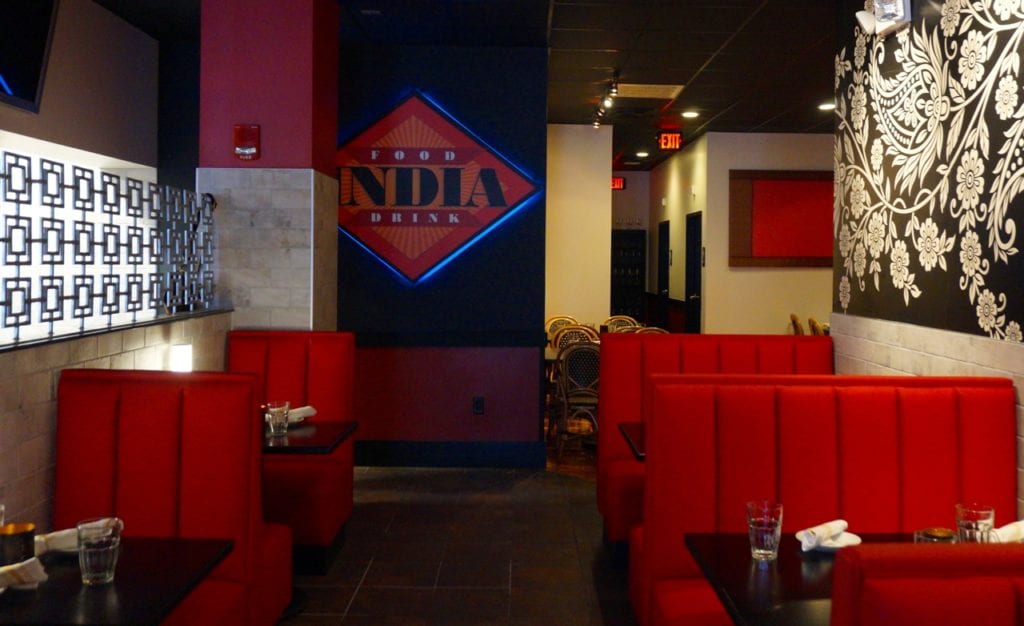 INDIA Restaurant & Bar seats 51, with some of those seats in a more private area toward the back. The bright red booths are a pop of color that accent the black and white print painted on canvas that covers the upper part of the walls. It was custom-designed by a friend, and adds a French flair to the space, Chirnomula said. A painted “rug” adorns the floor of the dining room.

The clean-lined butcher block counter divides the dining area from the kitchen, but it’s very much an open concept with the food prep and cooking all in full view. Chirnomula said he hopes to use the space for cooking classes at some point in the future because it’s the perfect layout. 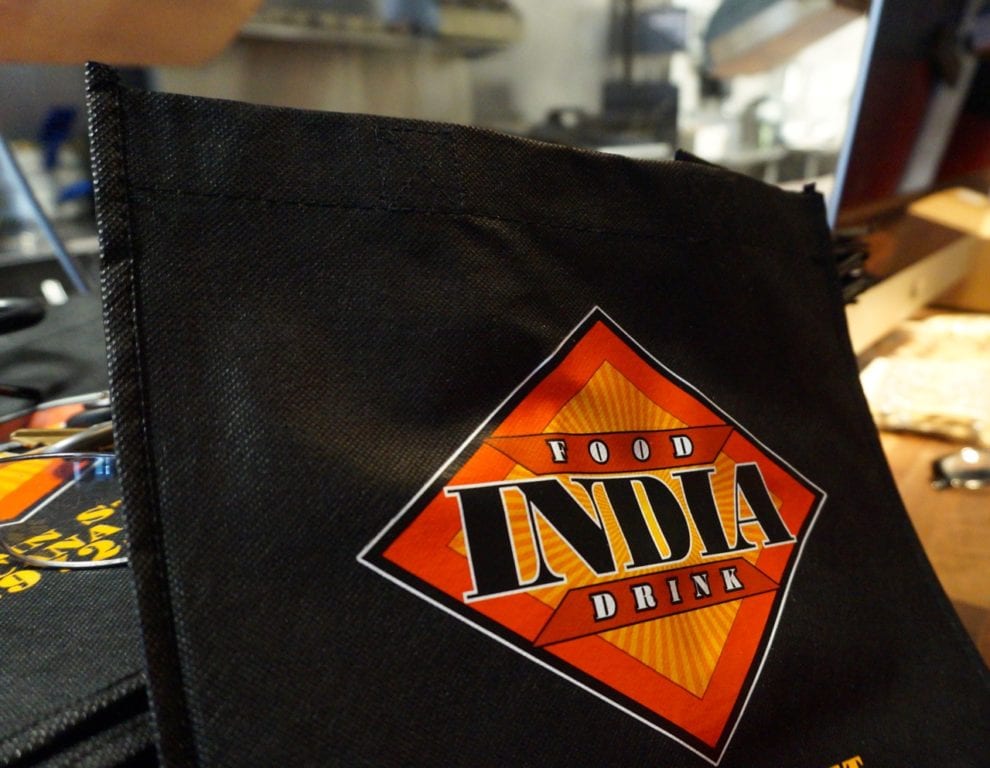 Take-out and delivery will be a major part of the business, Chirnomula said, and he has ordered special reusable bags with the restaurant’s logo. “The food travels so well,” he said. Take-out service will begin Dec. 20 through Grub Hub and Waiter Wheels. Lunch will be served beginning Dec. 24, and the inaugural Sunday brunch will be on Christmas Day.

Chirnomula already knows that parking can be at a premium in Blue Back Square, and is working to get permission for customers to use the loading zone on Raymond Road for take-out during evening hours, in addition to the existing 15-minute spaces in the parking lot outside REI. Diners can also call ahead and pay in advance to get curbside service on Raymond Road.

Chirnomula, his wife Reena, and two daughters live in Redding (he also has two grown children), but he is staying in West Hartford for the next few months and plans to personally run the kitchen for the next six weeks, overseeing staff that he brought from INDIA New Canaan who will remain in West Hartford on a permanent basis. Then he will be back and forth, but will never be too far away to bring new items to INDIA’s menu. Longtime West Hartford resident and restaurant veteran Brad Diffley has been hired as manager. 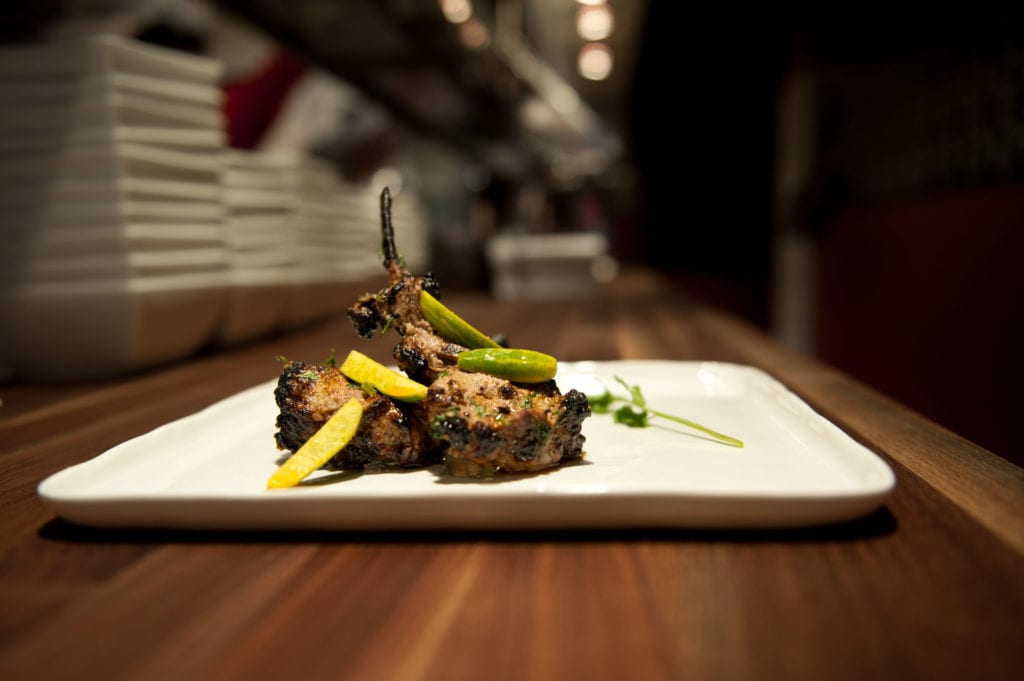 Prices are moderate, with small plates ranging from $6-$17 and entrees priced mostly from $16-$19. It’s a good price point, especially for Blue Back Square, he said. There’s one major exception – the tandoori grilled rack of lamb – which is $34. “It’s lamb like you’ve never had before,” Chirnomula said.

When Chirnomula first announced the West Hartford opening he planned to call the restaurant Thali, but then changed the New Canaan restaurant’s name to INDIA when he added the focus on small plates. The name and the logo were created by Chirnomula’s friend Chuck Dorris, who passed away in May. “He was a true artist,” Chirnomula said.

Dorris also designed the menus for the two James Beard dinners Chirnomula was invited to present. “It’s good inspiration for me,” he said.

The restaurant will open on Friday, Dec. 16, 2016, and will be open seven days a week other than on Monday, Dec. 19 when it will be closed for a private industry night.

Chirnomula is a native of India, who was always passionate about food and studied to become a chef despite his family’s wishes that he become a doctor. After working at the Ritz Hotel in Hyderabad, he moved to the United States in 1986, and worked his way up through the industry from busboy at a Long Island restaurant to eventually cooking at a restaurant in Manhattan before opening his first New Canaan location.

In addition to running the restaurants, Chirnomula leads tasting tours of India, hosts private tasting dinners, teaches cooking classes and offers his services at multiple charity events for such groups as the American Liver Foundation, Varli, James Beard House, the American Red Cross, Share Our Strength, the Connecticut Food Bank, and the Food Bank for New York City. He has been a celebrity guest chef at Foxwoods Food & Wine Festival to benefit Johnson & Wales University, and was the winner of the 2011 and 2013 Elm City Iron Chef competition. He appeared on the Food Network in 2012. 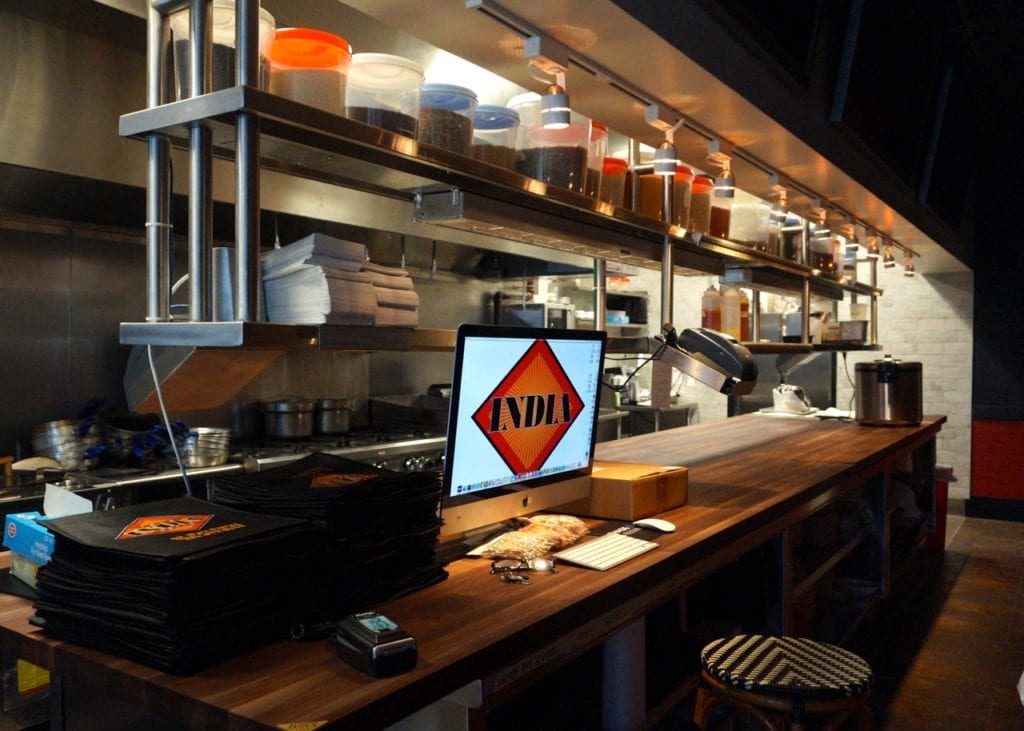 The kitchen at INDIA Restaurant & Bar in West Hartford’s Blue Back Square is open and visible from throughout the restaurant. Photo credit: Ronni Newton 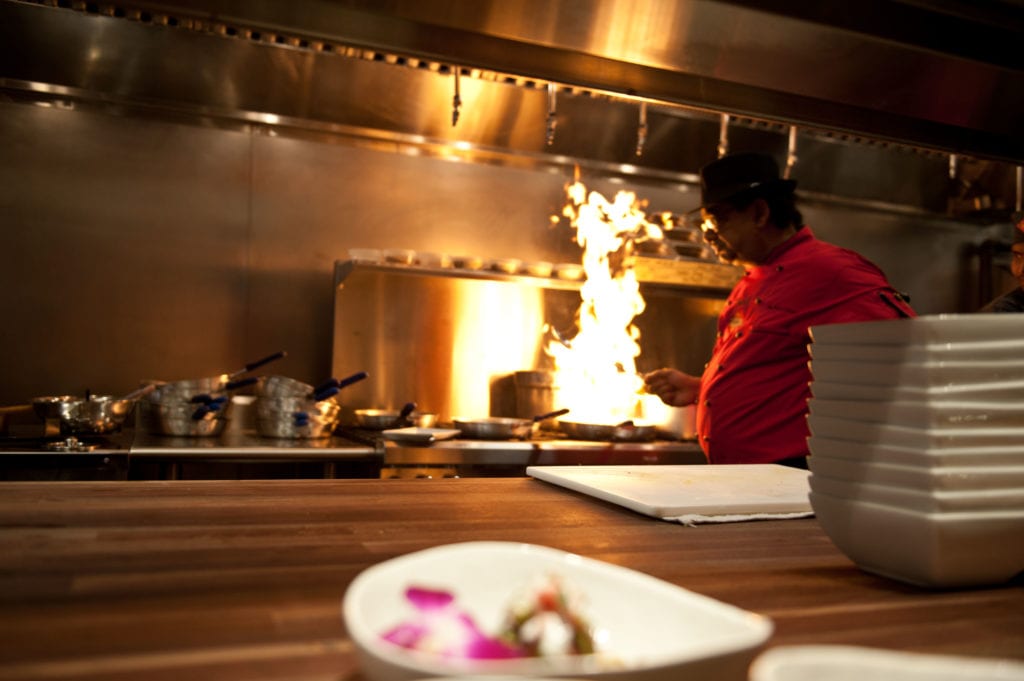 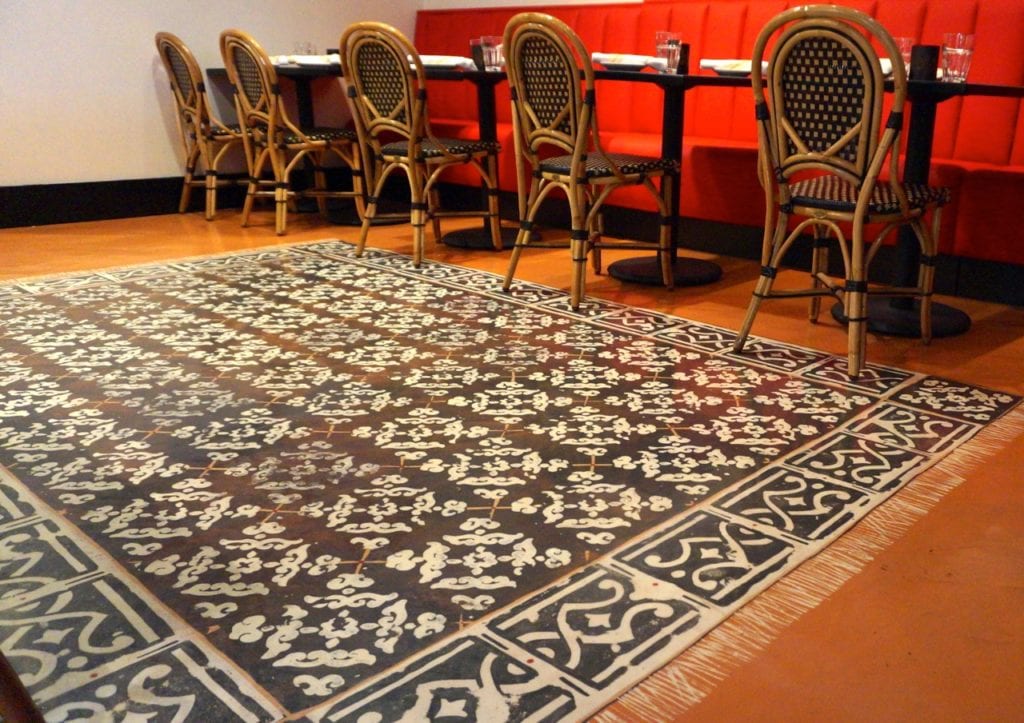 The floor of the dining room appears to be covered with a rug, but it’s really a painting. Photo credit: Ronni Newton 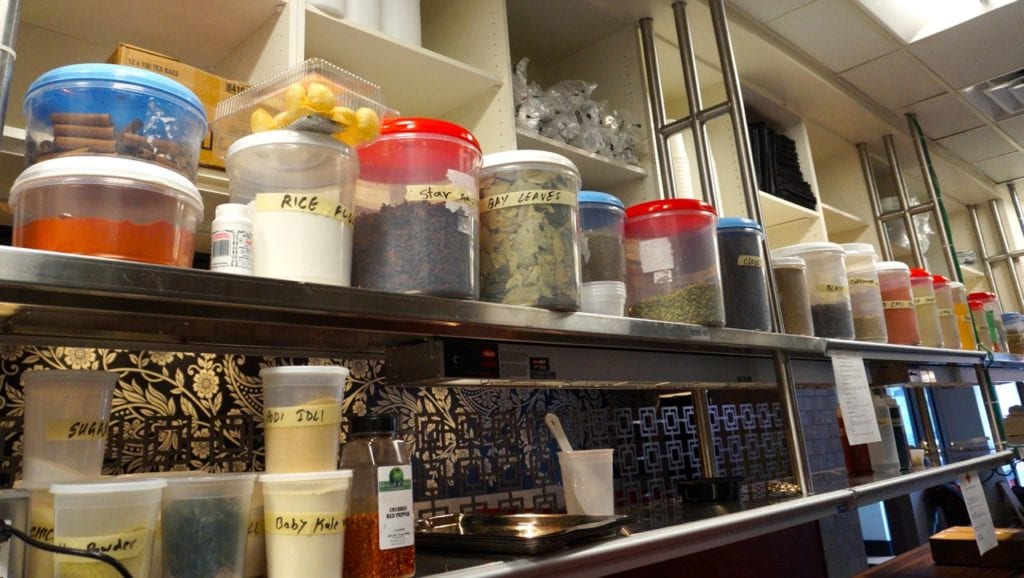 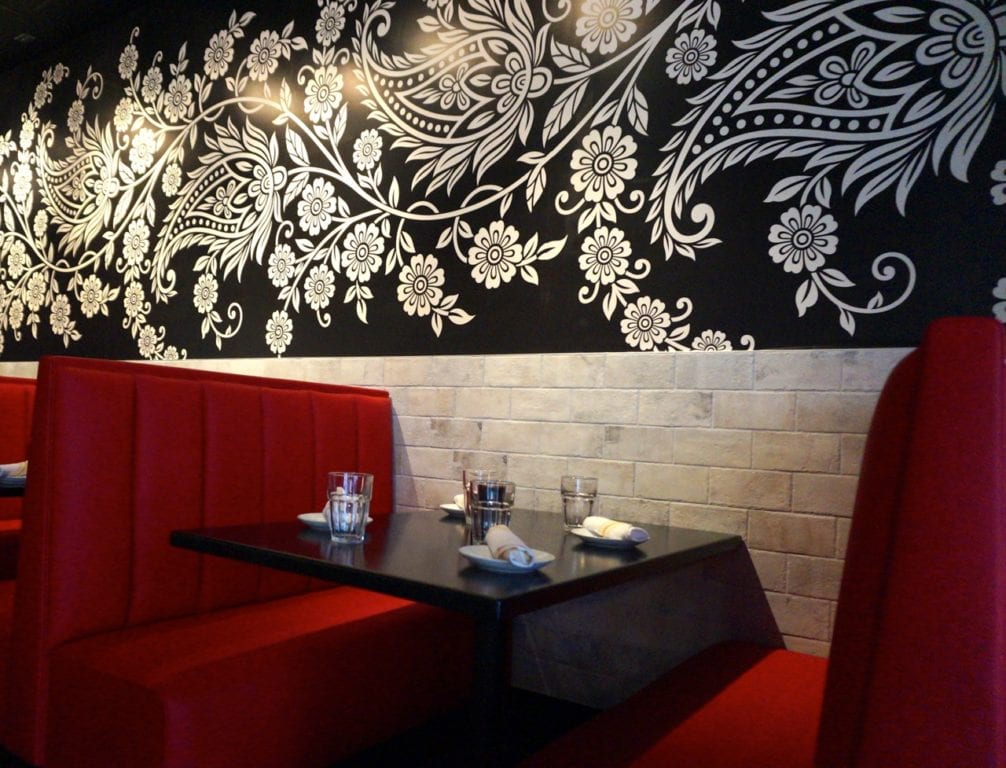 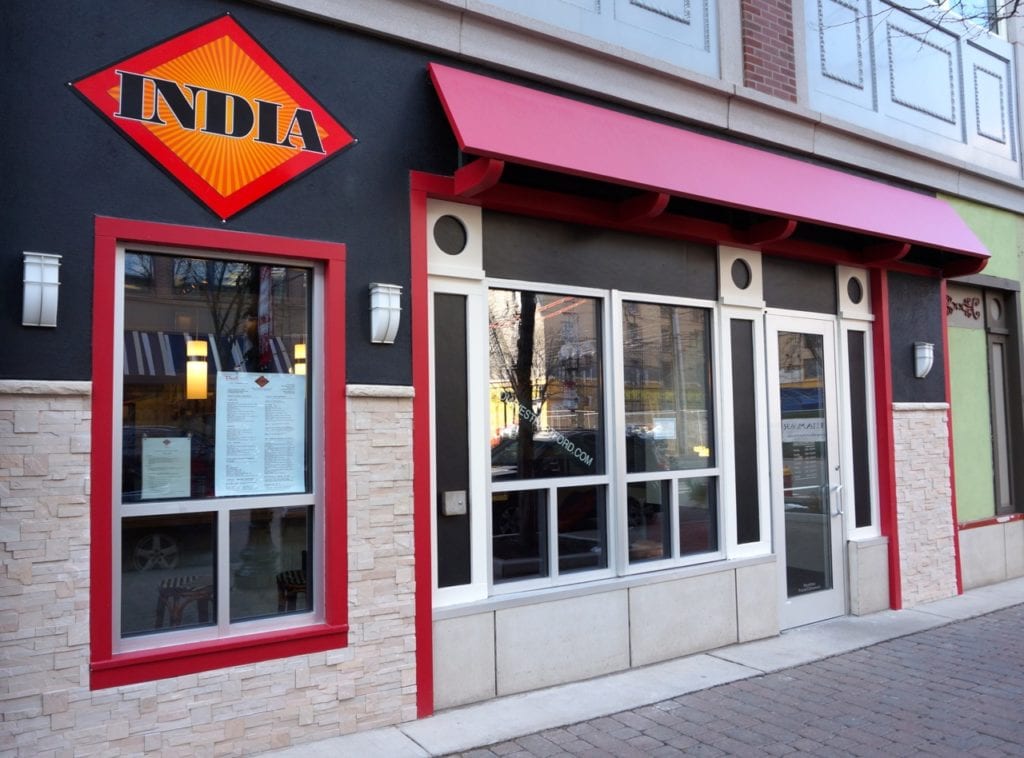