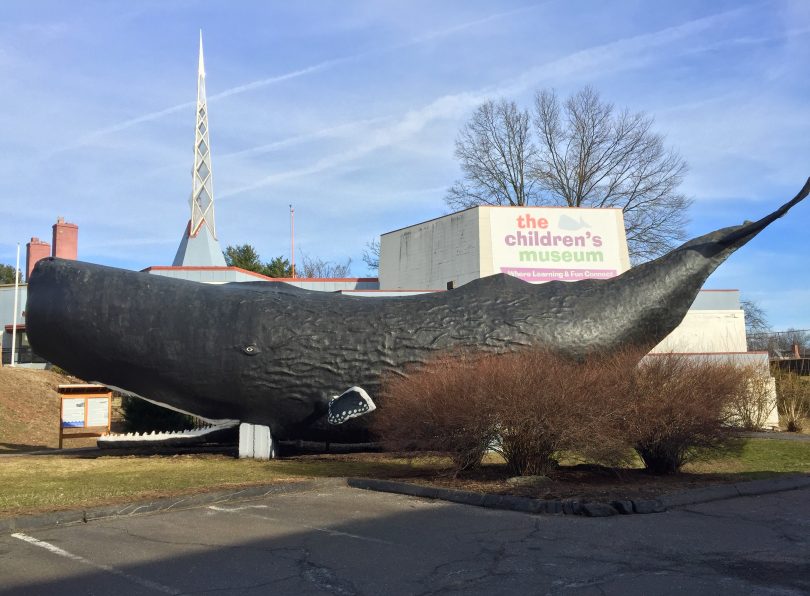 Conny the Whale, the iconic replica of a sperm whale, was constructed in front of the Children's Museum in West Hartford in 1975-76. Photo credit: Ronni Newton (we-ha.com file photo)

The Children’s Museum has been located on Trout Brook Drive in West Hartford since 1958, and will soon choose a new location from among two options.

The Children’s Museum has been a fixture on Trout Brook Drive in West Hartford for more than 60 years, but may soon be leaving town as the organization firms up plans to relocate.

The Museum sold the 950 Trout Brook Dr. property where it has made its home since 1958 to neighboring Kingswood Oxford School in 2003, and since then has been leasing it back. The Museum has been talking about moving for the past five or six years.

The current lease expired about 18 months ago. “The lease has been up and they’ve been very patient with us,” Children’s Museum Executive Director Michael Werle said Thursday. He doesn’t know what plans Kingswood has for the property and he said they have not given the Museum a “drop dead” date, but there are many other reasons for a move, including that the current facility is not efficient, and not handicapped accessible.

“The Board found two sites, and has been working diligently to assess both,” Werle said.

One of the possible sites is the former Hartford College for Women property on Asylum Avenue across from the Connecticut Historical Society in the West End of Hartford. The other site is in West Hartford, but Werle said he is not authorized to disclose any information about that location at this time.

When UConn announced plans to vacate its West Hartford campus at Trout Brook Drive and Asylum Avenue, Werle said that the Museum had hoped to move there and had even prepared renderings of several possible designs for the campus. “We’ve tried for several years and worked closely with the Town Council and Town Plan and Zoning to see if we could locate to the UConn campus,” Werle said, but when the town decided not to purchase the property, the Museum had to rethink its plans.

“We even talked to Ideanomics, but it did not fit into their plans,” Werle said. Ideanomics announced last summer that it plans to build Fintech Village on the 58-acre former UConn campus, and officially purchased the property in October.

The timeline for choosing a new site was revealed at the Museum’s annual gala on March 14, and the goal is to make a decision within 30 to 60 days, and relocate within 18 months to two years.

“The Children’s Museum has been an asset to West Hartford and the Greater Hartford region for decades, and I hope they can either stay in town or in close proximity,” Town Manager Matt Hart said Thursday.

The Museum’s most recognizable asset will follow them to wherever they land.

“We can’t move without taking Conny,” Werle said of the Museum’s iconic statue, a life-size replica of a sperm whale. Conny – short for “Connecticut” – was built onsite by volunteers in 1975-76, and had a 40th birthday party in 2016. Any potential designs for a new site absolutely accommodate the whale, he said.

“It’s hard to find someone in this state who hasn’t had some interaction with Conny,” Werle said. He said that Board Chair Peter Stevens wants to have a parade, complete with bands, when Conny departs for the new location.

Other than Conny and the “menagerie” of animals, the Museum will be very selective in what else is moved from Trout Brook Drive, Werle said. They will be designing new exhibits, and are hoping to still include a planetarium. The Travelers Science Dome at the Gengras Planetarium at the Museum is currently the only area planetarium open to the public, and is a big draw for schoolchildren, he said.

The preschool will also “definitely go with us,” Werle said. It’s a very niche-oriented preschool, and will maintain its small size, he said.

Werle said that if the move is to the former Hartford College for Women site, which is currently owned by the University of Hartford and mostly unoccupied, it will require construction of new buildings.

Meetings have been held with the West End Neighborhood Association, and there has been support, Werle said. Hartford Mayor Luke Bronin has attended those meetings.

The West Hartford site would be a combination of renovation and new construction.

Werle said that the estimated cost of a move is $20-$25 million.

“We’ve said all along we can’t do this without state or city support,” said Werle. “That’s part of the plan.” The Children’s Museum is the only museum in the state that does not have public funding, either state or town/city, he said.

The Museum has been quietly speaking with potential supporters, and many have said that they will contribute when a site is identified, Werle said. “We’re cautiously optimistic that we’ll be able to do it.”

Following the announcement, the Children’s Museum will kick off a capital campaign, Werle said.

The Children’s Museum’s original location was in Elizabeth Park, and the organization celebrated its 90th anniversary in 2017. In addition to the Museum, wildlife sanctuary, and preschool in West Hartford, the organization owns the Roaring Brook Nature Center in Canton.