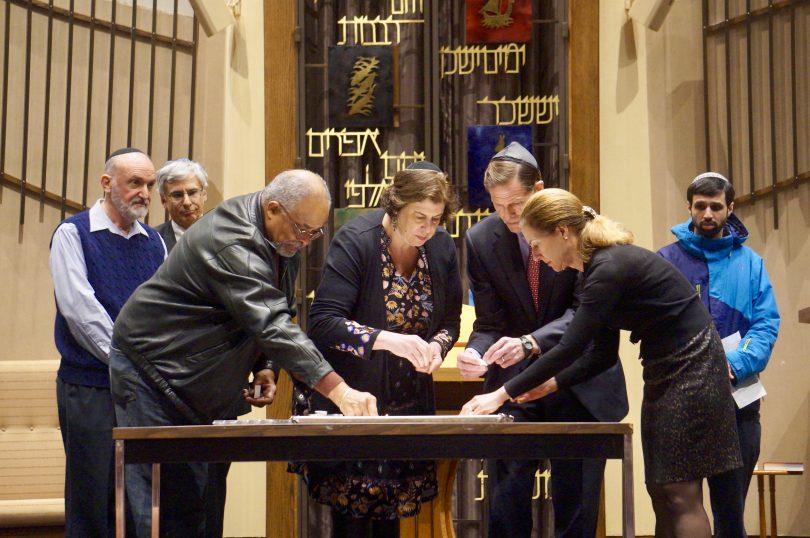 Members of the community, government officials, and faith leaders gathered at Beth El Temple in West Hartford Monday night to stand together against anti-Semitism. 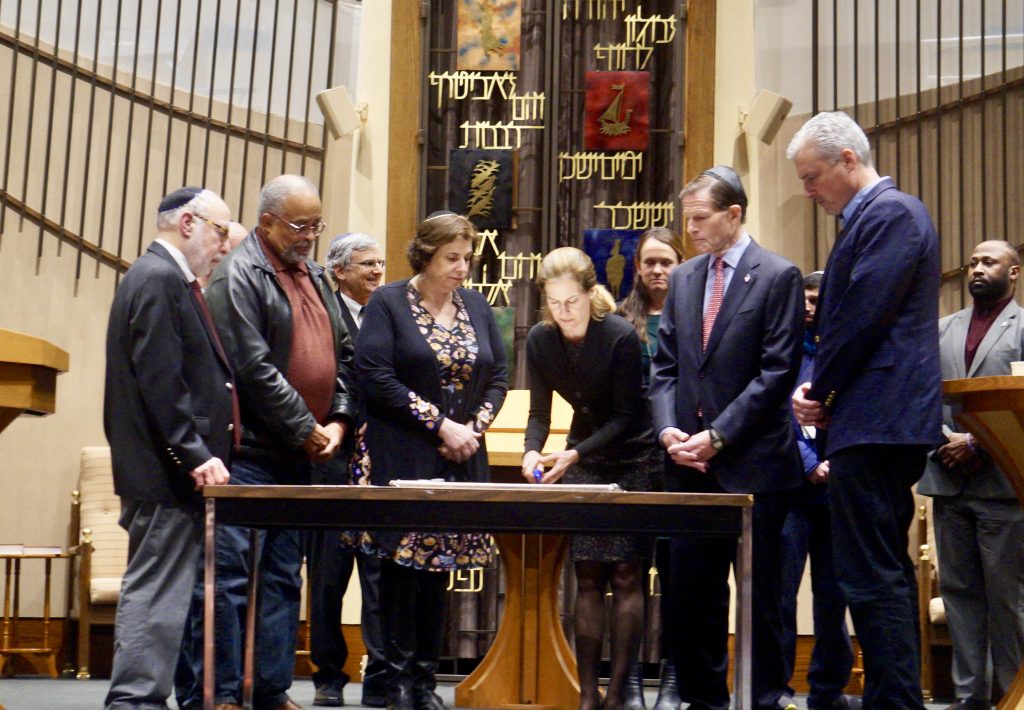 The community stood together in solidarity in West Hartford Monday night, as leaders of many different faiths joined state and local officials to speak out against hate, and to decry the latest attacks on Jews and other acts of violence as something that should never be considered the “new normal.”

As lightning flashed through the windows, thunder shook the building, and ice and snow coated the sidewalks and roadways, the apocalyptic atmosphere was evident inside Beth El Temple as well, as one speaker after another rallied several hundred community members who attended the event to take action to ensure safety and security, and to combat anti-Semitism.

“We also stand in solidarity tonight with diverse religious leaders, good friends who are joining with us in recognition that anti-Semitism is not just a Jewish problem and doesn’t just affect the Jewish community,” said David Waren, president and CEO of the Jewish Federation of Greater Hartford, which organized the rally. “People of all faiths, and all people of good will, are critical partners in combating hate and spreading light,” he said.

“The measure of a community is not whether incidents of bias occur. The measure is how that community responds,” Waren said. “Standing with these leaders, with all of you here tonight, and with the support of many others, there is no question that we have the capacity and the will to confront and overcome this resurgent virus of hate with unabashed pride, confidence, and determination.”

The rally was organized after the latest act of anti-Semitic violence – an attack on Jews celebrating Hanukkah at the home of a rabbi in Monsey, NY, on Saturday night. Five people were injured in the stabbing, and a collaborative effort of law enforcement officials led to the swift arrest of attacker Grafton Thomas, 37, who was arraigned Monday on charges that included attempted murder. 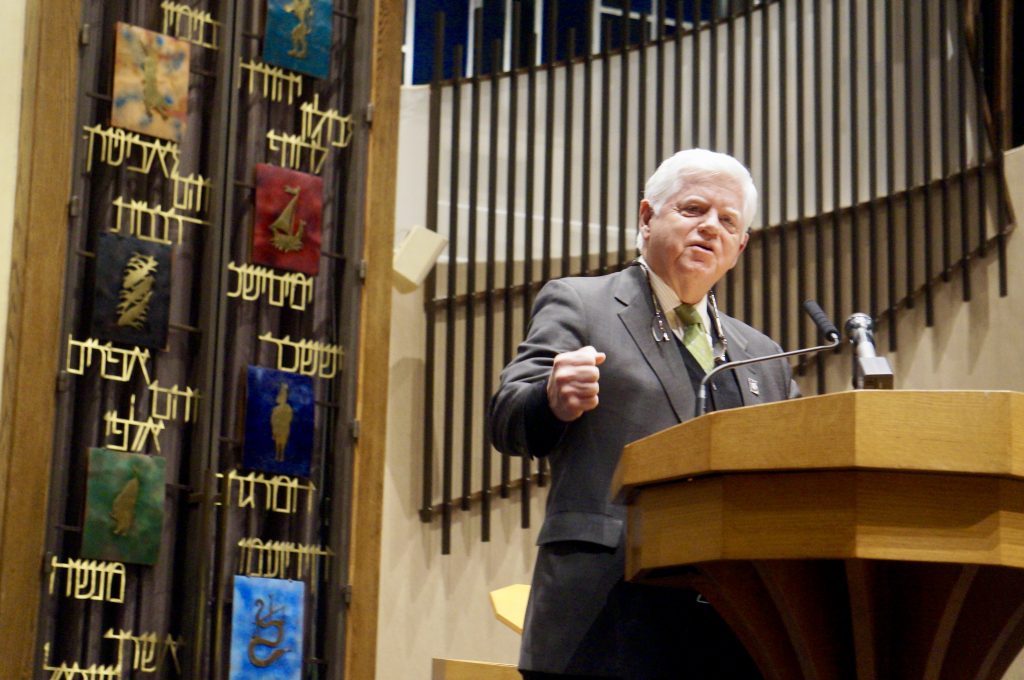 U.S. Rep. John Larson (D-1st District) said there’s a larger issue at stake, “an infrastructure problem that’s corrosive,” and the country’s motto “E pluribus unum” – “out of many, one” needs to be taught to and followed by all. “Especially at times like this we need to come together,” he said.

“Let us go forward as optimists, being able to look fear in the face, and stare it down with truth and justice. … In this great country of ours we need to come together and stand in solidarity,” Larson said, evoking words recently spoken about the “beloved community” by fellow Democratic Congressman John Lewis, a civil rights activist who was just diagnosed with stage 4 pancreatic cancer.

“Thank you all for opening your hearts. I feel like I want to hug every one of you,” said Sen. Richard Blumenthal, who spoke of feeling a deep sadness and shock at a time of year that should be focused on the beauty of Hanukkah, a holiday celebrating overcoming darkness with light. 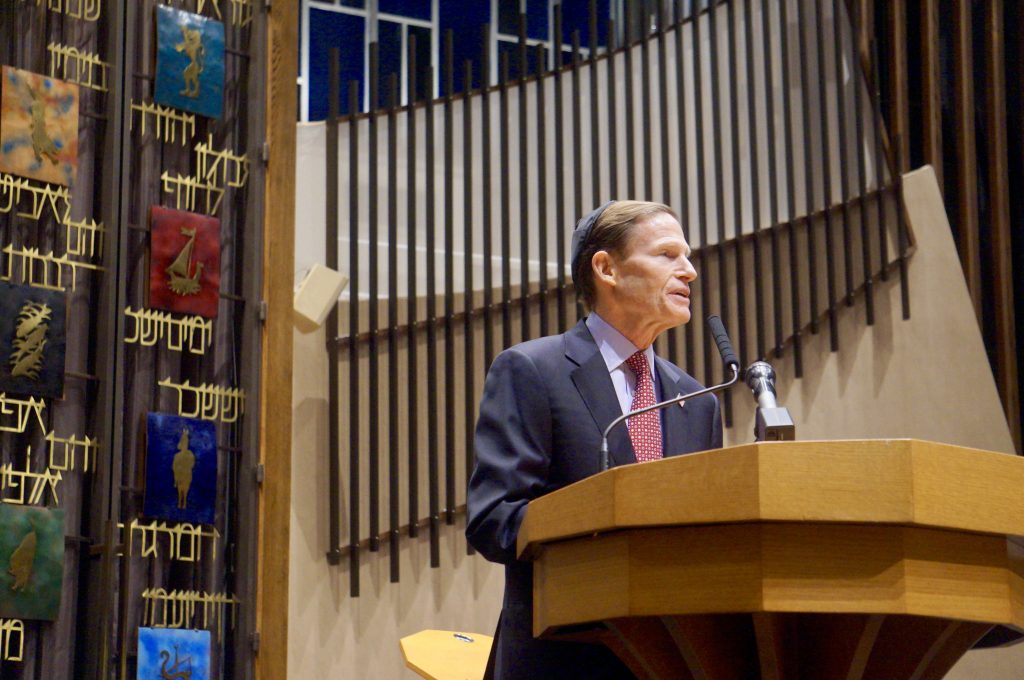 There is a surge of anti-Semitism around the country, Blumenthal said, and hatred can happen everywhere, even in the greatest country in the world.

The federal government has just approved $90 million in funding for increased security, he said, but while that can protect some people and places, “good people must come together to condemn and to move forward.”

Lt. Gov. Susan Bysiewicz said the Monsey attack was a “horrific display of anti-Semitism,” and echoing the words of other speakers said it’s up to everyone to stand together as Americans to fight the hate. 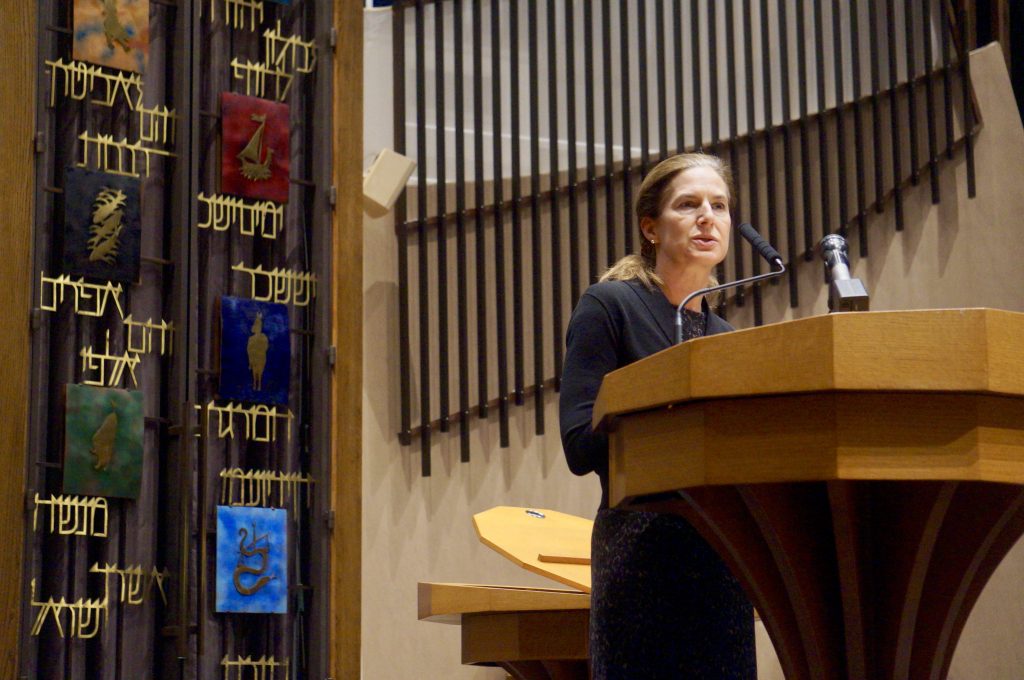 This is a teaching moment, she said, a time to teach tolerance, to teach welcoming. She said she expects the bond commission to approve funding in January to reinforce and increase security for houses of worship.

“The governor and I want you to know that hate has no home in Connecticut, that we are a welcoming state,” Bysiewicz said, a place that welcomes immigrants and people of all backgrounds. “We stand in solidarity with the Jewish community, and we thank you for your work, and we look forward to our continued collaboration to make sure our state remains an open, welcoming, and warm state.” 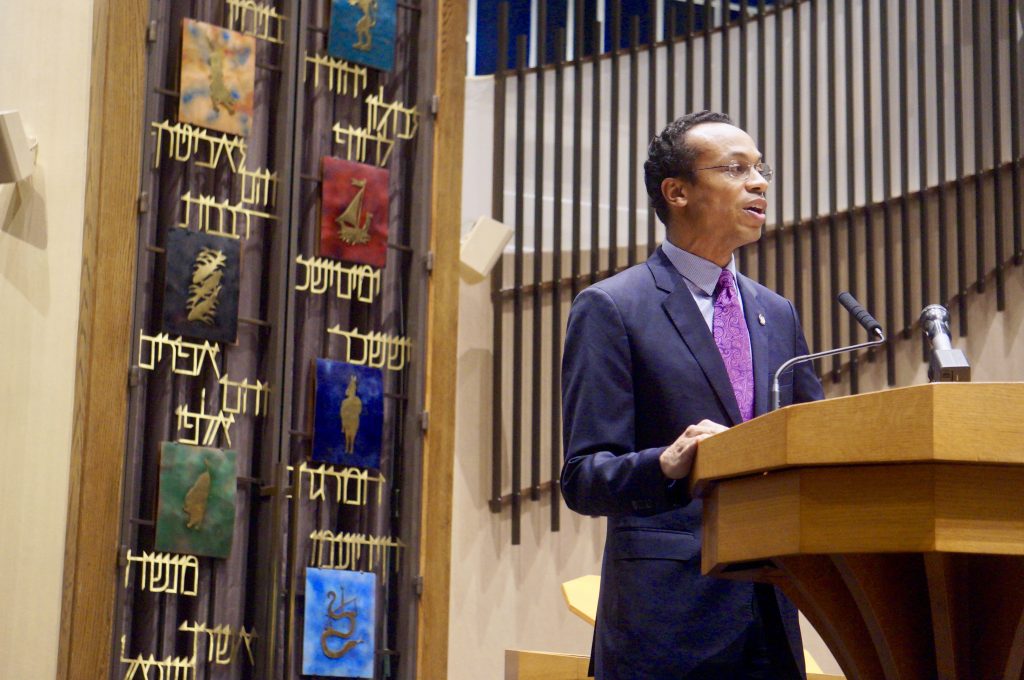 Connecticut Treasurer Shawn Wooden, who recently returned from a trip to Israel, said he stands in solidarity with his “sisters and brothers of the Jewish faith,” stating that hate has no place in this country and will not be tolerated. 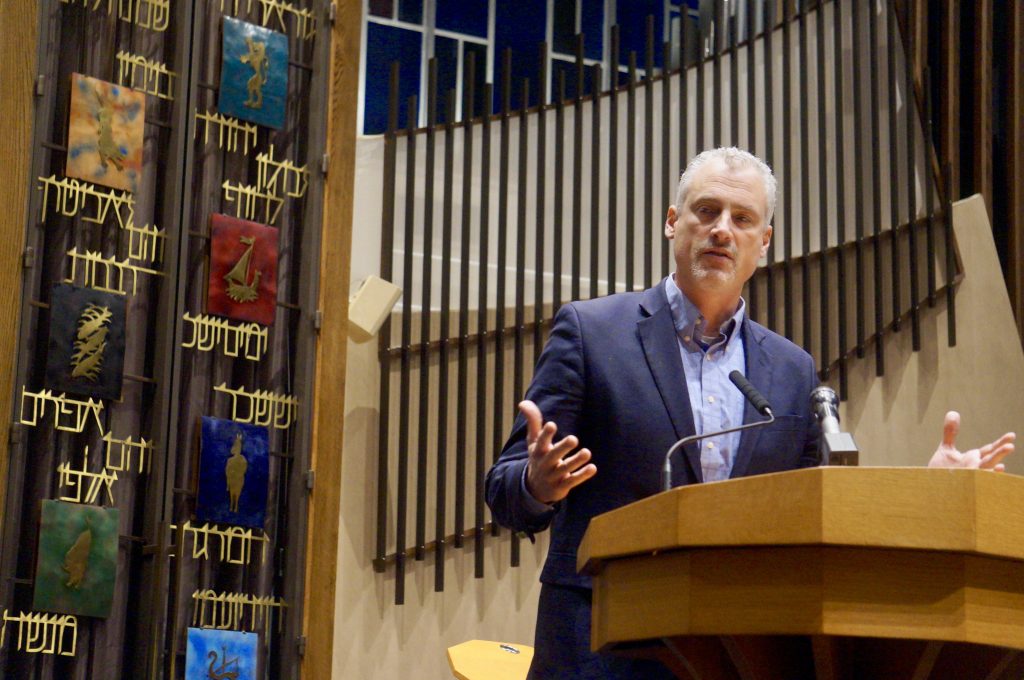 State Sen. Derek Slap said there are many ways to fight back, to “stand together and speak up,” to ensure that ignorance does not spread further.

Slap called for the passage of $5 million funding for increased security at houses of worship, a bipartisan bill he sponsored with State Sen. Saud Anwar. “This shouldn’t be a partisan issue,” he said, and it’s funding for the government’s fundamental role of protecting its citizens.

“I stand with you, shoulder to shoulder, and we’re going to work with you and effect change,” Slap said.

Anwar, who is from South Windsor, and is a Muslim, also attended the rally. 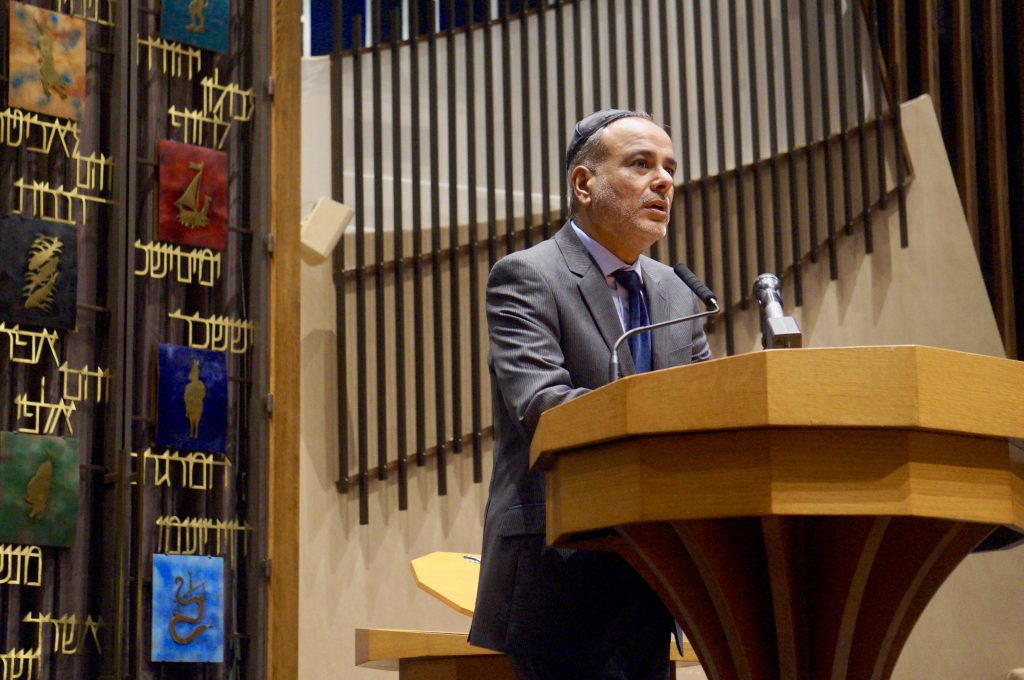 “When is enough, enough?” he asked. “What happened to the concept that sacred spaces are safe places?”

There needs to be a serious conversation and serious action taken, and the community needs to recognize that “this is not the new normal,” Anwar said. “We cannot allow the onward process of hatred becoming the new normal and say that we will adjust our lives because there is hate … the status quo is unacceptable and should be unacceptable to each one of us.”

The rabbi whose home was invaded set a great example by not allowing the attack to stop the celebration of Hanukkah, or define who the community is, said Anwar. “While we are people of various different faiths we are one family … we will stand united. We will not be on the sidelines, we will be together.” 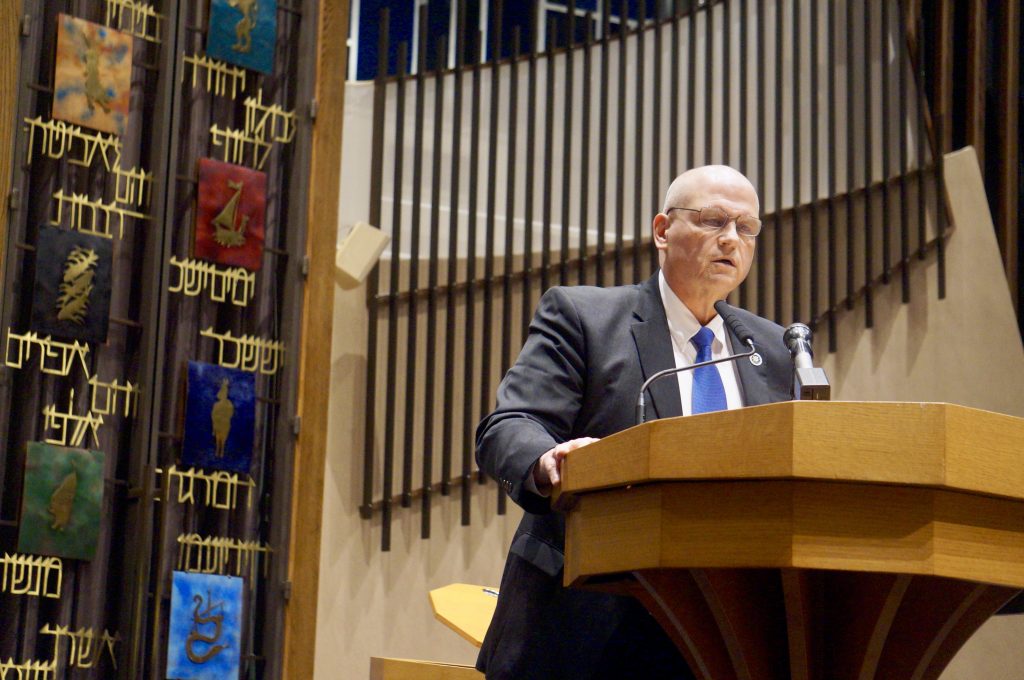 The Hanukkah lights are for a purpose, Anwar said. “We can’t let anybody extinguish those.”

Commissioner James Rovella of the Connecticut Department of Emergency Services and Public Protection said, “An attack on the Jewish community is an attack on us all.”

Rovella spoke of the collaboration between police departments throughout the state, all of which are dedicated to protecting everyone in the community. “We are here to protect and serve,” he said. 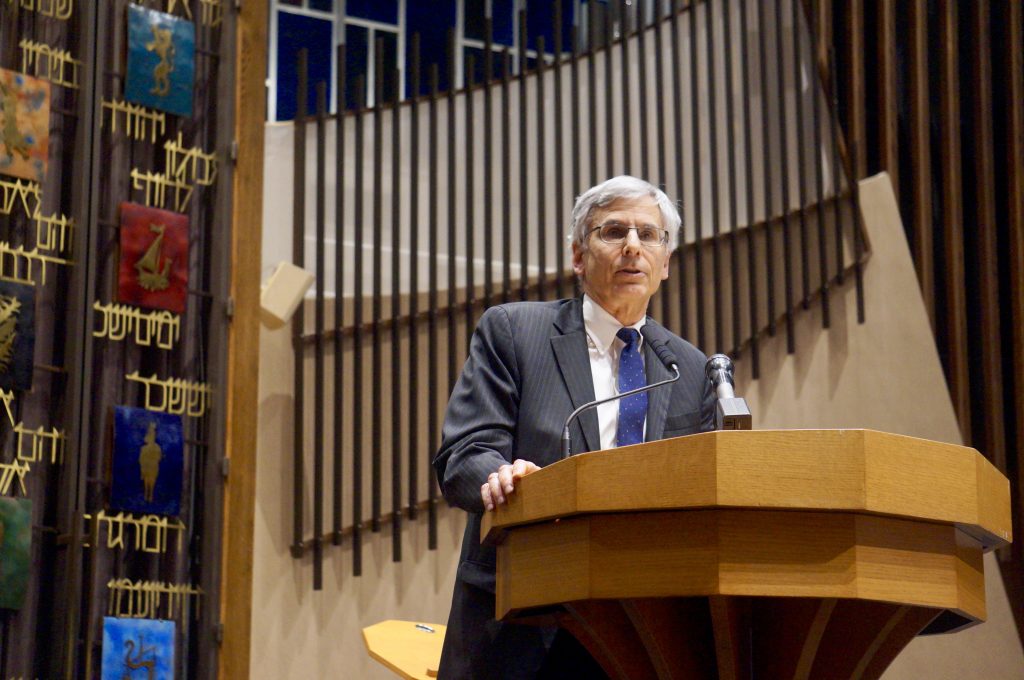 “We are always bidden to increase the light, the hope, the power of goodness,” said Rabbi Jim Rosen of Beth El Temple. “We are standard bearers of liberty … we stand for hope, for the power of the spirit of justice to counter violence, and we are grateful, so very grateful, to those who have stood shoulder to shoulder in so many places around the country and especially here at home, leaders of many different faith communities,” elected officials, and first responders.

The Most Reverend Peter A. Rosazza, Auxiliary Bishop Emeritus, represented the Archdiocese of Hartford, and shared several prayers.

Dr. Joel Lohr, president of Hartford Seminary, asked the crowd what kind of world we live in when security is needed in places of worship. 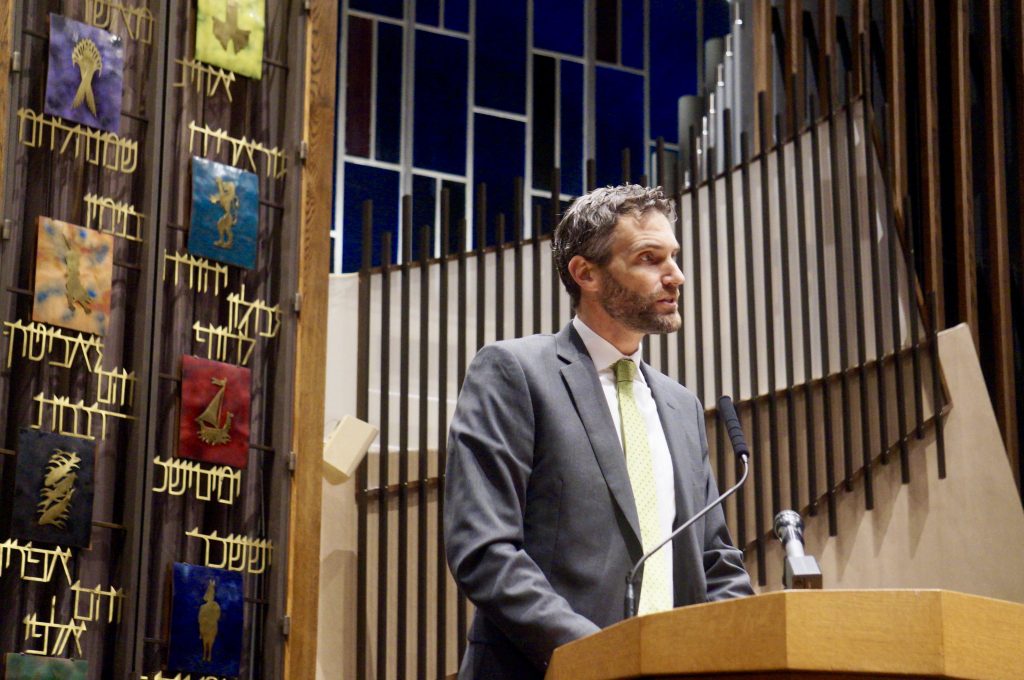 As a Christian, he said, “To my dear Jewish friends and the larger Jewish community here today … I commit to do everything in my power to stand with you, to fight anti-Semitism, and to use education to bring peace and hope to our fractured families and the world. I cannot undo the past but I can try to influence the future.”

The rally ended with prayers for healing and peace, and memorials.

The speakers, and any ordained clergy of all all faiths who were in the audience were invited to light candles at the conclusion of the ceremony.

There was a significant police presence inside and outside the synagogue, and as attendees arrived bags were carefully checked at the entrance.

“The Federation and ADL have been in touch with local law enforcement and national security experts about the security situation,” a spokesperson for the Jewish Federation of Greater Hartford said in an email. “There are no known or specific threats to the Greater Hartford Jewish community. However, in light of Saturday’s attack and the spate of recent incidents in the Greater New York region, law enforcement in Connecticut is stepping up patrols and vigilance around Jewish institutions.” 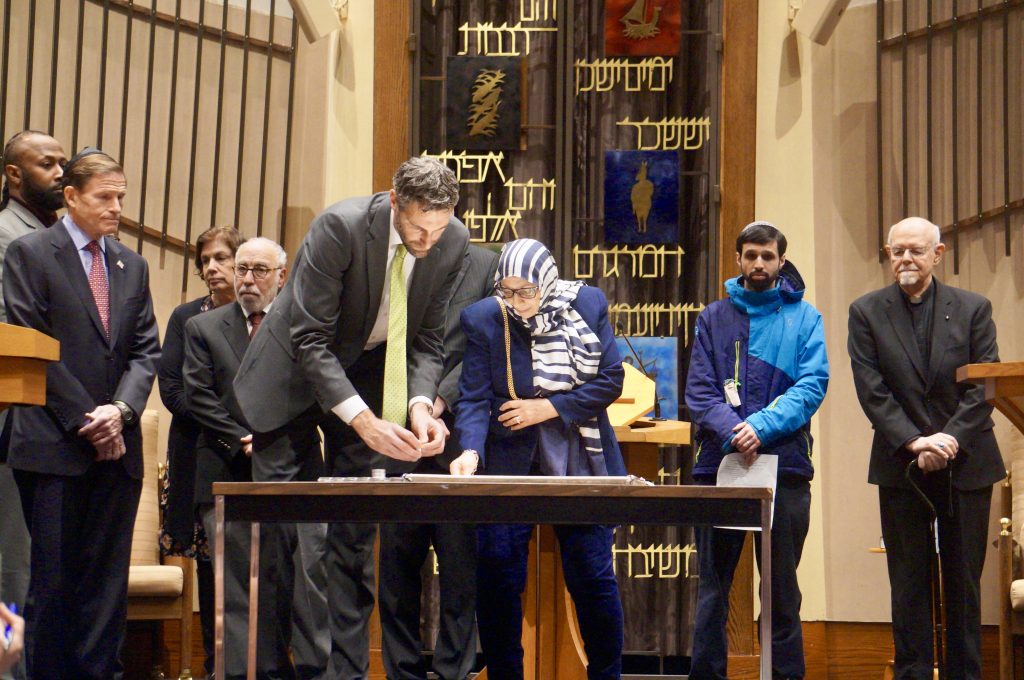 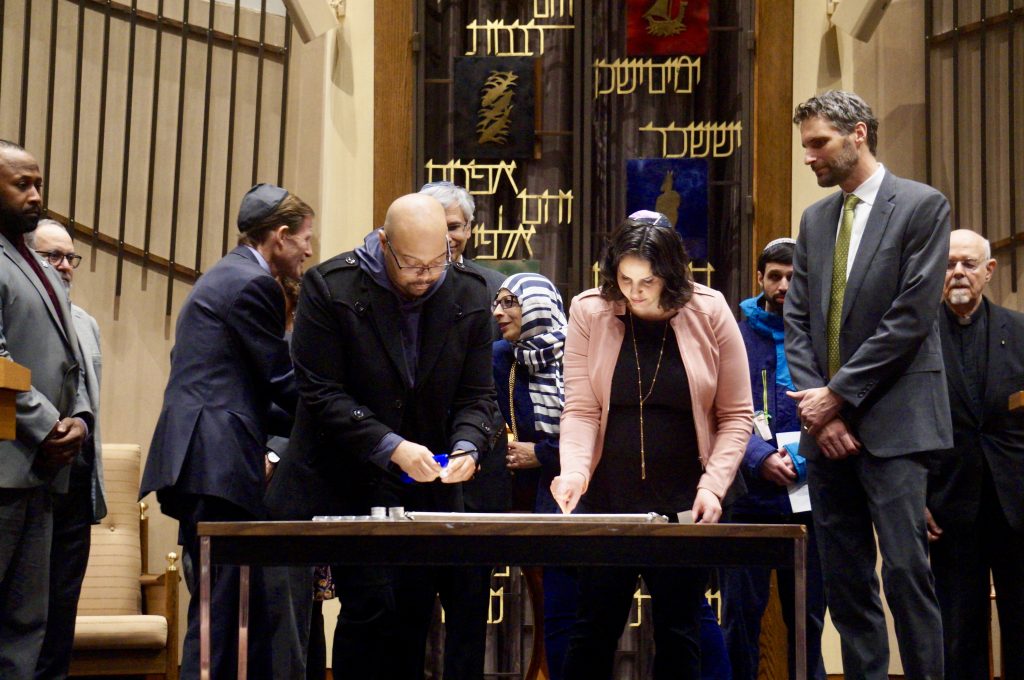 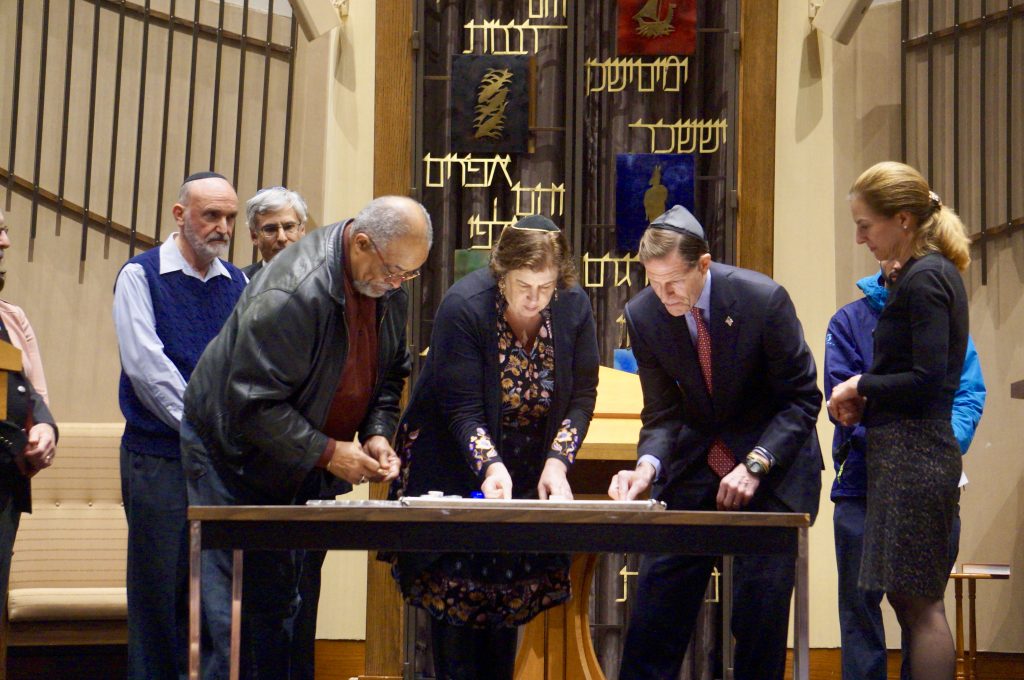 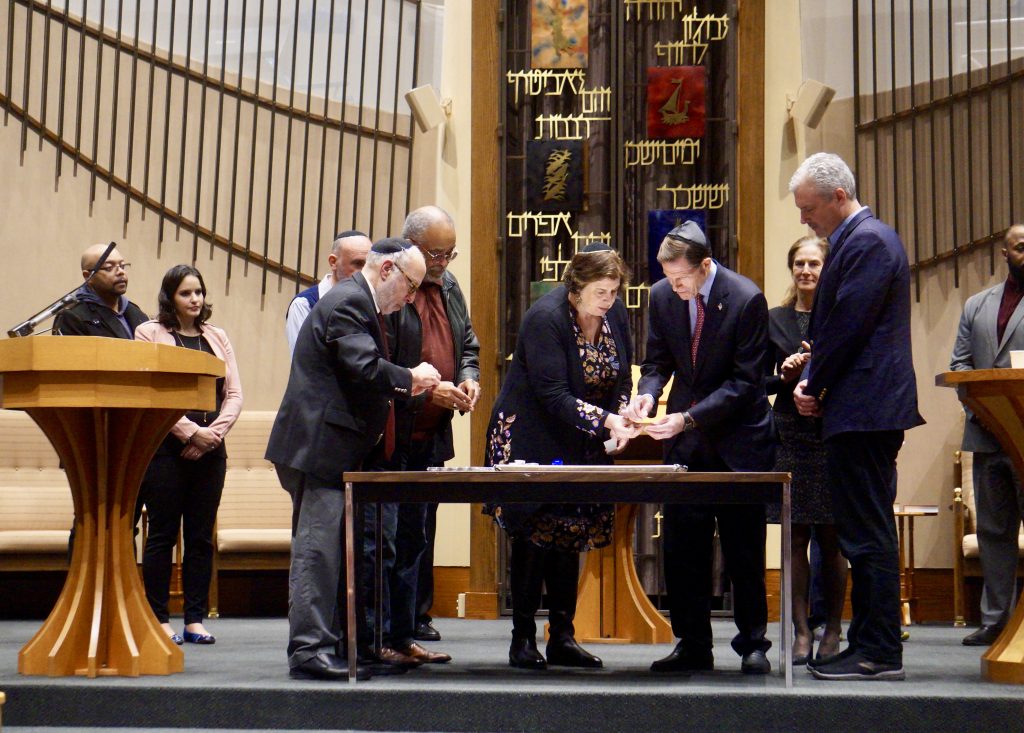 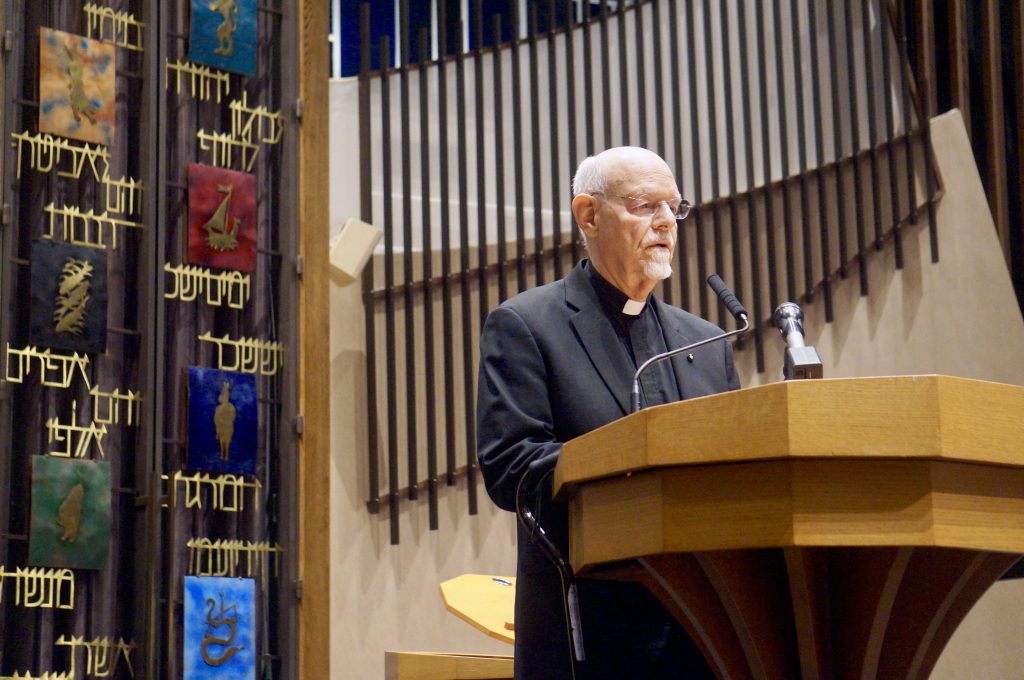