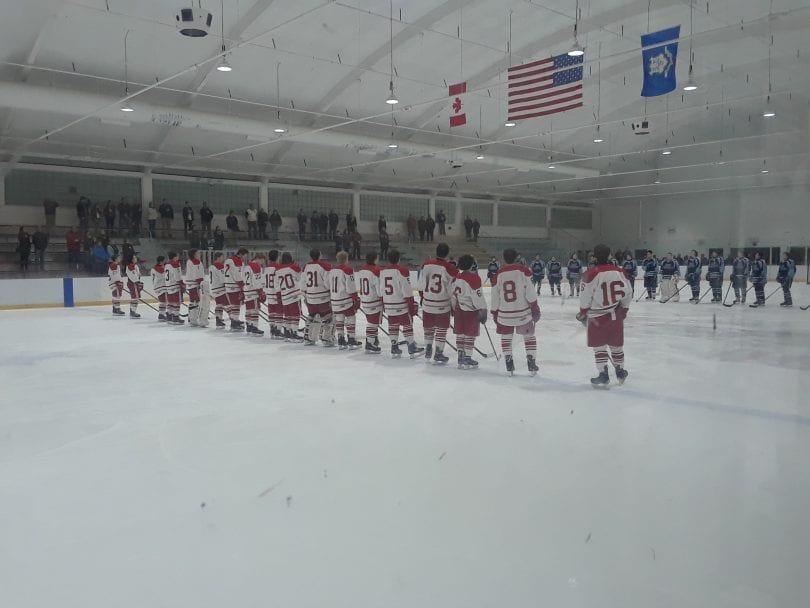 The Chieftains finish the season 11-8-1 and will be the 2-seed in the CCC North Tournament. They will host 3-seed Northwest Catholic, who they have faced twice this season, in the semifinal round at Veterans Memorial Rink on Thursday night at 7 p.m.

The team has also clinched the 3-seed in the CIAC Division II state tournament, making the season a success for Conard head coach Chris  Tornaquindici to this point.

“Whatever happens next, this season been a tremendous success,” he said. “Our guys have learned how to work hard as a team, and that’s where we’re at.”

While Starr scored three points in the contest, Chris Tornaquindici said the team’s play this year has been largely a team effort.

“We have won games playing as a team,” he said. “Every game, it’s a team effort right down from our goaltending all the way down to our captains.”

The Chieftains struck first on a goal from Owen Fernandez with 6:16 left in the second period. Starr and Liam Lacroix assisted on Fernandez’s tally.

Until then, Conard chased opportunistic scoring chances – including while down a skater on the penalty kill – but was unable to convert.

Opportunities to add to their lead while shorthanded abounded for the Chieftains, including a breakaway by Brent Soucy that the Eagles thwarted with about 3:30 remaining.

Minutes later, Soucy would not be denied as he placed a snapshot to the top-right corner of the net to put Conard up 2-0 with 1:18 left in the second period.

“[Soucy is] not our best player, but he’s kinda the guy that keeps everybody going around him,” said Tornaquindici. “I can put him on the ice in any situation. He’s, by far, been the glue to our team.”

Starr sealed the victory with a tally of his own with 3:29 remaining in the third period – assisted by Cole Johnson and Owen Hyland – to give the Chieftains a 3-0 lead.

Conard went 4-for-4 on the penalty kill, which included a five-minute major for hitting from behind in the first period.

“Unfortunately, we had to lay off playing the body a little bit,” said Tornaquindici. “We are trying to stay out of the penalty box, trying to execute our game plan, but … I don’t think [the ice] ever really tilted. We played well enough to win. I think we were a touch flat, and I think it’s human nature to look forward to tomorrow, but we were lucky to get out of here [with a win].”

All of the players on the Conard team wore no. 9 on their helmets Wednesday night, and posted on Twitter that they will continue to wear that number for the remainder of the season to honor Drew Booth, no. 9 on Hall-Southington team, who is recovering from serious injuries.

The Conard community & boys hockey team are happy to hear Drew Booth is doing well and has begun his recovery process. Tonight, & for the rest of the season, the Chieftains will wear the #9 to honor Drew. You are in our thoughts & prayers, we wish you the best of luck. #Prayfor9 pic.twitter.com/CoM1mSPWdh