Posing beneath a rainbow that appeared as the game ended, Conard celebrates its Mayor's Cup victory. Conard vs. Hall baseball May 20, 2019. Photo credit: Ronni Newton

Conard Pitcher Matt Beazoglou gave up just two runs in seven innings to earn the win for the Chieftains.

Playing in the rain at Fiondella Field at the University of Hartford Monday, Conard, fueled by an outstanding outing from pitcher Matt Beazoglou, defeated West Hartford crosstown rival Hall by a score of 5-2.

As the rain ended and a rainbow appeared in the sky, Conard was presented with the Mayor’s Cup which the Chieftains have earned in four of the last five years.

With the sweep of Hall, Conard improved to 12-7 on the year and will finish the regular season Tuesday against Southington. The Chieftains will be taking part in the state tournament while Hall’s Warriors, who fell to 5-14 with the loss, will face Northwest Catholic on Wednesday but will not make the state tournament.

The script could not have been any more different than the last time Conard’s Matt Beazoglou and Hall’s Griffin Van Rye took the mound against each other.

In the series opener on May 1, Conard’s 11-9 victory, featuring the same two pitchers, was a crazy, high-scoring affair. In the Mayor’s Cup, however, pitching was the name of the game and Beazoglou was impeccable, giving up just two runs over the course of a seven inning complete game.

Hall’s batters were, for the most part, stymied by Beazoglou’s approach, a heavy diet of breaking pitches that kept Hall’s lineup off balance. Through the first five innings he surrendered just two hits, helping to preserve what at that point was a 5-0 advantage. Beazoglou finished with five strikeouts and just one walk, and Conard manager Sanjay Rambhia was effusive in his praise of Beazoglou’s control following the game.

“He just pumps the zone with strikes,” said Rambhia when asked about Beazoglou’s performance. “He gives our team not only the confidence, but also the execution,” concluded Conard’s manager.

With the win, Conard improves to 8-0 in games Beazoglou has started. He will be the starting pitcher when Conard begins state tournament play next Tuesday.

That’s not to say Beazoglou won this game on his own. In fact, by the time he threw his first pitch, the Chieftains already led 3-0, courtesy of a fierce first-inning rally.

Jeff LaRosa, an Old Dominion baseball commit, opened up the game with a single to right field. Hall pitcher Griffin Van Rye quickly recorded an out, but surrendered a walk to Ryan Farley to put men on first and second. Conard senior Dylan Mallinson followed with a single, and just like that, Conard led one to nothing. 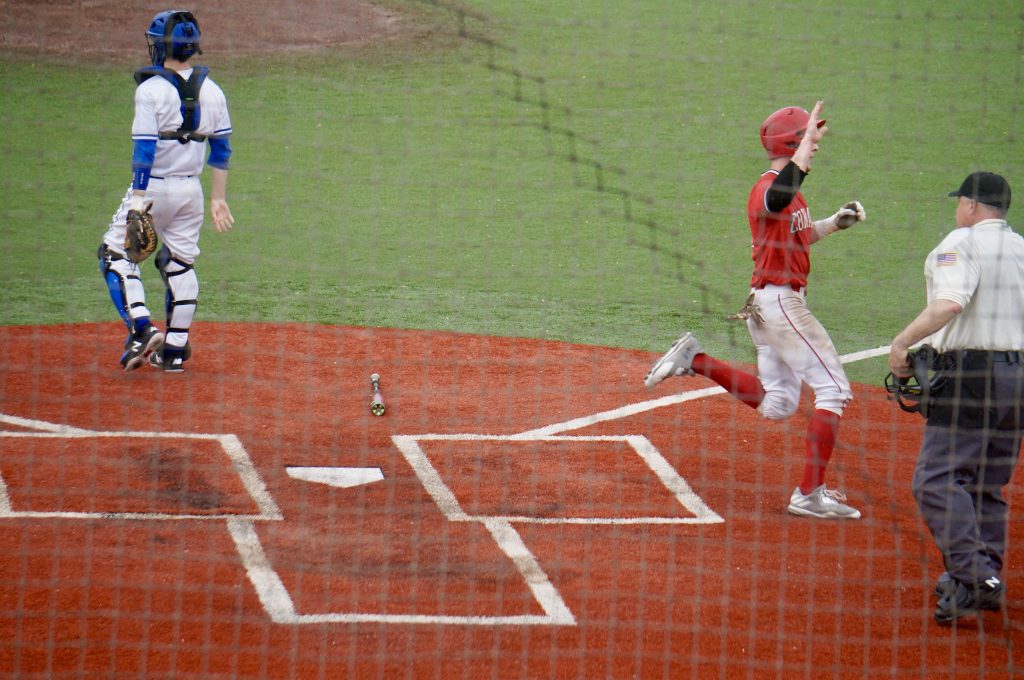 Van Rye, the Hall starter, struggled with his command in the first inning, and allowed Farley and Mallinson to advance on a wild pitch. That put runners on second and third, and Conard’s next batter, Emmett Coco, drove in Farley on a groundout to the second baseman.

With runners on the corners, Van Rye had a chance to work out of the jam, but instead gave up a balk, allowing a third Conard batter across home plate. That would be the final run scored in the inning, but the damage was done, and Hall was down three before even having a chance to swing the bat.

“One of the things we did wrong, we were just trying to do much. We’re preaching chip away, and I think guys were trying to get it all back at once,” said Marsh when asked about the response to Conard’s early lead.

Initially, it looked like that aggressive approach would pay off for Hall. Will Fox led off the Warriors with a single up the middle, and Luke Stone walked in the next at bat, leaving Hall with runners on first and second and nobody out. Beazoglou quickly regained control, however, retiring the heart of Hall’s lineup, Bryan Renker, Zach Ellovich, and Leo Dionicio, in order.

After that initial scare, Hall rarely threatened Beazoglou. They came closest in the bottom of the second, when Dan Hussey doubled to left field with one out. Hussey was thrown out trying to steal third, however, and the rally was over.

Conard scratched runs in the top of the third and the top of the fifth, giving the Chieftains a 5-0 lead. It was then when Beazoglou started to tire, and Hall attempted to work its way back into the game.

With the game on the line, Leo Dionicio led off the inning by crushing a triple to left centerfield, energizing the Hall dugout and giving the team a lifeline. Van Rye singled in the next at bat, scoring Dionicio.

In a crucial moment, Beazoglou gave up a hard hit ground ball to Hussey. Unfortunately for the Warriors, that ground ball was a tailor-made double play ball, and Sean Guevarra, Emmett Coco, and LaRosa turned a 4-6-3 to effectively end the game.

“We’ve turned about 12 double plays this year, and none was more crucial than that one,” said Rambhia.

When asked about his approach in the seventh inning, Beazoglou said “I knew I was getting tired … so I just zoned in and tried to throw strikes.”

Conard will play a state tournament game next Tuesday, and they’ll look to ride the momentum from the Mayor’s Cup into its elimination game. “It’s a huge morale boost. Definitely going into the state tournament we needed this win, and I’m really happy with my group of guys,” said Beazoglou on the game’s effect on Conard’s approach to the tournament.

Although Conard came into the game with more wins, that doesn’t always matter when the crosstown rivals play. When asked about the game’s significance, Rambhia said, “It doesn’t matter what the records are. It’s like an Army-Navy game.”

The next edition of the rivalry will have to wait until next year. Until then, Conard will cherish its Mayor’s Cup trophy. 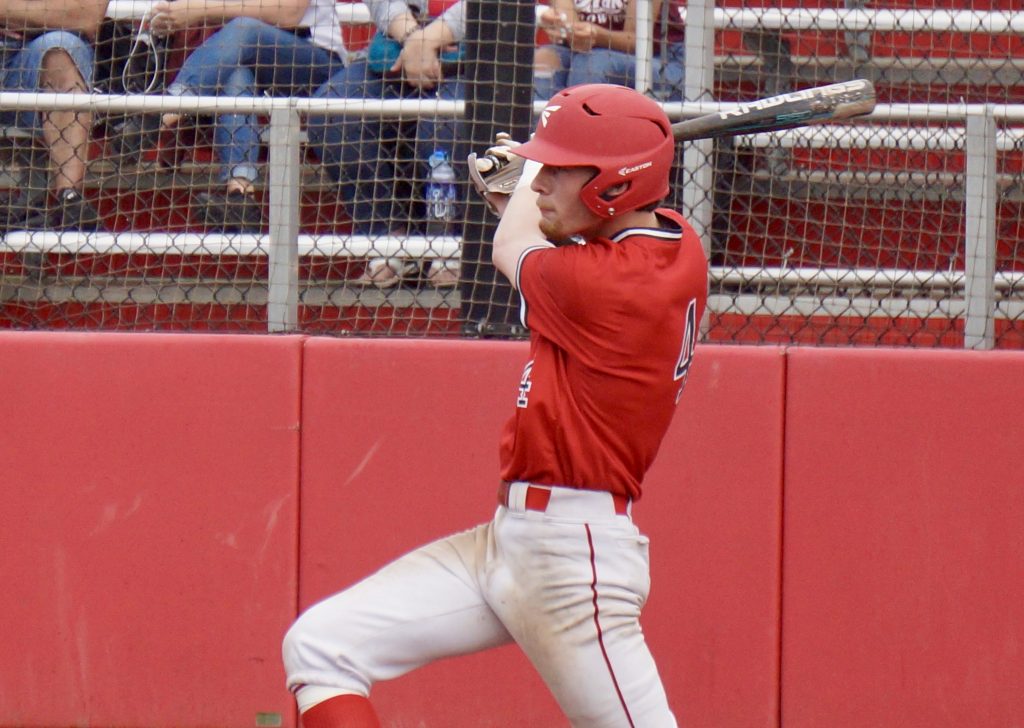 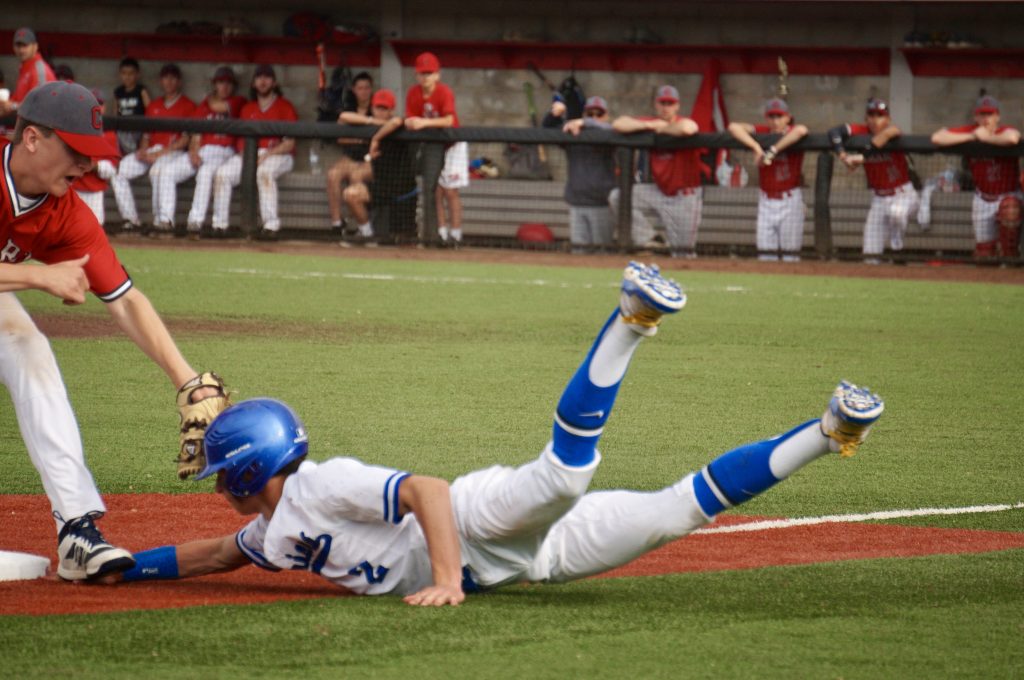 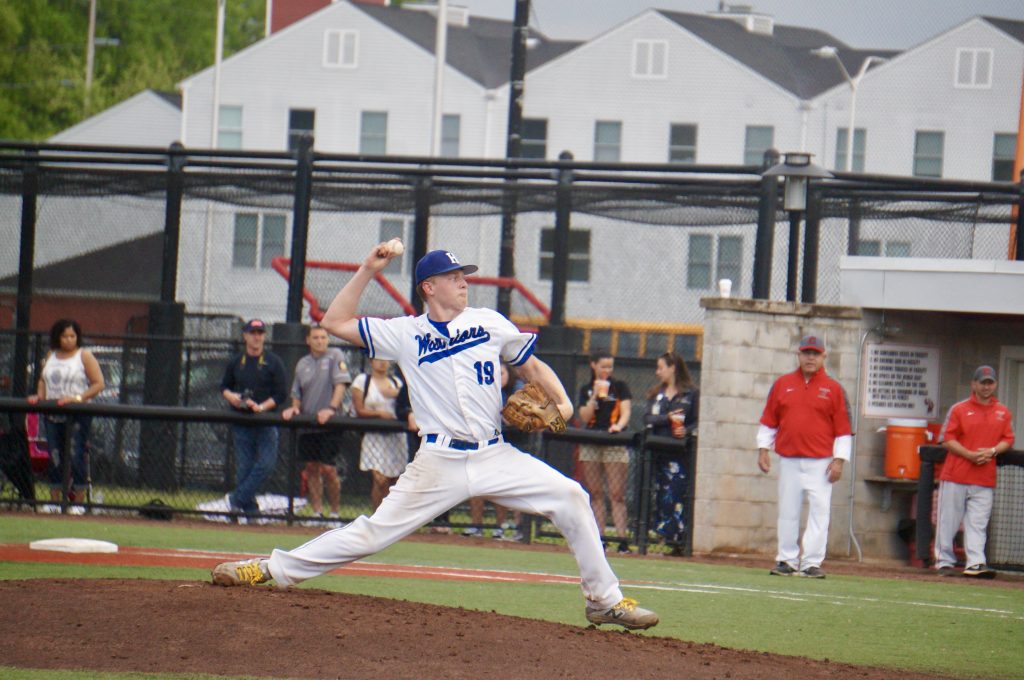 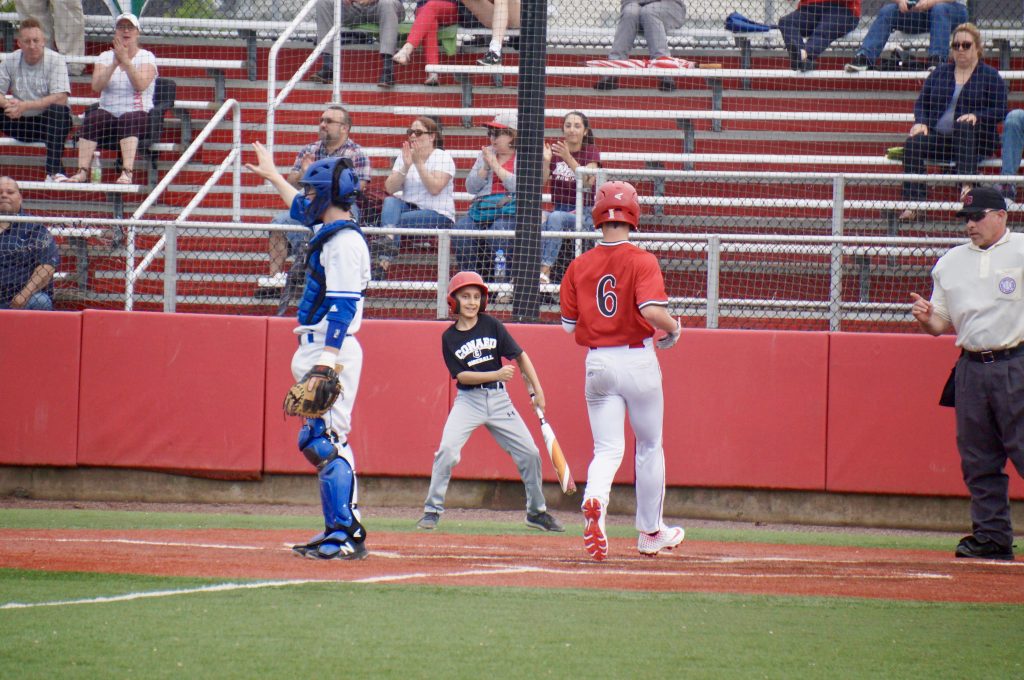 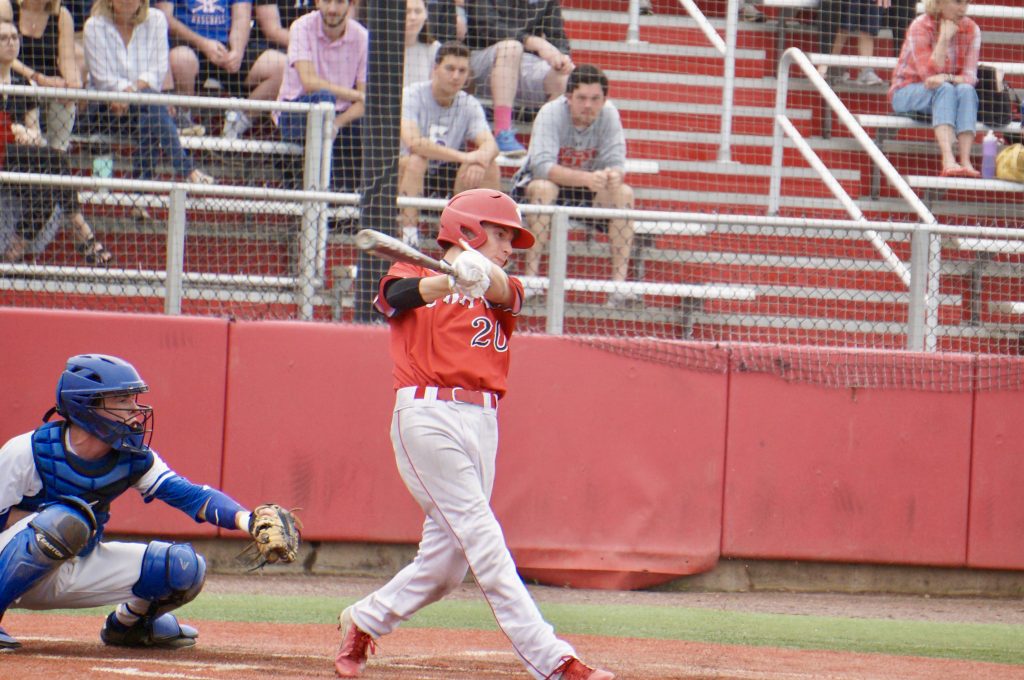 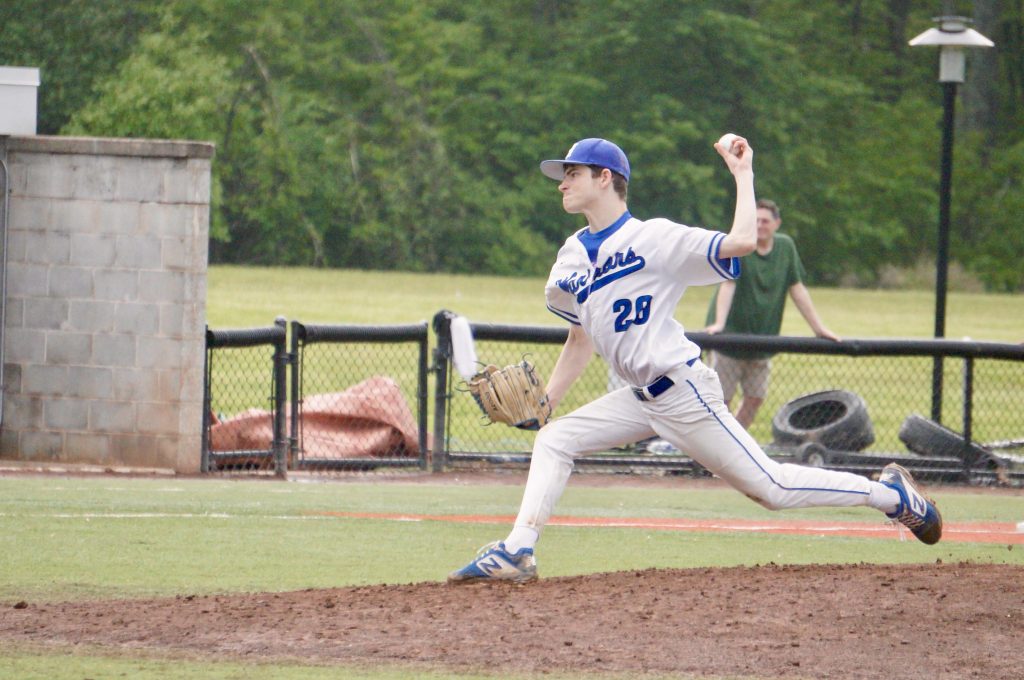 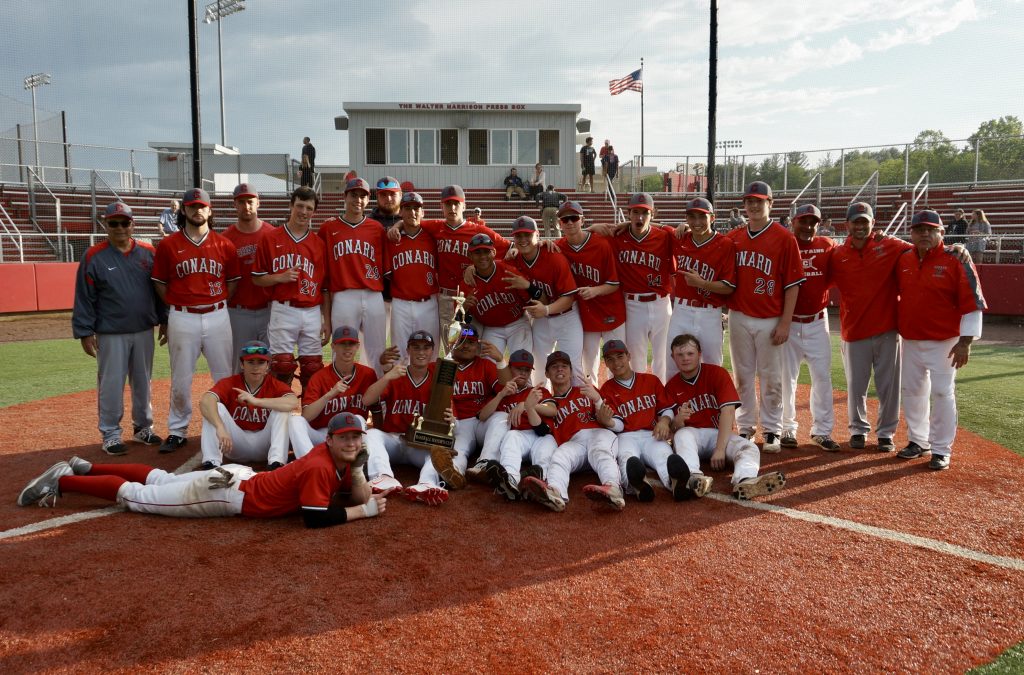 The Conard team poses at home plate with the Mayor’s Cup. Conard vs. Hall baseball May 20, 2019. Photo credit: Ronni Newton 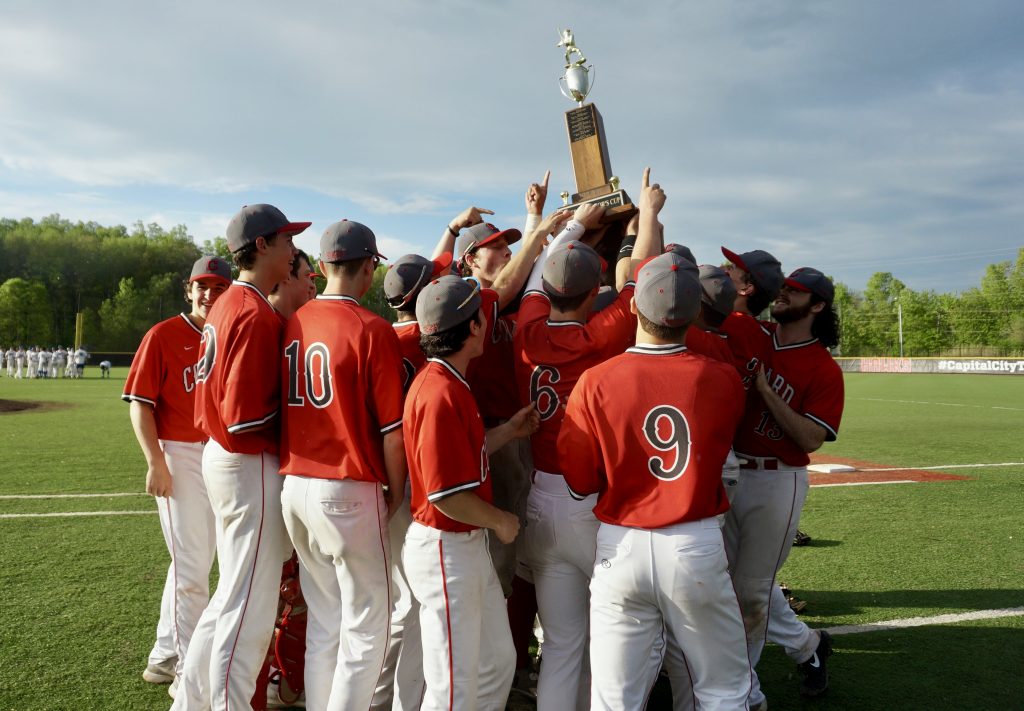