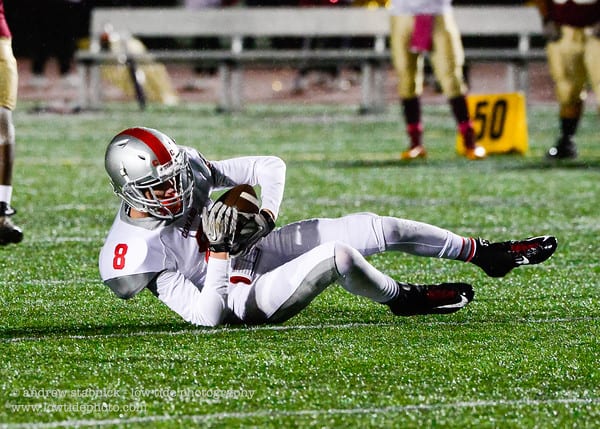 The Conard High School varsity football game vs. Southington on Friday, Oct. 23, will be a fundraiser in honor of Kim Green, mother of Conard senior football player Torrie Green.

Sports teams throughout the country have jumped on the bandwagon of raising awareness and money for breast cancer during the month of October, but at West Hartford’s Conard High School, the effort is much more personal.

Senior Torrie Green, a wide receiver on Conard’s varsity football team, has watched his mother battle breast cancer for his entire life. Kim Green was first diagnosed with the disease in 1998, while she was pregnant with Torrie. Her cancer was then stage 2, but after several recurrences is now metastatic, stage 4.

On Friday, Oct. 23, at 7 p.m., the Conard Chieftains football team will host the Southington Blue Knights at McKee Stadium. They are hoping everyone who attends will “Go Pink for the Greens.”

“The football staff decided that they wanted to do something regarding breast cancer, and Torrie’s mother’s battle came to my attention,” said Conard head coach Matt Cersosimo. He said he got in touch with Kim Green to make sure she was okay with it. “She was really appreciative,” Cersosimo said. 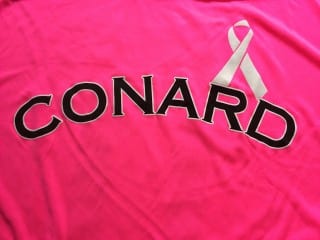 Conard will ‘Go Pink for the Greens’ at the football game on Friday, Oct. 23. Photo credit: Ronni Newton

The team will be asking for donations at the gate where people purchase their tickets, and team members and youth football players will also be collecting in the stands. The Conard cheerleaders will be donating half of their 50/50 raffle to the Greens, Cersosimo said, and the student council will have a donation jar at the concession stand.

The “awareness” part should result in a sea of pink and green in the Conard grandstand. Fans are being asked to wear either pink or green, and a green or pink towel is being given to the first 75 students who arrive. Cersosimo said to imagine it’s a Pittsburgh Steelers “terrible towel.”

Green towels have also been purchased for all of the football players.

“We are are so humbled and grateful,” Kim said.

She plans to be on the sidelines watching Torrie play, but it’s only the second game she has been able to attend following a lengthy hospitalization when she acquired MRSA after abdominal surgery. Friends have set up a GoFundMe campaign to help the Greens with their medical expenses.

Friday’s game will be a huge one also because of the opponent. “Every game in this conference is a huge one, but this game in particular,” Cersosimo said.  “Southington hasn’t won 25 game in a row for nothing,” Cersosimo said of the unbeaten Blue Knights, currently the number one team in the state. He said Conard has been working extra hard in preparation.