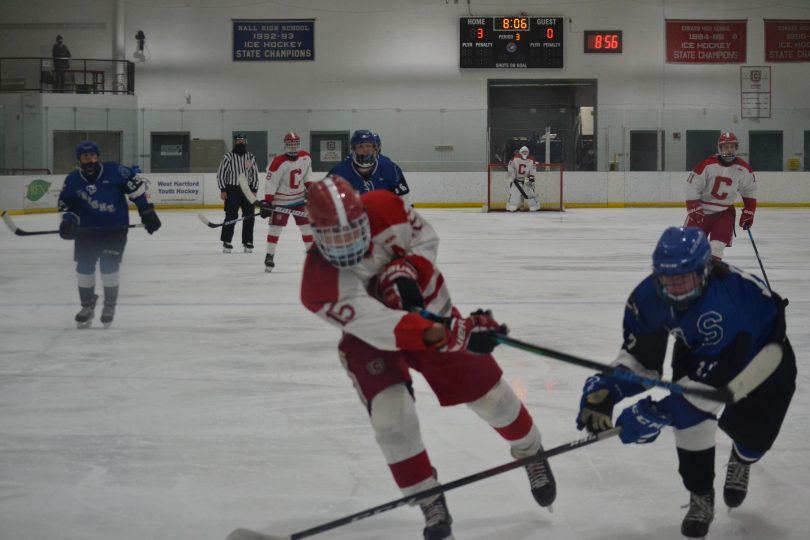 Jack Wenz follows through on his shot. On Monday he scored twice in the Chieftains' win. Conard vs. SCW boys hockey. Jan. 3, 2022. Photo credit: Paul Palmer 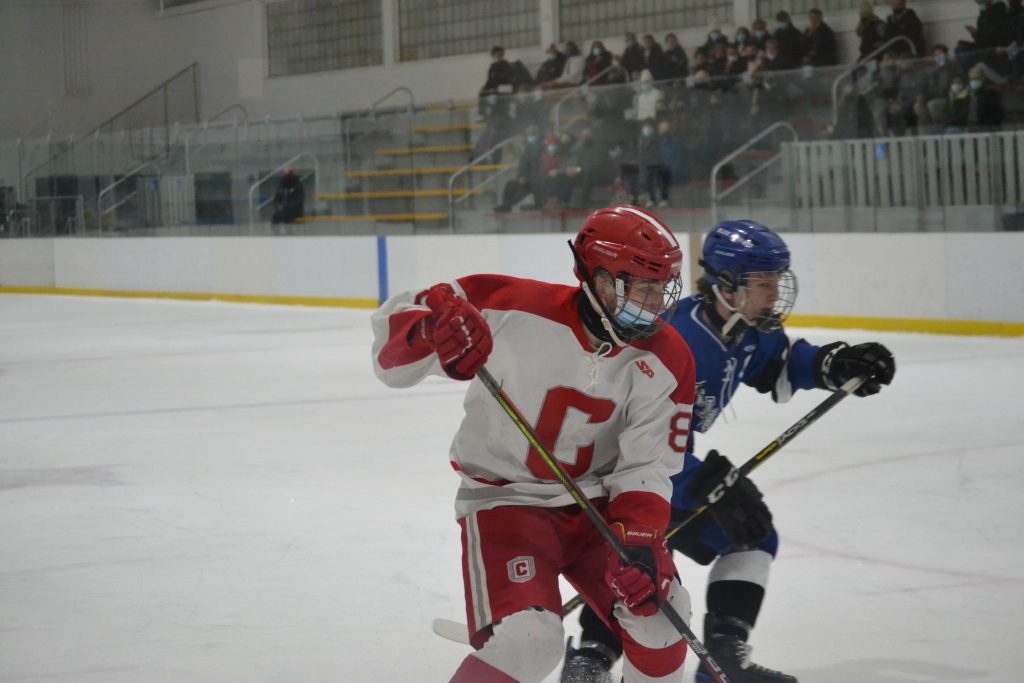 Conard’s boys’ hockey team got back to its winning ways Monday night with a workman-like 3-0 home win over Southington-Coginchaug-Westbrook at Veterans Ice Rink in West Hartford.

Both squads were coming in off shutout losses, and the Blue Knights had yet to score a goal on the season.

The host Chieftains would score the game’s first goal just under six minutes into the first period. Senior center Jack Wenz snapped off a wrist shot from just inside the left circle that beat SCW goalie Max Scirocco. Nolan Trent and Nick Paolitto picked up the assists on the goal. 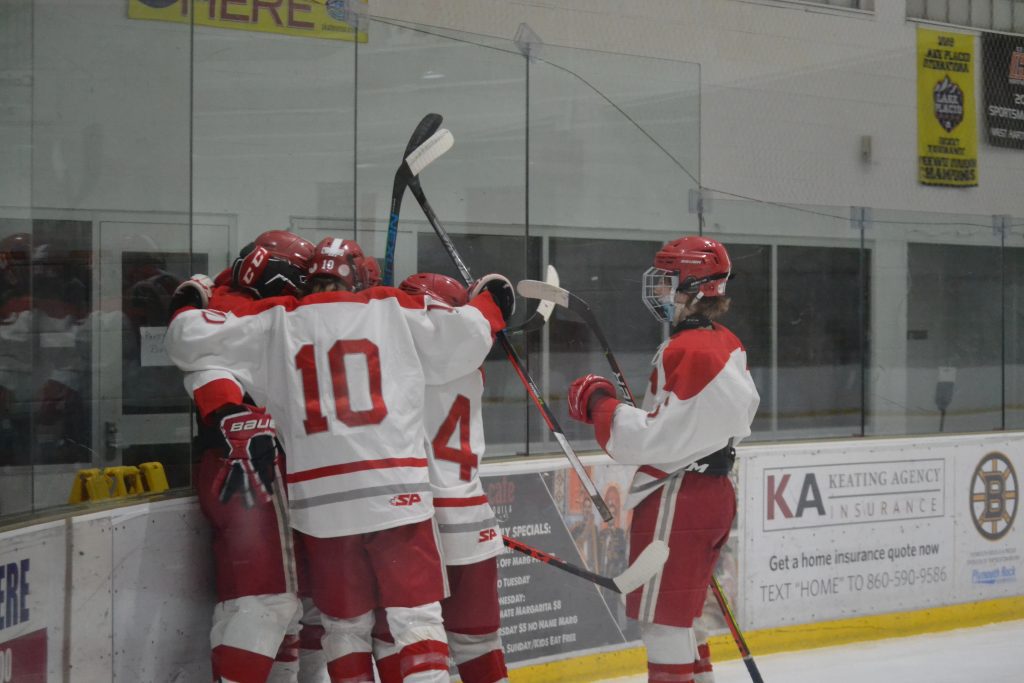 Trent and Wenz were at it again about four and a half minutes later, but Scirocco was up to the task, stopping Wenz.

SCW found its stride in the late part of the first period, starting with Colin Paradis firing a low, hard slapshot from the blue line that Conard goalie Graydon Selstad turned away. Moments later it was Tom Czarkosky making the bid for the Blue Knights’ first of the season and game, but once again Selstad was equal to the effort.

The opening 15 minutes were marked by some good, clean hits from both clubs. SCW’s Noah Wilk  and Austin Pszczolkowski were especially strong along the blue line, using their size and strength to shut down Conard’s efforts.

In the second period, the Chieftains put things away with a dominant period of play that started with a goal just 31 seconds into play. Once again it was  Wenz who found a loose puck in front of the goal and deposited it for the 2-0 lead.

The second period was playing out much like the first, with both teams getting their chances on net, and both teams absorbing and dishing out big hits. A scary moment came a little over halfway into the period when SCW’s Michael Fusciello collided with Paolitto as the Conard defenseman was clearing the puck from his zone. The force of the collision sent Fusciello backwards onto the ice where the back of his helmet hit the ice hard. He would be helped off the ice and put through concussion protocols, and did not return to the game. 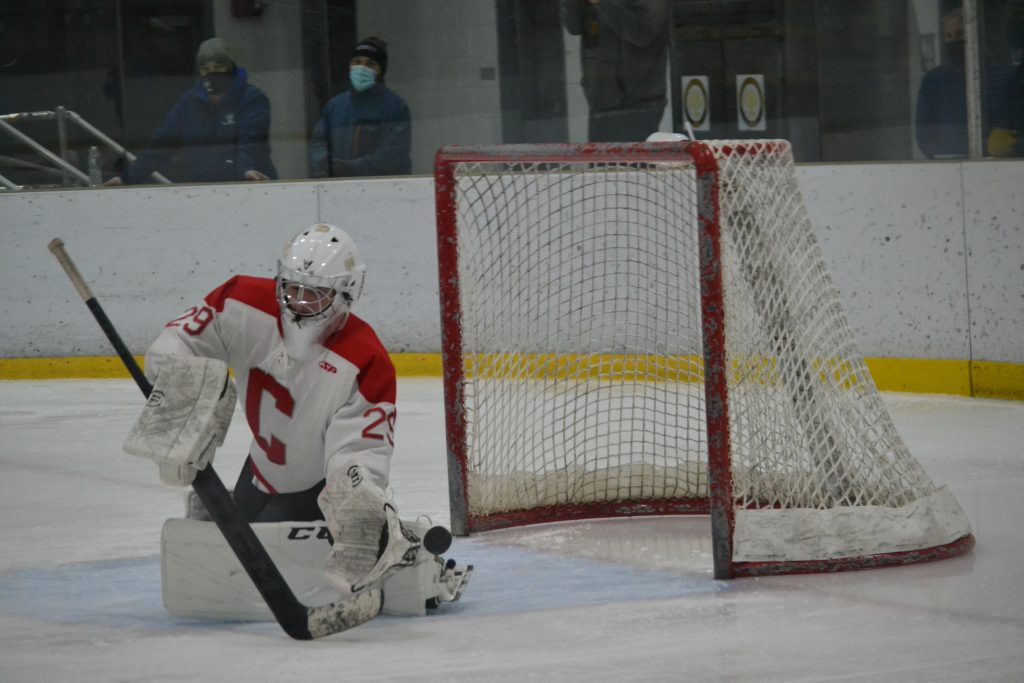 Scirocco’s play kept his team in the game as he made several big saves in the middle period. After three big saves, his best may have come when Jack Hodgson made a strong backhand to forehand move to gain space in front of the net before letting his shot go. But Scirocco was able to blocker the shot away and keep it a 2-goal game.

With just 44 seconds left to play in the period, however, senior left wing Sam Heller would score off a scramble from the left side of the net to make it a 3-0 Conard lead.

The second period was Conard’s best of the game. They played a strong possession game, setting up good scoring chances and getting good goalie play from Selstad when needed. Over the final 20 minutes, neither team managed to control the puck with any regularity. Both spent time dumping and chasing with each team getting occasional chances on goal.

With 1:45 to play in the game, SCW was given its best chance to finally get on the scoreboard when Conard’s James Robinson was called for cross checking off a scrum along the boards. After calling a timeout, the Blue Knights pulled Sciorcco in favor of another attacker and a 6-on-4 advantage. The move almost paid immediate dividends as a loose puck slid past an attackers stick in front of an open net. Wenz nearly got his third goal, but a diving, sliding effort by a defender knocked the puck to the corner as Wenz was about to deposit it into the empty net.

Conard moves to 2-2-1 on the season, while Southington-Cognchaug-Westbrook falls to 0-3 in its inaugural season as a co-op.