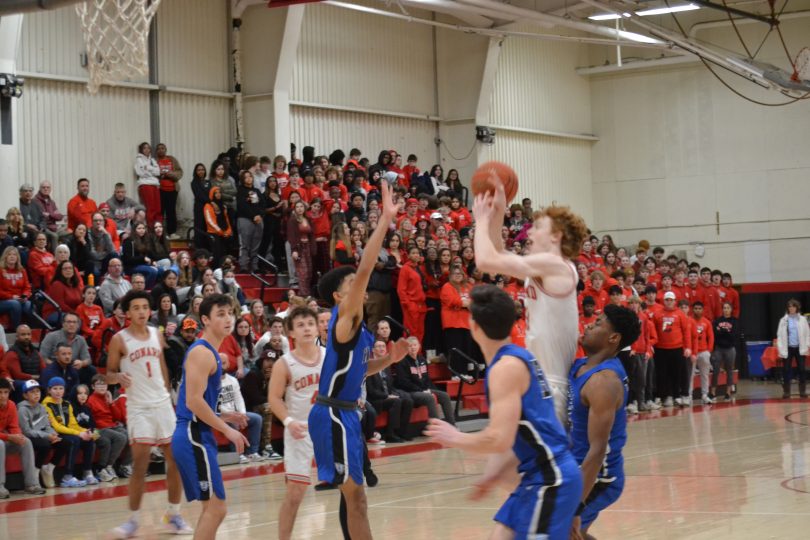 Riley Fox is closing in on the all-time scoring record at West Hartford’s Conard High School. 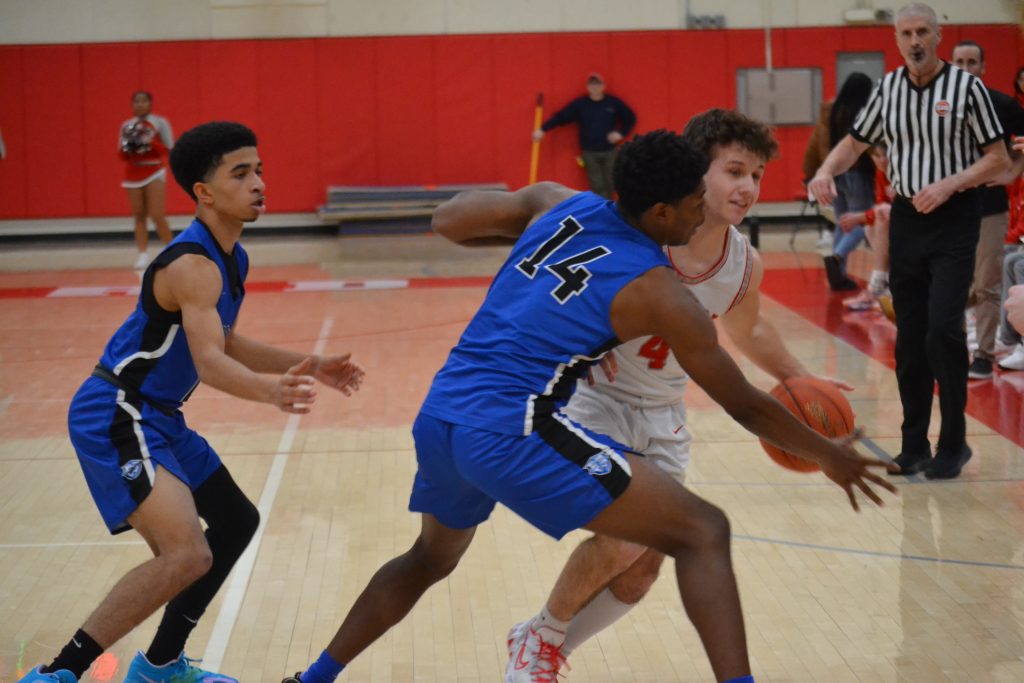 The first of two matchups between the Hall and Conard boys basketball teams was a showcase of just how talented both teams are.

Lead by junior Riley Fox’s 33 points, the Red Wolves took the home portion of the rivalry 59-47 over the Titans in a thrilling game. Justin Hill led Hall with 17 points.

Both teams are now 7-3 with Hall having lost for the first time in five games. “We are in a good place,” said Hall head coach Bryan Moretti after the game. “Seven-and-three at the midway point, and four-of-five.”

With a packed house at Conard, it was Hall that got off to the fast 5-0 start just 90 seconds into the game before Fox hit a pair of free throws for Conard’s first points. Hall would push that lead to 9-4 with 3:20 to play in the quarter. Fox then hit a 3-pointer to make it 10-9, and Hall would not score again in the first. 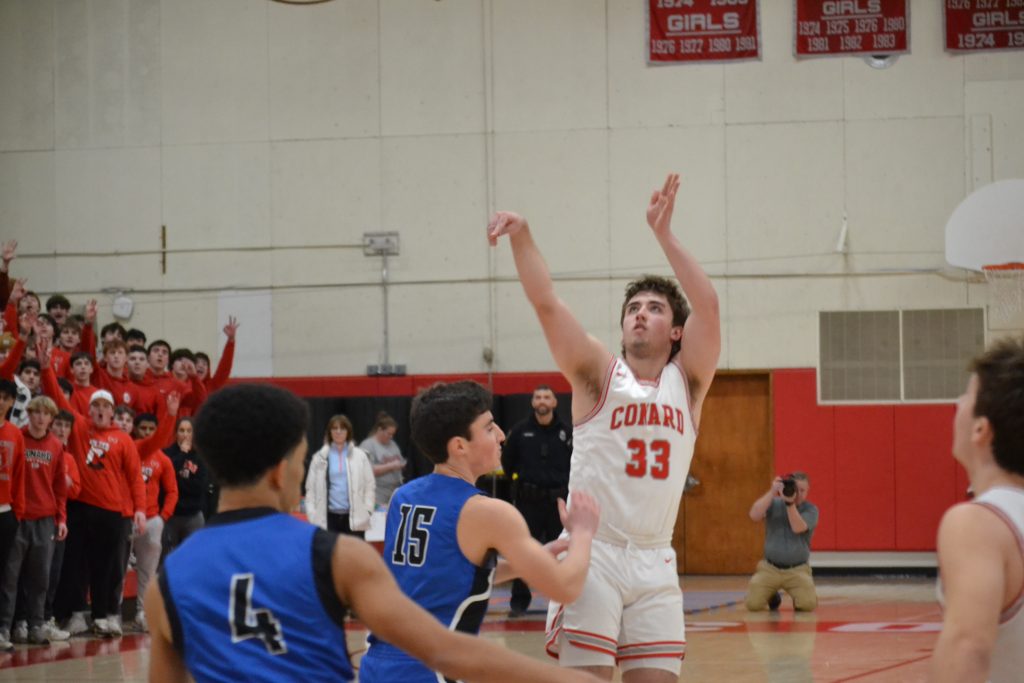 “They came out really great,” said Conard head coach Jared Leghorn of Hall. “They are a very confident team and they are very good.”

Hall would get its offense back on track early in the second quarter when Hill hit a pair of 3-pointers for the Titans to give them the 16-12 lead. “This game is about who is the calmest team to start and we were pretty relaxed,” said Moretti, who is in his 20th year of the rivalry. The two sides would trade baskets and some misses and the first half came to a close when Fox tipped in a rebound off Alex Momeka’s 3-point miss to make it 20-all at the half.

The game would remain close into the third quarter and both sides used steady, pressure defense to keep the score down. Things got a little heated with 2:50 to go when Momeka was given a technical foul after he and a Hall player tangled for a loose ball and Momeka pushed the Hall player. The Titans missed both ends of the technical free throws and failed to score on the ensuing possession. 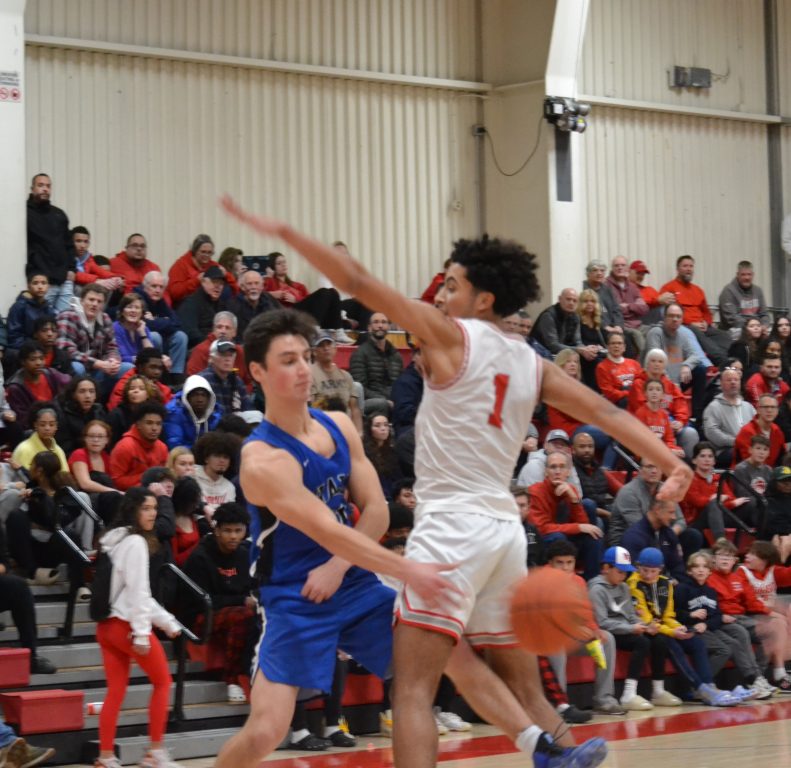 Ninety seconds later Fox would put Conard up by 4 with his basket from the top of the key.

Conard turned the ball over on the inbound pass to open the fourth quarter, and again on the next possession, but Hall only managed 2 points to make it 40-37 Red Wolves. Harris Berson would tie things up at 40 with his two free throws with 5:33 to play, but it would be all Conard after that.

Momeka hit a backdoor lay-in, and Fox hit a 3 to give Conard a 5-point lead with 4 minutes to play. “Every team sends two and three players after Riley and we are still working on getting him looks ion those situations,” said Leghorn.

With the deficit at 7, Hall’s Amecca Freeman made it 47-43 with just under three minutes to play, but with Jaydon Schuler’s 3 from deep in the corner and Fox and Momeka hitting several from the charity stripe, Conard would push the score to the 59-47 final.

“Down the stretch they hit some huge shots,” said Hall’s Moretti. “We had some early looks but at the end we missed.”

The rematch will be at Hall on Feb. 22 – the final game of the regular season for both teams. “You can enjoy it after the game,” said Leghorn of the rivalry. “We are going back there and it will be a difficult game.”

Moretti likes where his team is now and took Wednesday’s game as another chance to learn. “When you play a good game like this everybody, even the players who don’t get in and the coaches, gets better.”

He also had high praise for Hill, who came to the team this season from Rhode Island. “He’s an amazing edition,” said the coach. “He wants to get better and is very easy to coach. “

Fox’s 33 points moved the junior to within 50 points of the school’s all-time scoring mark. The Red Wolves are at East Catholic (9-1) on the 23rd and Avon (1-8) on the 28th before returning home for a re-match with powerhouse Northwest Catholic (10-1). 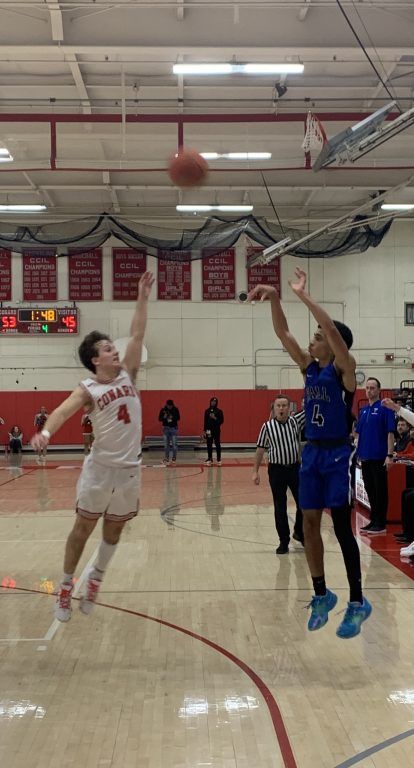