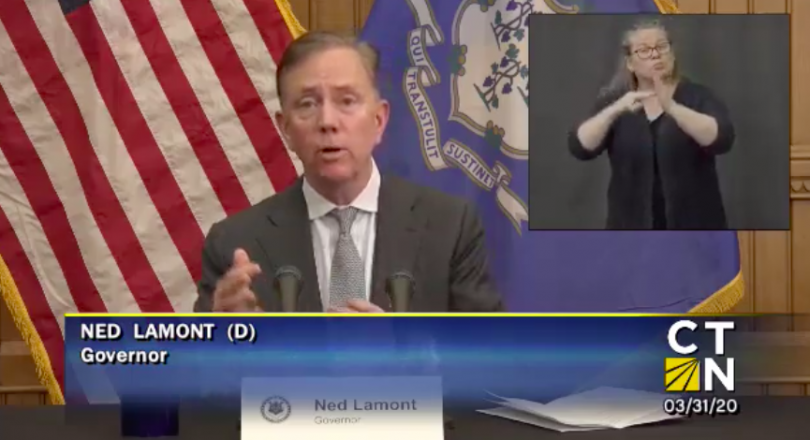 Connecticut’s reported death toll nearly doubles in one day and hospitals near capacity while no supplies are coming from the federal stockpile. Gov. Ned Lamont warns state: ‘We’re on our own,’ during Tuesday’s press conference. 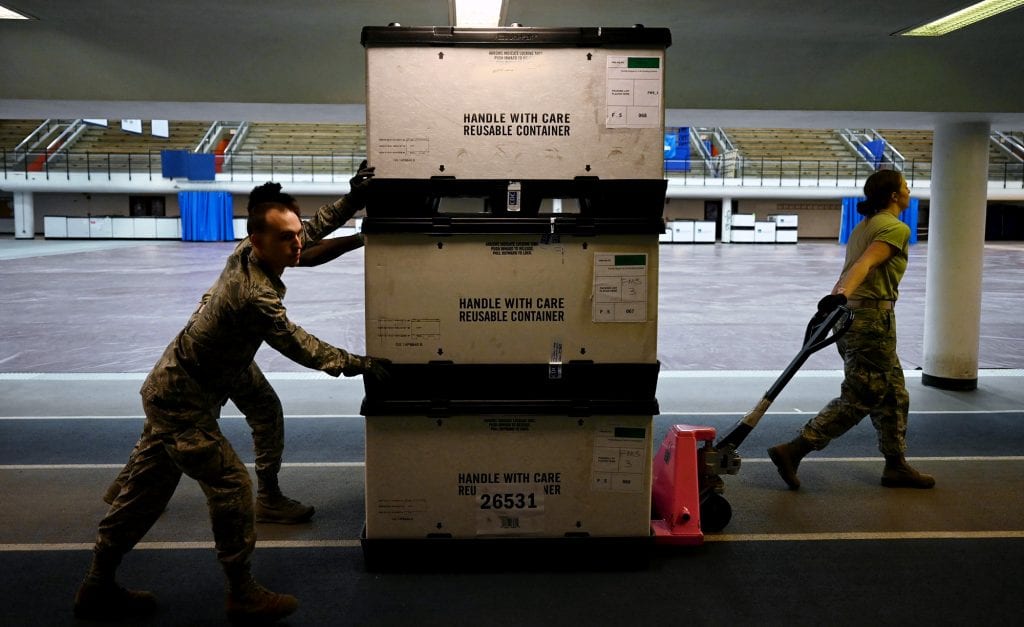 Members of the Connecticut National Guard unload equipment for a 250-bed field hospital that will be staged at Southern Connecticut State University to facilitate overflow for regional hospitals. (Ryan Caron King/Connecticut Public, Courtesy of CTMirror.org)

By Gregory B. Hladky, CTMirror.org

As Connecticut’s death toll nearly doubled Tuesday and the number of confirmed COVID-19 cases rose by 557 in 24 hours, Gov. Ned Lamont delivered a bleak message to the state’s residents about a lack of critical supplies needed to fight the pandemic.

“The national strategic stockpile is empty,” Lamont said, meaning Connecticut won’t be receiving from the federal government any of the personal protective equipment (PPE) and ventilators needed by hospitals to treat dangerously ill coronavirus patients other than the 50 ventilators it just received. “For now, we’re on our own.”

Lamont said state officials and Connecticut hospitals are continuing to seek crucial medical supplies from around the world.

“This breaks my heart,” Lamont said. “I feel like a general sending troops into battle without the protective gear they deserve.”

The death toll jumped from 36 to 69 in one day. Officials said the dramatically higher number includes the 16 people who died in the past 24 hours and 17 deaths that occurred over the past several weeks but that hadn’t been officially recognized as coronavirus-related until now.

The total number of confirmed COVID-19 cases in Connecticut now stands at 3,128. A total of 608 people in the state had been hospitalized because of the virus as of Tuesday, according to the latest state report, up from Monday’s tally of 517. 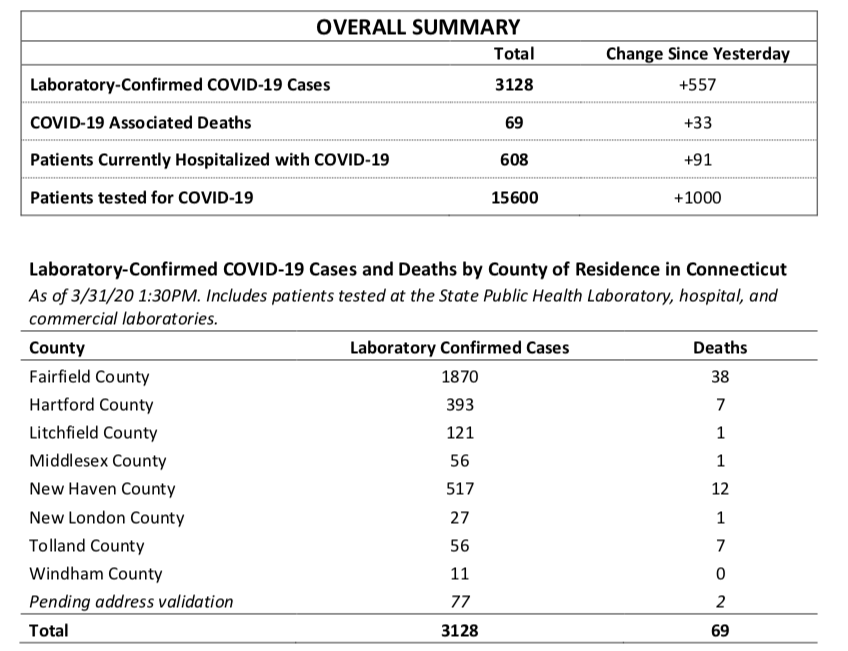 In West Hartford, the number of positive COVID-19 cases increased sharply, from 12 as of Monday to 20 according to Tuesday’s report. According to Aimee Krauss, acting director of the West Hartford-Bloomfield Health District, the newly diagnoses cases were people between the ages of 30-40 and 80-90.

Asked what he would say to Connecticut residents frightened by the pandemic’s growth, Lamont said, “I’m a little scared as well.” He said Connecticut is “now the fourth most COVID-infected state in the country per capita” behind New York, New Jersey, and Louisiana.

But the governor repeatedly insisted that state government, hospitals, and other institutions are doing everything they can, and he again urged people to stay home if possible and to use social distancing if they must go out.

State experts predict the COVID-19 infection rate is likely to double every 3-5 days and that the peak of the pandemic in Connecticut is likely to hit around April 11-14.

“April will be a horrible month,” the governor said.

Lamont said hospitals in Fairfield County are now near capacity but that there are more hospital beds available in Hartford County and elsewhere in the state.

“Do we have enough? No,” the governor said. He also said hospitals across Connecticut are now cooperating with each other and that the state’s capacity to deal with coronavirus victims is expanding as a result of mobile hospitals and auxiliary facilities. 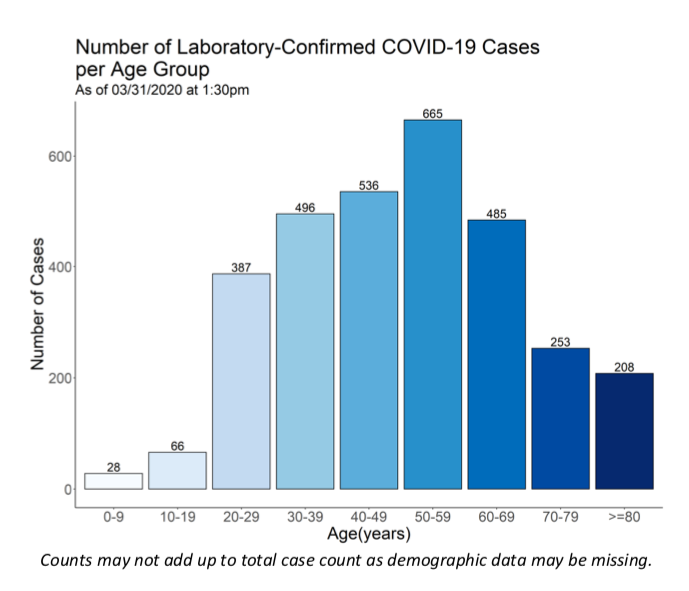 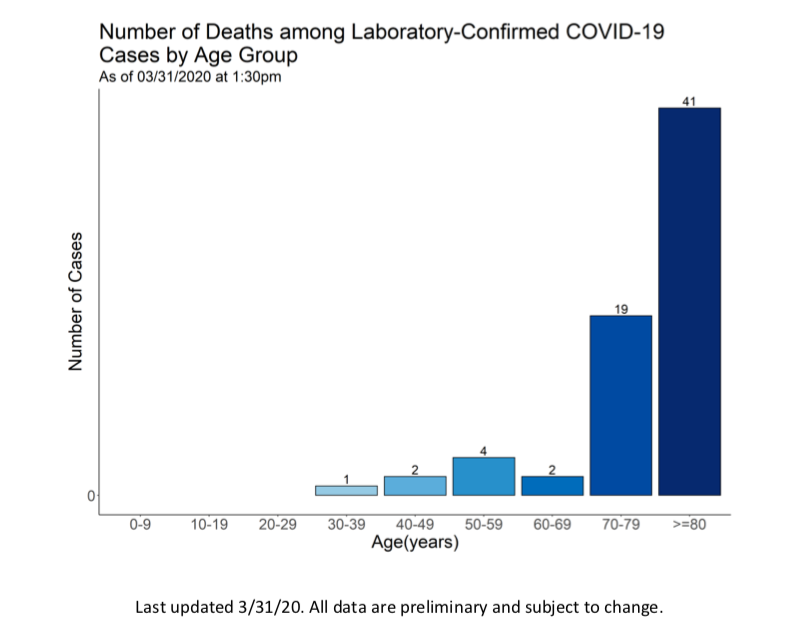 The growing impact of the coronavirus across Connecticut was highlighted Tuesday by announcements that 10 patients and two staff members at state mental health hospitals in Middletown have now tested positive for the coronavirus, as has a second state prison inmate and the president and CEO of Bristol Health.

Josh Geballe, Lamont’s chief administrative officer, said at the governor’s Tuesday afternoon briefing that 30 out of 216 Connecticut nursing homes have now reported at least one resident testing positive for COVID-19. The governor said officials are moving quickly to isolate those coronavirus-positive nursing home residents in special wings or separate nursing homes dedicated to the disease. 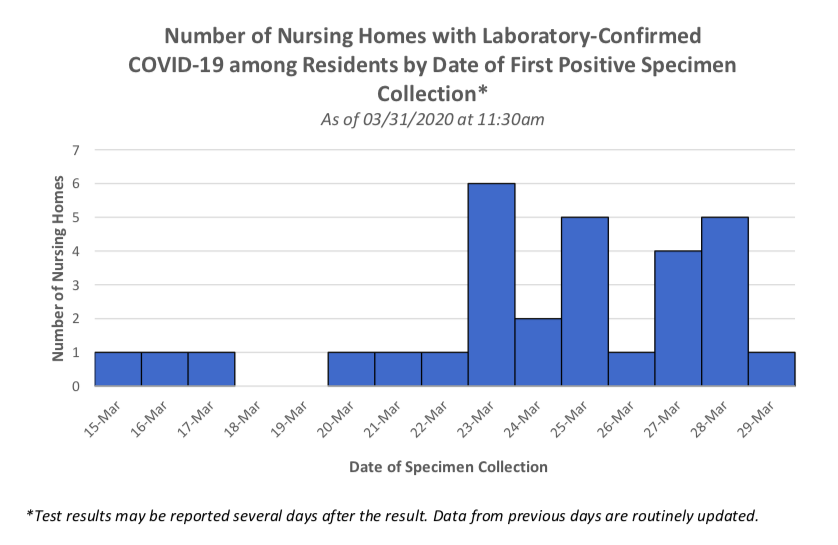 Department of Mental Health and Addiction Services officials said that seven of the COVID-19 positive cases within their facilities were at Connecticut Valley Hospital. Five patients have tested positive at Whiting Forensic Hospital. There are no confirmed cases at any of the six other inpatient psychiatric hospitals under the department’s purview.

A DMHAS spokesperson said the agency has briefly stopped admissions to some units to re-configure the rooms so patients and staff can better practice social distancing. They also have restricted visitors from DMHAS facilities, approved 1,000 employees for tele-work and told staff who are symptomatic to stay home and practice social distancing so they don’t expose those entrusted to their care to the potentially deadly virus.

n an email sent Monday night, a DMHAS spokesperson said the agency will be releasing information in the aggregate, not in a case-by-case basis, “to avoid violating privacy laws.”

Some good news for homeowners

But Lamont and officials of Connecticut credit unions and banks did have good news Tuesday for homeowners, saying financial institutions across the state are agreeing to a 90-day grace period for mortgage payment problems related to the COVID-19 crisis. They said people who were laid off because of the pandemic or are unable to make mortgage payments because of the pandemic will be allowed to put off making those payments for two months  without penalties if they make arrangements with participating financial institutions.

Banking Commissioner Jorge Perez said the goal of the new program is “to make it as simple as possible” for homeowners. Officials said that, as of Tuesday, 40 credit unions and 25 banks in the state have already agreed to these proposals in the past two days and that more are expected to join the plan as the week progresses. Perez said homeowners should wait a couple of days to allow financial institutions to prepare and then apply for the grace period online.

Lamont also said renters in this state will not be evicted in the next 90 days for failing to pay landlords if the reasons are related to job losses or other COVID-19 related situations.

Homeowners can now write their mortgage servicer requesting a 180-day moratorium on payments, without penalties or other fees. The servicer may extend the period for an additional 180 days at the borrower’s request.

Landlord of multi-family residences, (such as apartment buildings, condominiums and trailer parks) can request a 30-day forbearance period, which can be renewed twice.

The CARES Act also contains several provisions that prevent the eviction of tenants of a certain buildings secured by federally backed mortgage loans for 120 days, beginning on the day the bill was signed, March 27.

This provision also applies to tenants in certain single-family homes.

Besides being barred from starting evictions processes, those landlords can’t impose any fees, penalties or other charges on a tenant for late payment of rent.

The governor also said he is “very confident” that no Connecticut resident will lose their health insurance as a result of distress caused by the pandemic and said he expects to make a formal announcement with health insurance companies soon.

Connecticut’s Labor Department has now received 100,000 new unemployment compensation claims since the start of the pandemic and Lamont said there is now a “five-week lag time” in processing new claims. But the governor said no one will lose money because of the back-up, but those payments will be delayed.

Meanwhile, mobile hospitals in New Haven, Danbury and Hartford were being readied Tuesday for an expected influx of coronavirus patients in the near future.

A 250-bed facility was being constructed inside Southern Connecticut State University’s Moore Fieldhouse. The mobile hospital is part of the Federal Emergency Management Administration’s response to the pandemic and is expected to house non-critical COVID-19 patients.

State mobile hospital units with 25 beds each have been constructed at Danbury Hospital and at Hartford’s St. Francis Hospital. A third 25-bed facility is being set up at Middlesex hospital in Middletown.

Officials at Stamford Hospital, which is dealing with large numbers of coronavirus cases, is also looking to use the health care system’s once-mothballed Tully Center in Stamford to house recovering or non-acute virus patients from both Stamford and Greenwich Hospitals.

“The state needs to be taking all steps possible to provide relief to our small businesses,” said Lamont, who already has waived corporation and other business tax filing deadlines. The governor also recently pushed the state income tax filing deadline from April 15 to July 15.

According to DRS, businesses that have $150,000 or less in annual sales tax liability qualifies for an automatic extension. A separate, $150,000 limit on liability is used to determined eligibility for a room occupancy tax filing extension.

For those small businesses that file sales and room occupancy tax returns monthly, payments originally due on March 31 and on April 30 both are now due on May 31.

And for those businesses that file quarterly returns, payments due on April 30 also are due on May 31.