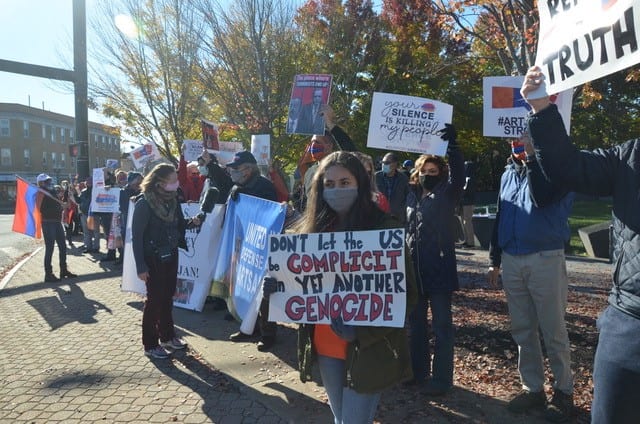 The rally at the Veterans Memorial was intended to draw attention to attacks by Azerbaijan against the Armenian citizens of the Artsakh Republic. 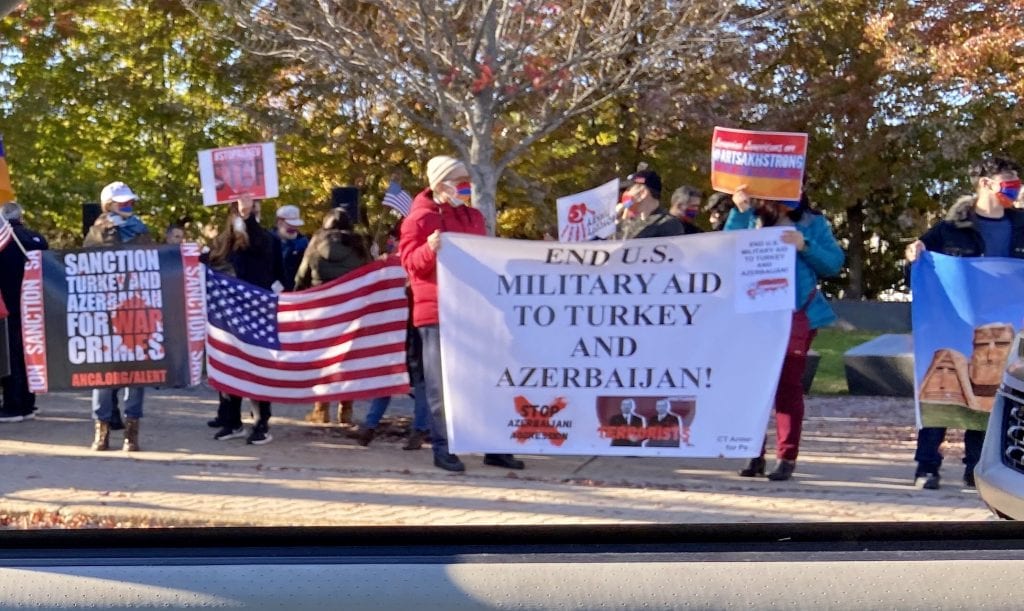 On Oct. 31, 2020, an estimated 150 people gathered in West Hartford Center to rally for the United States government to recognize the sovereignty of Nagorno-Karabagh as it fights for its survival against military attack by Azerbaijan.

Nagorno-Karabagh, “Artsakh” as it is known to the Armenians who have populated that region for millennia, is currently under overwhelming military attack by Azerbaijan with assistance from Turkey and paid mercenaries from nearby countries. Although the current military assault was started on Sept. 27, 2020 when Azerbaijan fired shells targeted at destroying Armenian schools, hospitals, churches and homes, the region’s conflict dates further back in time.

For the Armenians living generationally on the Artsakh land, family stories abound, being passed down from generation to generation. These are stories of life during the ancient Armenian empire through to the recent history of the Armenian Genocide of 1915 by Ottoman Turks.

Out of the horrors of the 1915 Armenian Genocide, the Armenians established the Republic of Armenia, a sovereign nation that governed the land from 1918 through 1920 when the U.S.S.R. took control.

At that time, the U.S.S.R. divided the two-year old Republic of Armenia into two regions. The first region became the Armenian Soviet Republic (SSR), and the second region became Nagorno-Karabakh Autonomous Oblast (NKAO). The U.S.S.R. granted NKAO autonomous status, placing it within the borders of Soviet Azerbaijan yet maintaining the land’s original contiguous physical border to the people’s national identity with Armenian Soviet Republic.

Throughout the remaining twentieth century, the government of NKAO persisted in its efforts to join the Armenian Soviet Republic by bringing the issue before the U.S.S.R.’s central bodies. Finally, in accordance with the appropriate U.S.S.R. law in December 1991, NKAO adopted a declaration proclaiming itself the Nagorno-Karabagh Republic by a referendum whereby 99% of the citizens voted for this independence.

For three years, its citizens were forced to militarily fight to protect their independence against military attacks by Azerbaijan. In May 1994, a cease-fire was signed by the Nagorno-Karabagh, Azerbaijani and Armenian defense ministers.

For 30 years, the Republic of Artsakh (a.k.a. Nagorno-Karabagh Republic – a name used during the Soviet era) has governed as a presidential democracy with a unilateral legislature. Its national flag is a horizontal tricolor of red, blue, and orange with a sideways zig-zag chevron in the center. Its national currency is the Artsakh dram, and its national language is Armenian.

Unfortunately, today, Azerbaijan, a nation of 10 million people, is not only undermining its own cease-fire agreement of 1994, but it is attempting to continue the Armenian Genocide of 1915 against the 150,000 Armenian citizens of the Artsakh Republic. The brutality of Azerbaijan’s attacks against this small nation of people includes the use of internationally prohibited cluster bombs and white phosphorous incinerating devices.

The gathering in West Hartford Center is just one of many occurring in cities – large and small – across the United States, calling for action from the president of the United States of America and the United States Congress to pass resolutions (S.RES. 754 and H.RES.1165) to cut military aid to Azerbaijan and Turkey given their use of American weaponry for destruction and to demand the end of Azerbaijani and Turkish attacks on the people of Artsakh, recognizing the independence of the Republic of Artsakh as a sovereign, democratic nation.