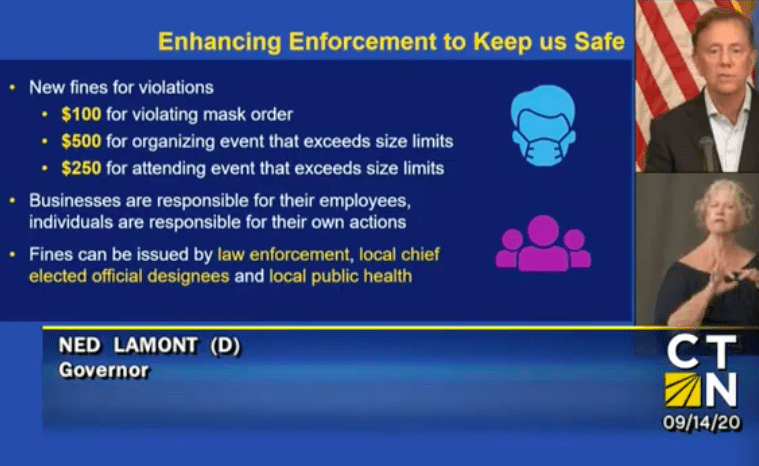 West Hartford Mayor Shari Cantor said that being able to give infractions for violations of state mandates will be a good tool available to the town.

Gov. Ned Lamont announced Monday that a set of fines is being established for violation of a state mandate regarding wearing face coverings, and for those who host or attend gatherings that exceed the state-set size limits.

West Hartford Mayor Shari Cantor said she and Town Manager Matt Hart have been asking the state for additional tools to help reinforce the importance of wearing masks or other face coverings in the Center and Blue Back Square, where physical distancing of 6 feet is difficult on narrow, often busy sidewalks.

The governor’s Executive Order 7BB mandates the wearing of masks or other face coverings when indoors in a public space or when 6 feet of physical distance cannot be maintained.

The exact wording for violations will be issued in an executive order as soon as Monday evening, with the rules beginning later this week, the administration said.

A fine for violating a mask order will be $100, organizing an event that exceeds the permitted size limit (25 indoors and 100 outdoors) will carry a $500 fine, and those who attend an event that exceeds size limits can be fined $250. Gathering sizes do not apply to restaurants or other places of business that are subject to specific requirements, nor do they apply to events such as sports contests that also have their own specific rules.

“If you have to count, get out,” Lamont said about the responsibility for keeping track of the number of people at a gathering.

“This is a really important tool, not to be punitive but to reinforce the importance of wearing a mask to protect each other and the health of our community, and to understand the consequences of not doing so,” Cantor said.

“I’ve been reaching out to the administration about West Hartford Center and Blue Back Square,” Cantor said. The town has engaged its police and fire departments, as well as the West Hartford-Bloomfield Health District, in outreach, in an effort to educate the public. Personnel, including bike teams, have been in place on weekends, speaking with people who are not wearing face coverings and they have handed out hundreds of masks over the summer.

While the town has installed signage in West Hartford Center and Blue Back Square – sandwich boards and banners hanging from the light poles – requesting that masks be worn and physical distancing be maintained, there has been a lack of a specific penalty or fine permitted by the state as enforcement. Currently the only recourse would be arresting someone and charging them with a misdemeanor. 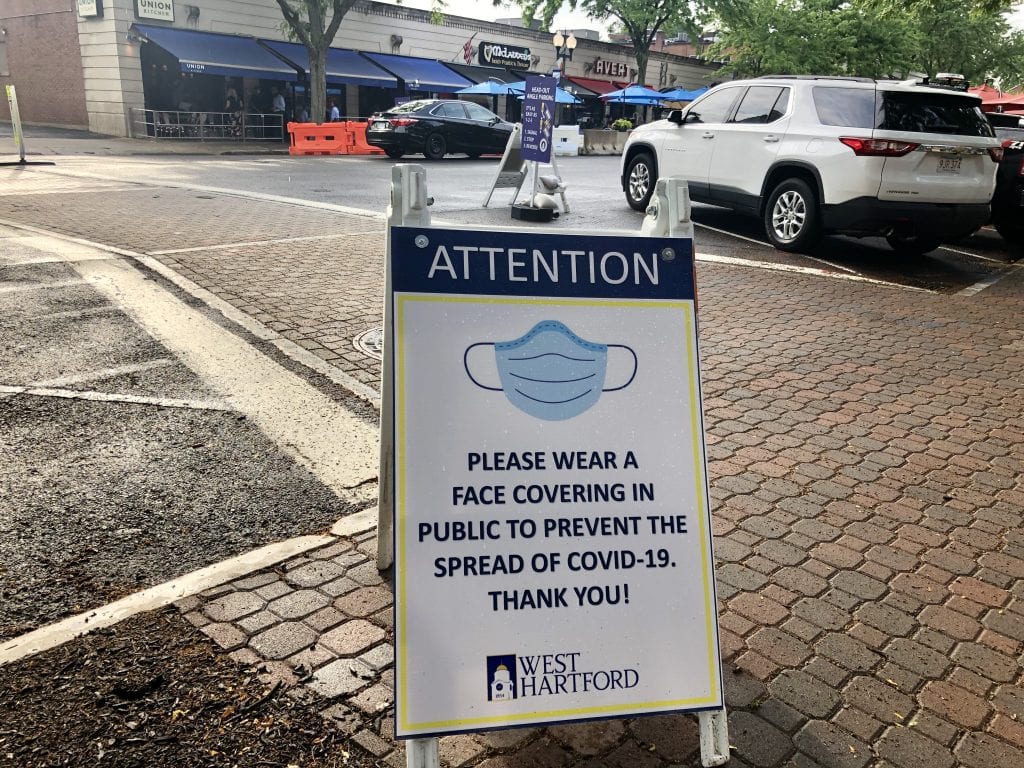 “We’ve initiated this outreach,” Cantor said, “but we still have 30, 40, sometimes 50% not complying.” Cantor said she has gotten emails from people who have visited Cape Cod, where a fine of up to $300 can be charged for not wearing a mask or face covering in places where it’s required, and people have asked why that can’t happen in West Hartford.

Elected leaders, town managers, and health department officials from about 15 different municipalities had a call with state officials several weeks ago, Cantor said.

“We share our experiences, and our frustrations,” she said.

“It was really in response to a request, to multiple requests by our municipal partners,” Josh Geballe, the state’s chief operating officer, said Monday regarding why enforcement standards are being established. “They asked for this new tool, an infraction … to help ensure that people were following the requirements at a local level.”

Geballe said the administration felt that establishing the fines is “an appropriate thing to do.”

Unauthorized gatherings, like large parties where a fee is charged to attend, have been brought to the attention of authorities in numerous municipalities, but that has not been a problem reported thus far in West Hartford, Cantor said.

West Hartford was, however, one of the three municipalities to send a letter in early August to James Rovella, commissioner of the Department of Emergency Services and Public Protection, requesting the ability to limit gathering sizes to 20 outdoors and 10 indoors, rather than the current limits of 100 and 25 respectively, in order to avoid possible super-spreader events that could be caused by large gatherings of college students returning to campuses.

Cantor said there is some concern about the possibility of college parties, and in addition to two campuses located in West Hartford, there are many students from Trinity and UConn’s graduate and professional schools that live in town.

The governor said at his press briefing Monday that issuing a fine is easier and more straightforward than “heavier handed remedies,” such as arresting someone for a misdemeanor.

“Also, they asked for it,” Chief of Staff Paul Mounds added. 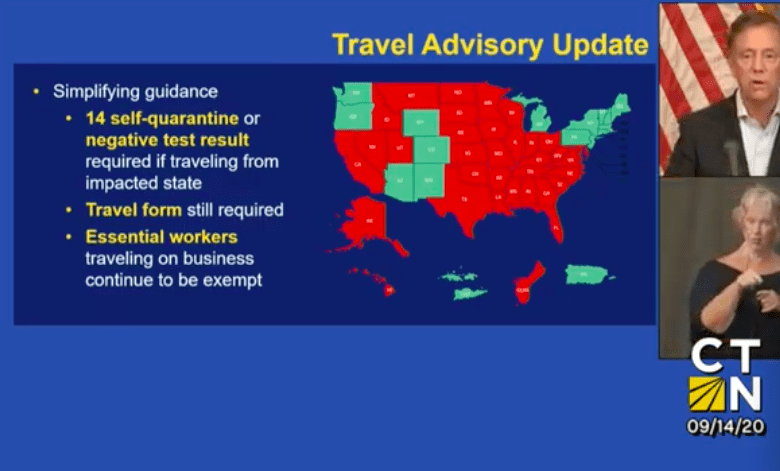 In addition to announcing the new fines, the administration on Monday announced an update to the state’s travel advisory intended to simplify the policy, Geballe said.

While a 14-day self-quarantine is still advised for those returning from states on Connecticut’s advisory list, a negative COVID-19 test result dated no more than 72 hours before returning is acceptable.

In addition, those who are unable to quarantine for 14 days will now be permitted to get tested following arrival in Connecticut, and will not be subject to the 14-day quarantine requirement after a negative result is received.

The travel advisory list – a regional list in effect for Connecticut, New York, and New Jersey – is updated every Tuesday. Lamont said he expects some of the states on the advisory list, shown on the map above in red, to drop off this week.

The self-quarantine requirement applies to any person traveling into Connecticut from a state with a positive test rate higher than 10 per 100,000 residents, or higher than a 10% test positivity rate over a 7-day rolling average.

The self-quarantine rule does not apply to essential workers traveling on business.

Completion of a travel form will still be required for those arriving from states on the advisory list.

Geballe said the guidelines had been modified multiple times and were causing confusion. The new requirement is nearly identical to the policy that has been in effect for some time in Massachusetts, where positivity rates remain low, and could result in increased testing. 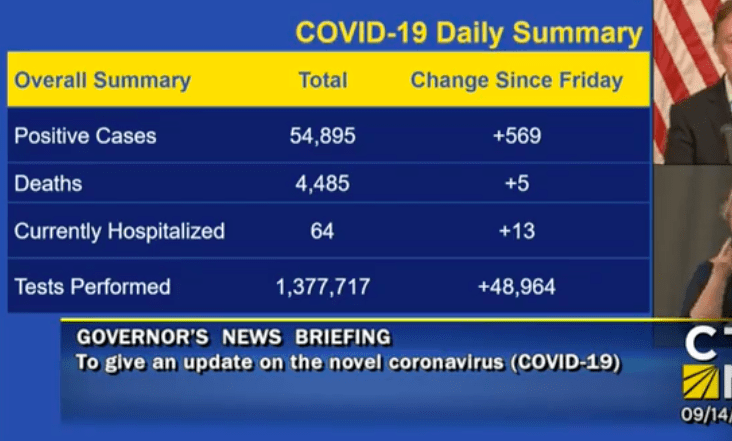 Connecticut’s positivity rate was 1.16% for results reported Monday, that included data from Friday through Sunday. While the rate has exceeded 1% over the past week and is slightly higher than it was throughout most of the summer, the governor did not express concern. Hospitalizations ticked up by 13 and there were five deaths from COVID-19 over the past three days.

While the return of students to college campuses causing a spike in the state’s infection rates, Lamont said Monday that the overall infection rates at the state’s colleges is much less than 1%, while it is slightly higher off campus at UConn Storrs. “Thankfully so far, with strict testing, our universities have done really well,” Lamont said.

The return of students to primary and secondary schools has also not caused a spike as of yet, Lamont said, and the overall positivity rate among the school population is much lower than among the general population. 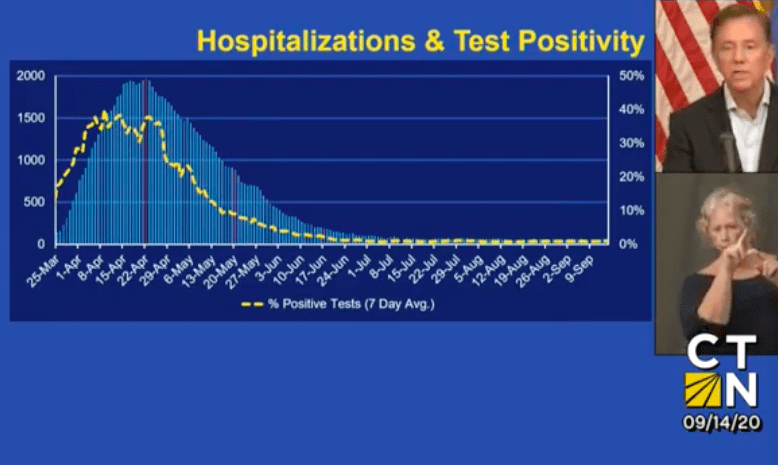