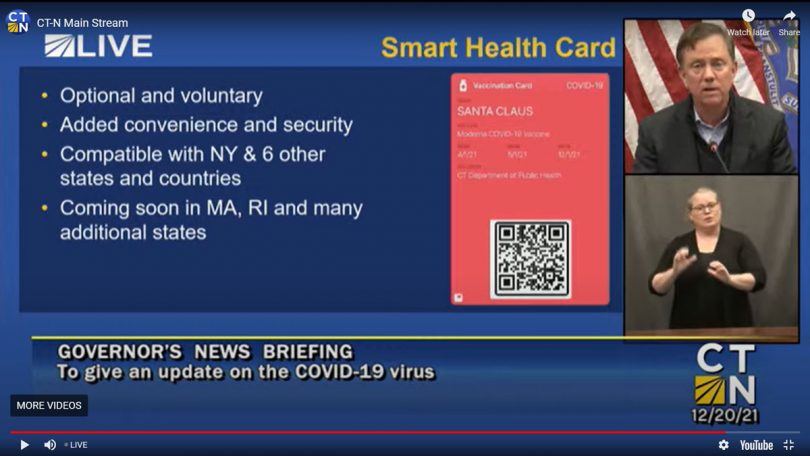 The digital cards are an option for showing proof of vaccination.

Connecticut’s SMART Health Card system went live Monday despite criticism from Republicans in the state who warn they don’t have enough information about the contract.

The governor stressed that the choice to load digital vaccination cards onto smartphones is strictly optional.

“I think this card will make a big difference,” Gov. Ned Lamont said Monday during his COVID-19 briefing.

Republican lawmakers have been critical of the system, which Gov. Ned Lamont said it is voluntary and convenient.

“Why would Connecticut’s government encourage a paradigm where only vaccinated people are allowed access to the grocery store, the library or an office building?,” Rep. Kimberly Fiorello, R-Greenwich, said. “Such policies will cause great harm to the fabric of our community and foment hate and fear amongst neighbors.”

Republicans worry that restaurants and other retail businesses like grocery stores or pharmacies would use them to keep out unvaccinated residents.

“Lamont’s ­administration has suggested that those who oppose his constant assault on individual choice when it comes to medical decisions are ‘fearmongering’,” Sen. Rob Sampson said. “Lamont is openly calling for private businesses to begin dividing the free citizens of Connecticut into classes for the purpose of segregation and discrimination. I would say that is worth clamoring attention to.”

Josh Geballe, Lamont’s chief operating officer, said they need to look at what apps they’re downloading on their phone if they are really worried about privacy. He said the information, which is owned by the state, is not being sold to any third parties.

Outside of retailers and restaurants, manufacturers and offices that want to reopen have been looking forward to a way to verify their employees’ vaccine status.

Chris DiPentima, president and CEO of the Connecticut Business and Industry Association, said businesses he’s spoken to appreciate being able to verify that their employees are vaccinated.

He said there’s a lot of issues with fraud with the paper cards, which are also less convenient. However, he said there are also problems with the digital system because many times a person may have received one vaccine in another state and it doesn’t show up in Connecticut’s system.

Connecticut’s system is compatible with New York and six other states.