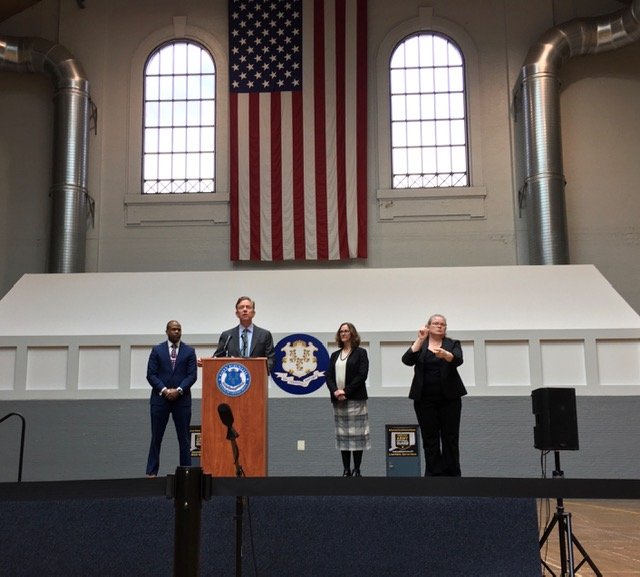 Gov. Ned Lamont said during Tuesday’s briefing that Connecticut is still on the “escalator going up” when it comes to COVID-19 cases. Photo credit: Mark Pazniokas, CTMirror.org

Gov. Ned Lamont provided a briefing Tuesday regarding the number of confirmed COVID-19 cases in the state, as well as updates related to education and the creation of a temporary hospital in a parking lot outside St. Francis Hospital in Hartford.

By Greg B. Hladky and Mark Pazniokas, CTMirror.org

Information in this article specifically regarding West Hartford was inserted by Ronni Newton at we-ha.com.

The number of confirmed coronavirus infections in Connecticut jumped by more than 200 cases overnight, while officials Tuesday confirmed a new hotspot at a Ridgefield senior living center and announced the virus has infiltrated the state’s main psychiatric hospital.

The ongoing surge prompted Gov. Ned Lamont to announce that he expects schools in the state to remain closed until the fall.

Executive Order 7L issued by the governor Tuesday, enacts multiple provisions, and specifically extends the closure of public schools through at least April 20.

Lamont said Tuesday the number of known COVID-19 infections in Connecticut has risen to 618 and officials said that two more people in Connecticut have died of the disease, bringing the death toll in the state to 12. Another 71 people have been hospitalized with the virus.

“We’re still on the escalator going up,” Lamont said of the dramatic rise in infections. “I’m afraid this is going to continue [for the next several weeks],” the governor said during his afternoon media briefing.

In West Hartford, the total increased from three confirmed COVID-19 cases on Monday to six on Tuesday. 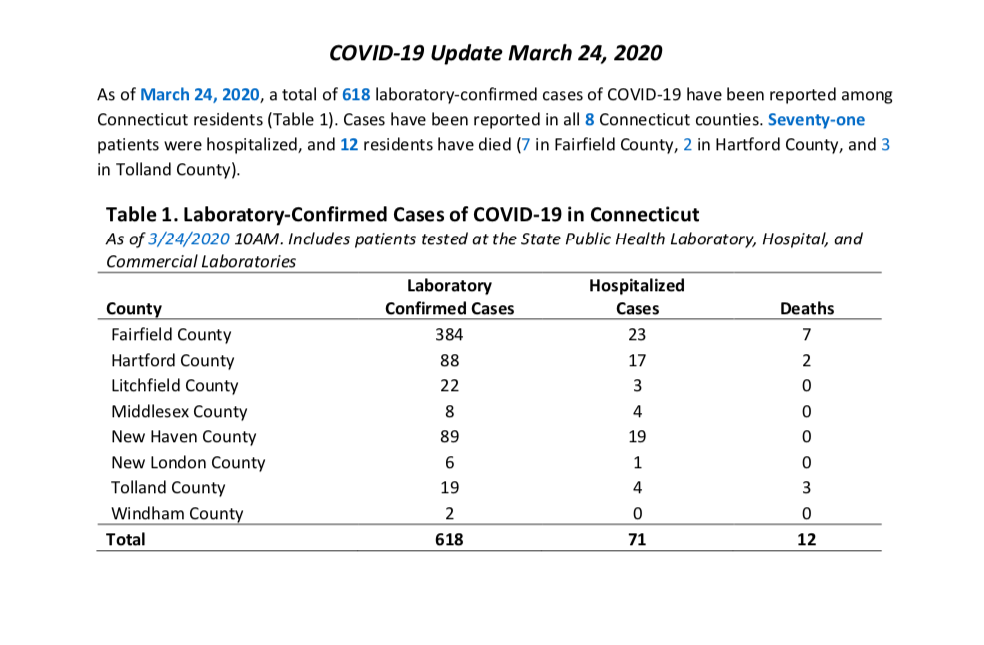 A spokesman for a Ridgefield assisted living facility, Benchmark Senior Living, said another resident at the facility died Monday from COVID-19 and is the second virus-related death there. Officials said 16 other seniors there have now tested positive for the virus.

“These residents have not exhibited any symptoms and are being closely monitored and cared for by our trained staff,” facility officials said in a statement.

Tuesday night, the Department of Mental Health and Addiction Services announced that an employee who works closely with patients at Connecticut Valley Hospital, the state’s 319-bed psychiatric and substance use treatment facility in Middletown, has tested positive for COVID-19.

The employee was last at work on March 10, the agency said, and was tested on March 14 after being out sick with flu-like symptoms. DMHAS was notified of the positive test on March 23.

Earlier in the day, in an interview with a New York-based radio station, Lamont said that all of Fairfield County should now be considered a coronavirus hotspot, along with New York City and Westchester County.

“I can tell you that, in Fairfield County, you are probably five times more likely to be infected than you are in the rest of the state,” Lamont told WCBS 880. He later added that what’s happening in southwestern Connecticut is a warning and gives “the rest of the state time to get ready for what’s coming.”

As of the start of this week, 415 people in the state had been diagnosed with coronavirus and the 203 additional infections identified just 24 hours later confirmed experts’ grim predictions that the spread of the illness was accelerating in Connecticut.

Health officials said the number of infections is likely to double every 3-5 days.

The state Department of Mental Health and Addiction Services said one staff member at Connecticut Valley Hospital in Middletown has tested positive for COVID-19 and two patients in that facility, for people with mental illness, are showing symptoms of the virus.

Lamont also said the number of hospital beds is rapidly expanding, including 25-bed mobile units being constructed at hospitals in Hartford and Danbury. He said that about 900 retired doctors and nurses have offered to come back to work to help deal with the epidemic and that 300 of them are already working in health care facilities across the state.

Lamont said state purchasing officials are “scouring the country, scouring the globe” to buy badly needed personal protective equipment, referred to as PPEs, like surgical masks, gloves, and gowns for medical personnel. He said many people, businesses and institutions are stepping up with donations, including nearly a million sanitary gloves being donated by the Mohegan Sun. The state is also ordering thousands of ventilators, which are critical for treating people with severe cases of COVID-19 and are in short supply in Connecticut and around the U.S.

Gov. Andrew Cuomo said Tuesday the pandemic is hitting New York harder and faster than anticipated, with 25,665 confirmed cases and 3,234 people hospitalized with the virus.

Nearly a quarter of those hospitalized required intensive care, a trend that could overwhelm hospitals. “That’s the problem,” Cuomo said.

Lamont, who said Monday he is extending school closures to at least April 20, said during a Tuesday radio interview that he now believes the schools probably won’t reopen until the start of the next academic year.

“I really think that’s a likelihood,” Lamont said. “You worry if people get back too quickly, there will be a second iteration of this virus. So April 20 is the minimum – it’s probably the school year.”

“The governor is looking at this public health crisis as potentially lasting a longer period of time than initially thought,” Max Reiss, Lamont’s spokesman, said in an email. “Governor Lamont is telling school systems they must be prepared for a potentially unprecedented break from classes being held at schools as a result of the coronavirus to ensure students, teachers, staff and parents are safe.”

CEA President Jeff Leake, head of the largest teachers’ union in Connecticut, said teachers “strongly agree with Governor Lamont’s decision to keep schools closed until April 20 and possibly until the end of the school year.”

“The common belief is that things will get worse before they get better, and keeping schools closed until the fall may be necessary to keep everyone safe and prevent the disease from spreading,” Leake said. “In the meantime, our dedicated, professional educators are doing all they can to keep their students engaged and learning in today’s reality.”

The governor said Connecticut will be distributing books and other supplies for home studies to kindergarten through eighth grade students as a result of donations made by Indra and Raj Nooyi. The materials are being supplied at a discount by Scholastic and will provide writing and reading instruction for more than 185,000 Connecticut students.

Lamont stressed the need for the federal government to respond to this crisis on a regional, rather than state-by-state basis.

The majority of New York’s cases are in New York City, by far the most densely populated city in the U.S. But it also has taken root in the suburbs of Nassau County and Westchester County, the latter sharing a border with Connecticut. It had nearly 3,000 cases as of Monday.

“Where we are today, you will be in four weeks or five weeks or six weeks. We are your future,” Cuomo said.

Connecticut’s governor said the virus is expanding in his state “much faster” than efforts to expand hospital capacity. “We’re expanding [the number of hospital beds] fast, but I don’t know if we’re expanding fast enough for the virus,” Lamont said.

Lamont also urged people to heed the warnings to continue social distancing, work from home, and avoid group contacts. He pointed to the now-infamous case of a March 5 Westport birthday party that attracted 50 guests. At the time of the party there were no reported COVID-19 cases in Westport, but at least 85 people tested positive for the virus just 11 days later.

“Because of that party in Westport, you’re much more likely to be infected in Westport than anywhere else [in Connecticut],” Lamont said. 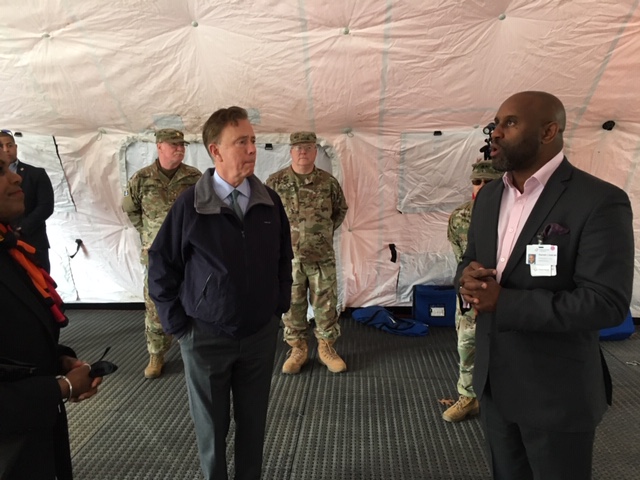 The mobile hospital Lamont toured Tuesday is owned by the Department of Public Health and was last deployed during the Sandy Hook massacre. Photo credit: Mark Pazniokas, CTMirror.org

The question of how quickly COVID-19 cases will surge in Connecticut came up again as Lamont toured a 25-bed mobile hospital under construction outside Saint Francis Hospital and Medical Center in Hartford Tuesday afternoon.

It is one of three mobile units owned by the state Department of Public Health that “are functional and ready to go,” said Renée D. Coleman-Mitchell, the commissioner of public health.

Another will be delivered Wednesday to Danbury Hospital. The mobile units are composed of at least three tents with a foldable frame that are quickly erected. As Lamont arrived, ventilation was being attached to the tent, which will have heating, cooling, and running water.

“How are you on ventilators right now?” Lamont asked, standing on a black plastic honeycombed floor inside the desert-tan insulated tent.

“It all depends on how fast the surge occurs,” said Dr. John F. Rodis, the hospital’s president since 2015.

Rodis said they are closely watching the rapid increases of cases in New York City.

“We need to be prepared physically and emotionally for that,” he said.

Rodis said St. Francis applied for one of the mobile hospitals after Lamont insisted hospitals increase their capacity. With 637 beds, St. Francis is the smallest of the state’s level 1 trauma centers, he said. 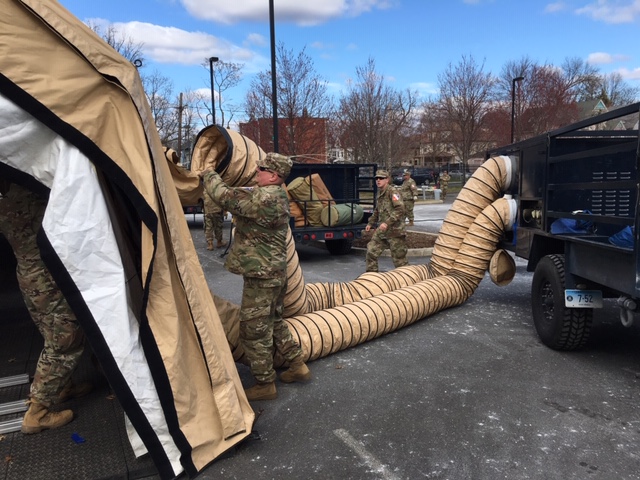 The hospital was uncertain what it would do with the extra space, Rodis said. The need would be assessed as the cases increase.

In Hartford, police will begin using public loudspeakers mounted on their cars to play pre-recorded messages in English and Spanish reminding people of the importance of keeping a safe distance between themselves and others.

The messages will be played if officers see groups of people who aren’t practicing social distancing, city officials said.