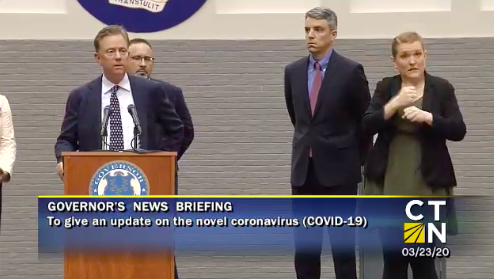 Gov. Ned Lamont and other officials provided an update Monday afternoon regarding state statistics and response to the COVID-19 pandemic, including a spike in cases and a delay in opening schools until at least April 20.

New data regarding the impact of COVID-19 in Connecticut was released Monday afternoon, and at a briefing Gov. Ned Lamont said the total number of positive cases has increased by 88 in the past day, from 327 on Sunday to a total of 415. There have been two more deaths since Sunday, bringing the total to 10.

West Hartford had its first positive test result reported on Friday, and on Monday the town’s total jumped to three.

“The two cases reflect age ranges of 70-80 and 35-45,” said Aimee Krauss, acting director of the West Hartford-Bloomfield Health District. She said the District is completing trace-backs of close contacts.

“The Health District is strongly encouraging residents to continue social distancing and to stay home if sick,” Krauss said. “We know that not every case will be tested for COVID-19 and we need to assume that cases are un-diagnosed. This is why social distancing becomes important especially when people are outside exercising or enjoying walks with family. We want people to enjoy nice weather and be outdoors but we want to remind our residents to do it safely. As the West Hartford Police remind residents to lock their car doors at 9 p.m., we want to remind people of social distancing when outside among friends. Keep the distance, stay healthy!” 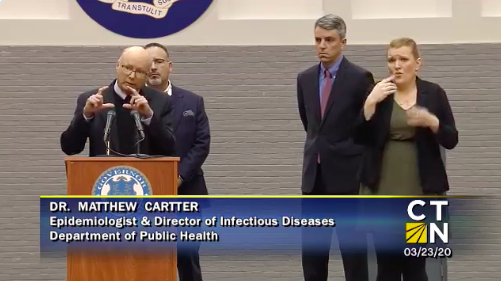 There have now been 4,500 people tested in the state – 900 since Sunday. “The number of positives reflected the increase in testing as well as the infection rate,” Lamont said.

As the numbers have show thus far, the total number of positive cases tends to double every three to four days, a rate that is expected to continue. An estimated 15% of those who test positive end up hospitalized, with 5% needing intensive care.

“We’re actually only measuring the tip of the iceberg,” Dr. Matthew Cartter, the state’s epidemiologist, said Monday. “No one knows how big the iceberg is under the water.”

Cartter said that last week he estimated that the number of actual cases in the state could be in the 3,000-6,000 range, and he said Monday he still estimates it’s in the thousands.

Cartter estimates that based on experience with the flu, the number of hospitalizations is expected to reach the thousands, but he cautioned that “influenza may not be the best model. … It changes every day based on the number of tests done.

Connecticut is still in the “acceleration phase,” Cartter said, noting that it has only been 17 days since the first case was announced.

Social distancing and other measures are needed to slow the rate down, to keep the healthcare system from being overwhelmed, said Cartter. An estimate of when hospitals may reach capacity is not yet clear, but he said the stress right now is on hospitals in the southern part of the state, including Greenwich, Norwalk, Danbury, and Bridgeport. Those communities are close to New York, where there are more than 12,000 cases in New York City and nearly 3,000 in Westchester County.

Cartter said he would love to be able to “press the pause button” until the state has enough personal protective equipment (PPE), but isn’t sure how much the virus has been slowed. “I’m actually pleasantly surprised that Hartford and New Haven counties have not bee much more impacted yet,” Cartter added.

Some “good” news, however, is that according to Lamont the amount of time spent in the intensive care unit is significantly shorter in the state than it was for hospital patients in China, where the novel coronavirus first exploded several months ago. The time required in ICU is roughly two weeks as opposed to four weeks, putting less stress overall on the hospitals.

The state has a list of facilities that can be used if the state’s hospitals reach capacity, including about 2,000 beds not being used at nursing homes. Mobile field hospitals will also be created out of unused dorm rooms should that become necessarily since college students statewide have been sent home. Those alternative facilities would likely be used as intermediate care for when patients leave ICU but are not ready to return home.

“We’re working hard to make sure we have additional space and capacity,” Lamont said. He added that he would like to see the promised help from the Army Corps of Engineers, but the involvement of FEMA is now a “bright spot” in dealing with this emergency.

Equipment – ventilators as well as PPE– is the even more critical need right now, the governor said. If the federal government won’t come through on a unified basis, states already are combining forces and will continue to work on a unified basis to find manufacturers and sources.

Cartter said that the need to re-use N95 PPE, is something he never thought could happen in the United States, and the need to have PPE for those who are working with hospitalized patients is critical. The location of testing sites has been determined to keep people away from emergency departments, as “part of the strategy to protect the hospitals.”

Further data breakdowns by age group and hospitalization is expected shortly, Cartter said. As of now, the rate of positives for those tested is about 12%, and with most of those receiving tests in the 30-50-year-old age group, and the most hospitalizations taking place for those between ages 50 and 80.

There is a quick test available, but the number of those tests that can be done is limited so they are being used primarily in hospitals.

While swabs and PPE are in short supply, and if the shortages become even more severe, testing of those who are not hospitalized may have to be discouraged, Cartter said.

Anyone who has a fever and other symptoms of COVID-19 should assume they have the coronavirus even if they haven’t been tested, and act accordingly.

On the demand side, Lamont said, “Anything we can do to flatten the curve makes and important difference.”

While there have been questions regarding the list of “essential” being too broad, the goal, Lamont said, is to discourage people “from congregating on Main Street.”

He urged people to use their common sense, and for anyone over 70, “stay home.”

Many of the businesses deemed essential are the “biggest building blocks of our economy,” including manufacturing, construction, and healthcare. It’s possible to control the environment with manufacturing, and construction can more easily accommodate social distancing, Lamont said.

David Lehman, commissioner of the Connecticut Department of Economic and Community Development (DECD), said the major focus is to keep people out of offices and other businesses that can’t be done from home. For those that must go to work, he said, protective measures need to be in place because it’s “critical to make sure people are safe.”

Regarding retail being able to offer curbside drop-off and delivery, Lehman said it’s important to give them some way do business if possible and if they want to.

Hundreds of exemptions have already been received from businesses that want to be considered essential.

Lamont is hoping that when the federal government passes a rescue package, it’s given to states as a block grant so the decision can be made on a statewide basis about what industries need the help – for example hospitals as opposed to bailouts for luxury cruise ship companies.

There has been some concern about too many people congregating in state parks, and that will be controlled as best as possible by limiting the number of vehicles in parking area.

“The parks aren’t too small, the groups are too tight,” Lamont said, noting that over the weekend he saw groups of teenagers walking close groups.

Further tightening of the restrictions is a possibility, Lamont said. “Most importantly we want people to do the right thing.”

“We’re going to push off the date schools could possibly open to April 20,” Lamont said.

“At this point in time, the governor will be responsible for deciding the earliest dates we could return to school,” Superintendent Tom Moore told We-Ha.com. “The most important thing we can do right now, to make April 20 a possibility, is to take social distancing seriously.”

Distance learning is in place statewide, and in West Hartford Monday was the first day of remote school.

West Hartford Public Schools has loaned out more than 1,300 Chromebooks, and will continue meal distribution on Monday, Wednesday, and Friday at specified locations.

Over the weekend of March 21-22, the department received approximately 17,000 new claims, and another 10,000 new claims from unemployed workers on Monday.

“We are continuing to shift resources to devote more staff to processing of new claims,” Jensen said. “Governor Lamont has authorized the use of overtime for this purpose, and we have processing staff working on Saturdays.”

A portion of a CT Mirror article by Greg Hladky was included in this story.