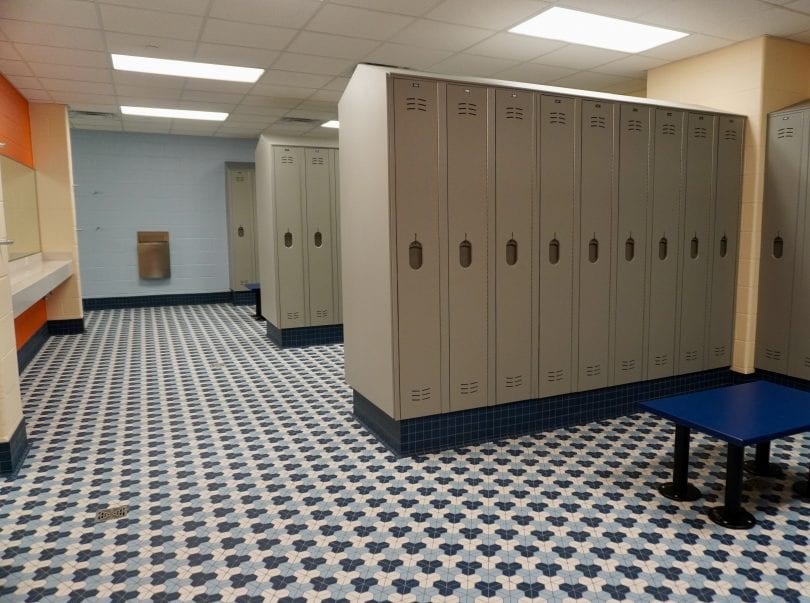 The renovated locker rooms at Cornerstone Aquatics Center in West Hartford had a ‘grand opening’ on Saturday, Feb. 6, 2021. 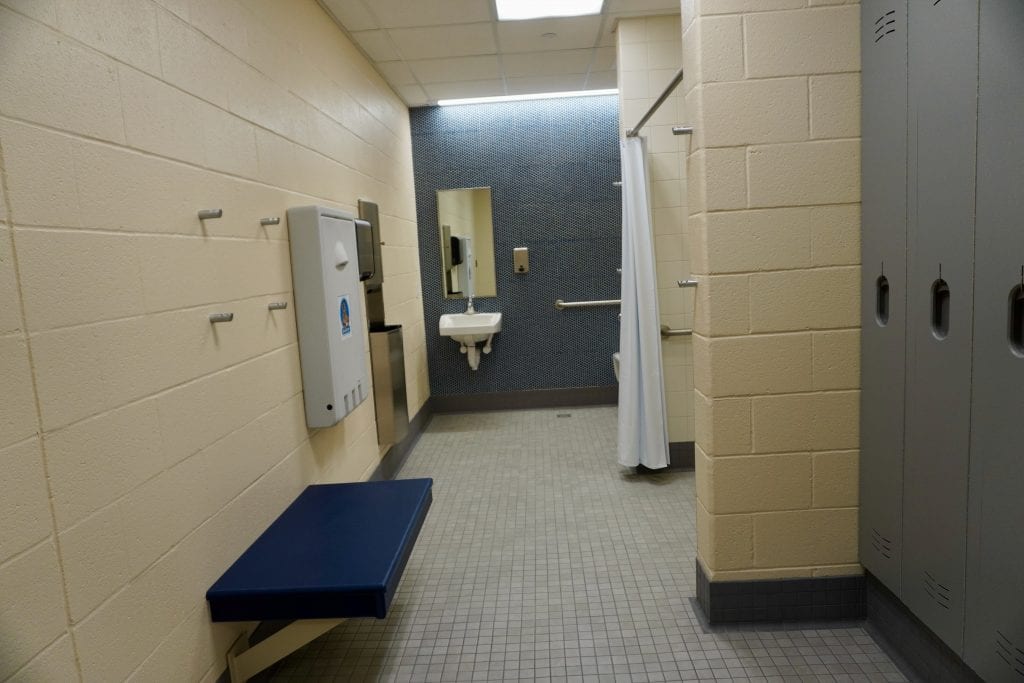 A nearly $1.8 million project that involved the complete demolition and reconstruction of the locker rooms at Cornerstone Aquatics Center in West Hartford has been completed, and the updated spaces had a “grand reopening” to the public on Saturday, Feb. 6, 2021.

Due to the ongoing COVID-19 pandemic, a ribbon cutting or open house celebration was not held, but the public was invited to walk through and see the changes.

“This was a seven-month locker room project – complete demolition, floor-to-ceiling,” said General Manager Michael Kerrigan of HealthFitness, Inc., which manages the Cornerstone facility on behalf of the Town of West Hartford. 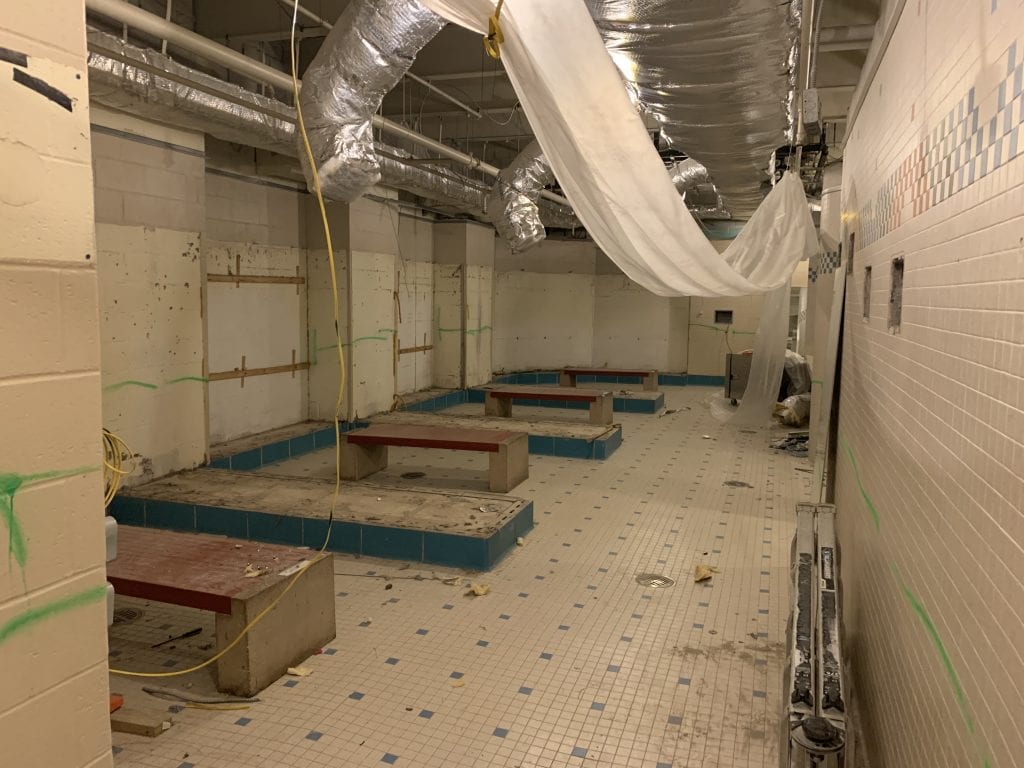 According to Bob Palmer, Director of Plant and Facilities for the town, the $1.733 million construction project, which had been planned for and budgeted for several years, was paid for through the town’s Building Improvement Fund and financed through bonding. Another $61,000 was spent on design costs.

Cornerstone opened in 1961, and the last time the locker rooms had any renovation work done was in 1991, when the lap pool was built, Kerrigan said. Structural issues had arisen with the floors, which led to the need for complete reconstruction.

“It was something that was in the works to start last spring,” Helen Rubino-Turco, director of West Hartford’s Leisure Services Department, said of the reconstruction project. “If we’d have know what would happen with the pandemic, we would have started earlier.”

Along with other town recreational facilities, Cornerstone initially closed in March 2020 due to the coronavirus pandemic and reopened in September.

Since the pool was already closed, the work caused less disruption to the public use of the facility than it would have otherwise. The dustiest and loudest part of the project was done over the summer, and when the pool itself reopened, the locker rooms remained closed with a “tunnel” from the front doors of Cornerstone to the pool area. Temporary changing rooms were built on the pool deck area, Kerrigan said.

Rubino-Turco said the contractor chosen through a competitive bid process, LaRosa Construction Company, as well as the designer, Al Jacunsky of Jacunsky Humes, were great about sequencing the project to minimize disruption, particularly when it came time to reopen the pool.

The design work was completed in the spring, and the construction began as soon as possible thereafter in July.

The locker rooms – which include separate facilities for men and women, plus a family changing room area – now have all new electrical wiring, plumbing, tiles, and dispensers, in addition to new showers, sinks, toilets, and lockers.

When the old floors were removed, Kerrigan said you could see straight through down to the basement. 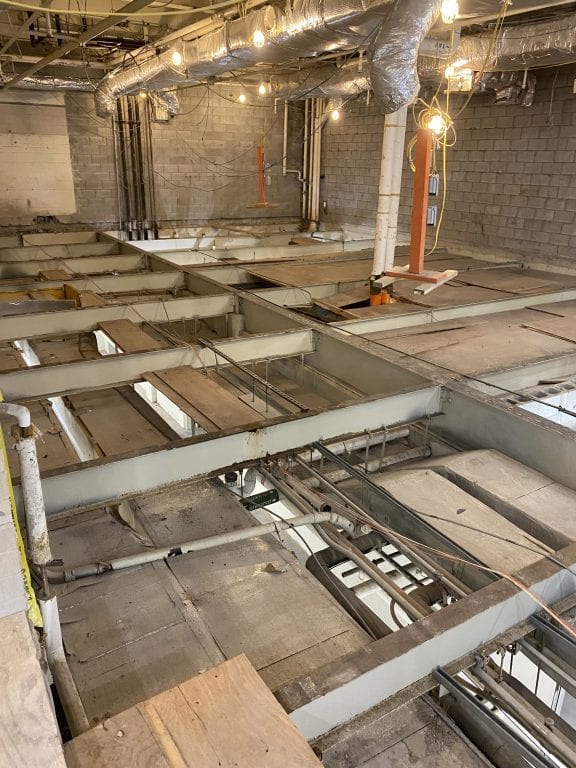 During the construction, there were six dumpsters taking up half the parking lot. They were finally removed in January.

Additional photos of the completed work, as well as some of the construction in progress, can be found below.

Although the pool is open, and the locker rooms are now available for the public to use, the facility continues to operate on a very restricted basis due to COVID-19. Only one person per lane is permitted at any time, and lane reservations – which are for staggered times – must be made in advance.

Private lessons can be held, he said, but the instructor is required to wear a mask and a shield, even when in the water.

The high school girls swimming and diving season was held in the fall, and ran smoothly despite the restrictions, Kerrigan said.

Boys swimming and diving practices began on Jan. 19, and Kerrigan said the Connecticut Interscholastic Athletic Conference (CIAC) and Centers for Disease Control and Protection (CDC) guidelines permit up to four students per lane for practice.

In addition to West Hartford’s Conard and Hall high schools, teams from Kingswood Oxford, Avon, and Farmington high schools use the pool for their swim teams, as do the private club WHAT and the Cornerstone Diving Team. The organizations all have their own protocols.

High school meets begin this week, but spectators will not be permitted at this time, Kerrigan said.

“When COVID restrictions are lifted, we will promote new memberships,” Kerrigan said. Right now, Cornerstone is not accepting new members because the schedules for using the lanes already fill up well in advance.

In addition to the pools, Cornerstone also has fitness facilities. Group fitness classes such as Zumba remain on hold, but members can reserve time to use the small gym, Kerrigan said.

“We continue to operate based on the recommendations we get from the health director and the state,” Rubino-Turco said. Any changes to the procedures are approved through the town’s municipal recovery team.

“It’s still limited use, but Cornerstone has done a really good job with ways to engage the membership,” Rubino-Turco said.

Last summer, when the Town of West Hartford made the decision to open two of its outdoor pools, Cornerstone remained closed while the construction was underway, but many staff were able to remain employees by staffing the outdoor facilities.

There have been previous upgrades made to the 60-year-old Cornerstone facility, Rubino-Turco said, and the investments have been made in stages. The roof, air handlers, lobby, and fitness rooms have previously been renovated.

At some point, she said, it may be necessary to redo the facility’s original pool. 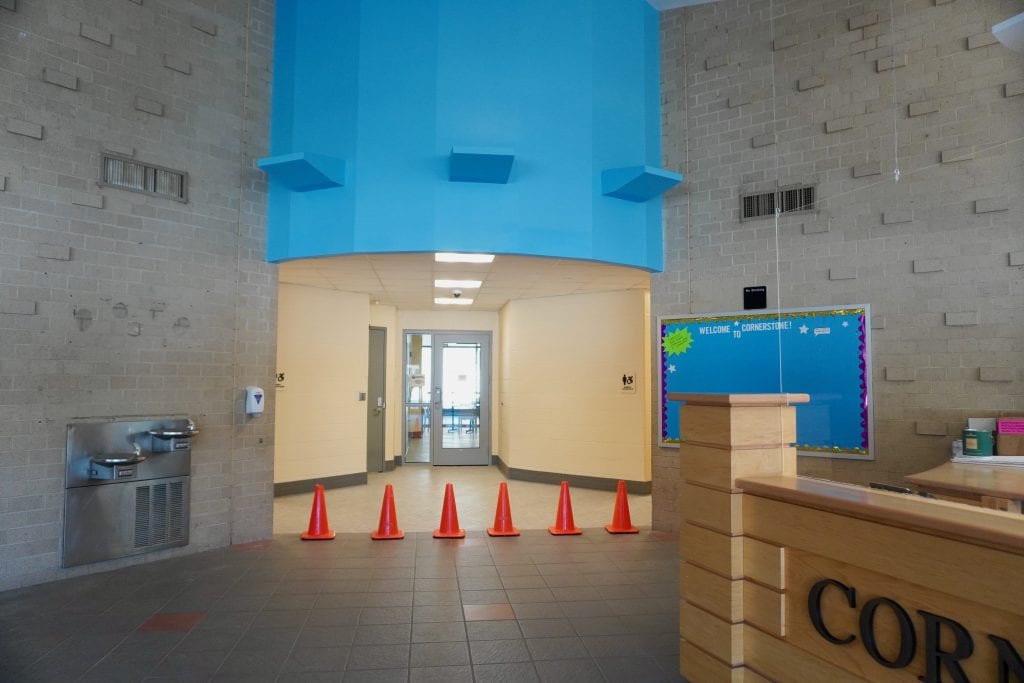 The area beyond the cones is where renovation at Cornerstone took place for the past seven months. Photo credit: Ronni Newton 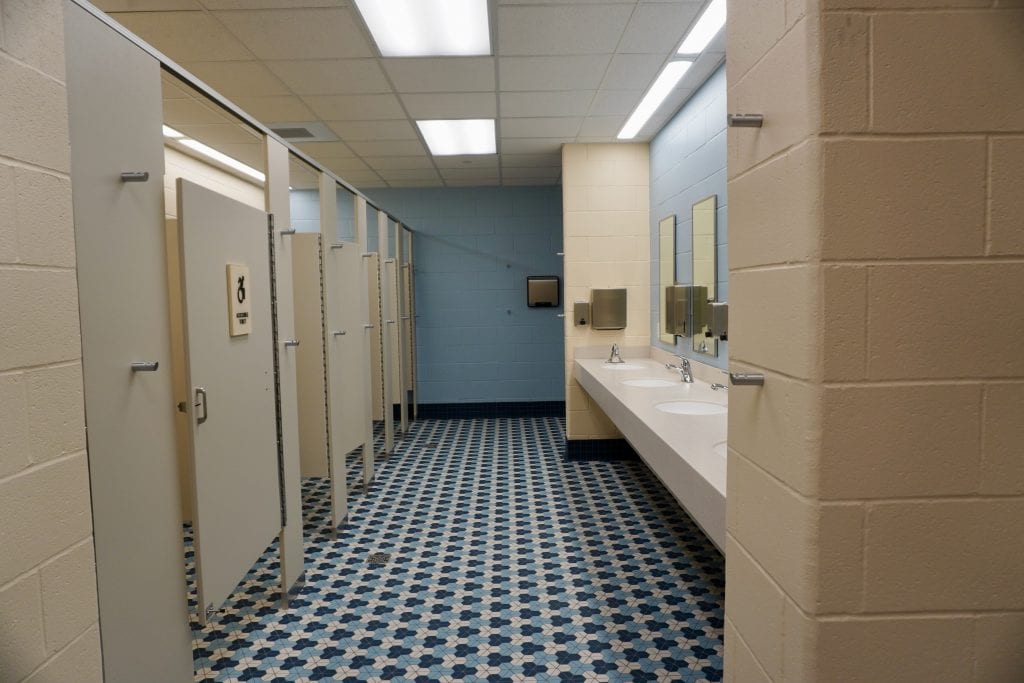 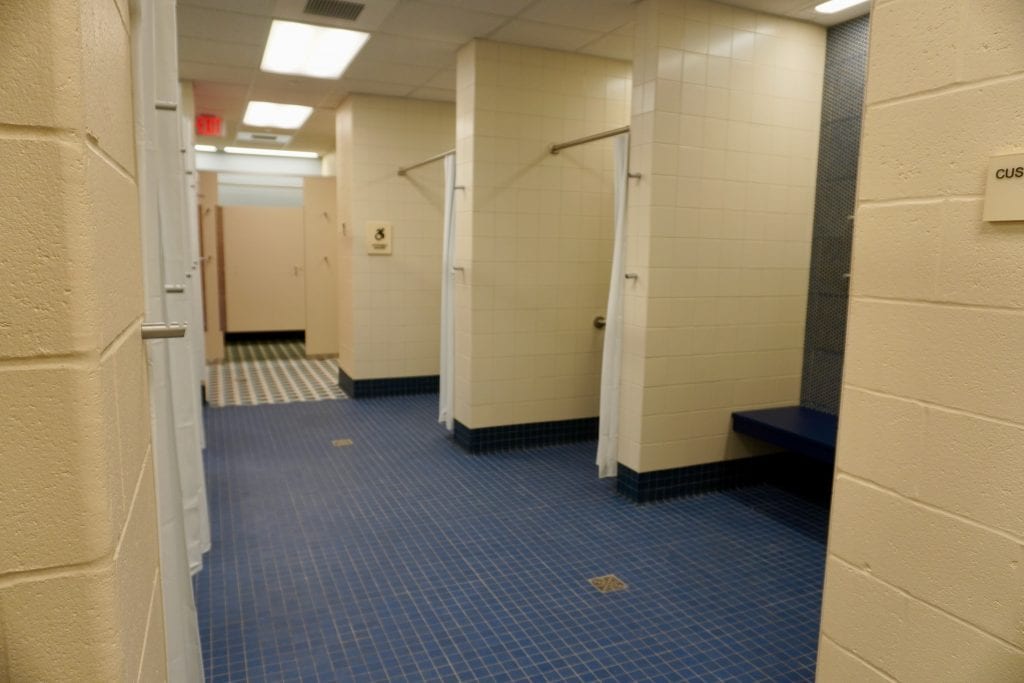 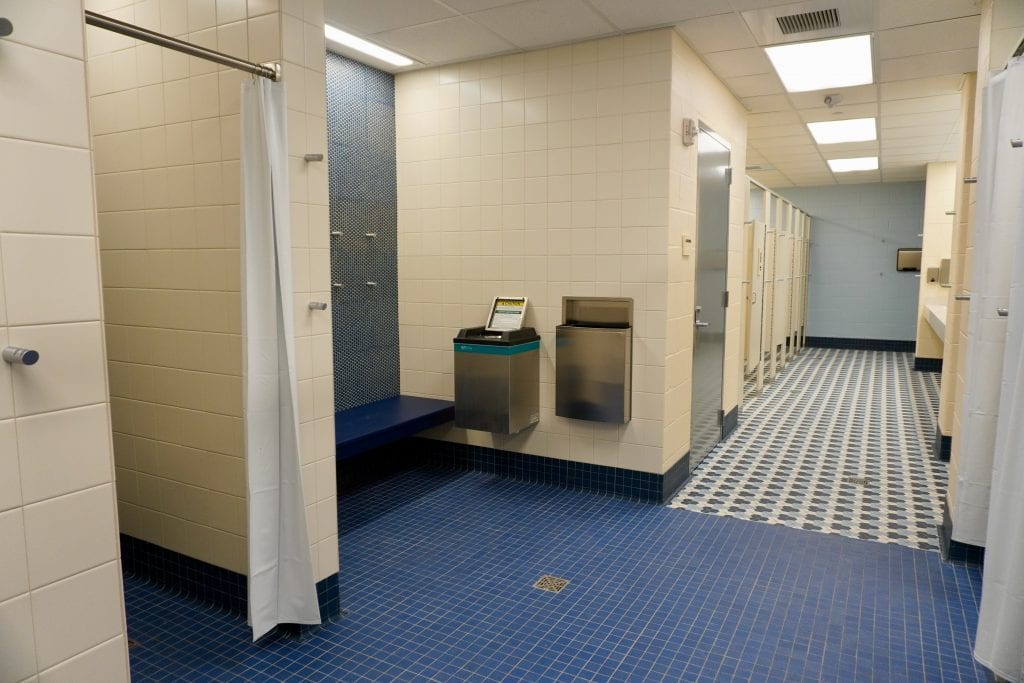 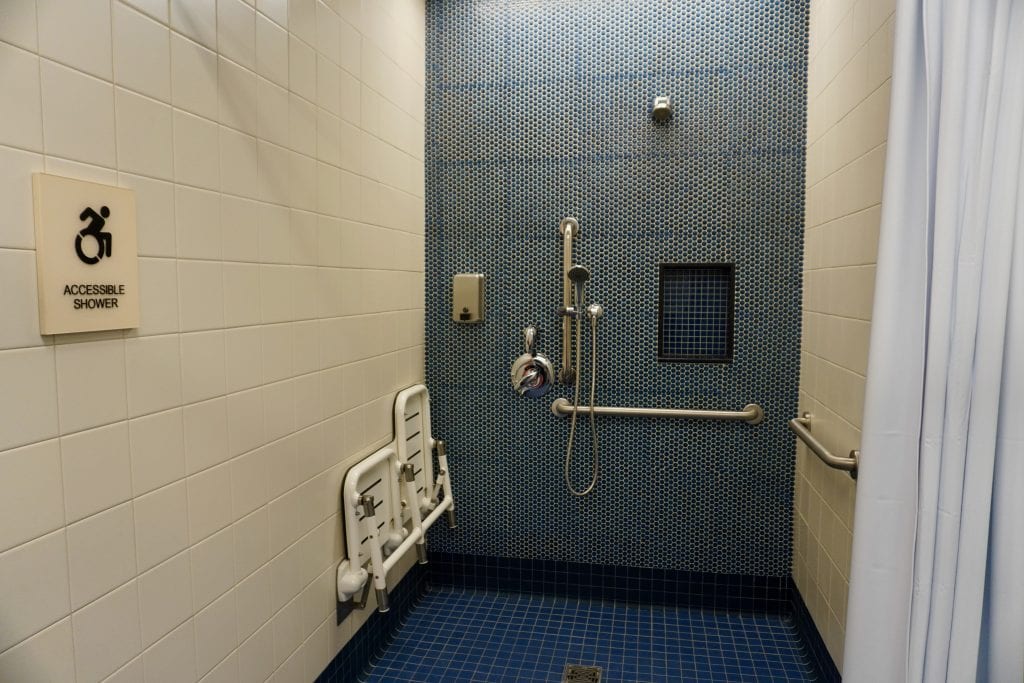 Completely new showers have been installed in the locker rooms at Cornerstone. Photo credit: Ronni Newton 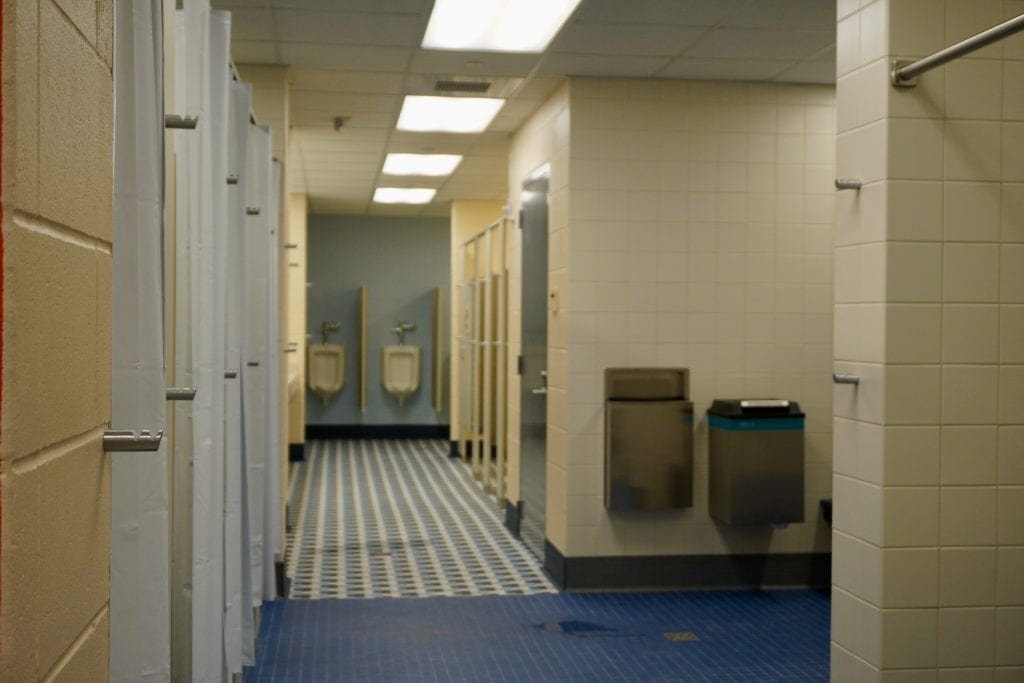 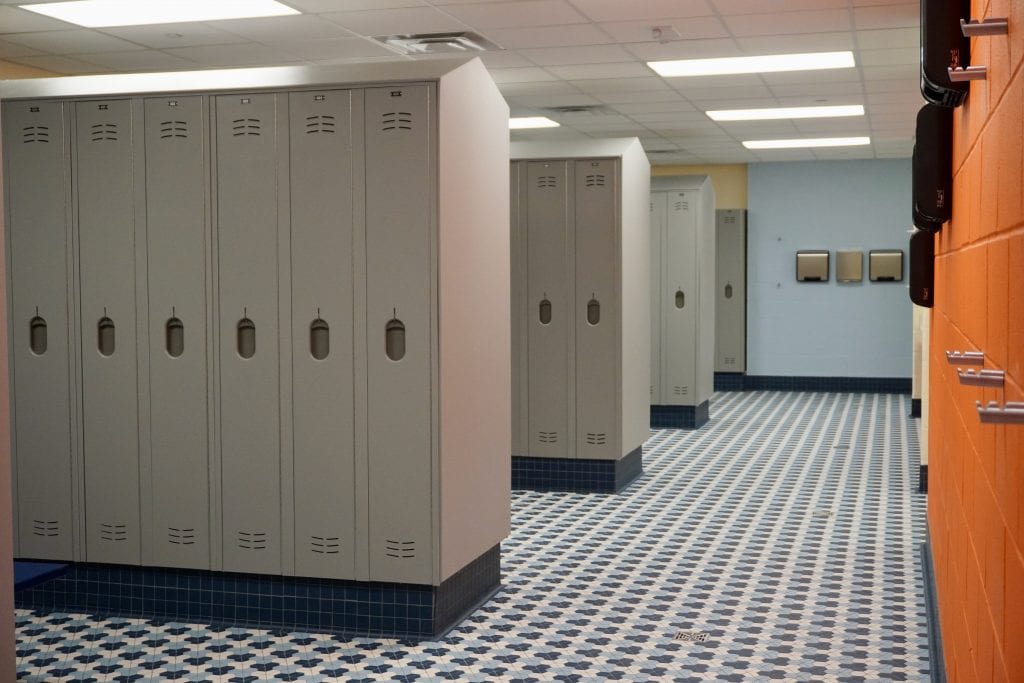 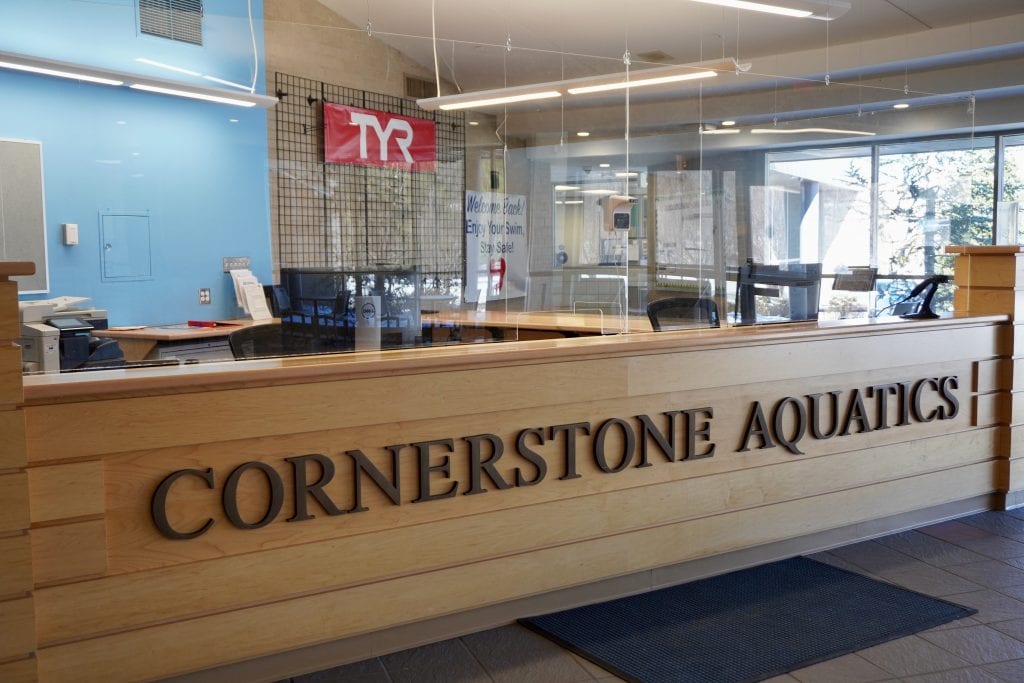 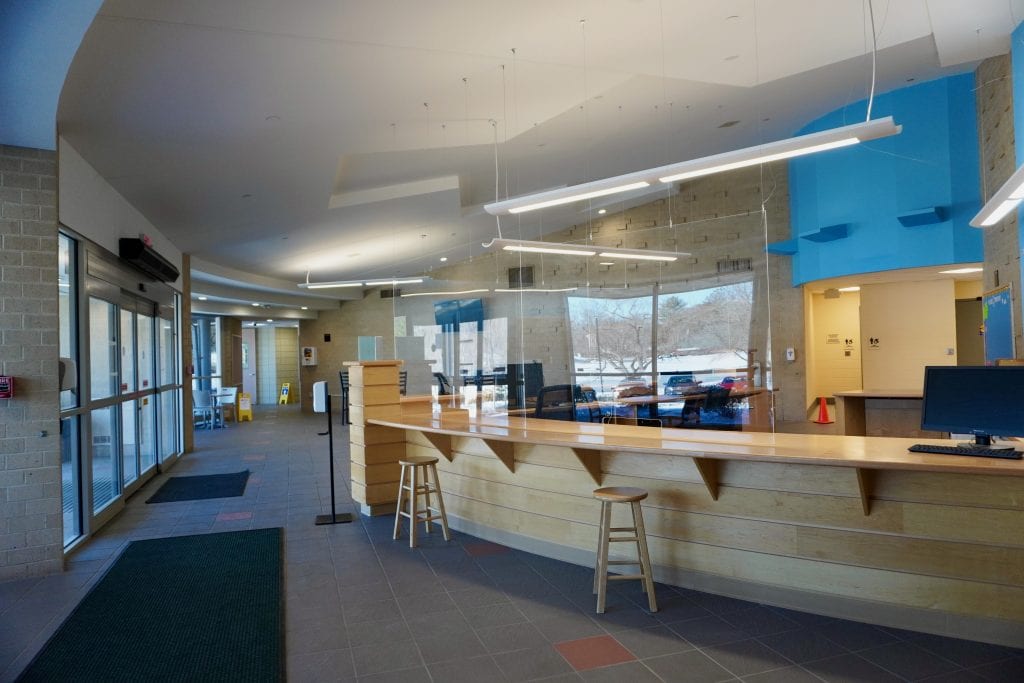 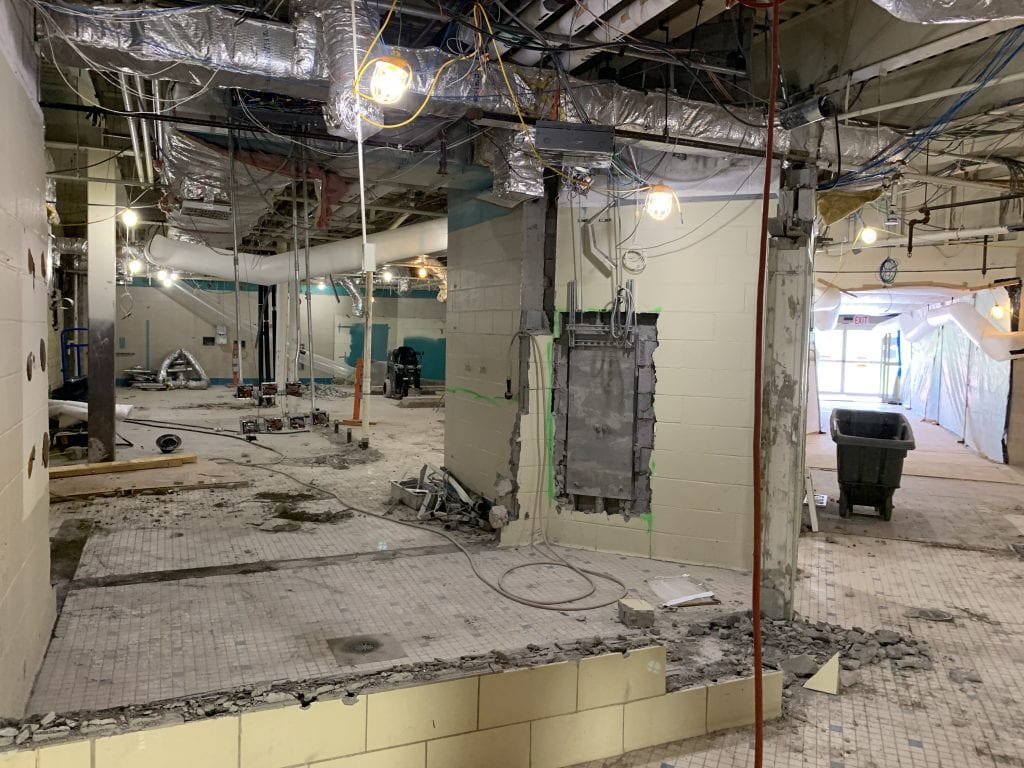 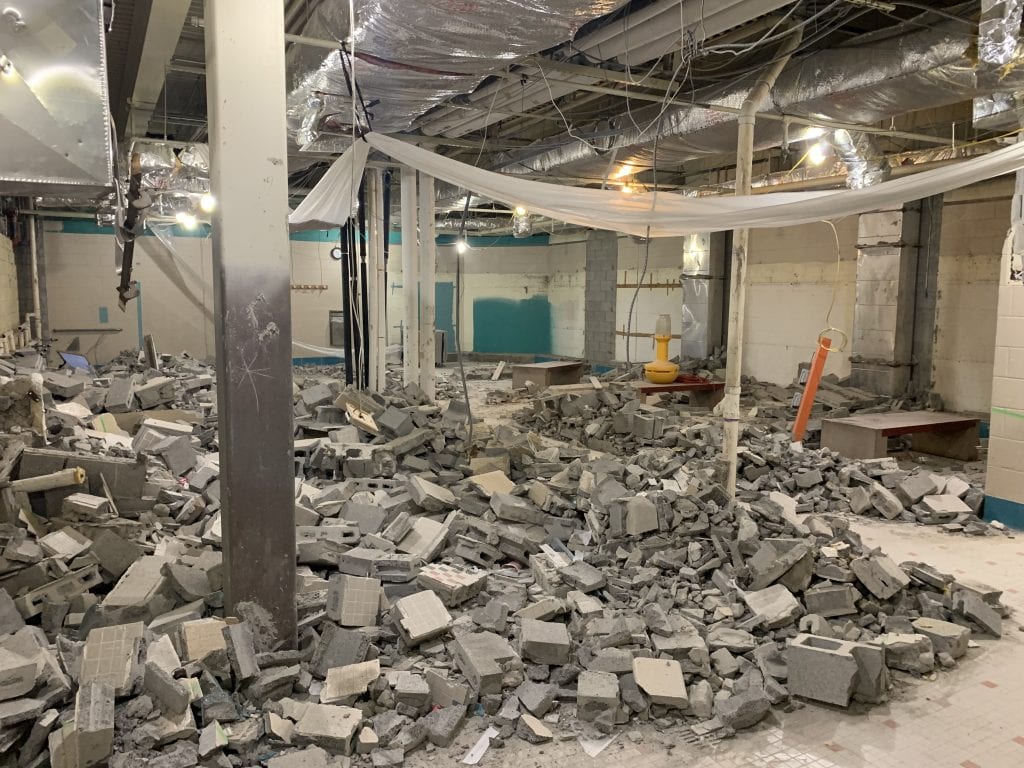 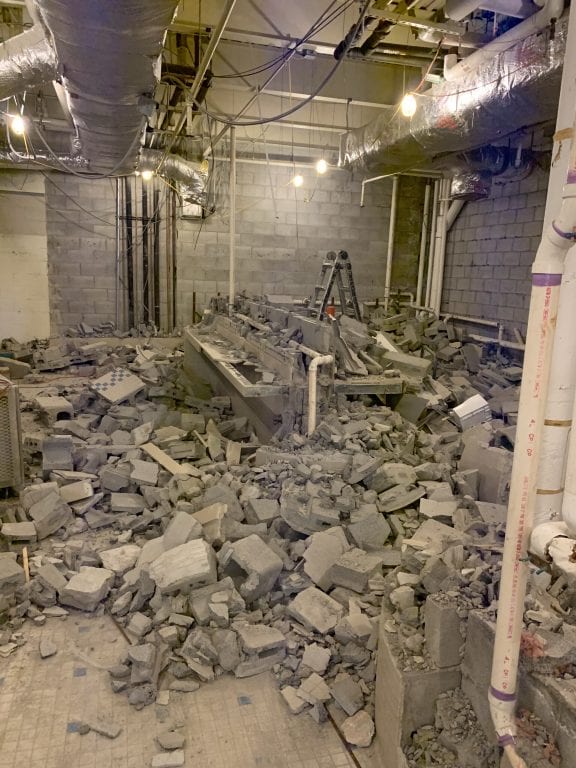 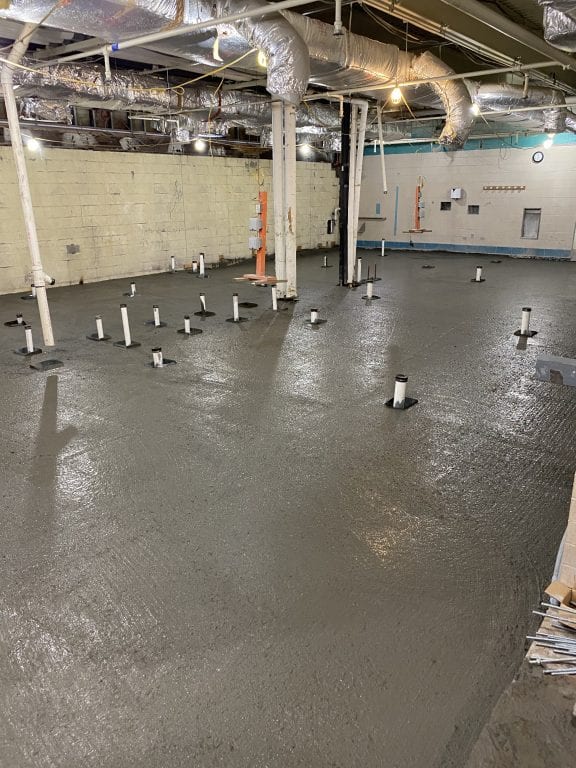 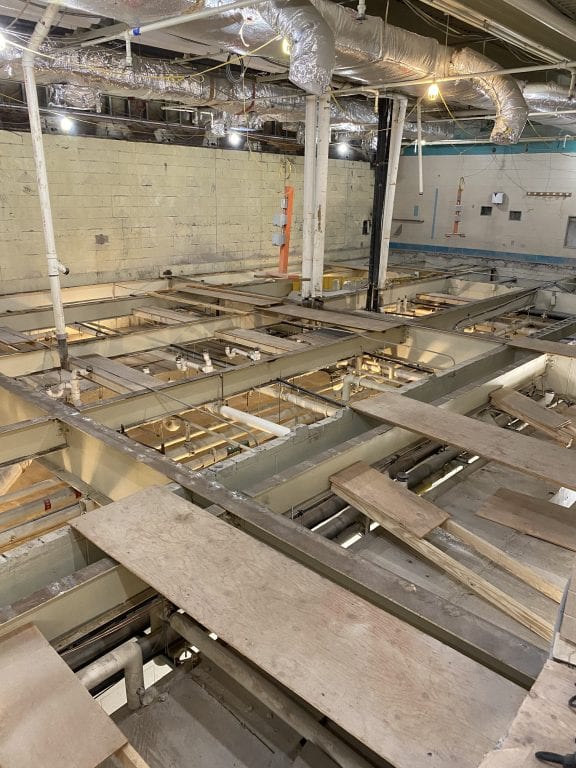 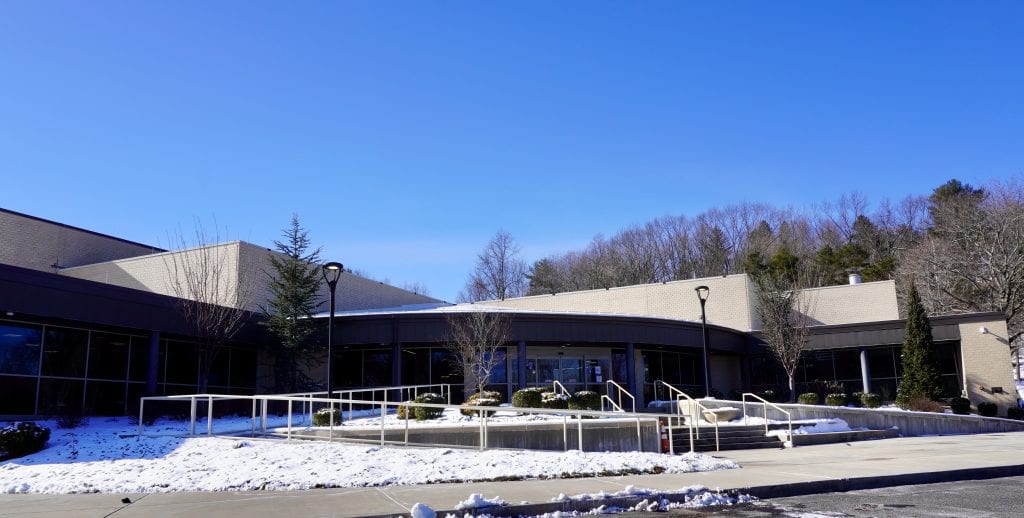