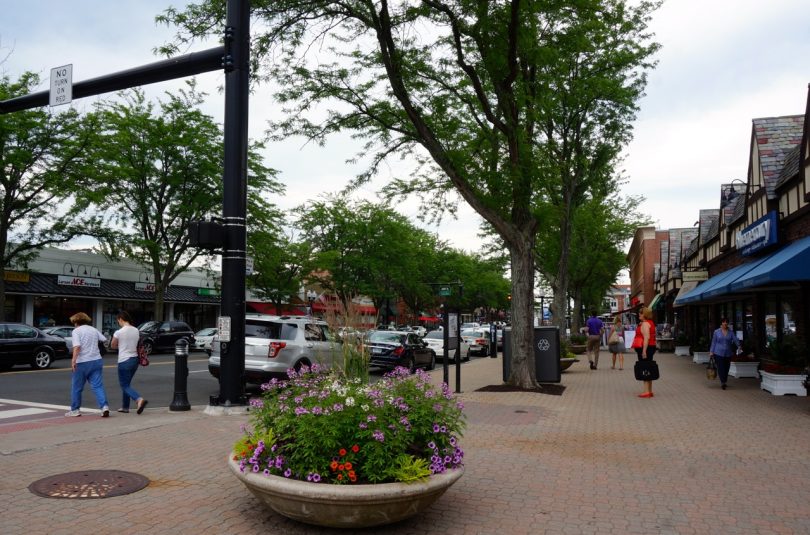 Statement and guiding principles will be used to evaluate future development opportunities in West Hartford Center.

Editor’s Note: This article first appeared in the June 29, 2017, edition of The West Hartford Press. For more weekly news, pick up a copy of the Press or visit turleyct.com.

The Town Council formally adopted a Vision Statement and Guiding Principles for the Central Business Zoning District for West Hartford Center at its meeting last week.

The statement and principles will be considered by the Council “when evaluating any future development within the BC zone in West Hartford Center and town staff will communicate the vision statement and guiding principles to any Center BC zone property owner considering redevelopment or new investments,” the resolution approved at the June 27 Council meeting reads.

After months of working group meetings, public outreach, and surveys to gather feedback, the Town Plan and Zoning Department presented its findings regarding public opinion of future development in West Hartford Center to the Town Council’s community planning committee in May.

The review of the town’s Central Business District zone came about following the failure of two zoning ordinance changes before the Town Council. Both had to do with density in the BC zone.

An ordinance amendment brought forth to make way for new development in West Hartford Center was denied by the Town Council in September of last year following significant pushback from residents.

The request, brought forth by Lexham Private Investors, LLC, was to change a building’s maximum allowed floor area ratio from 1.25 to 1.5 for a development in the BC zone – which encompasses the Center and an area of Elmwood – as part of a special development district application.

Although several buildings in the Center were constructed prior to the current ordinances, and therefore already exceed the allowed FAR, such as the building on the corner of Farmington Avenue and South Main Street that houses Bruegger’s Bagels, many residents raised concerns with the type of large structures that may be approved if the FAR were increased.

A similar, though much more broad, ordinance change was proposed by the town in April of 2016 to permit an increase in density in the BC zone from a FAR of 1.25 to 1.75, as well as to allow an increase in building height to five stories if residential in nature. Additionally, that ordinance change would have excluded a private parking garage area for residential, commercial tenants, and patrons and guests from the maximum FAR calculation.

That proposal was ultimately withdrawn after public hearings, at which time the council promised a study and community outreach on the topic before bringing it forward again.

The Town Council then passed a resolution in October of 2016 establishing the working group of neighbors and property owners to examine the zoning possibilities in the Center.

The study and resulting Central Business District Planning Initiative were done with the help of consultant Fitzgerald & Halliday. The effort was focused on the Center and the BC zone, as well as the neighborhoods adjacent to the Center, Town Planner Todd Dumais explained to the committee in May.

A public forum, held in February, attracted approximately 100 people to discuss strengths, issues, and ideas regarding business and property uses, architecture, parking and mobility, and open space and the pedestrian realm.

More than 700 people responded to an online survey about the Center and future development.

Respondents noted a variety of reasons for which they visit the Center, most popular of which were dining, shopping, and usage of the library and Town Hall. Most said they arrive by car, though 326 respondents said they arrive on foot or by bike.

Nearly 80 percent of respondents lauded the pedestrian nature of the Center, the mix of restaurants, and perception of safety, as well as shops and services, while parking and the night life were least favorable things about the area.

Still others called for free parking or a better mix of offerings, including more retail, as well as more artistic offerings to draw an eclectic crowd.

The Town Plan and Zoning Department crafted and released a draft Vision Statement and Guiding Principles for the Center, for which an online survey was also conducted to solicit feedback. Roughly 90 percent of respondents supported the statement.

The Vision Statement reads: “Ensure West Hartford Center remains a great place for visitors, residents and business investment that fosters a strong sense of community. The Center is at the geographic heart of the town and must remain a place that accommodates shopping, dining, leisure, work, housing and governmental services, in an architecturally, economically and socially diverse and pedestrian-friendly environment. To continue as an economic driver and attractive part of the community, the Center must continue to be well-maintained, comfortable, and safe for people of all ages, incomes and backgrounds at all times of the day. The attractive look and feel of the Center and its integration into the surrounding neighborhoods is a unique strength and benefit to the town.”

Guiding principles include enhancing the area while preserving the existing open feeling and natural light, encouraging appropriate development and redevelopment consistent with the existing character of the area and current commercial boundaries, managing traffic and parking to reduce impacts on surrounding neighborhoods, embracing the Complete Streets movement, encouraging growth and retention of diversity among businesses to attract visitors from throughout the area, serving all age groups, encouraging the development of additional functional open space, and continuing to embrace neighborhood outreach and engagement.

Director of Community Services Mark McGovern called the process to solicit feedback and develop the statement and principles “very successful” when presenting the matter to the Council Tuesday night.

The resolution allows the Council to “memorialize” the findings, and solidify them as a tool for future development use, he said.

While the statement and principles will not be added to the town’s Plan of Conversation and Development right now, McGovern said in response to a question from Minority Leader Denise Hall that it “gives us a great head start” on an update to the POCD that is slated for 2019.

“We certainly will be using this as a stepping stone,” he said.

Ben Wenograd, the chair of the Community Planning committee, thanked McGovern, town staff, and the committee for work on the process.

“It doesn’t show on the resolution, but the amount of public participation we had in this was really great,” he said. “Everybody has a really strong opinion about every part of the Center.”

Mayor Shari Cantor noted, “We’re not going to please everybody,” but said change is inevitable, and that the process conducted by the town will help the Council have “understanding of some of the critical elements,” when making decisions regarding development in the future.