Residents and members of the West Hartford business community had the opportunity to provide input Tuesday night during two public forums about the central business district. 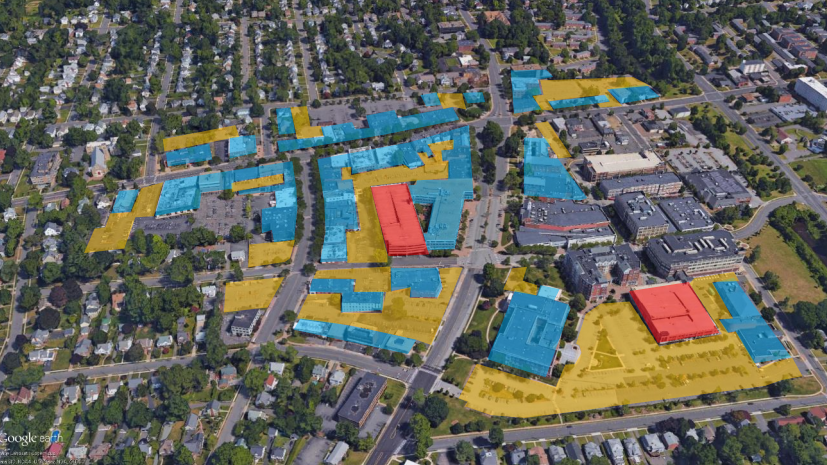 The Town of West Hartford is continuing the process of reviewing zoning and density in the Center, and Tuesday night held two forums to give the public the opportunity to brainstorm and provide input. 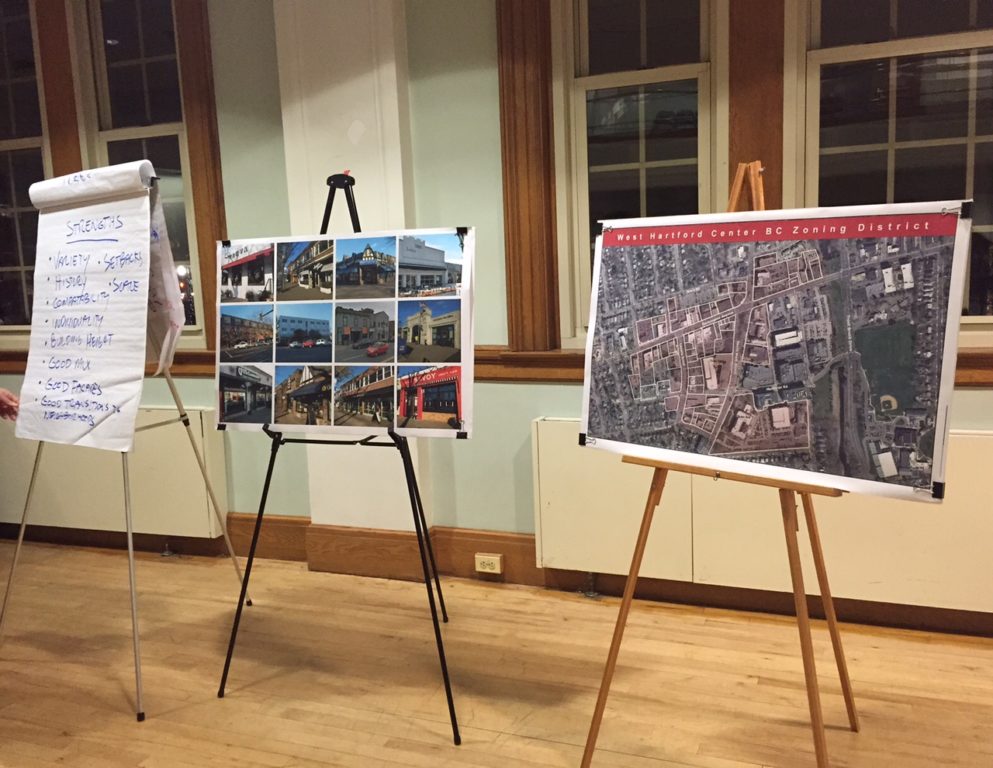 A working group, that includes West Hartford Center residents, property owners, and town staff, has already held three meetings to discuss and review current zoning ordinances in the BC (central business district) which encompasses much of the Center. There are also several properties outside of the Center, such as the Armory Building on Farmington Avenue and parts of Elmwood, that are zoned BC, but the forums were focused primarily on the Center.

Town Planner Todd Dumais said that over the past several weeks more than 600 people had already responded to an online survey regarding their vision for “the Center of today and the Center of tomorrow.” There were 60 people who attended Tuesday’s 6 p.m. forum, and about 20 more who attended the 7:30 p.m. session.

Engaging the public and obtaining input through forums like those held Tuesday is one of the tasks of the working group. “What we’re hoping to get enough input to create a new vision,” said Dumais. He is hoping to craft a set of “guiding principles” to assist the Town Council as they consider development plans for the Center.

In October, the Town Council passed a resolution establishing the working group to review zoning regulations in the central business district. That move came after the Town Council had rejected two separate proposals regarding increasing the floor area ratio (FAR) in zone BC. Both proposals – one submitted by the town and another submitted by property owner Lexham West Hartford LLC, had been the subject of lengthy and well-attended public hearings.

Planning and environmental consultant Fitzgerald & Halliday, Inc., which has been engaged by the town to support and advise the working group, facilitated the forums, beginning with a presentation that explained exactly what the current BC regulations are, and provided comparisons between West Hartford and other local and regional cities and suburbs.

Fitzgerald & Halliday Senior Project Manager Francisco Gomes said that the town’s own Plan of Conservation and Development, completed in 2009, has been used as a guide. That document already anticipated that growth would bring challenges, and indicated that “vibrancy” as well as “new urbanism” – keeping the Center friendly for “bikes, pedestrians, and all types of users and modalities” – had been identified as important themes when the plan was crafted.

Gomes said that trends affecting town centers, including West Hartford, include a changing retail environment. While e-commerce is still less than 10 percent of all retail business now, he said, its growth is outpacing traditional brick and mortar retail by about 2 to 1. Other trends include a population shift to towns and cities, and a shift to non-automobile transportation.

“People are going to want to live closer to it or in it,” Gomes said about the Center. The “mom and pop” brick and mortar businesses will not be regained, and the shift to service-oriented businesses, like restaurants, will continue.

The factors that make a town a great place, Gomes said, are “sustenance, security, comfort, stimulus, and connectedness,” and West Hartford is a great place. “Most important are these tenets that the Center needs to hold onto moving forward.” 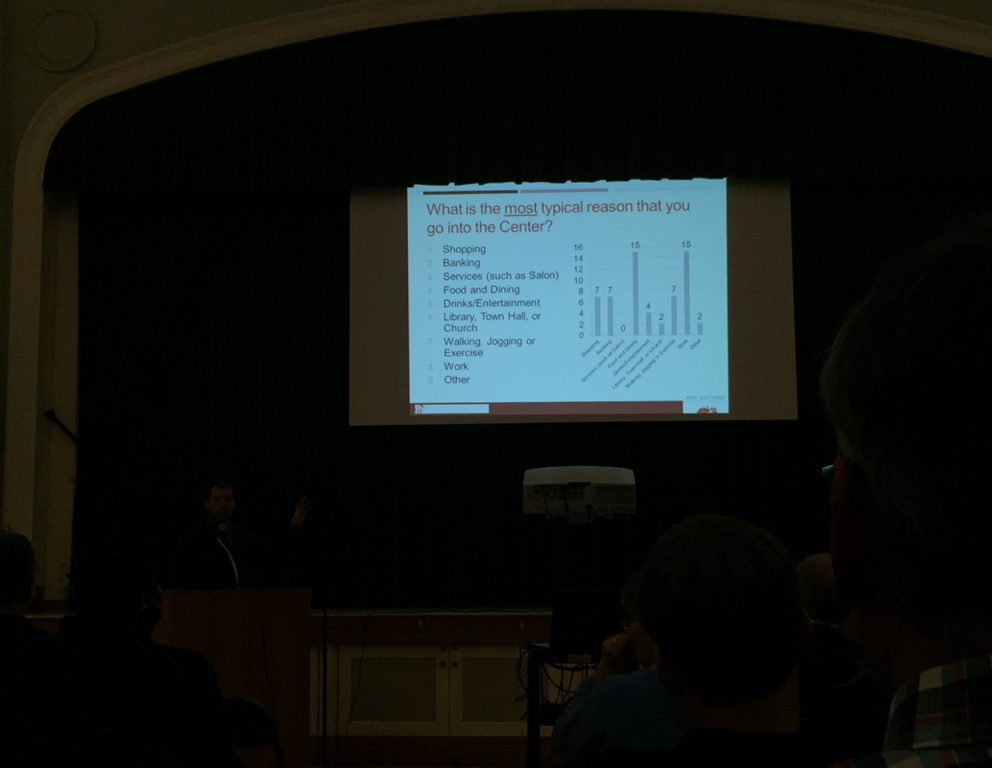 The audience used clickers to participate in a survey – similar to the online version that many had already taken – with the results tabulated immediately on the screen.

A desire for more retail shops in the Center was indicated as a key goal by those voting. Chief concerns included the mix and variety of businesses in the Center, as well as traffic and parking.

Thirty-two of the 60 respondents voted that they hope to see the Center “grow and change, but incrementally.” An overwhelming majority rated the current Center as “good” or “great.”

A desire for more bike-friendly access was noted by several participants. “Parking itself is not user-friendly,” remarked one resident, and others agreed that signage about parking is lacking.

Ideas included discounting parking fees for West Hartford residents, or making parking less expensive during the day to encourage retail business. A concern about losing parking spaces was expressed if existing surface parking lots were to be developed.

Wide sidewalks, trees, and connectivity to neighborhoods were cited as positive “open space” factors, but concerns include noise and litter from the late-night crowd. Closing off parts of streets to create a pedestrian mall like Faneuil Hall in Boston was also a suggestion.

A balance in types of businesses to not be so restaurant-heavy, and the variety of available residential property were noted as concerns by participants in the property use breakout group. John Green, president and CEO of Lux Bond & Green which has a location on LaSalle Road, suggested that retail businesses should do a better job of coordinating the hours that they are open.

“Ideal is always a work in progress. Restaurants built the Center,” said Barry Pickett, a 31-year resident of West Hartford who lives outside of the Center between Fern and Asylum. His wife, Sally, said she is interested in businesses that “support a pedestrian-friendly atmosphere.”

Many voiced concerns about the late-night transition of restaurants to a more bar-like atmosphere.

Most participants seemed to have a positive view of the Center’s architecture, using terms like “character” and “charming” to describe the mix of styles. Many also liked the “loose conformity” that avoids a cookie cutter look.

There were concerns, however, including a few buildings that were described as “eyesores.” Michael Keating suggested tax credit for upgrades to façades, and Elisabeth de’Ath said she would like to see better integration between the Center and Blue Back Square.

The next step will be to reconvene the working group to discuss the results of the forums and the online survey, and another public forum will also be scheduled before any proposals are made to the Town Council.

The group’s recommendations may end up being about more than zoning, Dumais said. “We are looking at a vision statement for the Center – looking at the Center as a whole.”