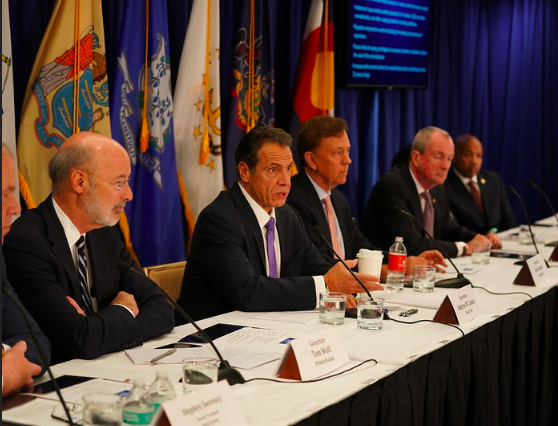 In addition to discussing a common framework for legalized recreational marijuana, the governors reached a consensus supporting a ban on flavored vaping as a public-health measure.

A multi-state summit on cannabis and vaping attended Thursday by the governors of Connecticut, New York, New Jersey, and Pennsylvania is likely to produce a regional effort next year to ban the sale of flavored vaping products and legalize recreational marijuana.

Gov. Ned Lamont said the governors reached a consensus supporting a ban on flavored vaping as a public-health measure and agreed on the desirability of a common framework for how marijuana could be sold, taxed and otherwise regulated if it is legalized –  a step that has proven politically difficult absent initiative referendums.

The goal of the summit in Manhattan was to explore model legislation that could be debated in each state next year, not a multi-state compact committing them to passage of a specific bill. It was convened by Lamont and New York Gov. Andrew M. Cuomo, who have met twice in recent months on regionalism.

“The goal is to collaborate with one another, to share resources and think collectively as we all try to figure this out,” Cuomo said.

“We just want to make sure we go in with our eyes wide open and we are consistent,” Lamont said.

Representatives of Rhode Island, Massachusetts and Colorado also attended. The sale of recreational pot is legal in the latter two states, and Ean Seeb, who advises Colorado Gov. Jared Polis on cannabis issues, talked to the governors about the Colorado experience.

Connecticut passed a law in 2019 that raises the age for tobacco and vaping purchases to 21, and Abrams said she supports legislation curbing the growing popularity of vaping among young people. Abrams said a multi-state effort based on shared research and best practices could ease the passage of new restrictions on vaping.

“It is a public health crisis for our children,” Abrams said. “They have been targeted, and we are up against a business making billions of dollars.”

The legalization of recreational marijuana has proven to be more difficult in states without the ability to pass laws by referendum. Only Vermont and Illinois have passed legalization laws solely through legislative action, and the Vermont law is limited. It legalized possession and growing for personal use, but not retail sales for non-medicinal purposes.

“It is probably one of the most challenging issues that I know I’ve had to address in the state of New York,” Cuomo said “It is complicated, it is controversial and it is consequential. That is a very difficult and challenging combination.”

The regional approach is unusual, but it is unclear if it will change a political dynamic in any of the states represented Thursday. Cuomo said he believes the public supports legalization.

“This is a challenge for all of us,” Cuomo said. “There is a desire to do this. I believe the people of this state and our surrounding states have a desire to do it, but the old expression – the devil is in the details. How you do this is all the difference.”

Aside from opening remarks, the summit was closed to the press.

“I think it was important to the governors to be able to think out loud,” Lamont told reporters later in a conference call.