West Hartford businesses, like businesses throughout the country, have been forced to close and are awaiting instruction from the state about when they may be able to reopen. Photo credit: Ronni Newton

Connecticut’s economy likely will re-emerge from the coronavirus pandemic in small steps, beginning in June and continuing throughout the year.

Connecticut’s economy likely will re-emerge from the coronavirus pandemic in many small steps, beginning in June and continuing throughout the year, Gov. Ned Lamont’s chief advisers predicted Thursday.

And each stage will almost certainly be preceded by widespread testing, and confirmed with more health assessments in all communities, before the next level is attempted, said Indra Nooyi and Dr. Albert Ko, co-chairs of the governor’s Reopen Connecticut Advisory Group.

The administration also announced at its daily briefing Thursday that 95 more residents died and 631 more tested positive for COVID-19 in the last day. But hospitalizations were down slightly and officials said the pandemic might have reached its peak in Fairfield and New Haven counties. It is still intensifying in Hartford County and eastern Connecticut.

Through Thursday morning, Connecticut has recorded more than 10,000 cases in Fairfield County and more than 6,060 in New Haven County. Hartford County had just over 4,300 cases, while Tolland and Windham counties combined had only 488. Litchfield, Middlesex, and New London counties also had been hit less hard, with 751, 545 and 419 cases, respectively. 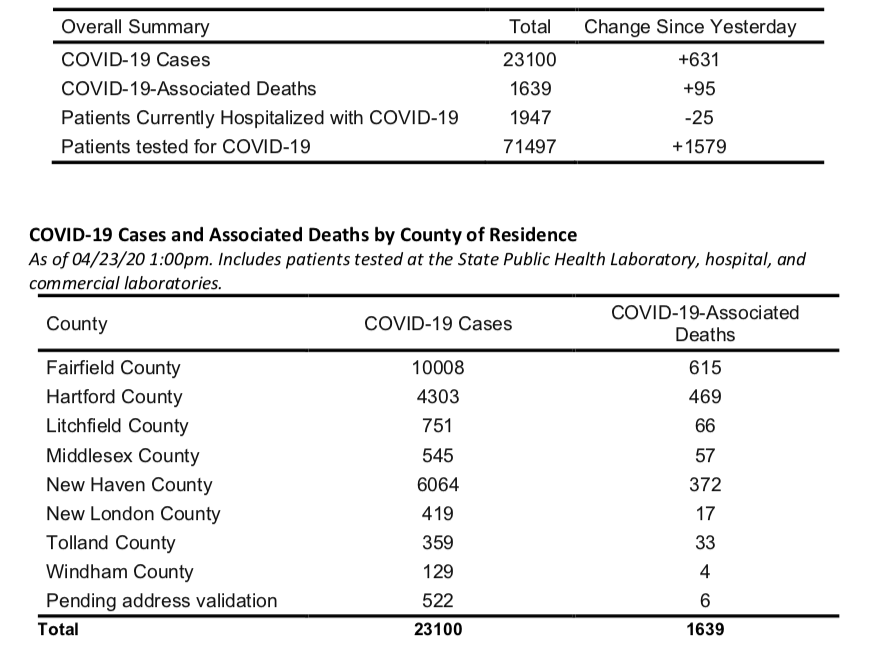 “We are never, ever, not going to focus on public health,” said Nooyi, former chairwoman and CEO of PepsiCo whose advisory panel will submit a re-entry strategy to Lamont on May 20.

The governor has used a series of executive orders since the pandemic struck Connecticut hard in mid-March, closing many non-essential businesses, while limiting others only to delivery and drive-up service. Schools also are closed at least through May 20 – though Lamont has said the school year may not resume at all – and the General Assembly adjourned early.

Nooyi didn’t suggest which restrictions might be eased first, but outlined how a progression would develop.

Any plan would begin with a candid assessment of both infection rates, expansions of testing capacity, and ongoing efforts to safeguard the state’s most vulnerable populations, such as nursing home residents.

The advisory panel also is analyzing commerce and traffic patterns, both in Connecticut and in the Northeast, Nooyi said, noting that expanding economic activity in one region likely will lead to increased travel between that section of the state and several others.

“We need a robust detection and surveillance system to inform us and guide us,” said the panel’s other co-chair, Dr. Albert Ko, professor of Epidemiology and Medicine at the Yale School of Public Health. “We need to test intensively.” Otherwise, he added, it only increases the likelihood Connecticut slips into a second, dangerous coronavirus surge that again threatens to overwhelm its healthcare system.

Lamont said 23,100 residents had tested positive and 1,639 had died from the coronavirus through Thursday morning. Another 1,579 individuals had been tested, bringing the statewide total to nearly 71,500.

Currently, about 30% of all tests came back positive, Ko said, adding that lifting of economic restrictions likely wouldn’t happen until the ratio was closer to 10% – and until frequent daily testing showed that level was steady or shrinking. 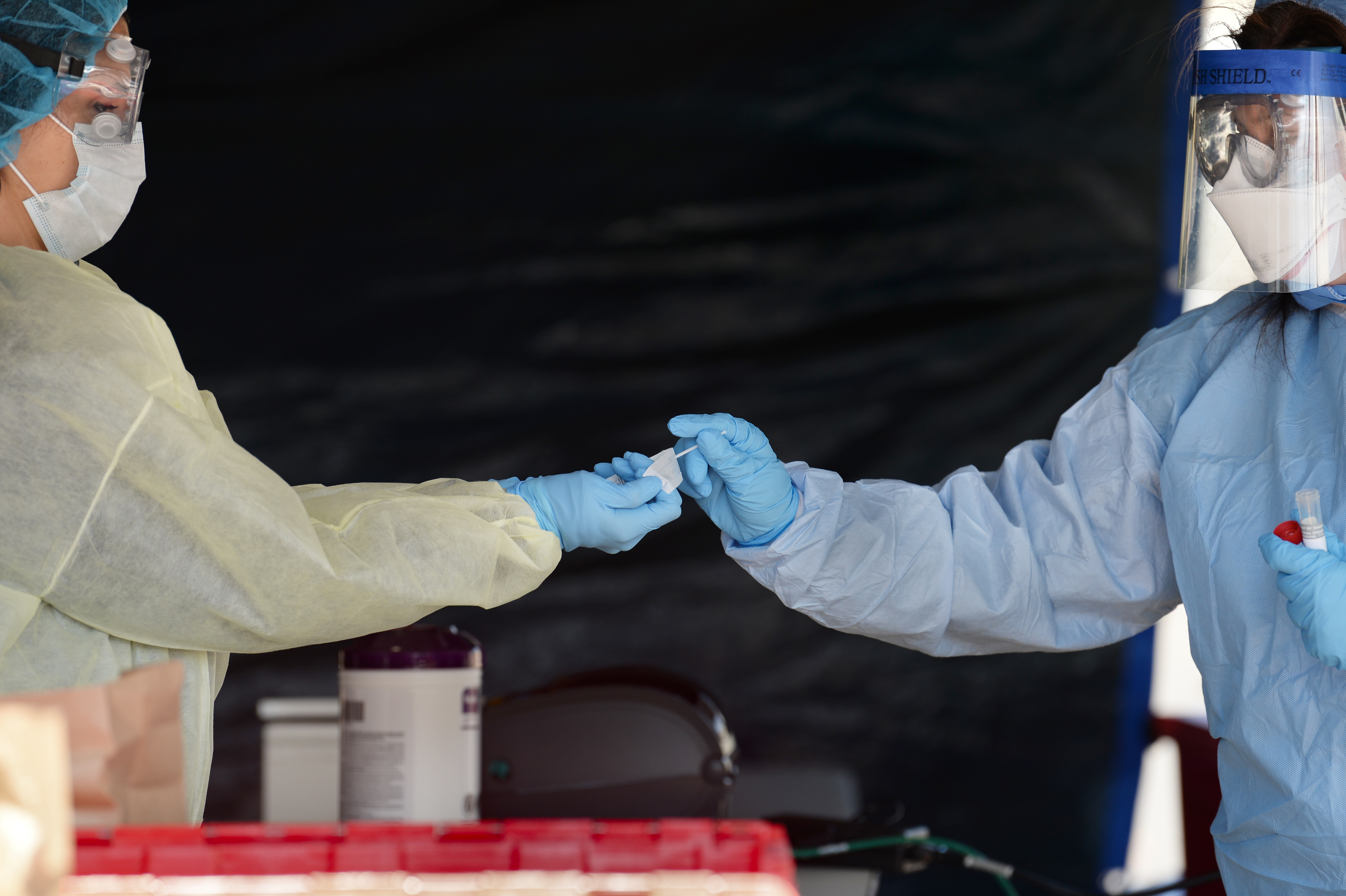 Connecticut, like most of the U.S., has struggled to increase its testing capacity. And Ko warned that the swabs used to sample the back of patients’ throats now are in short supply.

The reopening strategy could hinge, Ko said, on the efficiency and effectiveness of the recently introduced saliva test.

Researchers at Rutgers University led a team that developed this test, which involves collection of a sample spit into a tube. The U.S. Food and Drug administration authorized the saliva test for “emergency use” in diagnosing COVID-19 earlier this month.

Nooyi added that the panel’s research also has included reviewing every other country that has faced coronavirus-related lockdown and economic re-emergence.

“There isn’t a clear playbook that’s emerged,” she said. “What we’re learning is what not to do.”

Connecticut has made some progress in the meantime attacking its shortage of personal protection equipment [PPE]. Josh Geballe, Lamont’s chief operations officer, said the state received a shipment of 2 million surgical masks Wednesday, and has made 20 deliveries so far to state agencies, nursing homes and others in need.

Geballe added that state health officials also are continuing their visits to all nursing homes to assess their PPE and other needs, having visited 115 to date.

Also Thursday, the state Department of Labor officials announced the agency has processed more than 80% of unemployment benefit applications filed since the coronavirus pandemic struck in mid-March – including more than 150,000 requests since programming upgrades to the system were launched last week.

“We know patience is running out for some as we get to our claims,” Westby told reporters during a late-morning conference call. “We do understand that it’s a financial crisis when anyone is laid off.”

The agency now has processed more than 327,000 of the approximately 402,000 applications it has received since mid-March. More than $230 million in benefits have been paid out over that period.

“That’s well over two years of normal claim activity in just a little over a month,” Westby said, adding that about 223,000 of the 327,000 applications processed so far were done manually, and another 104,000 were simple enough to be processed by the IT system.

The automated claims also were simple, said Westby, who called it a “big challenge” for an IT system centered on nearly 40-year-old, COBOL programming language.

After launching upgrades to those programs last week, quadrupling claims processing staff and expanding overtime, the department has lowered the average application turnaround time from six weeks to three. And Westby said it remains on pace to meet its goal of a one-week average turnaround by Saturday.

A second objective – releasing supplemental federal benefits for the unemployed – also remains on schedule to begin on Sunday, the commissioner said.

State assistance, which can run as high as $649 per week, will be enhanced by another $600 in Federal Pandemic Unemployment Compensation, labor officials said.

Congress directed states to provide this enhanced funding from March 29 through July 25 and Westby said his department expects to begin releasing that additional funding by Monday. 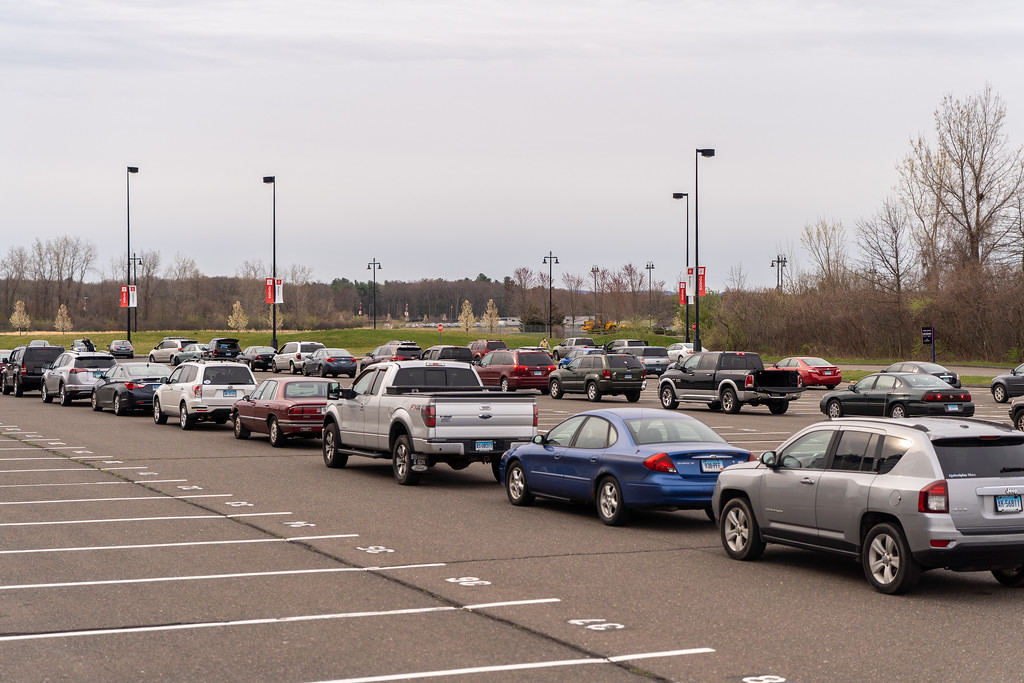 Cars begin lining up around 6 a.m. for Foodshare’s expanded food giveaway that begins at 8:30 a.m. As the ranks of the unemployed have grown, so too have the demands on food banks and soup kitchens. Photo credit: Andrew Janavey, Foodshare (Courtesy of CTMirror.org)

According to the U.S. Labor Department, forty-four states, including all New England states except Connecticut, have already implemented and started providing these new federal benefits.

Westby said all eligible recipients eventually will receive catch-up payments to cover the federal unemployment benefits owed between March 29 and April 27 – but it may take a few more weeks to get that processed.

The department also is scrambling to get other federal assistance out the door.

The Pandemic Unemployment Assistance program provides benefits for some who traditionally do not receive assistance: self-employed individuals, independent contractors and freelancers. The department is scheduled to begin accepting applications for this program next week and, state labor officials added, they expect benefits to go out shortly thereafter. The U.S. Department of Labor said 10 states have already started making these payments.

A third federal program, the Pandemic Emergency Unemployment Compensation, is a 13-week federal extension that will allow eligible claimants to receive jobless benefits after the 26-week limit on state payments has been exhausted. Department officials haven’t said how many Connecticut workers already have exhausted state benefits. The department expects payments through this program to be in operation by mid-May.

The state’s Unemployment Compensation Trust Fund, which held about $650 million in mid-March, is down to about $400 million and declining rapidly due to a “tsunami of claims,” Westby said.

State unemployment benefit trusts often go insolvent during recessions, forcing them to borrow additional resources from the federal unemployment trust. Connecticut officials already have said the state likely will have to borrow funds later this year.

Those resources eventually must be repaid, either through a special assessment on businesses or from other state resources.

St. Francis Hospital and Medical Center in Hartford, which belongs to Trinity Health Of New England, is the latest hospital to announce it is administering samples of blood plasma to enhance treatment of coronavirus. Lawrence and Memorial Hospital in New London, part of Yale-New Haven Health, and Hartford HealthCare had previously announced they were treating COVID-19 patients with blood plasma.

The studies will test the effectiveness of the antibodies within the plasma on critically ill COVID-19 patients who are on ventilator support.

“Donors are a critical component to this clinical trial and to getting one step closer to healing some of the most critically ill COVID-19 patients,” said Dr. Reginald Eadie, president and CEO, Trinity Health Of New England. “While there are currently … no vaccines and or proven therapies to fight this disease, this study allows us to tap into a treatment method that has the promise to be lifesaving.”

Plasma therapy has been used in the past to treat SARS, Ebola other infections. Plasma is the fluid part of the blood left over once the red and white cells and platelets each have been separated.

The trial is being overseen by the Mayo Clinic and Johns Hopkins, which recently received U.S Food and Drug Administration approval for this research.

Trinity Health is continuing to accept volunteers who are willing to donate blood plasma. Qualified candidates include individuals who tested positive for COVID-19 and have fully recovered from the disease.