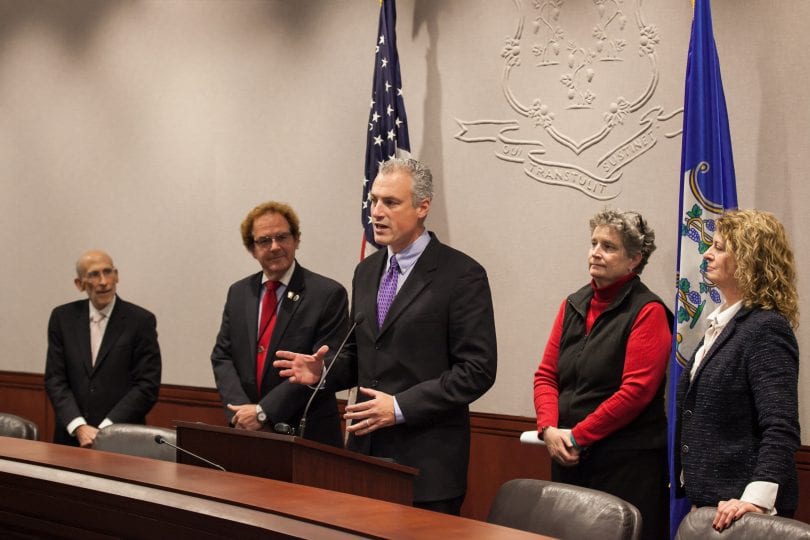 Consumer Counsel Elin Katz was joined by State Rep. Derek Slap and State Sen. Beth Bye and several other legislators at the Capitol Thursday for the introduction of West Hartford resident David Silverstone, whose role will be to help increase transparency at the MDC.

The selection of Attorney Silverstone is the culmination of an effort by Greater Hartford area legislators and advocates ensuring that consumers are well-represented in MDC proceedings and matters, such that the consumer voice and perspective will impact MDC decision-making for the benefit of the public.

Public Act No. 17-1, An Act Establishing an Independent Consumer Advocate for Metropolitan District of Hartford County Consumers, establishes the advocate position for MDC consumer interests, including as to issues impacting rates, water quality, water supply, and wastewater service quality. The legislation was championed by State Sen. Beth Bye (D-West Hartford) and State Rep. Derek Slap (D-West Harford), as well as Rep. David Baram (D-Bloomfield), and Rep. Tom Delnicki (R-South Windsor), among others. It is notable that Public Act 17-1 was the first item of legislation signed into law this session, which shows the priority that Hartford area legislators in particular gave to this effort.

The legislation calls upon Katz to choose the MDC independent consumer advocate, who will then operate independently on behalf of MDC consumers.

Katz noted Silverstone’s unique qualifications when announcing his appointment, stating, “Attorney Silverstone has more experience than anyone else in the state when it comes to establishing an independent consumer advocate office. He will bring needed transparency to the MDC process and provide a strong voice for MDC water consumers. Confidence in the water system is essential for both the community and the MDC.”

“I am excited by the opportunity to advocate on behalf of the consumers of the Metropolitan District Commission,” Silverstone said as he officially accepted the position. “My roots are in consumer advocacy and I bring those experiences and my knowledge of the water industry to this position. I look forward to meeting with, and learning from, the consumers of the district,” he said.

“The creation of the consumer advocate was part of the very first public act of the 2017 legislative session and was passed swiftly and unanimously by the legislature,” said Slap. “Today is another important step in strengthening the voice of MDC consumers. They deserve an independent advocate who will improve oversight, accountability, and transparency. Consumers should be able to have as much trust in the MDC’s governance as they do in its water.”

“I am so happy and proud that we have arrived at this day, and I think attorney Silverstone is an excellent choice,” Bye said. “I am counting on him to be a strong advocate for all of MDC’s consumers. We have an independent consumer advocate today because MDC’s customers refused to stand by when they saw issues of concern. Consumer voices matter, and when the community speaks out, it makes a difference.”

Silverstone will officially start his work as the independent consumer advocate on Jan. 1, 2018, although he is already meeting with members of the community and MDC officials to gather information on the issues.