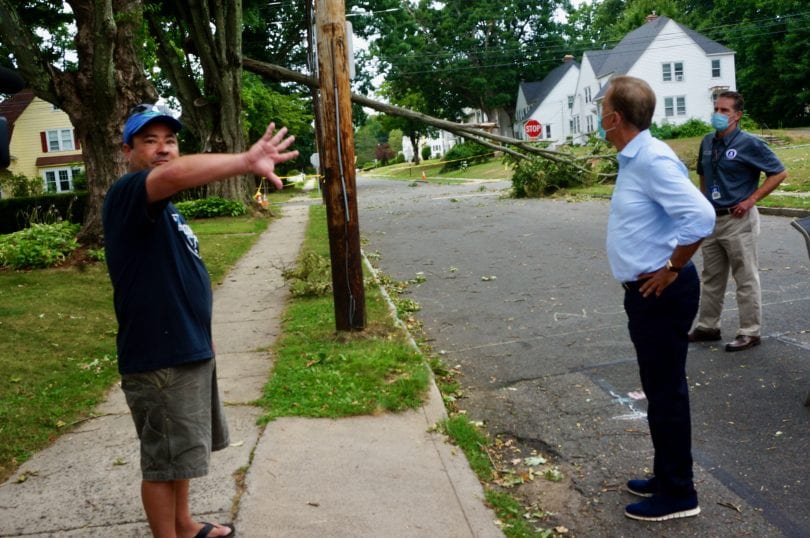 Frustrations continued to mount Thursday as hundreds of thousands of Connecticut residents and businesses remain in the dark in the middle of a pandemic.

Eversource announced Thursday evening it would restore power to a majority of its customers by the end of the day Sunday, but at 10 p.m. Thursday released the following information in a news release:

“Eversource estimates it will make significant progress by the end of the weekend and have its restoration substantially complete by Tuesday, August 11th at 11:59 p.m., with many customers restored before that time. Substantially complete means fewer than one percent of customers are still without power. More than 700 crews are working urgently to repair the widespread damage to the electric system caused by Tropical Storm Isaias. Significant numbers of additional out-of-state mutual aid crews are arriving Friday and will increase the available crew resources to 1,189. As of 9 p.m., the energy company has restored power to more than 435,000 customers since the storm began while operating under strict COVID-19 pandemic safety protocols. Approximately 480,000 Eversource customers in Connecticut remain without power, and Eversource will continue working around-the-clock until all customers are restored.”

Many United Illuminating customers will remain without electricity through at least Saturday. As of 2 p.m. Thursday, 73,000 UI customers were without service.

Eversource, which underestimated the number of outages that would occur, still has nearly 500,000 customers without power.

There are still “priority locations” without electricity operating on backup generation like sewage treatment plants, one third of the state’s nursing homes, and even the state Department of Labor, which is responsible for handling more than 300,000 unemployment claims.

Gov. Ned Lamont said there would be plenty of time to review what happened and how the utilities responded. He said his priority right now is to get people power.

Lamont requested asked regulators to assess the preparedness, the utilities’ response, and whether they should be fined for their actions.

The investigation comes a day after PURA Chairwoman Marissa Gillett said that Eversource “grossly” underestimated the number of outages they would experience during the storm.

Gillett said that based on the documents Eversource shared with the state on Monday before the storm, the company planned for an outage of between 125,000 and 380,000 customers.

At its peak there were more than 800,000 customers without power.

“I don’t think that Eversource planned for the worst,” Lamont said.

The governor echoed those comments during a visit to West Hartford’s Emergency Operations Center Thursday, after which he and Lt. Gov. Susan Bysiewicz, state Sen. Derek Slap, state Rep. Tammy Exum, and town officials visited an area of town hard-hit by the storm.

Eversource, which covers most of the state, said Thursday there are 516 broken poles, 3,111 downed spans of electrical wire, 174 damaged transformers, 2,225 trees to be removed and 716 blocked roads.

Eversource President of Regional Electrical Operations Craig Hallstrom said Thursday that they have 700 electrical restoration crews and plan to have 1,200 crews by the end of the day Friday.

“We will have the right number of crews to tackle this outage as quickly as possible,” Hallstrom said.

Hallstrom said they have already repaired the damage to the transmission system and are working on making sure everything is safe.

“I’m very confident that by then end of this weekend we will have a very large chunk of the customers restored,” Hallstrom said.

He said once they saw what was happening with the storm “we ramp up and adjust accordingly.”

And he expects that Connecticut residents who are without power will pay for the cost of restoring it.

“At some point, the cost of the storm will go into customers’ bills,” Hallstrom said.

In a statement late Thursday night, Hallstrom said, “We know how urgently our customers need power and we will work tirelessly – with every crew and resource we can muster – until they all have power again. With crews from Canada, Michigan, and Massachusetts working alongside our Eversource crews, we remain laser focused on this restoration and are committed to staying on the job around-the-clock until every customer has power back. We are grateful to our customers for their patience and recognize the tremendous inconvenience that being without electricity presents during the ongoing pandemic and hot days of summer.”

He said he plans to introduce legislation for a September special session that will hold utilities responsible for their inadequate response.

He said the system was neglected for 20 years.

“We need to fix this,” Needleman said. “What did we get for our money? I can’t tell you.”

Needleman wasn’t the only elected official upset with the response.

“More than 8,000 people in East Hartford don’t have power as of Thursday afternoon, and nearly 60 percent of East Windsor Eversource customers haven’t had power in two days,” Sen. Saud Anwar, D-South Windsor, said. “These aren’t numbers; these are people. People who are struggling with medical equipment, food security, high summer heat and frustrating humidity, to name just a few possible problems they face. What’s worse is many more are likely struggling to work from home with the requirements of the COVID-19 pandemic, and what’s worse than that is they don’t know when that power will return.”