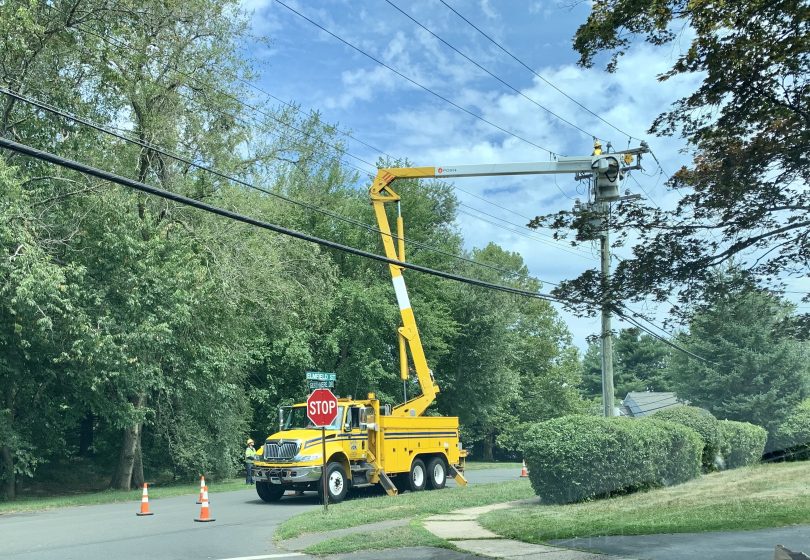 Crews are out in force in West Hartford Friday, including this crew in Elmwood, working on power restoration. Courtesy photo

A large number of Eversource crews were at work in West Hartford on Friday, with significant progress expected to be made by the end of the day. 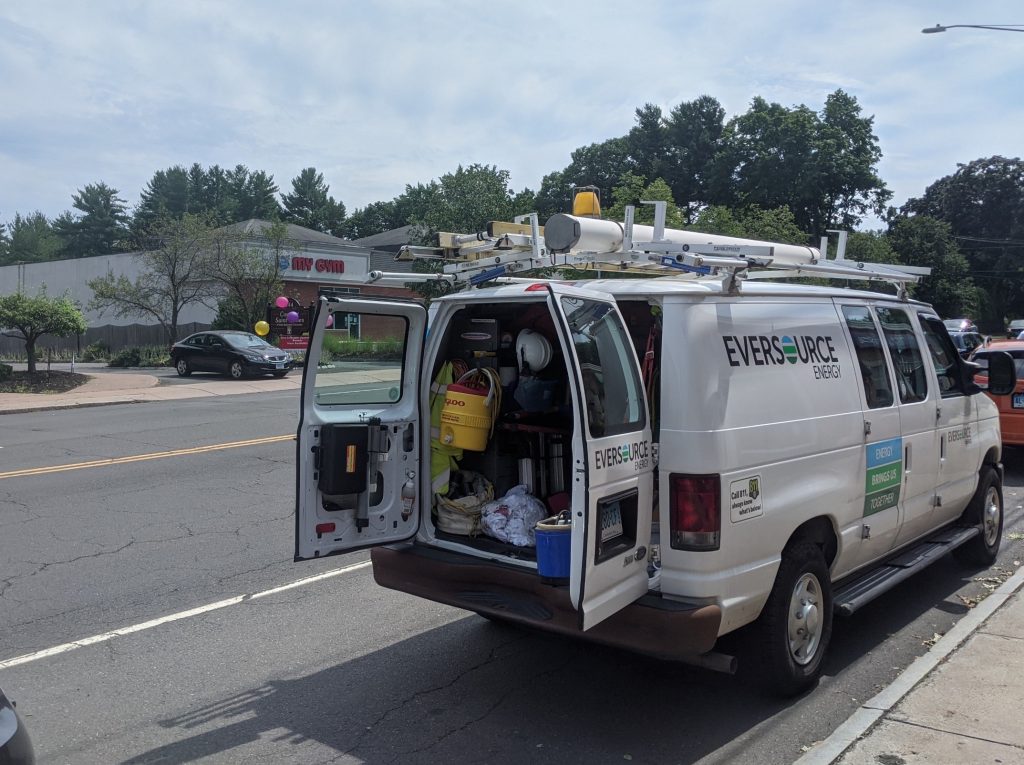 Eversource crews were getting to work Friday afternoon on South Main Street at the intersection with Sedgwick/Park roads where power remained out. Photo credit: Tom Kassan

More than 1,000 Eversource customers in West Hartford woke up Friday morning with their power restored, and Town Manager Matt Hart and Fire Chief Greg Priest, who is the town’s emergency management director, anticipate much more progress to be made throughout the day and into Friday night.

As of 2 p.m., 402,081 Eversource customers (31.38%) statewide remained in the dark, and 10,995 of those customers were in West Hartford (38.17% of the town’s customers). While the number without power is still significant, in West Hartford it represents a drop of 14 percentage points from the peak of the outage Wednesday morning.

“Today Eversource has a number of crews in town and they are focused on power restoration in earnest,” Hart said mid-day Friday. 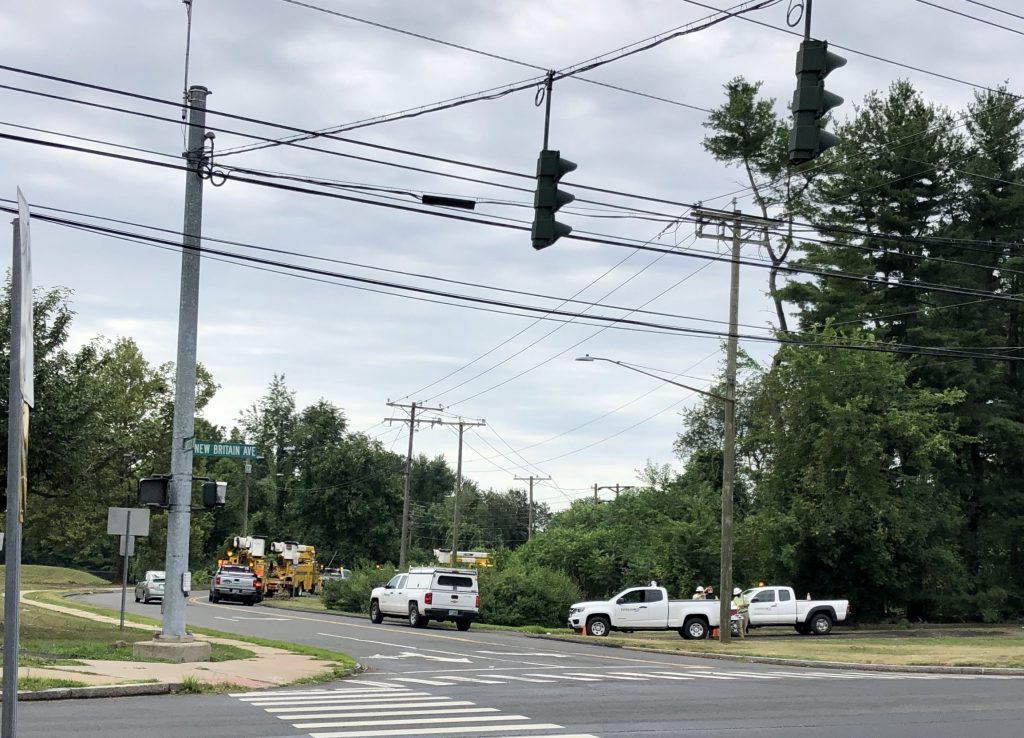 West Hartford Public Works Department and crews working on behalf of Eversource had a briefing near Wolcott Park Friday morning, and a large number of crews will be working in West Hartford throughout the day and night. Photo credit: Ronni Newton

While he could not make any promises of power being restored to specific neighborhoods, Hart said that crews were deployed in force throughout Elmwood and other neighborhoods south of Farmington Avenue. The area north of Farmington and south of Asylum Avenue, west of Elizabeth Park, is also an area of focus on Friday, as is the Park Road area, Boulevard, Ridgewood, Tunxis, Briarwood and Waterside Lane.

The goal is to have power restored in many of those areas by the end of the night.

Hart said while Eversource hasn’t given him a specific estimate, based on the information he has received regarding restoration plans for the day, “it will be thousands of customers.”

Hart also said that West Hartford officials have been pushing Eversource hard to get their app working properly so that customers can get an idea of when power might be back. The app has been responding “evaluating” to anyone who requests the status of their restoration, although Hart said he had been told that customers who are registered should still be getting a text automatically when the power is actually restored. 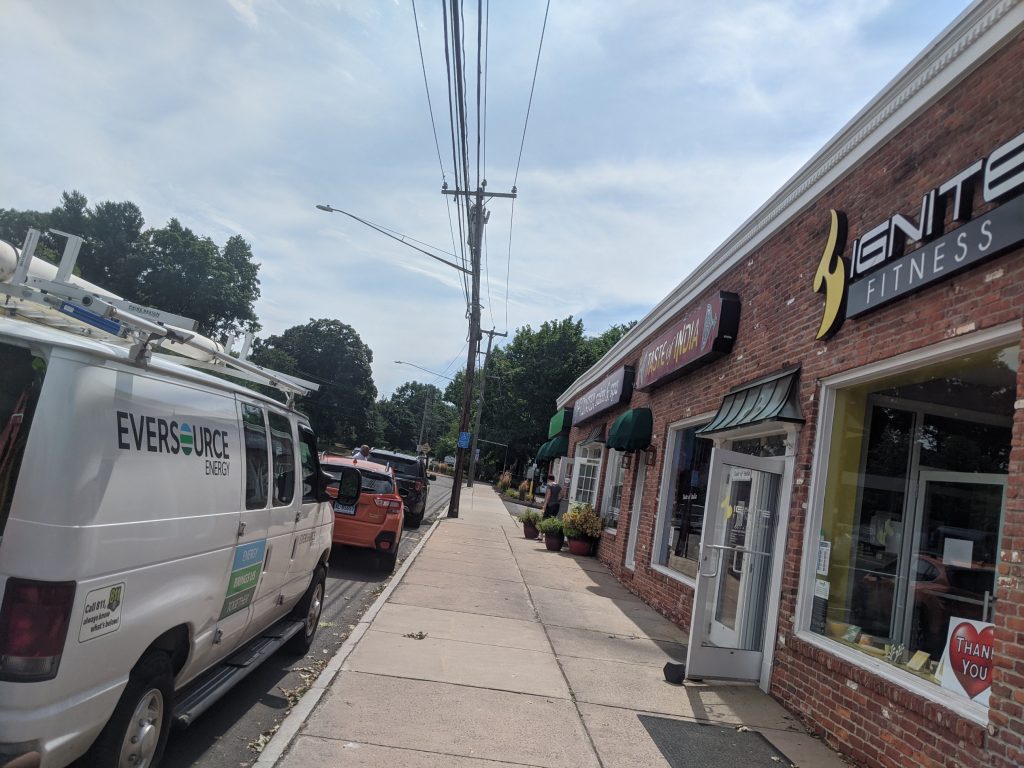 Tom Kassan, managing partner of Physical Therapy and Sports Medicine, spied this truck outside his clinic on South Main Street Friday afternoon. The business has remained open despite a lack of power. Photo credit: Tom Kassan

While the focus Friday is on restoration, Hart said that some crews are also continuing to remove trees entangled in power lines that have been blocking roadways.

“They are trying to get [to areas with] the highest volume of outages,” Priest said, where repairs can bring back service to a large number of customers at once.

The large tree that blocked New Britain Avenue had been removed, but traffic signals remained dark from New Park Avenue (where the signal was working) past Westfarms Mall Friday morning.

Many crews have arrived from out of state, Hart said, and are working in 16-hour staggered shifts. They have been meeting and receiving briefings from Director of Public Works John Phillips, and Hart praised the work that Phillips has been doing organizing the effort.

“The town is applying as much leverage as we can,” Priest said, and although they are powerless to some extent, “we’re certainly trying.”

Priest said he knows folks are frustrated, and representatives from the fire department, including Community Support Officer Troy Shipley, have been connecting with residents across town to do what they can to assist.

“We don’t want this to be another 2011 storm,” Priest said, referencing the freak October snowstorm that left 99% of the town in the dark for as long as 11 days. “We at least want people to feel better.”

Tuesday, Aug. 11 is primary day in the state, as of Friday morning six of West Hartford’s nine polling places were still without power, Hart said. Eversource said in a statement Thursday night that they have committed to having restoration “substantially complete” (less than 1% still out) by that date – but by 11:59 p.m.

“We have had discussions with Eversource, and they have committed in writing that they will have all polling places done” in time for polls to open at 6 a.m. Tuesday,” Priest said. 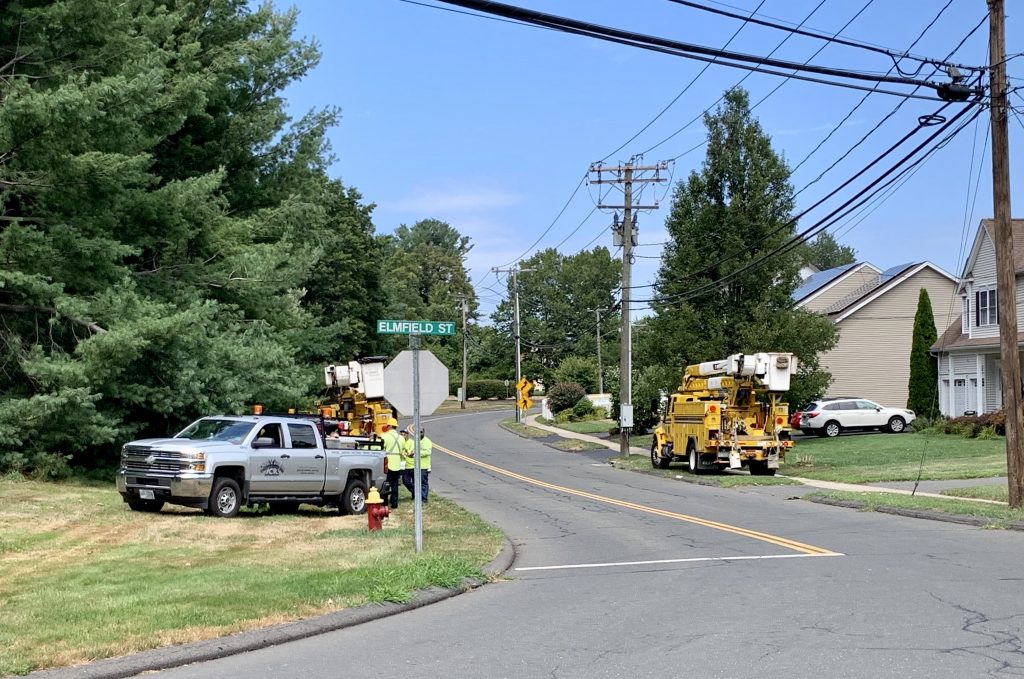 Crews are out in force in West Hartford Friday, including this crew in Elmwood, working on power restoration. Courtesy photo