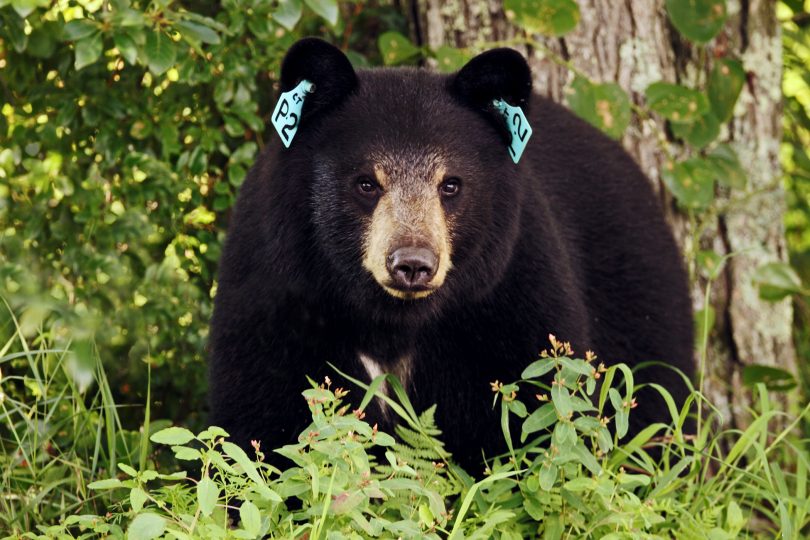 A common misconception is that a tagged bear is a problem bear, and a bear with two ear tags was caught on two different occasions because it was causing problems. Actually, every bear receives two ear tags (one in each ear) the first time it is handled by DEEP. Most tagged bears have not been caught as problem bears, but rather as part of a project researching the state’s population. Photo credit: Paul J. Fusco/DEEP Wildlife Division (we-ha.com file photo)

The Department of Energy and Environmental Protection (DEEP) has reported an unprecedented number of bears entering homes in 2020, and in West Hartford there have already been nearly 300 sightings of bears reported this year.

Bears are hungrier than ever at this time of year, and the Department of Energy and Environmental Protection (DEEP) has issued another reminder, and has even created a YouTube video, urging residents to do their part to and providing some best practices to reduce dangerous interactions with black bears.

According to DEEP, as of Sept. 10 there have already been 42 reports of black bears entering Connecticut homes this year – more than the total in any prior year and on track to be triple the average for 2018 and 2019.

Sightings of and interactions with black bears have continued to increase, as have complaints and requests for assistance. 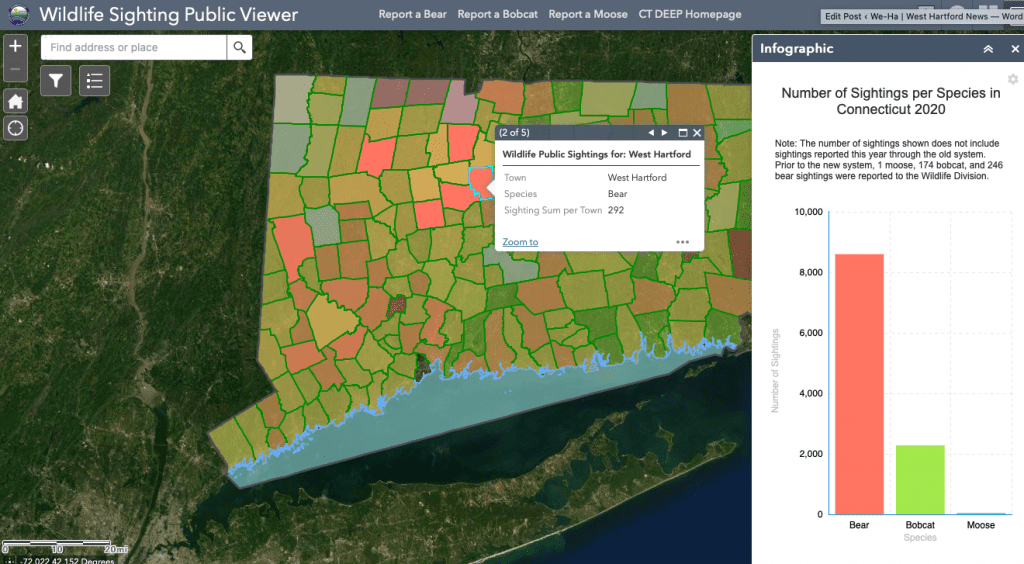 Bears have been seen in all parts of town, not just in neighborhoods that border the MDC reservoir property. In late June, a bear was photographed strolling through Elizabeth Park. They have also been seen in yards near West Hartford Center and on Prospect Avenue near the Hartford line.

In early June, a West Hartford resident shared a video of bear cubs “dancing” around her long-empty bird feeders.

While interactions between people and bears have not been reported in West Hartford thus far this year, DEEP has noted that they are on an unprecedented rise in some communities where bears have entered homes or injured leashed as well as unleashed dogs.

In autumn, black bears increase their food intake, adding fat reserves to get them through the winter, when they typically fast and reduce their metabolism.

Bears can become habituated and food-conditioned when they have regular access to “human-associated food” including birdseed, trash, and pet food, which are often easier to find than other food sources. That in turn leads to more conflicts with humans, damage to property, pets, and livestock, and greater risk to public safety.

“Everyone can be a good neighbor and take steps to reduce encounters and potential conflicts with bears,” DEEP said in a press release, noting that the removal of attractive food sources such as bird seed and unsecured garbage are critical.

“Black bears should never be fed – either intentionally or unintentionally,” DEEP Wildlife Division Director Jenny Dickson said in a statement this week. “Bears that are attracted to homes by easily-accessible foods lose their fear of humans. It is important to remember to keep your grill clean and garbage secured and indoors until collection day to avoid giving bears a tempting snack. Bears that are rewarded by easy meals spend more time in neighborhoods and near people, increasing risks to public safety, the likelihood of property damage, and the possibility that the bears may be hit and killed by vehicles.”

If you do encounter a bear either in your yard, or while hiking, the best response is to yell or make other loud noises, Dickson said, and if you are in your yard, go inside the house, garage, or other structure. Do not attempt to get closer to the bear, and if it fails to retreat on its own, leave the area slowly.

If you have nowhere to go and the bear continues to approach, you should go on the offensive by shouting, waving your arms, and throwing sticks or rocks, DEEP suggests.

Dogs should be kept on a short leash while hiking and should not be allowed to roam free. This is for the safety of you, your dog, and the bear.

Bears that appear to be aggressive to people should be reported immediately through DEEP’s 24-hour dispatch line at 860-424-3333.

More information can also be found on DEEP’s “Living With Black Bears website.

DEEP continues to monitor the black bear population and also asks that those who see bears report them through the DEEP website or by calling the Wildlife Division at 860-424-3011. If available, information that can be provided about the color of ear tags or the number on the tag is especially valuable.

Every bear receives two tags – one in each ear – the first time it is handled by DEEP, as part of a research project. The tags do not mean that a bear is a problem.

The color of the tag corresponds to the year. In 2020, bears have received blue tags. Bears received green tags in 2019 and orange tags in 2018.