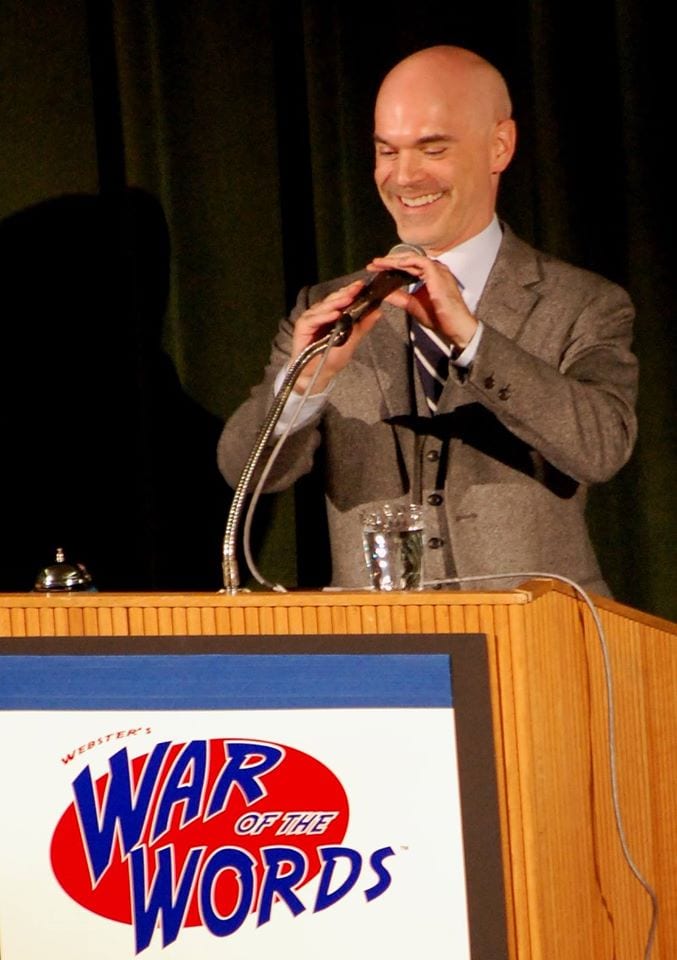 The Noah Webster House and West Hartford Historical Society will once again merge language, fun, and food at the popular ‘War of the Words’ benefit game show.

What do the words “surreal,” “nexus,” “complicit,” and “gaffe” all have in common? If you have stayed “woke,” you know they have all been trending in the past few months.

Join the Noah Webster House & West Hartford Historical Society for a celebration of words and language on Saturday, April 22, 2017, at the 8th annual Webster’s War of the Words! If that is not cause enough to “humblebrag” around town, we just don’t know what is!

SKY Investment Group is proud to present Webster’s War of the Words – the definition of dinner and a show. Emceed by NBC CT’s Brad Drazen, this signature fundraiser will include dinner by Rizzuto’s, unlimited beer and wine by City Steam and 90+ Cellars, fabulous silent and live auction items, and the main attraction – the game show!

Words are more important than ever. If you’ve been following current events, words like “wiretapping,” “vindicate,” and “feminism” might take on a special meaning for you. Then there are old-fashioned words like “snollygoster” and “elderflower” that have recently made a come-back.

At Webster’s War of the Words, Merriam-Webster’s Editor at Large, Peter Sokolowski, will test the knowledge of two teams of local celebrities – and the audience – in a lively and interactive battle of words and wit.

The event, now in its eighth year, is moving to a new location. War of the Words will take place from
6-9 p.m. at Congregation Beth Israel, 701 Farmington Ave. in West Hartford.

The museum’s Executive Director, Jennifer Matos, says the new space “is in one of West Hartford’s most beautiful historic buildings” and that it will offer room for a bigger event. “We’re excited to move War of the Words to Congregation Beth Israel. It has a beautiful stage for the game show and the space will allow us to host a bigger audience,” she said.

In addition to dinner, drinks, and the show, the evening will include both silent and live auctions. Live auction items will include a week in Nantucket, tickets to Hamilton on Broadway, and an African safari. Each basket in the silent auction is inspired by a book in keeping with the museum’s mission to promote literacy.

The advance ticket price is $60 ($55 for members). After April 19, all tickets are $75. Tickets are available at noahwebster.yapsody.com or by calling 860-521-5362 x10. Proceeds from this fundraiser will support the Noah Webster House & West Hartford Historical Society’s educational mission.

Webster’s War of the Words is presented by SKY Investment Group. Gold sponsors are Tsunami Tsolutions and Reid & Riege, P.C., and the silver sponsor is Ziegler. 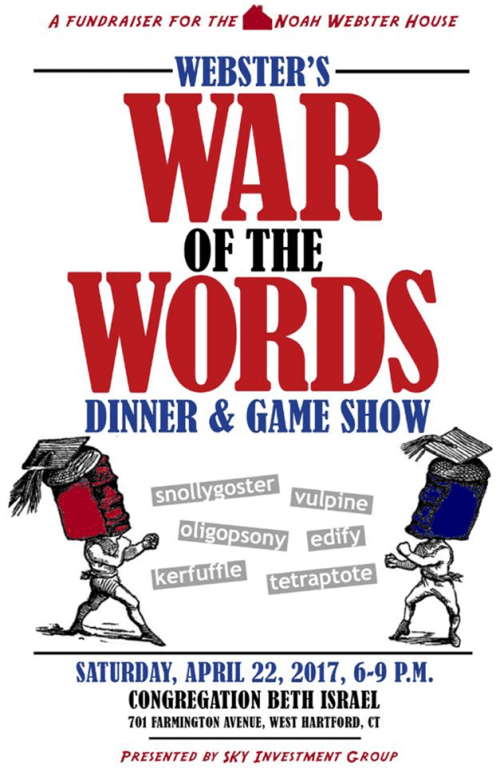 The Noah Webster House & West Hartford Historical Society is a cultural destination where citizens can learn to understand and appreciate the past. The museum preserves the birthplace of Noah Webster, the founding father, educator, author, and lexicographer who taught generations of Americans what it means to be American. This National Historic Landmark is also a repository for the history of West Hartford, the community that molded Noah Webster’s future and is still thriving over 250 years later. The historic house and exhibit spaces are open daily 1 until 4 p.m. For information on the museum’s extensive school and public programs, please visit www.noahwebsterhouse.org or call (860) 521-5362.