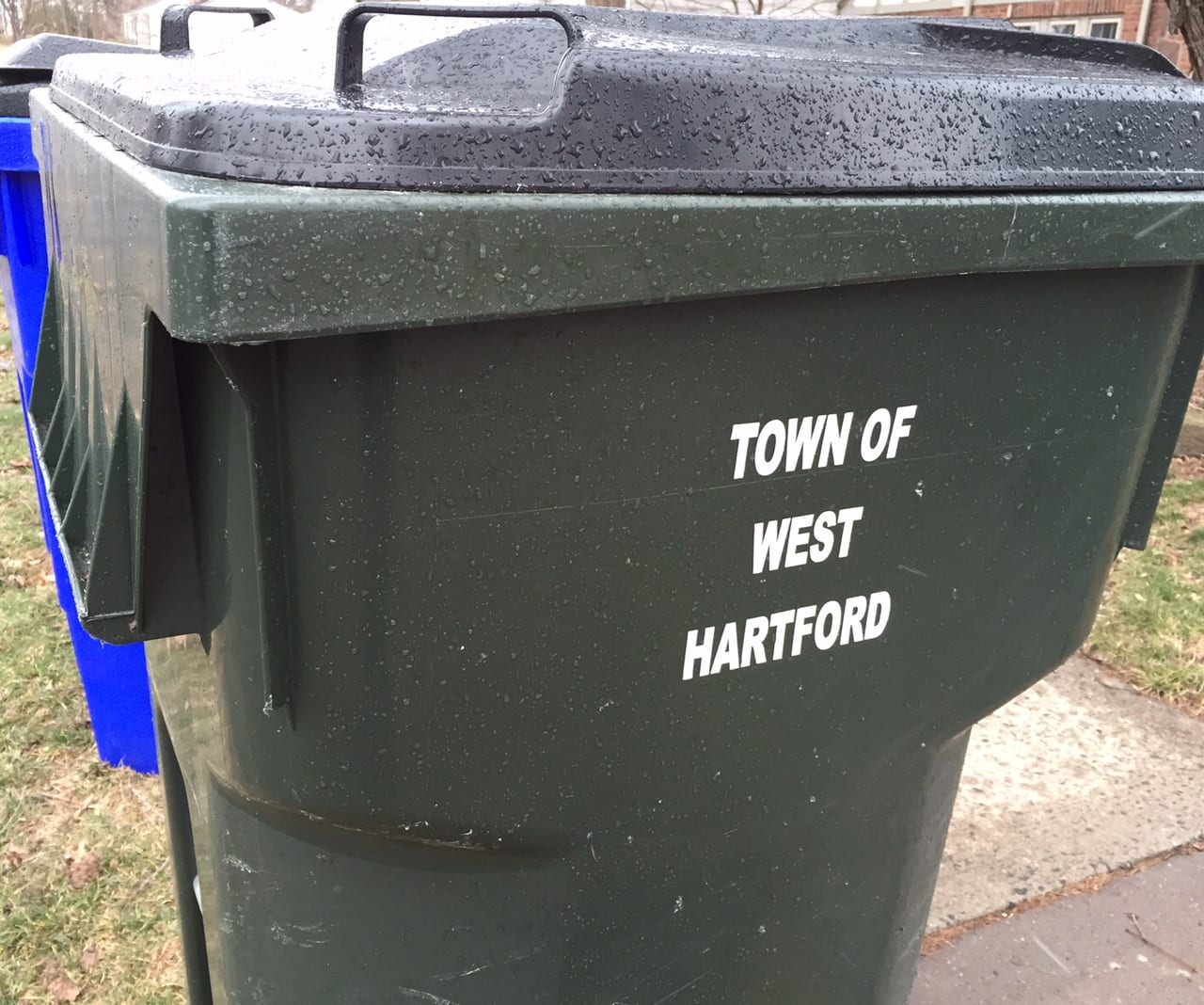 Members of the West Hartford Town Council met with representatives from the Department of Energy and Environmental Protection (DEEP) to hear how other communities ‘save money and reduce trash’ to boost recycling and meet waste diversion guidelines.

Editor’s Note: This article appears courtesy of a partnership with The West Hartford Press. To request a copy of the town’s weekly newspaper of record, visit turleyct.com.

Town Council members recently heard a presentation regarding a Save Money Reduce Trash (SMART) waste management model and discussed the potential benefits as well as the concerns they have with making the switch.

Director of Public Works John Phillips has long told the council that a systematic approach to waste reduction and management that is supported by all levels of town government is necessary.

Alternative programs to address the “trash crisis” have been explored, including a SMART program. In January 2017, Phillips hosted a public information session at Town Hall to explain and answer questions about the program, and more than 100 residents attended.

The goal is to divert 60 percent of waste into recycling, composting, or reuse by 2024 – a sizable increase from the current diversion rate of 35 percent.

If that new rate is not reached by that time, the state will have to ship up to one-third of its garbage out of state, driving up disposal costs by 60 percent.

The town began offering weekly recycling – rather than biweekly – last summer and ran an experimental food-waste collection program in the fall.

With a SMART program, residents would purchase 30-gallon municipal trash bags at local stores where they customarily find trash bags. A standard price in other communities using SMART is $2 each.

As many or as few are needed could be purchased, depending on the amount of trash generated by each household.

Although DEEP has launched an education campaign to increase recycling, research shows that education alone will not result in significant increases and must be used to complement other initiatives like SMART, Nelson said.

“With SMART, the disposal of trash becomes more of a utility model where people pay for what they use,” Nelson said. “SMART provides an individual price signal that encourages recycling. … Residents who recycle or don’t generate a lot of trash should end up paying less annually for bags than they are currently paying out of property taxes. The current state is more of a hidden tax because you have no idea how much of what you pay for property taxes goes to trash. SMART makes the cost more transparent.”

Brown explained that the SMART program – which incentivizes residents to think more intentionally about waste disposal – has a strong presence in the northeast. In Massachusetts, for example, 41 percent of municipalities use SMART with an average waste reduction of 44 percent. Unit-based pricing for sold waste is mandatory in Minnesota, Oregon, Vermont and Washington, Brown said.

The 44 percent municipal solid waste reduction is the average for all SMART programs, though many towns, such as Waterville, Maine and Dartmouth, Mass. see higher numbers – those towns saw a 53 percent and 59 percent decline in waste, respectively.

With SMART, the cost of trash bags helps pay for trash collection, which is conducted on the same day as always, as is recycling collection. With SMART, the average West Hartford home will use less than one 33-gallon bag per week, Brown said, as the average disposal will be 17.84 pounds per home weekly and a 30-gallon bag holds 21.25 pounds of trash.

Brown argued that residents using the average number of SMART bags would pay less for solid waste with SMART than with the current system as the baseline tax for trash disposal is $168 and the cost of regular trash bags is $27 equating to $195 annually.

Under SMART, the baseline tax for trash disposal would be $69 with an average cost of $88 annually for SMART bags, equating to an annual average cost of $157. Residents could spend even less when they dispose of less trash, she said. Instead of paying a flat tax fee, residents control the portion of their expense that comes from bag fees and, arguably, pay a lesser tax with specific regard to waste management.

Switching to SMART also saves the town money, Brown said, as currently trash disposal is supported entirely by the general fund, but under SMART the town will see a tip-fee savings and revenue from the SMART bags. The program is fairer for residents, more fiscally responsible, and less dependent on property taxes, she said.

Over the next 10 years, West Hartford would realize more than $6.5 million in tip fee savings, she said, with an annual benefit to the town of $2,232,247 when bag revenue is included.

There will also be a reduction in trash and an increase in recycling as residents are motivated to dispose of less trash to save on expenses, which is a significant goal of the program.

Brown said studies have proven SMART to be the single most effective way to reduce trash while also saving money. Hundreds of programs have been implemented around the world and only a handful were discontinued – including two in Connecticut – although neither failed but ended due to political pressure.

Phillips has examined options for the town for years now and recently shared potential changes with the Council’s Community Planning and Physical Services committee.

In addition to SMART, other alternative solutions that Phillips outlined in a memo include having residents subscribe to private service providers of their choice and eliminating the town’s curbside waste disposal services, which could cost residents $350 to $400 annually, to franchise the town program and bill residents directly from a contracted town service provider – an option Phillips said would be less costly to residents than a private subscription fee but would provide limited results to reduce waste – or to simply enhance existing services by offering more education, enforcement, more ways to recycle and expanded offerings for organics, yard waste and other waste collections. Under the last option, waste collection would be bi-weekly while recyclables and organics would be weekly.

In his memo, Phillips concurred that SMART is the fairest, most efficient and economic strategy to reduce waste, as well as DEEP’s “highly recommended solution to waste reduction.”

Town Council members were skeptical of the talk of savings.

Ben Wenograd said the numbers were “not very compelling” and Republican Minority Leader Chris Barnes questioned whether it was accurate to look at bag sales as “new revenue” to the town when it’s a net cost to the residents so the town is still collecting from residents whether it be via taxes or otherwise.

Brown said it is a more equitable distribution of cost since, although there is still taxpayer expense, it isn’t levied flatly.

She reminded the council members that, in addition to a fair distribution of the cost burden, a goal of the program is waste reduction.

“To get that dramatic drop in trash, you need a little pinch,” she said with regard to the cost of bags. “You need that little pinch to get that behavior change. Education doesn’t really do it.”

“Right now [waste management] is a self managed free for all and we just write the million dollar check,” Phillips said.

Dallas Dodge pointed out that some families will likely see a significant savings while others might go above the average need and expense for bags.

Mary Fay noted that residents will expect a tax rebate since the revenue from bags would be contributing to covering the cost of waste management.

A tax decrease would be minimal, though many of the council members noted that taxes likely wouldn’t be decreased at all, but the tax revenue could be repurposed to provide services residents currently seek without needed a tax increase to implement them.

One such service would be curbside yard waste collection.

“I think West Hartford could be served well by an every other week yard waste collection,” Mayor Shari Cantor said. “People need to know we’re trying to bend the cost on the waste stream and be more environmentally responsible. This is the real crisis.”

All council members agreed they would need to be as transparent as possible with residents if a change to SMART was made that any savings would be a diluted one used to provide a different service rather than one directly realized in the wallets of taxpayers.

“We can’t go out and pitch this as a savings,” Wenograd said, though Dodge noted, for example, elderly taxpayers who now pay the same rate as families of four for all services including those they don’t use – such as schools – will now have the opportunity to pay by use for trash disposal and pay less than that larger family.

DEEP staff member and West Hartford resident Diane Duva, one of just a few members of the public at the meeting, praised the town for considering a switch to SMART.

She said Connecticut is a leader in many types of recycling and waste management changes but not in unit-based pricing.

“I’m really thankful West Hartford might be a leader in this,” she said. Any shift in cost burden from taxes to bag fees is “money being liberated in the general fund,” she said.

“Yes, that’s money residents are not going to see but that is liberated to be used for education and I would far prefer that that money be used for education or senior services than on trash,” she said. “This is about controlling future costs and not having to raise taxes … to pay for more trash collection.”