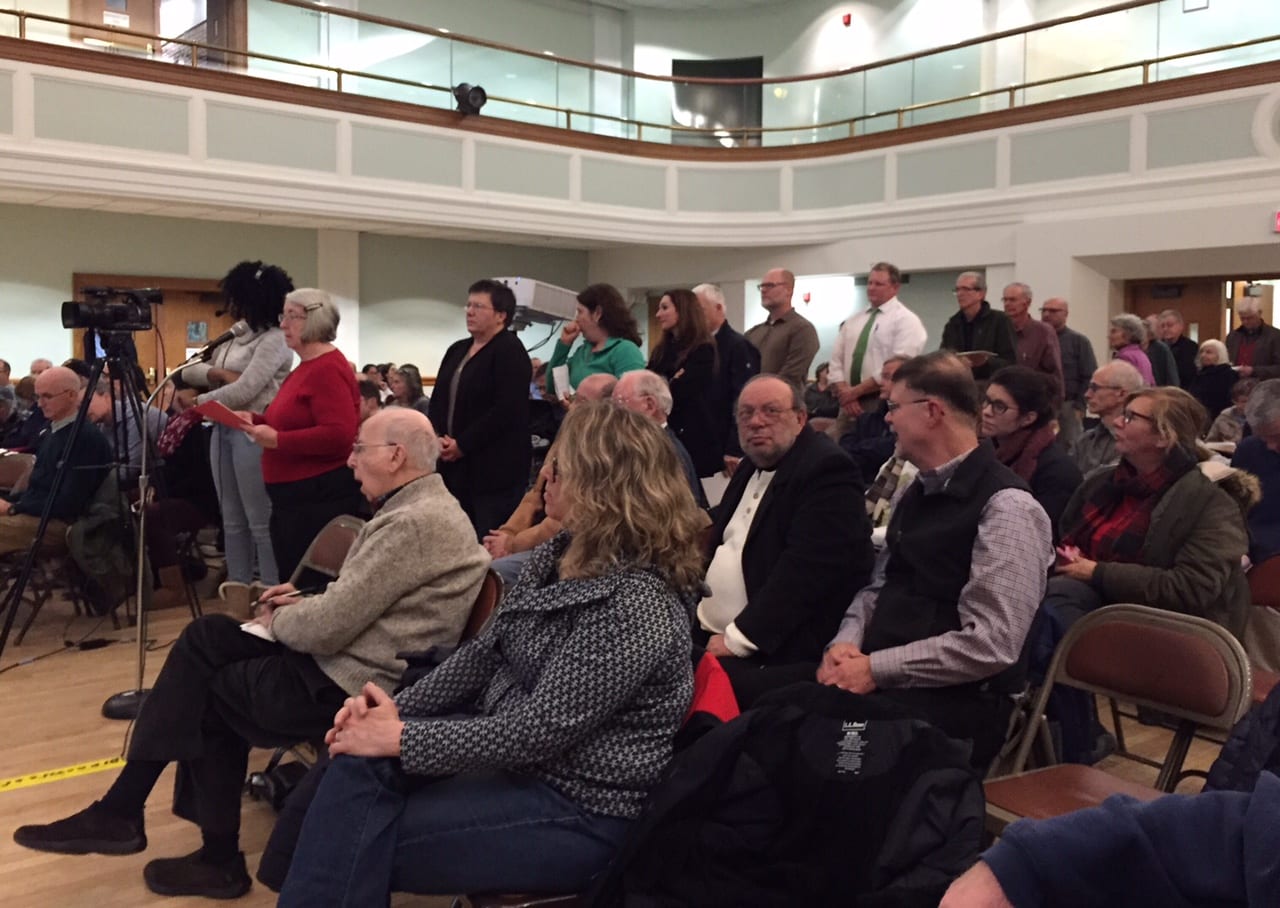 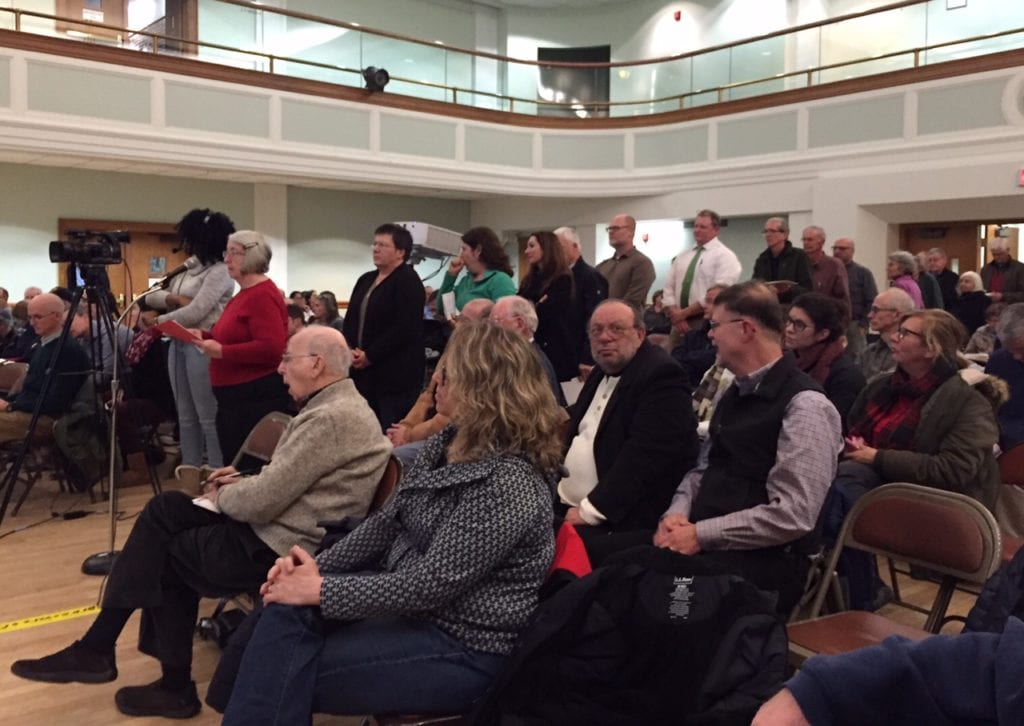 Director of Public Works John Phillips, along with WasteZero Vice President of Municipal Partnerships Kristen Brown, presented a thorough overview Wednesday night of what a “Save Money and Reduce Trash” (SMART) program in West Hartford might look like and what the financial considerations of implementation would be, followed by a spirited question and answer period with more than two dozen residents who lined up to speak.

An estimated 140 people attended the session at West Hartford Town Hall, the first of three public meetings that will be held to inform residents about the SMART program. Phillips said he has spent the past two years becoming educated about the program.

Initial reactions to the proposed program were mixed, with some residents opposing paying more when they are already good recyclers, some understanding that there is a trash crisis and this is the best solution, and others calling the program a hidden tax. 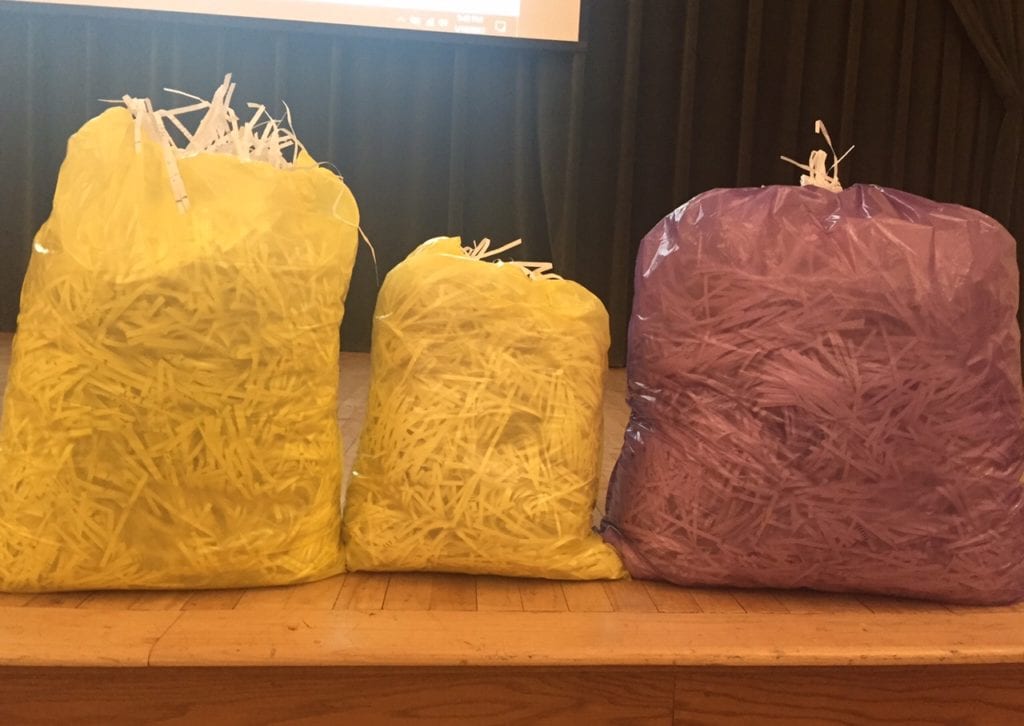 West Hartford needs to reduce its waste, and to achieve that is considering a transformation of the funding for trash removal. As part of SMART, 30-gallon municipal trash bags would be sold for $2. Bags would be available in grocery, drug, and other stores where residents typically purchase plastic trash bags.

Brown said that her calculations indicate that the average West Hartford residence would use 0.9 bags per week.

A tall kitchen bag (the 13-gallon size that fits in most standard kitchen trash barrels) would cost $1.25, and smaller bags would cost $0.80. The town would receive the money from the sale of the bags, and that in turn would fund a portion of the trash removal budget.

The municipal bags would then go into existing trash barrels, and curbside collection of the green barrels would not otherwise be changed. WasteZero Vice President Stephen Lisauskas, who also attended Wednesday’s meeting, said that the trash collection trucks would be equipped with camera and sensors that could determine the colors of the bags, and an automated system would be put in place to ensure that residents comply with the SMART program.

Phillips said that a trash crisis is looming, and while West Hartford will have a contract in place for disposal of its trash through 2024, capacity in the state is shrinking with the closing of one incinerator. He said he doesn’t know where the trash will be able to go after 2024.

Even though the town has a contract with Covanta for disposal, Phillips said the cost will likely escalate. He said that Covanta told him that “they would talk” and he would receive more information in November. “They’re not going to call and say the price is going to go down,” Phillips said.

West Hartford currently pays $66 per ton in tip fees, and that is projected to increase to $80-$100 per ton. The town generates approximately 20,000 tons of trash each year.

Phillips said that some people say education about recycling will help reduce that volume, and some residents who spoke Wednesday reiterated that. “We’re not going to educate ourselves out of this … everything has gotten lighter, smaller, and we still hover around 20,000 tons,” Phillips said. The town is stuck at a 27-30 percent recycling rate, but the state mandate is to increase the diversion rate to 60 percent by 2024.

“Let’s treat our waste like the utility it really is,” Phillips said. “We’re very good at collecting it and I understand from a residential perspective that it’s not a broken system.”

Trash is a “linear expense,” Phillips said. Tax dollars pay for it and then it’s burned. Recycling, he said, is circular, creates a whole new market, and is a better use of taxpayer dollars.

Phillips knows that West Hartford’s bi-weekly collection is insufficient, and said that the tax savings could be used to implement weekly recycling. Food waste recycling is something that is on the horizon as well, he said.

Brown provided statistics about unit-based waste management programs that have been implemented in other towns and cities where trash generation has dramatically dropped as soon as the program begins. More than 40 percent of Massachusetts uses it, and it’s mandatory in Vermont and about to be implemented throughout Rhode Island. Nationwide nearly 7,000 communities use unit-based pricing and it’s very common throughout Europe.

Bob Moylan implemented a highly-successful SMART program in Worcester, MA, more than 20 years ago. The retired public works commissioner told the audience that the program works and is the most effective way of reducing trash generation. “That little pinch of buying the special bag is going to make [residents] think.

Resident Meg Sheehan said she favors educating people first, starting with the households that have two trash barrels. “This feels like a penalty for those who are already doing the right thing,” she said. Sheehan said she would also like to see a line item on the bill showing the tax impact for complete transparency.

Douglas Waterston said he worries that this would be a “regressive tax” on young families that generate more waste.

Theresa Battaglio said she already has to pay someone to vacuum her leaves and to snow blow which she can’t do herself because of back problems.”I pay to go to Starbucks and park my car and you say I’m going to have savings. I want commitment from the Council that my tax is going to go down,” she said, and she would put that money aside in a pot to use it to buy bags.

Chris Nelson, who is a member of the Clean Energy Task Force, said that “trash is a utility and should be treated as one.” People would not want their energy costs to be paid for through taxes because there would be no personal control or reason to seek efficiencies. “Adoption of SMART would put in place the individual signal that’s missing” and would also be a cost saving to the town.

Jesse Samuels said he would like to see the town expand facilities to deposit recyclables to other areas of town like Bishops Corner because a lack of facilities dis-incentivizes people to get rid of waste. He also expressed concern about balancing waste reduction with use of water to make sure recyclables are clean.

Jaen Andrews said she feels like this is an additional cost which doesn’t make her happy but thinks “what’s really missing is education. She said there needs to be a better way about finding out about opportunities like textile recycling and does not find the town’s website useful.

“This is important not just for financial reasons,” said resident Judy Allen. “I tend not to change my behavior unless someone says you have to do that. This is an opportunity for us to do more about living sustainably and environmentally responsible,” she said.

“Why would we not want to take control of our future?” asked Diane Duva. The questions and comments were “heartfelt and meaningful,” she said, and major changes are always hard at first. “This isn’t about getting a tax rebate. This is about giving the town an ability to repurpose what would be wasted.”

Dave Peterson said it is “disingenuous to say this is making us green. This is about saving West Hartford money.” He refuted the savings that Brown had outlined and said that buying a bag is a tax, and we will get less for our tax dollars. However, Peterson added that he would accept it as a tax increase “for the sake of saving the town that I grew up in – one of best towns in America.”

“This is not a green issue. It’s a cost issue and a ‘what are we going to do with it’ issue,” Phillips said after the meeting.

SMART is still in the concept stage and Town Manager Ron Van Winkle said he would like to show it as an option in the next fiscal year budget but there are no plans yet to implement it.

There are two more pubic meeting to discuss SMART:

Click here for more information about the program. A link to Brown’s PowerPoint presentation will be also added once it has been posted on the town’s website.